The announcement of Terry Bogard for Super Smash Bros Ultimate was one which took everyone by surprise upon its unveiling at the September Nintendo Direct. Nestled between announcements of Xenoblade remasters and more, we learned that the previously-revealed Banjo & Kazooie would be immediately introduced into the game later that day alongside the news that this character was on the way. While the Fatal Fury franchise, indeed, SNK’s important role within gaming history, makes Terry Bogard a perfect pick for a game like Super Smash Bros Ultimate, it would be fair to say that many people either don’t recognize the character or don’t know much about them because of their reduced relevancy within a modern gaming landscape that mostly left SNK behind. Who is Terry Bogard? Why did Masahiro Sakurai choose them for Super Smash Bros. Ultimate and, most importantly, how will the character fit within the already massive cast of Nintendo’s popular party fighting game? In a special 45-minute Smash-focused Nintendo Direct that aired yesterday, Masahiro Sakurai shared all of this with a few fun personal anecdotes to share with audiences along the way.

After thanking everyone for the multiple awards the game won at the Japan Game Awards this year, Sakurai gave everyone a history lesson for those too young or unaware of who SNK was and hadn’t heard of the Neo Geo console from which Fatal Fury was born. Its use in both arcades and in the home ensured that games released for the system were authentic to their arcade brethren, often because they were, in fact, the exact same game. He spoke of the high cost of the system and its games and how this helped create a boom in the rental gaming market and lots of other interesting facts about the Neo Geo system in Japan and around the world. To be honest, even if you were uninterested in the Super Smash Bros franchise, this video is worth watching for the engaging summary of a console that Masahiro Sakurai is clearly very passionate about, while joking about how the portable variation of the device ‘beat Nintendo’ with the idea for the Nintendo Switch. 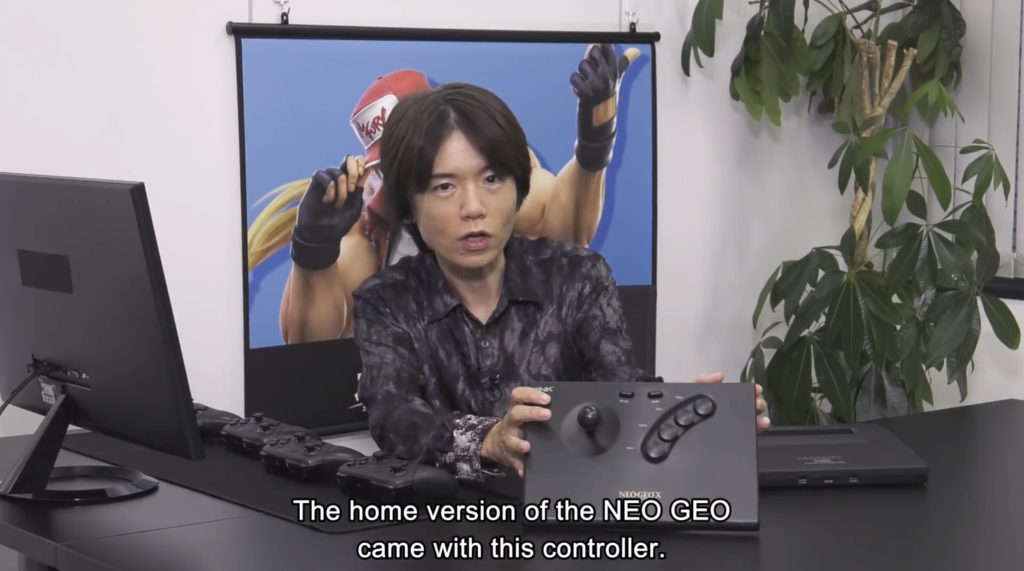 This discussion naturally leads into the question many have asked since Terry Bogard’s reveal for Super Smash Bros Ultimate: why them? There are under-utilized Nintendo and non-Nintendo characters many would likely gravitate to before Terry, after all, so why them? Simply put: Sakurai loves Fatal Fury. I mean, if you’re a games developer creating a fighting game with a choice to have any character you wanted in your game, why not pick your favorites first? He even recommends viewers his favorite titles in the series worth checking out (many of the games featuring Terry Bogard found within the Arcade Archives collection are now on sale on the Nintendo eShop too!).

How Does Terry Bogard Perform Within Super Smash Bros Ultimate?

Even throughout moments explaining how the character acts within the game itself, discussion of his lineage inevitably comes up. Terry Bogard’s outfit within Super Smash Bros Ultimate is based on his original design. One neat customization for the character within the game is that to replicate the 2D fighters the character originated from, the character will always face the opponent when fighting 1v1 with them. Many of the standard moves, such as punches and kicks, are taken and based upon the character’s original move set, as well, with a dash move for the character, called Power Charge, based on a move you could perform in ‘Real Bout Fatal Fury Special’. This was actually a special move in that game, but considering the type of game this is, it’s understandable that this has occurred. In fact, of his entire standard move set, only the somersault kick, the characters up air move, is an original move, with every other action based on games he has appeared in in the past.

Throws and grabs are also based on games he was previously a part of, games which Sakurai can’t help but comment on enjoying in the past. Some special moves, such as the Power Wave which now can be used in the air to limited effect, have been adapted to fit within the game, while even support for using the command move set found in the original game has been added in a similar to Ryu from Street Fighter 2.

The Final Smash is Triple Geyser, a move which fires 3 geysers straight in front of you. If one of them connects with an opponent, a special cutscene will play during which Terry will pummel at their opponent repeatedly before launching them away. Effective, powerful, potentially deadly. And it looks nice too.

On top of this, the Super Special moves from the original game also appear, although this time, instead of activating when his HP is under 30% it instead activates once the percentage meter rises above 100%. Activating this requires the complicated button pattern the original games required to activate it, however, meaning you’ll need some practice in order to perfect it. Doing so, however, could prove lethal. Multiple super specials make an appearance, each featuring their original commands, these being Power Geyser and Buster Wolf.

The ‘King of Fighters Stadium’

King of Fighters Stadium is the venue of choice for Terry Bogard within Super Smash Bros Ultimate. This is a unique stage for a few reasons, making it unique within even a game as large as this. The edges of the stage are walled off, for a start, which is a major stage considering you need to launch players off of the stage to score points. Here, the walls will visibly react to a fighter launching off the walls, and if they hit the walls after they have taken enough damage, they will simply break through them. However, damaging them close to a wall could allow them to break through at lower levels of damage. 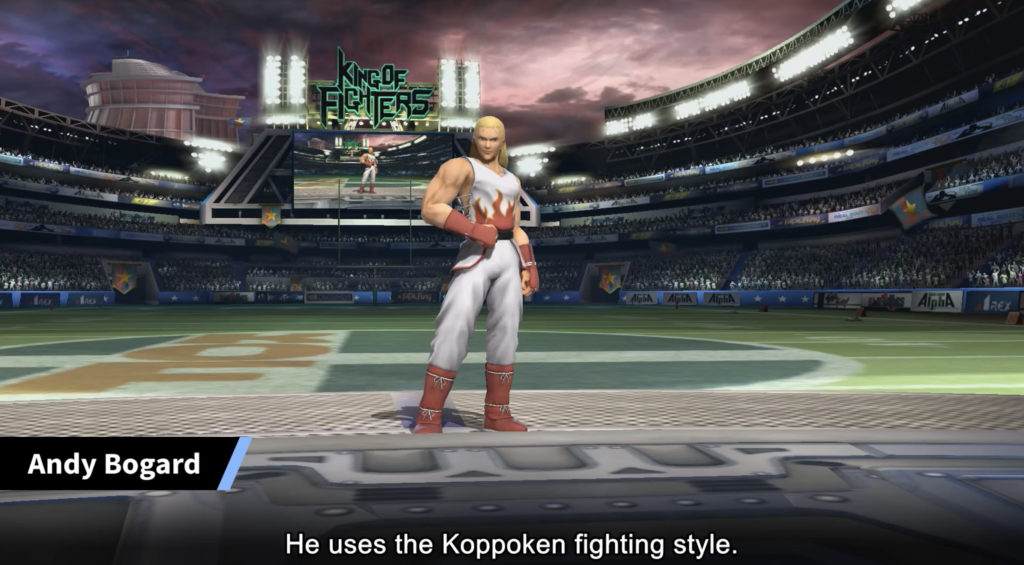 In the background, series favourites will make guest appearances as they watch on. Andy Bogard, Terry’s adoptive brother, Joe Higashi, Tang Fu Rue, Blue Mary and more feature in the background, fan service for the dedicated fans. Other SNK series also appear, including Psycho Soldier, with an incredible vocal theme taken from the original remixed for the music of this game. All guest character appearances are impacted by the music being played at the time.

In fact, the only character well known and missing here would be Mai Shiranui. To put it nicely, Mai Shiranui’s outfit is… revealing, possibly too revealing to appear in the game without the age rating for the game being increased. This is an issue that Sakurai has faced in the past, as he has explained in previous interviews, so while it is a shame that another iconic character from Fatal Fury could not make an appearance within the game, there is valid reasoning for doing so. Nintendo have to keep the age rating for the title as low as possible so that players of all ages have the ability to experience the product, and while there is an argument to be made for their inclusion, age ratings boards and their views on sexual content are the reason for her omission.

‘Smash Bros is for good boys and girls of all ages’, after all, as Sakurai puts it.

Terry Bogard’s DLC for Super Smash Bros Ultimate faithfully lives up to the legacy of one of the most important characters within the fighting game genre. Other modes the character appears in also take much inspiration from the series itself, and the amount of guest characters alongside Terry show that a lot of care has been taken in making sure all fans are pleased by this DLC.

Perhaps most impressive of all is the music selection. While new music has always been added with new DLC fighters and music has always been a massive part of the series’ appeal, this new DLC will go above and beyond previous entries by including 50 different pieces of music, some remixed, for the inclusion of Terry Bogard in Super Smash Bros Ultimate.