Everything Falls Into Place in Tetris Effect 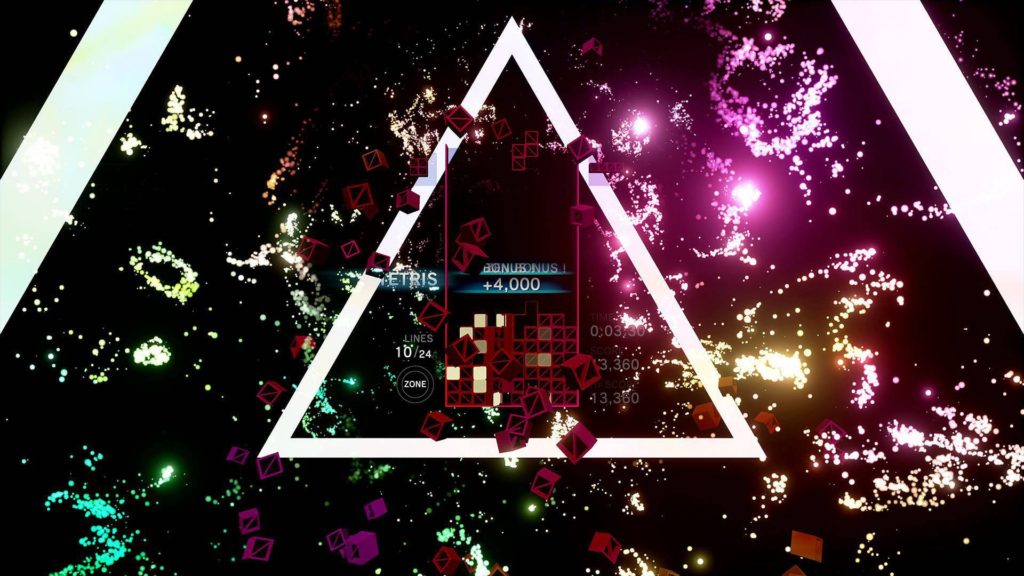 At the intersection of music and video games, there are two names that immediately come to my mind. The first is Naoki Maeda, credited with birthing arcade games like Beatmania and Dance Dance Revolution, Maeda and his team successfully married the gameplay elements to the music, making addicting arcade games that you still see regularly played in Japan and America a full twenty years after their inception. The second, is Tetsuya Mizuguchi, the creator of games like Rez, its successor, Child of Eden, Lumines, and Meteos, who wove the visual elements together with the music in an attempt to convey the sense of Synesthesia, a phenomenon that people describe as being able to ‘see’ music.

His first attempt at that, Rez, was a cult title from the Dreamcast era, and ever since its release I have followed each and every title that Mizuguchi has worked on, from Every Extra Extend to Ninety-Nine Nights, and I thought that the Lumines games released on the PSP would be the end all be all of Tetris rivals. But what happens when Mizuguchi gets to put his hands directly on Tetris? Well, you get Tetris Effect.

I don’t think I really need to explain Tetris, but let’s just get this out of the way. It’s the same gameplay it has always been, blocks are falling, create lines of blocks to eliminate them from the field, and if they reach the top, it’s game over. Okay, that’s done. But what is it that makes this version so special? The original is still a classic and is regularly played at a competitive level amongst seasoned pros, along with all variations of Tetris: The Grand Master. Tetris is a game that has endured. But it is with the touch of Mizuguchi, bringing the element of Synesthesia blending the visual and audio elements to create an experience that is very much different from anything that came before it, but still maintains that intense satisfaction that one can experience by playing Tetris.

If there’s a ‘preferred’ way to experience Tetris Effect, I would have to recommend it be played with a PSVR headset, if only for the immersion factor alone. Tetris Effect is a beautiful game from both a visual and audio perspective, and as a fan of Rez VR, I knew what I was getting in to; but at the same time, I still wasn’t prepared for what I was about the see and hear. Even from the initial trailer for Tetris Effect, I knew this was going to be something special, and across the game’s ‘Journey’ and ‘Effect’ modes, the experience is nothing short of phenomenal. Even without the immersion of VR, the teams at Monstars and Resonair have outdone themselves. But let’s get into the how and why.

The ‘Journey’ mode is the base game for Tetris Effect — spread across 27 different stages, broken up into three to five song blocks, each grouping boasts a wide variety of visuals and sounds. The first course starts with what could be considered the game’s theme song, ‘Connected,’ an uplifting pop song with undersea visuals set to the backdrop of the earth, and after clearing the requisite number of lines, the song in the block comes up, ‘Pharaoh’s Code,’ with its own set of unique visuals and sounds, and this continues through to the final stage, ‘Metamorphosis.’ The gameplay for Journey mode is best described as Tetris meets Lumines. One thing Lumines loved to do was alter the speed of the blocks to keep gamers on their toes, and they’ve brought that over to Tetris Effect with what I consider to be a pretty good success. It keeps things interesting and doesn’t just smother the player in faster and faster speeds like a normal round of Tetris would. If I’m looking for that classic flavor of Tetris gameplay, then it’s over to the ‘Effect’ modes.

In Effect mode, players can find a number of different game modes, like Infection, that requires players to clear the ‘infected’ blocks in order to keep things from spreading out of control, or the classic Marathon mode, where 150 lines need to be cleared as quickly as possible. Effect mode also features weekly community events that allow players to contribute to a weekly goal by playing the requisite modes, participating in these events will unlock new avatars that can be used to represent your player on the global leaderboards. In addition to this there is a personal leveling system, and clearing different stages will award experience points toward your level, and while there is the chance for duplicate avatars to get picked up, those duplicates result in bonus experience, which is a nice addition, since it’s very likely that some of these avatars are going to be ‘rare.’

So, to say Mizuguchi has some experience with combining visual and music elements to great effect is something of an understatement, and this is especially true with Tetris Effect. Every stage in this game has visuals to match the audio component, and they intersect in interesting ways. Playing the stage, ‘Da Vinci,’ players are sent flying through the air with the tetrominoes displayed as gears that turn with each line clear, and the sounds of tetrominoes falling compliments the music track. Each level does this to varying levels of success, and to say there is a ‘bad’ track in the bunch is nearly impossible. The different styles may not be everyone’s cup of tea, but there is certain to be one track out there at the very least every person can latch on to. The discordant piano of Downtown Jazz, or the EDM festival sound of Celebration, the work put down by composer Noboru Mutoh, and the Hydelic group is a master class in video game soundtracks that to me, only compares with Keiichi Okabe’s NieR: Automata soundtrack in terms of ‘near-perfection.’

The VR functionality of Tetris Effect is what really separates this game from its peers and elevates it to ‘Game of the Year’ contention. When you combine the immersion of playing Tetris with the visual and auditory elements, it left me in a state of something short of ecstasy. And to try to describe that feeling is complicated. I feel like this effect is going to vary from person to person, but for me, it’s about a sense of control. To play Tetris Effect is to take control of a very chaotic situation, and when I’m clicking, and the game is going my way, the game responds in kind with explosions of color and sound. It’s incredibly easy for me to find a rhythm while playing this game, I’m tapping my foot, I’m bobbing my head, the tetrominoes are falling in time with the music. It all melts together into this sensation that is both calming and euphoric, which is something I haven’t experienced since, maybe the first Lumines game.

The medical term ‘Tetris Effect’ is described as the result of intense focus and repetition, as studied with the use of the game Tetris, people who played the game could remember seeing the tetrominoes, even after playing the game, out of the corner of their eyes, or as part of their dreams. Playing Tetris Effect is like experiencing one of those dreams, as Mizuguchi and his teams at Monstars and Resonair have woven music and impressive visuals wrapped in the Unreal Engine into one of the most visually arresting games released in this current generation of hardware. It’s not enough that I tell you that you need to play Tetris Effect, you need to experience it — there really is nothing else like it.