Slime Puts A Unique Twist On The Isekai Formula 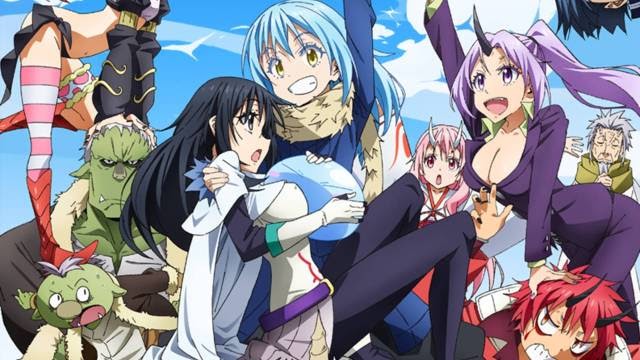 At first glance, That Time I Got Reincarnated as a Slime may look like just another isekai anime.  But, just like its main character, there is more to Slime than meets the eye.

For one thing, most isekai heroes get to remain human.  (There are a few exceptions. The skeletal main character of the anime Overlord comes to mind.)

The basic isekai formula looks a little something like this: An ordinary, modern-day human gets transported to a fantasy realm — either by dying or by some other science-fiction/ fantasy contrivance.

After some initial confusion, he or she uses real-world knowledge to survive and thrive. If the world resembles a Square Enix RPG, the main character will likely use video game skills to become a hero, slay monsters, etc.

(The Japanese word “isekai” can be translated as “another world” or “different world.”)

And indeed, That Time I Got Reincarnated as a Slime does follow many typical isekai conventions. But, as the unusual title implies, there is a lot more to the story than just that.

What makes That Time I Got Reincarnated as a Slime anime worthwhile?

That Time I Got Reincarnated as a Slime is a fantasy-adventure isekai anime about a little blue blob of slime named Rimuru Tempest.

In case you were wondering, his pre-reincarnation human name was Satoru Mikami. His reincarnation as a slime happens as the result of some odd requests he makes when his human body dies in the first episode.

It’s a fun series, with a good mixture of fighting, negotiation and quiet reflective moments. It’s got a good sense of humor, doesn’t take itself too seriously and it’s not afraid to play with typical fantasy world conventions. It is an isekai, but the “alternate universe resembles an RPG” theme is a starting point, not the destination.

Great anime heroes often start at the bottom and work their way up, and Rimuru is no exception. You can’t get much lower than a slime stuck in a cave. But Rimuru quickly learns that there are advantages to this lowly form — he can literally absorb information and learn new skills from what he eats.

Over time, Rimuru will become a world leader, negotiate treaties with some nations and fight with others, and even gain students of his own to train.

Slime flips the stereotypical, traditional fantasy world hero/ villain cliche. Many of the show’s heroes are from fantasy races which would often be the bad guys or monsters in a typical RPG.

For example, our protagonist is a slime (a low-level monster in some RPGs). He befriends a powerful dragon (often evil in stories). This slime goes on to become the leader of a tribe of green-skinned goblins (also often evil). Rimuru’s goblin village grows into a nation which includes dwarves, ogres and lizardmen.

The goblins become hobgoblins after the whole tribe gets an upgrade; this is all thanks to Rimuru naming them. Named creatures get more powerful in the Slime universe.

Only the orcs seem to fill the same bad guy niche that they do in Lord of the Rings or other fantasy stories. And the orcs of Slime are different from J.R.R. Tolkien’s orcs — they look more like giant, monster warthogs. Eventually, the orcs earn their redemption.

Humans in the world of That Time I Got Reincarnated as a Slime are often the bad guys, not the heroes. Green is not mean in the Slime universe.

Rimuru isn’t human, but he does gain a cute humanoid alternate form during his adventures.  This blue-haired, girlish human form follows a longstanding anime tradition of cute, chibi characters. It also allows him to communicate better (sometimes) with the humans in his world.

Rimuru’s normal blue blob body is cute as well, as he can show emotion through slime sweat drops and other typical anime facial expressions. He can also be squashed and stretched like a balloon by overenthusiastic followers.

Of course, other characters can be cute and funny as well. Consider Gobta. Gobta is sort of a hobgoblin version of (pre-time skip) Naruto. He has a goofy personality, and people don’t always take him seriously.

Of course, like any Naruto-esque shonen hero, he does get stronger to the point where he can defeat Gabiru, a leader of the lizardmen, in combat.

Gabiru himself is an interesting character, with his lizardmen fanboys acting as his personal cheerleaders.

That Time I Got Published as a Manga

Like many anime series, That Time I Got Reincarnated as a Slime has gone through several incarnations.

According to Wikipedia, it started out as a serialized online novel in 2013, making it slightly newer than popular isekai series, The Rising of the Shield Hero and KonoSuba. (Both of those started out in 2012.)

Since then, there has been a printed light novel series, several manga, and an anime. The first season of the anime started in 2018 and ended in 2019.

That Time I Got Reincarnated as a Slime anime series is available on Crunchyroll and Funimation. Crunchyroll has  24.5 episodes, plus three OAD (Original Animation DVD) episodes. The light novels can be purchased from Yen Press. The first chapter of the manga is available for free at Kodansha Comics; the rest has to be purchased.

There is also spin-off manga. The Slime Diaries is made up of short, four-panel comic stories. The first chapter is available for free at Kodansha.  According to Anime News Network, Yen Press has licensed The Ways of the Monster Nation and will publish it in June 2020.

Will there be a second season?

In March of 2019, it was reported that That Time I Got Reincarnated as a Slime would get a second season. The news was announced on the anime series’ official Twitter account and also confirmed at a special event for the series.

In February of this year, Crunchyroll confirmed that the series would be part of their Fall 2020 anime lineup.

An official trailer has also been produced. The 15-second trailer doesn’t reveal much, but it shows a lineup of the show’s main characters, all standing except for Rimuru. They all look vaguely menacing while wearing military-style long coats.

Rimuru (in human form) sits in the middle of this group. He slouches a bit in a boastful pose which seems to suggest, “bring it on.”

Taiki Kawakami, Fuse, KODANSHA/ “Ten-Sura” Project
That Time I Got Reincarnated As A Slime
Join Our Discussions on Discord
Join Now