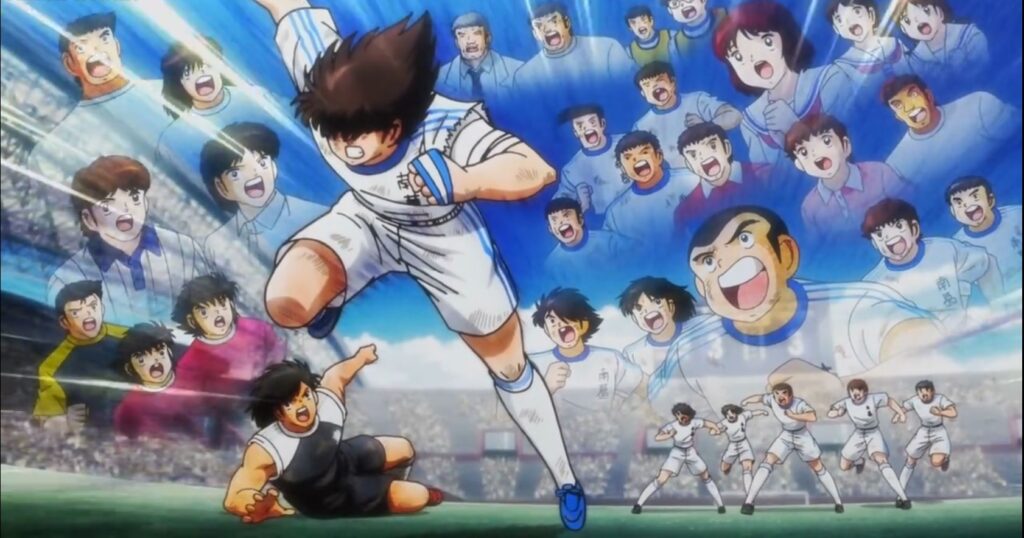 Soccer, aka football, is one of the more popular western sports in Japan. And this popularity is reflected in the many football/ soccer-related sports anime series.

Note: This article deals with the sport of ‘association’ football, soccer, or if you prefer, fútbol; and not ‘American’ football, or gridiron football. In case you needed a reminder.

Whatever you call it, you have a lot of choices when it comes to good soccer/ football anime series:

Captain Tsubasa did for soccer anime what Slam Dunk did for basketball, or The Prince of Tennis for, well, tennis. It’s a quintessential classic.

The Yoichi Takahashi manga series started in 1981. It was adapted as a TV anime series in 1983-1986. Since then, the original series has been followed by multiple anime movies, OVAs, and sequel remake anime series.

The various timelines are tricky, because the sequels sometimes retell stories from Tsubasa’s childhood. But the story remains essentially the same. Soccer-loving Tsubasa leads teams to qualifiers and tournament victories. He eventually leaves Japan for international competition. He even achieves his dream of playing in the World Cup.

For such a successful franchise, the anime is surprisingly hard to find online outside of Japan. But there are Blu-ray discs and DVDs available. 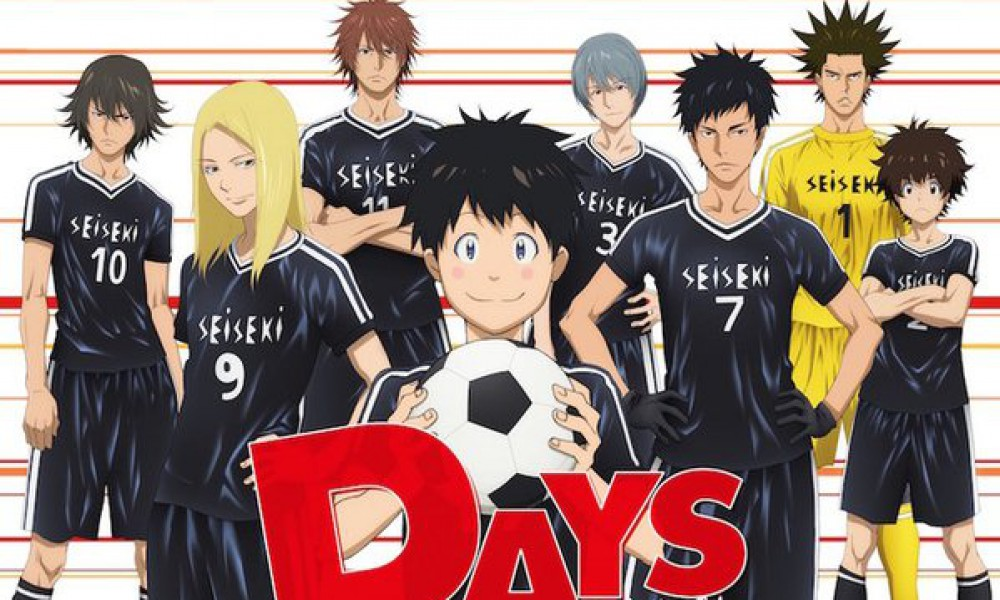 This 2016 anime series is based on a Tsuyoshi Yasuda manga which ran from 2013 to January 2021. It features a shy teen who joins his high school soccer team. At first, Tsukushi starts out as a novice player. But he tries hard, and with determination, he grows into a stronger player over time.

DAYS is as much about the slice-of-life school stuff off the field as it is about the typical sports anime soccer action. Some have said that it has more in common with the shy protagonist of Yowamushi Pedal than it does with a more serious soccer series such as Captain Tsubasa. Whether this is a good thing or a bad thing depends upon your taste in sports anime. Crunchyroll has the series. 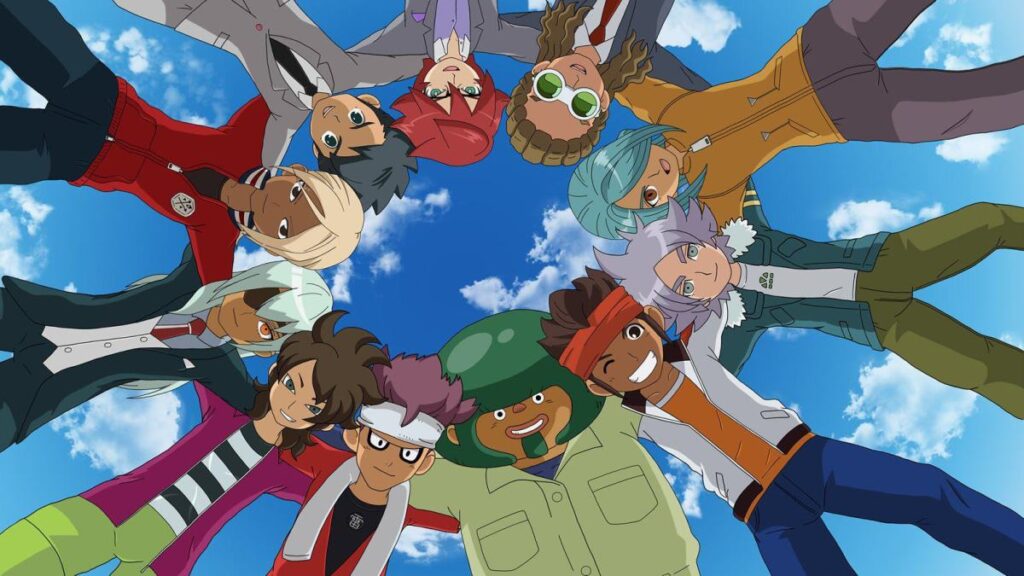 The 2008-2011 Inazuma Eleven anime series is based on a video game franchise. The anime focuses on the Raimon Junior High soccer team. Like many anime sports teams, Raimon doesn’t have enough players to keep going at first. But, with the unstoppable enthusiasm of goalkeeper Mamoru Endou, the team manages to return from the brink. Within both the game and the anime, soccer players also have video game-style special techniques to use in matches.

The second season adds Aliea Gakuen, a military academy of ‘alien’ players. In the third season, the game goes international, including angelic and demonic teams.

Given the science-fiction and fantasy elements of the original, it’s no surprise that the sequel series Inazuma Eleven GO would take the story in a dystopian direction. Raimon must now fight against the evil organization which controls soccer. It’s sort of a dark and shadowy version of FIFA.

Arait Play, a Spanish anime distribution company, has the English dub version on its YouTube channel. However, not all episodes may be available in your region. The series is also on Disney Now; and at Amazon. 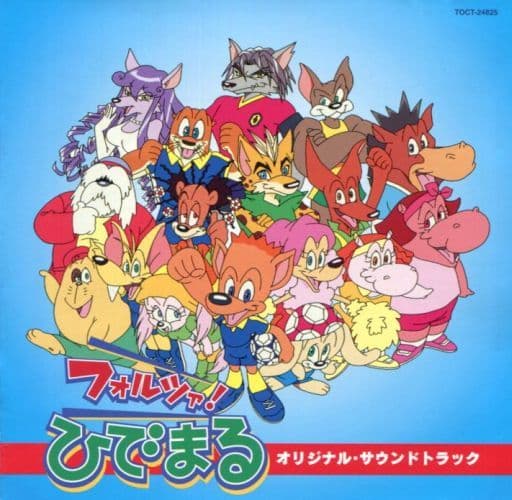 If you’re a fan of the cult classic animated TV film Animalympics, or if you like BEASTARS, BNA: Brand New Animal, or Aggretsuko, you might enjoy Forza! Hidemaru.

This 2002 anime series belongs to a small, but unique genre of funny animal/ furry anime. The show is toony and a bit silly to be certain. But there’s no doubt that the series loves soccer as much as its main character does.

International audiences might know the series as Forza! Mario. Hidemaru/ Mario dreams of becoming a star player on a top soccer team. However, when the series starts, his team is on the verge of being disbanded. With help and advice from old coach Sen-no-Joe, Hidemaru and his team of friends battle many opponents, including Kaizer, the German wolf star of Club No. 1.

This 2002 manga/ anime series was created by Yoichi Takahashi, but it’s not a direct sequel to Captain Tsubasa.

In the series, Kyosuke Kano is a high school transfer student who lives in the shadow of his older brother, an AC Milan player. After meeting Miki, a girl who loves the sport, Kyosuke decides to join his school’s soccer team.

The series is available legally at AnimeLog on YouTube. 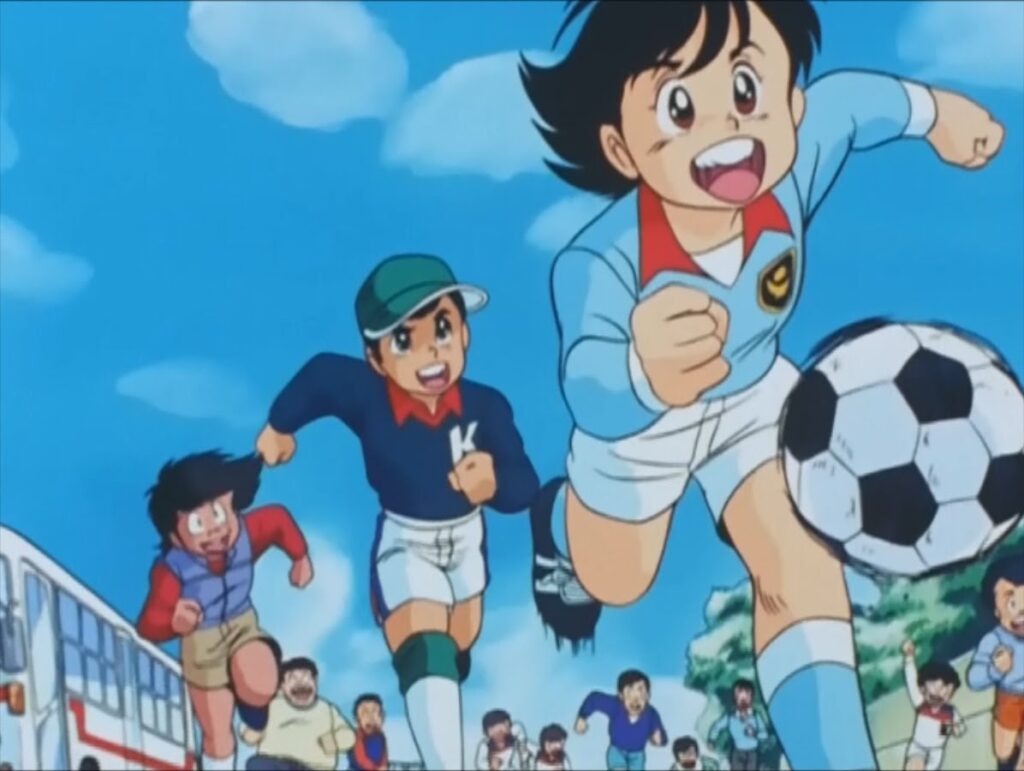 This 1986-1987 anime series, based on a 1985-1989 manga series, is the second-oldest show on this list. And it really shows its Showa Era anime roots. (By comparison, Captain Tsubasa kept going and updating.)

Like the first Tsubasa series, it tells the story of an elementary school soccer fanatic. Kakeru Daichi joins a struggling, underdog team. The team turns itself around and starts winning matches. There’s also some romantic comedy with Kakeru’s sister, Ayumi.

The series seems to be more popular in Europe than in the United States (it’s soccer, duh). You can find the series dubbed in German at Anime On Demand (legally, according to the site) on YouTube. 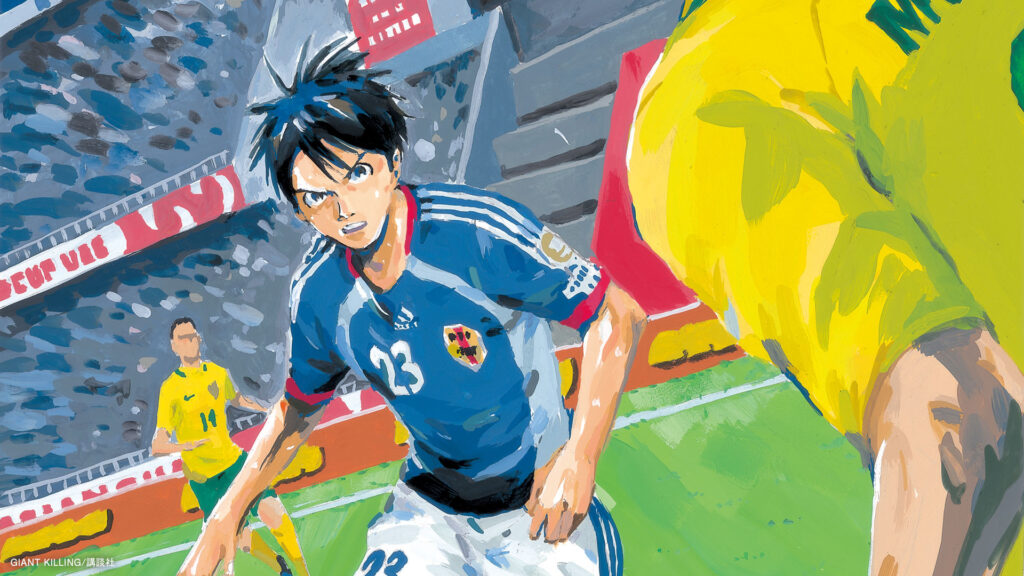 This 2010 anime series tells about East Tokyo United, a struggling pro soccer team. Having lost a bunch of games, they look destined to drop a tier.

Desperate to shake things up, they hire a former star player as a coach. Tatsumi Takeshi turns out to be an unconventional coach. His methods are eccentric, but they seem to help the team.

NHK has a lot of information about the series.