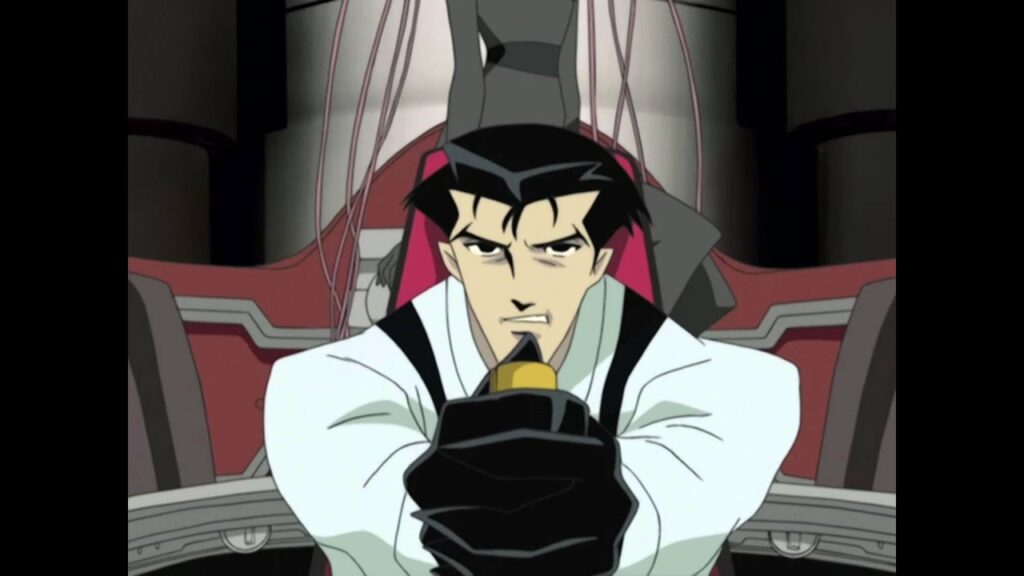 After the latter half of the 1990s gave us some of the best anime ever, like Neon Genesis Evangelion, Cowboy Bebop, and Serial Experiments Lain, no one could have expected that in the very last season of the previous millennium would give us some as good as The Big O.

Animated at Sunrise, the studio behind Cowboy Bebop, and scripted by Serial Experiments Lain writer Chiaki J. Konaka, the show being good wasn’t actually too surprising. We saw a lot of narrative and directorial experimentalism in the late 90s and The Big O wrapped up that period of anime with a nice bow.

As the story goes, the series actually wasn’t a huge hit in Japan at first. It wasn’t until an American broadcast run on the influential Toonami block on Cartoon Network that The Big O found its fanbase. Because of its newfound fandom, a second season eventually followed.

Older than some of you were alive now, you might be wondering what exactly is this mysterious, moody, noir robot anime. What Made The Big O a One of a Kind Anime

When people say The Big O is essentially anime Batman, and specifically the incredible Batman The Animated Series, they aren’t too far off. A lot of staffers who created The Big O actually had worked on some of the animation production for Batman The Animated Series. With that show being the legacy American cartoon that it is, you can’t blame these animators who played a relatively small role in creating that show to do more in that vein.

We’re glad they did because The Big O still holds up to this day with its blend of film noir, super robots, and Batman. Don’t believe us? Just give the first episode a chance and we guarantee you’ll be, but in case you’re not already sold, here’s a synopsis.

The Big O centers around an ultra-rich playboy type named Roger Smith and his giant mech, in this show referred to as Megadeuses, called The Big O. He lives in a domed-off city called Paradigm where no one can remember anything before a certain point, much less where all these giant robots came from.

Still, life goes on as Roger Smith routinely protects the city from over-sized harm. Along that way, he comes into custody of a deadpan Robot girl named Dorothy, who tends to give him a lot of flack. Together, in a mostly episodic format a la Cowboy Bebop, they begin to unravel the mysteries surrounding Paradigm city amidst a series of touching one-off stories along the way.

The Mysteries of Paradigm City

Imagine a city where nobody has memories from 40 years ago. Some people were born after that date and so their memories are unaffected, but everyone older than 40 has unexplainable gaps in their memory. There’s a giant dome around most of your city and while you’re free to do what you want inside the city walls, you can’t really escape far out to find out if you truly live in a post-apocalyptic scenario or maybe if you’re unwillingly taking part in a giant science experiment.

The Big O drops you and all of the citizens of Paradigm City straight into the situation. Beyond the story ramifications of this setup, these missing memories haunt the series and play up the show’s already ethereal and hypnagogic atmosphere. As the show goes on, Roger and the viewers discover tidbits about Paradigm and the Rosewater family history who have controlled the paradigm group since god knows when.

Of course, amidst the secret histories and the Noir Giant Robot battles have to be fought, so the series dips back and forth between indulging in these mysteries. However, what’s maybe more interesting than what’s going on behind the scenes in Paradigm City is how the fact that something’s up affects the world of the show. 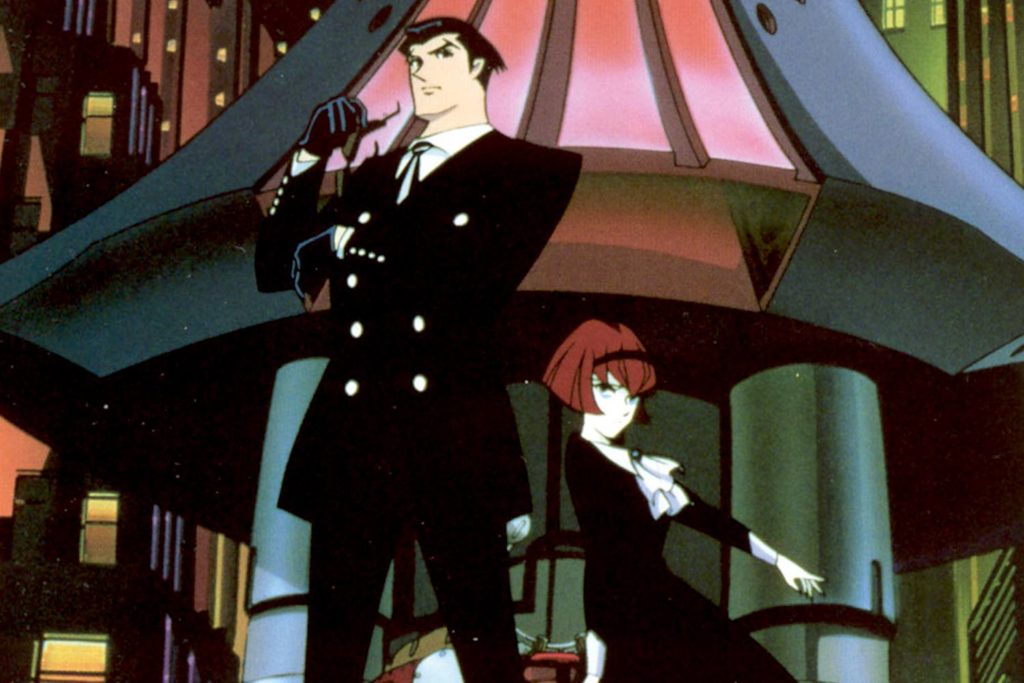 We already said Roger Smith was a billionaire playboy who spends the majority of his free time protecting the rather gothic city he lives in, right? Roger Smith is a clear parallel to Bruce Wayne, you know the guy under the Batman mask. They didn’t even bother to give him much of a redesign, aside from a slick animeification.

He even has his own dedicated butler, Norman, who’s the Alfred to Roger’s Bruce.

Instead of dressing up as a bat and punching Joaquin Phoenix and Danny DeVito in the face, he pilots the Megadeus Big O: A giant gothic and mythical looking robot that owes its design lineage to the likes of Giant Robo and Tetsujin 28 more than it does its Sunrise Gundam family. Plus, it uses machine guns which are always cool.

People know he’s the one piloting The Big O though, so there’s no secret identity or ‘Am I The Man Or The Bat’ thing going on this time around. He does have a day job though; His day job is a negotiator, dealing with criminals and making business deals for the Paradigm corporation which controls Paradigm city.

Roger Smith makes for a memorable and unique protagonist for a couple of reasons. To start with, he’s an adult. Uncommon in the anime landscape, and yet already being of an age where one is set in their ways, he goes through genuine growth throughout the series. He starts the series off as a bit of a jerk. He’s always willing to do the right thing, saving lives and all that, at the end of the day.

However, as the series goes on and he spends more time with Dorothy and pursuing the lost memories of the city, he begins to soften and mature.

Dorothy Wayneright Is One Loveable Robot

‘You’re a louse, Roger Smith’. These are the most frequent and famous words to come out of Dorothy Wayneright’s mouth. Yes, Wayneright’s her last name. Wonder how the production team came up with that one.

She’s an android who Roger Smith rescues at the beginning of the show and subsequently starts living with when her creator passes away. Despite being an android, it’s clear she develops all sorts of feelings and curiosities as the series goes on, something Roger’s reluctant to accept at first.

When she’s not busy helping Roger out on his missions or getting kidnapped, she’s taken to learning the piano. While she can play with technical accuracy, Dorothy strives to sound more ‘human’, namely in an effort to impress Roger.

While Dorothy gets herself into trouble more than once, her belief in Roger Smith despite her willingness to call out his distasteful qualities is enough to make anyone fall in love with this one of a kind android lady.

Alex Rosewater Is More Your Lex Luthor Than Your Joker

While Roger Smith was clearly inspired by the Bruce Wayne of Batman The Animated Series, and the show also cribbed from BTAS’s noir atmosphere, it’s not like the show as a one to one reimagining of Batman with Robots instead of Super-Heroes. A big departure point between the two would be the series antagonist Alex Rosewater who, if we had to make a DC comics comparison, comes across much more as a Lex Luthor type than a Joker or Riddler.

Son of the city’s founder Gordon Rosewater and the current chairman of the Paradigm Group, which controls the city of the same name, Alex Rosewater quietly rules over with extreme force. He has extreme prejudice against the lower classes and often organizes these enemy robot attacks as a way of keeping the commoners in line.

He enjoys power, and despite being in charge of literally everything, the fact that Roger keeps foiling his schemes irritates him to no end. Doubly so when Roger gets further entangled within the mysteries of the Paradigm Group.