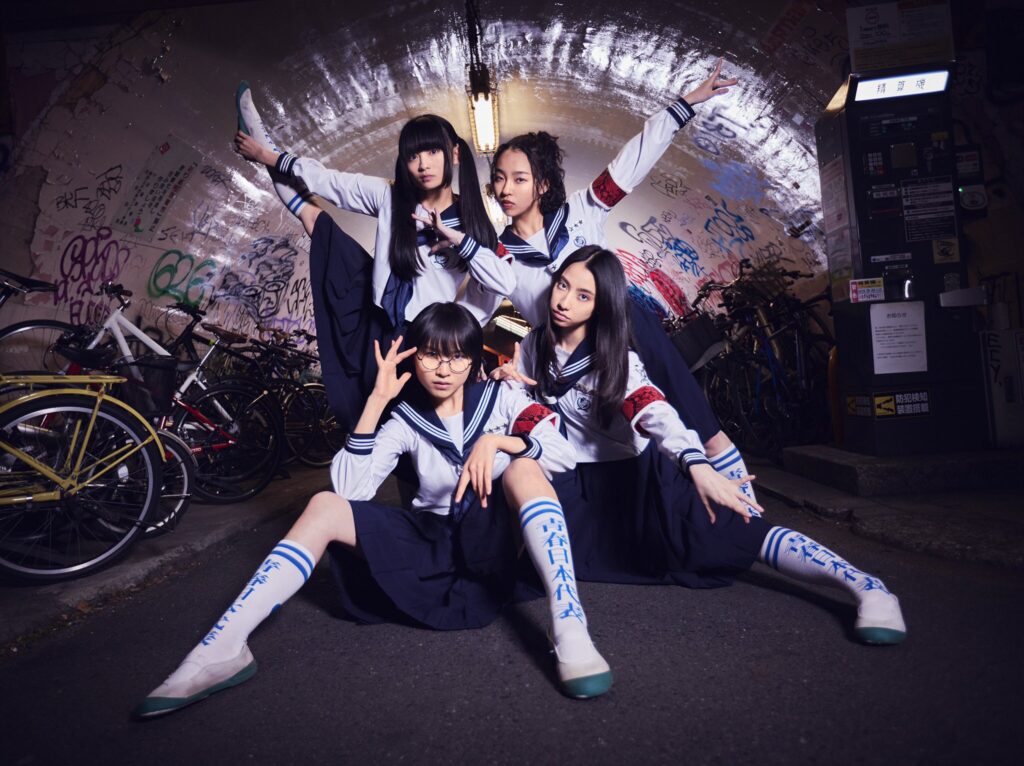 ATARASHII GAKKO! made their presence known in the West through a series of lighthearted PSAs focused on everyday life in Japan called Seishun Academy. Some topics they explored include touring a Japanese high school, riding the bullet train, and learning about local holidays and traditions in their own way. These charming videos, however, give us only a glimpse into the exceptionally controlled chaos of their performances.

Even as the world locked down during a pandemic, these girls somehow found a way to entertain us online and make an impact. Their down-to-Earth, relatable style is a nice contrast to the flashy, glorified image of a standard idol group. Watching their performances is liberating… they truly love doing what they do.

Now that they’re breaking the internet, I think it’s a great time to look at who this group really is and break down some of their most recent songs. ATARASHII GAKKO! is much more than a novelty act and there’s something really authentic in the way they present themselves. Let’s see what makes this group so special.

Who Are ATARASHII GAKKO!?

ATARASHII GAKKO! consists of four group members: MIZYU, RIN, SUZUKA, and KANON. The group was first formed in 2015 under Victor Entertainment and made their debut in 2017 with the single ‘Dokubana’. In 2020, they signed with 88Rising to start releasing their music internationally.

Hailing from Osaka, SUZUKA is the de facto leader and center of the group, often taking charge of the group’s vocal and choreography routines. MIZYU, RIN, and KANON provide excellent vocal support in many of the group’s chorus numbers. On social media and YouTube, they’ve also released recordings of live performances, dance choreography, a rotating Q&A, and collaborations with figures such as the controversial mascot Chiitan.

The most prominent collaboration with 88Rising is ‘NAINAINAI’. It’s a bleak song that subtly channels the hardcore energy of teenage angst. It deals with the uncertainty of the future and the struggle to search for an idealized self. Moreover, the track emphasizes a feeling of listlessness and pointlessness; of not feeling you belong anywhere and constantly measuring your self worth to others, only to be disappointed in the end. The only self satisfaction comes from some shallow attention on social media like TikTok.

Interestingly, the Japanese word nai features prominently in the song’s chorus, which means something that is not. Other words used to connote negative things include yabai and I think these phrases effectively illustrate the negative feelings of the narrator.

I like that ‘NAINAINAI’ is a bopping blend of Japanese rap and J-pop and for taking such a depressing topic and making it palatable. SUZUKA delivers curt rap lyrics that melodically compliments the unique swing rap beat. The catchy refrain and melody are infectious earworms that repeat the phrase ‘peek-a-peek-a-boo’ before seamlessly transitioning to the heart of the lyrics. It’s an easy song to get into and an overall great introduction to ATARASHII GAKKO!

‘Otonablue’ is a song that muses on the melancholy of adults and their dating life. It can be roughly translated as ‘Adult Blue,’ which is a fitting description to a relatively low key song. It describes a person’s immediate desire to experience an adult form of love and how their ‘blue’ emotion makes them feel stuck in adolescence. Despite her adult demeanor, her ability to charm men is only a facade because she still feels a shred of inexperience in her maiden heart. The narrator searches for the one who can love her the most and has high standards that go beyond appearances and pleasantries.

This song honestly surprised me with its bold maturity, contrasting the differences between how youth and adults deal with romance. The backing instrumentals sound like something that’s used in a low budget advertisement or exercise video from the 80s if I’m being frank. Despite its cheesiness, it somehow works with the group’s lyrics and vocals.

‘Freaks’ is paired with a pretty fun music video featuring ATARASHII GAKKO!, rapper Warren Hue, and a bunch of sumo wrestlers fighting to the death. The musical production is primarily handled by producer Yonkey, whose hip hop EDM fusion style is very much felt throughout the song. Although it’s fairly short, it’s catchiness and manic energy makes an undeniable impact instantly.

‘Freaks’ utilizes a sample from Claude VonStroke’s ‘Freaks don’t fail me now’ which makes up a majority of the song’s refrain. Yonkey also adds his own personal touches such as an elongated synth sequence and piano solos, giving the song a dynamic texture without ever making it a carbon copy of the original sample. The dramatic drop also lends itself to being a great sound bite to use in a TikTok or Instagram video.

Thematically, the song is about embracing your own uniqueness and the moniker of being a freak. I’m also starting to think that ATARASHII GAKKO! likes juxtaposing Japanese and English phrases that sound similar to each other, as exemplified in ‘NAINAINAI’ (e.g ‘have a nice day’ sounds like ‘haba naissu ne’ which roughly translates to ‘don’t have the bandwidth’).

‘Shiken zenya’ adopts a hard consistent beat throughout its duration that explores the anxieties and struggles of studying before an exam. The lyrics are mostly random general phrases timed to the rhythm of the guitar and percussion with the music video demonstrating the group’s frustrating cram session. Additionally, the music video itself uses a single take to capture the group’s amazing performance. It’s impressive to see how engaged and focused they are in sticking to their craft.

Despite the randomness of the lyrics, the thing they have in common is the feeling of added pressure and stress, building up to a complete loss of function. The song also features a pretty good instrumental break that lets us see ATARASHII GAKKO! in their best element. I definitely love the rock sound in shiken zenya and further showcases the group’s versatility into different genres and musical styles.

What’s Next For ATARASHII GAKKO!? 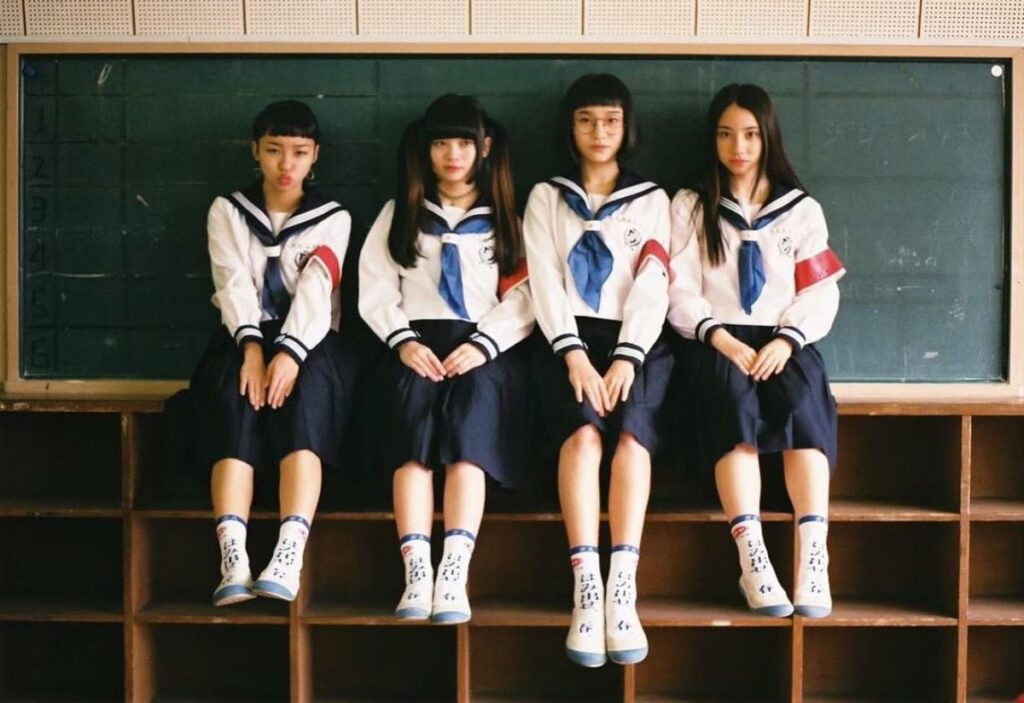 The future for ATARASHII GAKKO! looks bright and I have no doubt they’ll attract many fans in North America. Whether it’s their unique personalities or their awesome musical and dance performances, they’re a distinct force to reckon within the Japanese music scene. I also think their flexibility to explore genres will distinguish them from other group acts and make them appealing to fans who may not be familiar with Japanese music.

You can listen to ATARASHII GAKKO! on platforms such as Spotify and Apple Music.