The Devil May Cry Series Is One Crazy Party 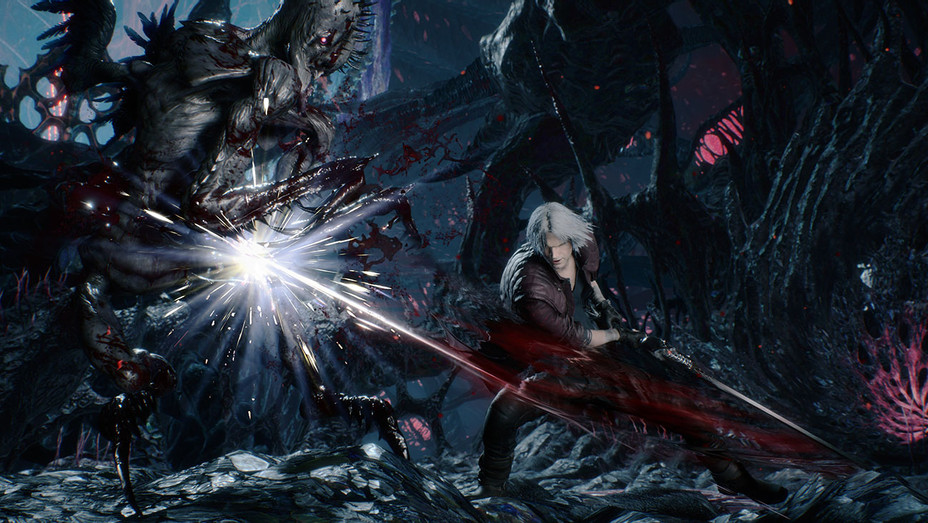 If there’s one thing that your video game needs to be successful, it’s a guy with a big sword. While often these characters are stoic, conflicted heroes, with the Devil May Cry series, creator Hideki Kamiya was looking for a different archetype. Kamiya was looking to create a game that had a world that could only be described as cool, and he molded Devil May Cry’s main character, Dante, to fit that world.

Devil May Cry initially started out as a prototype for Resident Evil 4. Because Resident Evil 3 focused on biotechnology, which Resident Evil 4 would as well, the initial main character, Tony, was supposed to be a man with superhuman abilities ‘beyond human intelligence’.

Unfortunately for Kamiya, Resident Evil 4 producer Shinji Mikami didn’t feel like the ‘cool’ aesthetic would quite fit the survival-horror game he was looking to create. So Kamiya instead revamped the character, essentially switching out the explanation for his superhuman abilities, from ‘biotechnology’ to ‘demons’.

The Devil May Cry series generally focuses on the exploits of Dante, a half-demon monster hunter. He’s known for his general cockiness but exceptional and supernatural skill as a swordsman and gunslinger. According to Kamiya, his personality is largely based on Cobra, the main character from Buichi Terasawa’s manga of the same name.

Kamiya describes Dante as someone you’d want to get a drink with and more mischievous than anything else. While he is showy, he’s not exactly a show-off, but the Devil May Cry series has made stylish action a major component of the series’ gameplay.

Devil May Cry is usually referred to as a hack-n-slash, challenging players to string combos together without getting hit by enemies in order to fill up the ‘Style’ meter. The more hits and stylish actions the player can string together with as much variance as they can, the more bonus points they earn in order to upgrade their attacks and weapons. This emphasis on style would be carried over to Bayonetta once Kamiya joined up with Platinum Games.

Players then earn letter grades for how well they did in a specific combo string, ranging from D- to SSS-rank. The game was built with a ‘juggling’ mechanic, where players can launch enemies airborne and keep them there by attacking them. Dante, being a half-demon, can also enter a frenzy mode known as Devil Trigger, where he transforms into a demonic shape with increased movement, strength, and recovers his health.

The first game introduces Dante as the son of the legendary demon Sparda, who overthrew the demons that had been enslaving humans and banished their leader, Mundus, to the Demon World. As the game opens he’s approached by a mysterious woman named Trish who warns the monster hunter that Mundus is due to return, and takes him to Mallet Island and a mysterious castle where Mundus is slated to return.

Dante then uncovers the mystery of his twin brother, Vergil’s disappearance, learning that he’d been brainwashed into serving Mundus as one of his generals. Then he finds out that Trish is a demon and was going to betray him all along, but after he saves her from Mundus’ wrath they eventually form a partnership, renaming his monster hunter agency ‘Devil May Cry’ to ‘Devils Never Cry’, after how Trish realized that she was no longer a demon. 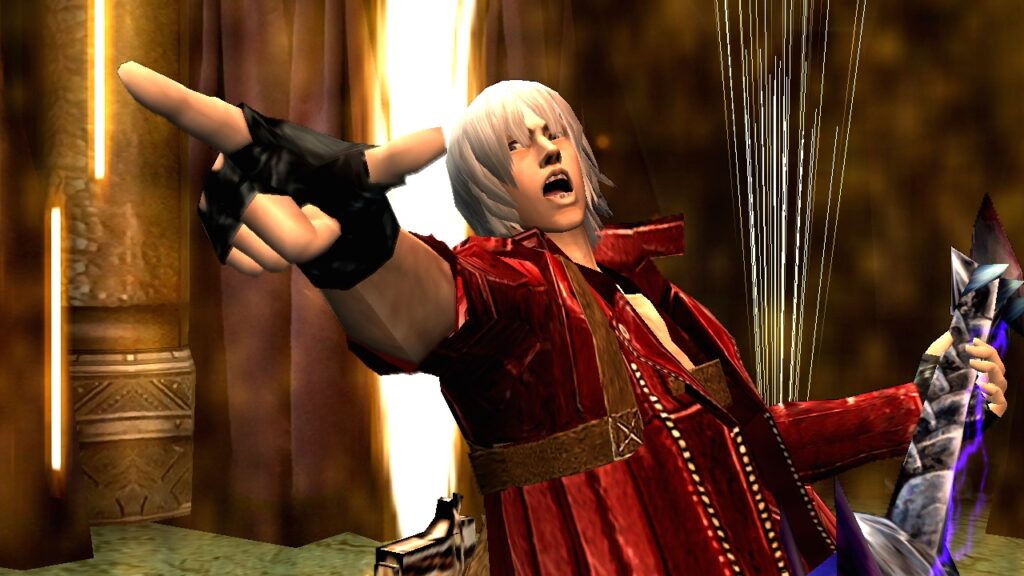 While Devil May Cry did exceptionally well, its sequel received mixed reviews. Devil May Cry 2 introduced the character of Lucia, who runs into Dante while he’s dispatching a group of demons. She explains that a businessman named Arius is trying to summon the demon lord Argosax and use his power to take over the world.

Dante agrees to help, and they travel to Dumary island. Lucia was a playable character in Devil May Cry 2, and players could play through both of their unique stories. However, fans complained that the game was too easy compared to the first Devil May Cry, the difficulty of which was meant to be a challenge. Dante’s character was also generally toned down, and critics noted that every character felt somewhat lifeless.

In Devil May Cry 3: Dante’s Awakening, developers explained Dante’s origin story more, pitting Vergil as Dante’s direct antagonist. In addition to Vergil, Devil May Cry 3 also introduced Lady, the daughter of Vergil’s cohort Arkham. Lady’s real name is Mary, but after learning that her mother died due to Arkham’s demonic experiments she refused to let him call her by that name.

In the course of the game, Vergil and Arkham are looking to reopen the portal to the demon world, which was sealed via a great tower known as Temen-ni-Gru. It is reactivated by Vergil and Arkham, causing it to suddenly burst from the ground in the middle of A City (It’s not clear which).

Dante then fights his way through to the top in order to challenge Vergil, not knowing that the key to reopening the demon world and reclaiming the power of Sparda lies in Dante’s amulet, of which Vergil has the other half. This ties back to the first Devil May Cry, whereupon defeating Vergil/Nelo Angelo Dante gains the other half of the amulet and unlocks the true power of his sword, Rebellion.

The game also sets up Vergil’s capture by Mundus. After Arkham betrayed Vergil and was defeated by the two brothers in the demon world, Vergil stayed behind in order to seal the portal from his side while Dante returned to seal it in the human world.

The first three Devil May Cry games were released primarily on the Playstation 2, but they’ve since been ported to other consoles including an HD Collection for the Nintendo Switch. 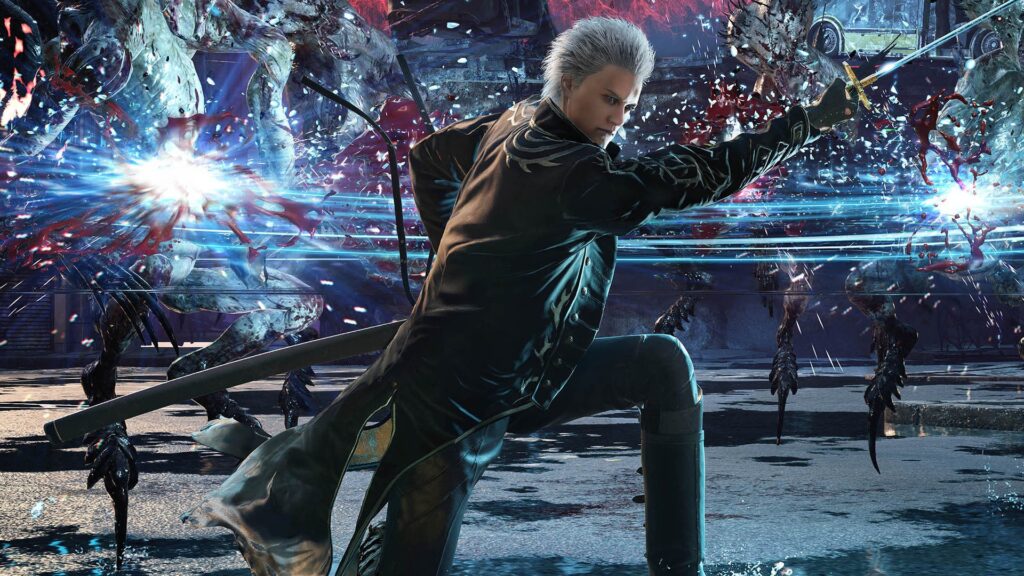 Devil May Cry 4 Introduces us to Nero

Devil May Cry 4 re-centers the plot around Nero, a young monster hunter living on the island of Fortuna, home to a sect of cultists that worship Sparda as a god. This is thrown into chaos when Dante, the son of Sparda, arrives and kills the high priest in front of the entire cult.

This, understandably, sets Nero against Dante until he uncovers that he is also a descendent of Sparda, and that the church has been using the power of a powerful artifact, Vergil’s Yamato blade from Devil May Cry 3, to give themselves demonic powers. The game features Nero and Dante as playable characters over the course of the main plot, as well as Vergil in a mini-prequel segment.

Nero introduces new mechanics; with his demonic Devil Bringer arm players integrate the ability to grab, carry, and throw enemies into combat. Additionally, Nero’s sword, the Red Queen, has an Exceed Gauge, where players can briefly charge the sword up to deliver more powerful attacks, which allows for more varied combos and stylish action. The game also features Trish and Lady as playable characters for a few missions.

Capcom Tries Something Different with DmC: Devil May Cry

Dante’s red flowing coat was turned into a black hoodie and likewise, his signature long white hair was turned black and short. Developers were attempting to tap into the sense of ‘cool’ that originally inspired Dante, but by making him ‘cool’ by Western standards.

The story for DmC follows Dante as he’s recruited by Kat, a young psychic working for a shadowy organization of freedom fighters known as The Order that is led by Dante’s twin brother Vergil. While Dante and Vergil are still sons of Sparda, they’re also Nephilim, in this case, spawn of a demon and an angel.

As such, they were the only ones capable of defeating the Demon King Mundus, who secretly controls the city of Limbo Town through demonic use of energy drinks, media, and other on-the-nose methods from the alternate plane of Limbo.

When Mundus learned that the twins could potentially defeat him his forces attacked and killed their mother, Eva. Sparda hid the boys from Mundus, and wiped their memory so they wouldn’t be found. Vergil, having come into his own power, needs Dante’s help to break Mundus’ control over the mortal world.

Eventually, Dante defeats Mundus, but Vergil begins to assert that he must rule the humans in order to protect them from themselves. This also ties into Vergil and Dante’s relationship in previous games.

Devil May Cry 5: The Return of Dante

Nico is the daughter of Agnus, the scientist experimenting with demon power for the Order of the Sword in Devil May Cry 4. As the game opens Nero’s Devil Bringer arm is forcefully ripped from his body as a demonic tree begins to sprout from the center of the city. With the help of V, a mysterious stranger, Nero climbs to the top of the tree to find Dante along with Trish and Lady fighting a demonic entity known as Urizen.

Urizen proves too strong for the group, and they must split up and regroup in order to avert the demonic takeover.

Combat in Devil May Cry 5 is similar to previous iterations, with a few additions. The focus is still on stylish action, helped along by Dante’s ability to switch between melee weapons, ranged weapons, and fighting styles in the heat of battle.

Nero still relies on his Red Queen sword and Blue Rose revolver, but for much of the game also uses cybernetic arms known as Devil Breakers, each with their own abilities and strengths. Another playable character is the mysterious V, who doesn’t exactly use a weapon but attacks with a series of familiars, shadowy monsters who do his bidding. V’s only real weapon is his cane, which he uses to finish off weakened enemies.

Despite what many consider to be a misstep in DmC, the Devil May Cry franchise is still going strong. Fans are drawn to the intense combat that is easy to understand but difficult to master, as well as the characters and dialogue, which while admittedly often corny, still embody the sense of ‘cool’ the Hideki Kamiya was looking to create for Dante.

Devil May Cry 5 Announced for PC, PS4, Xbox One