The Disappearance Of Haruhi Suzumiya From The Decade That Followed 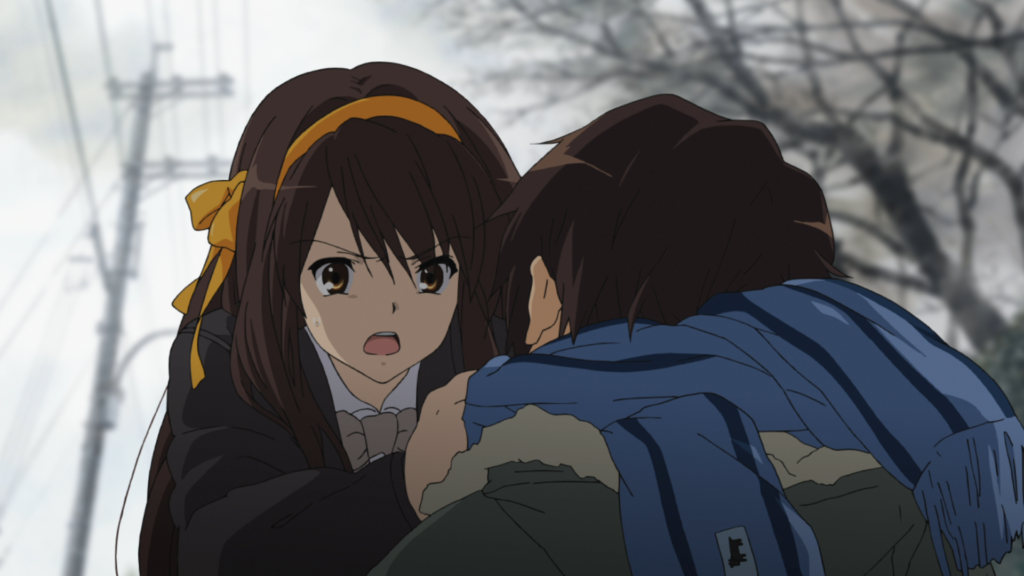 In today’s episode of ‘Wait, what did you just say? This super cool thing that I remember just coming out like it was yesterday is how old now? Ah F-‘ we’re going to look back at the once messiah of otaku culture Haruhi Suzumiya. To bludgeon you over the head with the point of this article, we’re going to be diving into The Disappearance of Haruhi as well as the disappearance of Haruhi Suzumiya. This February marks the tenth anniversary of her widely beloved, final canonical animated outing and, aside from weird alternate universe side story The Disappearance of Yuki Nagato-chan which aired in 2015,  we haven’t seen her since. While not the studio’s first big production, the original The Melancholy Of Haruhi Suzumiya TV anime earned Kyoto Animation the beginnings of their die-hard contingency of followers that shows like Clannad, K-On!, and Free! would build upon over the years. A fact that reminiscing upon now rings a little bittersweet.

As much as the sub-cultural landscape for fans has changed over the last 10 years, unfortunately, the 10th anniversary of the excellent The Disappearance Of Haruhi Suzumiya finds Kyoto Animation worse for the ware. When the news broke out that one of modern anime’s most cherished suffered from an active arson attack, turning into one of the most lethal massacres in Japan since World War 2 ended, cries of heartbreak could be heard from around the world.  36 lost their lives and the majority of one of its oldest studios and the materials inside it destroyed, to this day its still unthinkable that it happened at all. With over 30 million dollars raised for the studio and the families of those affected, the fan community came together to offer love and support to help offset some of the damage done. As the studio continues to rebuild and get back on track, with Violet Evergarden The Movie their first big release post-incident coming out in April, we wish them all the success in the world and look back at the girl who won us over all those years ago. 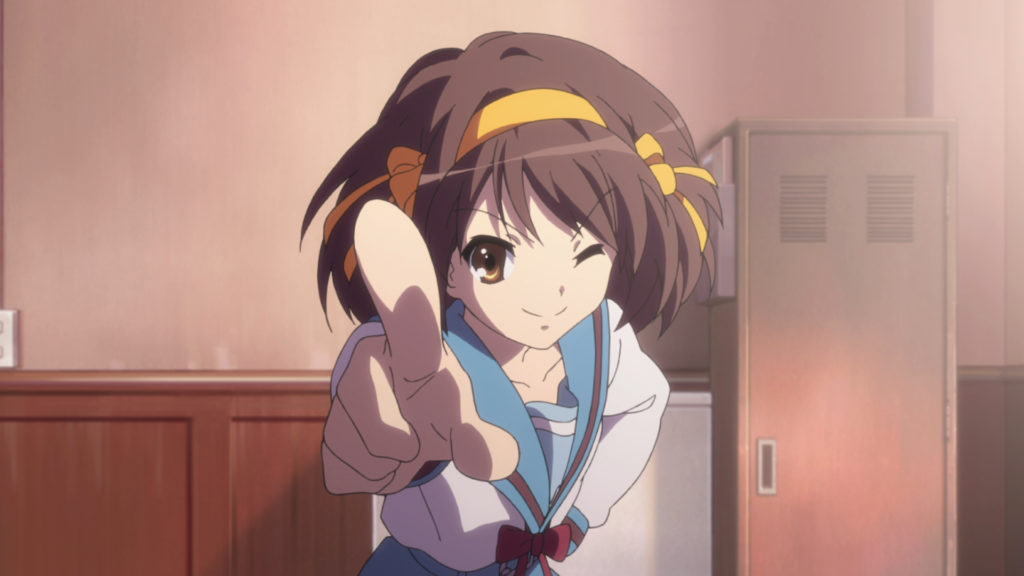 From the thousands of MADs people in Japan were uploading to Nico Nico Douga to the tens of thousands of people dancing the ‘Hare Hare Yukai’ in convention center hallways in America, not to mention to this day ‘God Knows…’ still being sung in Karaoke spots all oer the world, Haruhi Suzumiya was an international phenomenon. The spirited girl who unknowingly had the power of a god and her team of weirdos the SOS Brigade set the anime world on fire when they made the leap to animation in 2006 when the original The Melancholy Of Haruhi Suzumiya anime first came out. Of course we need to credit original light novel writer Nagaru Tanigawa and illustrator Noizi Ito for creating these characters in the first place. Admittedly though, it was the anime that marked a very special time and place in fandom; For the first time, western fandom caught up with Japan.

During the last vestiges of the pre-streaming era, the presence internet of the had grown so large that general anime fandom, which had grown exponentially since the Toonami era, figured how out how to finally stay current with Japan. Sure illegal fansubs and torrents had existed years prior, but by the mid 2000s information on what was coming out and how to get it was so readily available virtually anyone could make the leap. What separated Haruhi from other popular shows of the era  however was the international movement that came along with it.  Haruhi was not only a god within the confines of her own show, but she was too of the fans that were watching it and if you were the type to be on Gaia Online, 4chan, or huddled away in an IRC chatroom you too were watching Haruhi. As ‘Haruhiism’ spread throughout the Japanese otaku culture through ni-channel and Nico Nico Douga, it spread through our equivalents just as fiercely. That’s why Endless Eight was so painful.

To this day bring up Endless Eight around the wrong group of people and you’ll still see them grimace and shudder. When you’re older three years doesn’t seem like such a long time, but during the internet fandom’s younger days the three year gap between season one of The Melancholy of Haruhi Suzuimiya and season two was an eternity.  To add more injury to injury, when Haruhi Suzumiya’s most devout followers finally received their reward in the form of the second coming of the goddess herself, they were met eight episodes of the exact same thing. Call it what you want; An artistic experiment, a bad decision, a way for viewers to experience a fraction of a percent of the pain a certain character in the story feels, but reanimating the same episode 8 times and forcing audiences to sit through it didn’t sit well with anybody. You can still find listings for ‘I survived Endless Eight’ shirts on Red Bubble and the like. After a huge, radio silence filled delay, season two could have been the nail in the coffin for ‘Haruhiism’ if it wasn’t for what came after.

From the instant the above trailer dropped, with the haunting piano piece ‘Gymnopedie No. 1’ by Erik Satie looming in the background coupled with beautiful and sublime animation, all the pain endless eight caused fans vanished instantly. Instead, once again the community went full-on Haruhi mode as if The Disappearance of Haruhi Suzumiya was the true second coming after a botched attempt. When the film itself came out, I remember reading a story about one particularly inspired Japanese fan buying tickets for 100 separate screenings of the movie to support it. Excessive maybe, but its an act that shows just how devoted and fanatical people were towards Haruhi even years after the fact. Thankfully as well, there are worse films you could see 100 times as The Disappearance Of Haruhi Suzumiya ended up being one of the most compelling, gorgeous films ever made.

There are only two ‘bad’ things you could say about The Disappearance Of Haruhi Suzumiya; The first being that its too long, sitting at 162 making it the second-longest animated feature ever made, and that it wasn’t more Haruhi. As the title of the movie suggests, she disappears! Haruhi’s barely in the movie, or at least the Haruhi we all know. The whole film predicates itself on Kyon, the series’ sardonic protagonist, waking up in an altered reality where nobody remember’s Haruhi or the SOS Brigade. No stranger to time travelers, aliens, and ESPers, he sets out to set things right meeting alternate versions of the rest of the cast. While that could be used as a surface level ploy from some wacky fun hi-jinks, instead the film makes the right call taking itself and everything that Haruhi is seriously. Using the alternate characters to take an introspective turn, both Kyon and the viewer examine the relationships between characters, and asks what exactly everybody wants and why? It doesn’t hurt that the whole film has Kyoto Animation at their best, with no better word than perfect to describe the animation and then direction. 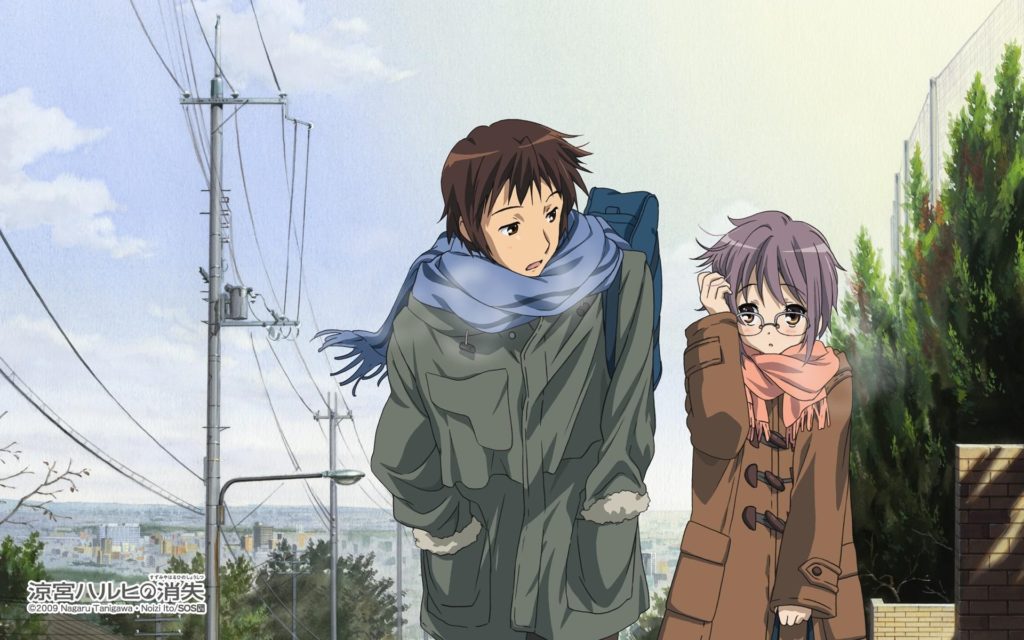 With people buying a hundred tickets each and earning loads of critical praise, you’d have expected The Disappearance Of Suzumiya to have kick-started a whole new era of Haruhi but instead, she was never seen again. Maybe after two seasons and a movie, the studio had wanted to move onto new things, or maybe they decided going out on the highest note possible would be fitting after the lows of endless eight.  Unfortunately, despite the renewed interest in the series fans were placed right back to the pre-season 2 status quo; Hoping for another season or film of Haruhi to materialize only to be met with silence. Kyoto Animation never out and said ‘hey, we’re done making Haruhi now’ nor were there ever any public disputes between author Nagaru Tanigawa and the studio. With seven volumes of the original light novels left unadapted, fans either held onto a sliver of hope of eventually forgot about their god altogether. Doesn’t make much difference either way, since they never had any more to go on.

Actually that’s not exactly true, with the 2015 spin-off The Melancholy Of Yuki Nagato-chan. An alternate version of the alternate universe in Disappearance, not even animated by Kyoto Animation, this new entry to the franchise was so far removed from being ‘more Haruhi’ that instead of being happy or angry, fans largely didn’t pay attention to the show after the first couple episodes. After Yuki Nagato-chan ended, the 2010s continued on without Haruhi ever being heard from again. The decade that she started with the biggest of bangs, with Disappearance originally showing in theaters February 6th, 2010, ended with her simply not anywhere. Hamming in the joke one more time, in our real-world we’ve witnessed the real disappearance of Haruhi Suzumiya. Whether, as Nietzsche puts it, we killed god ourselves or whether she simply got bored and wandered off to a place with more time travelers, aliens, and ESPers, we’re all worse off for the ware. 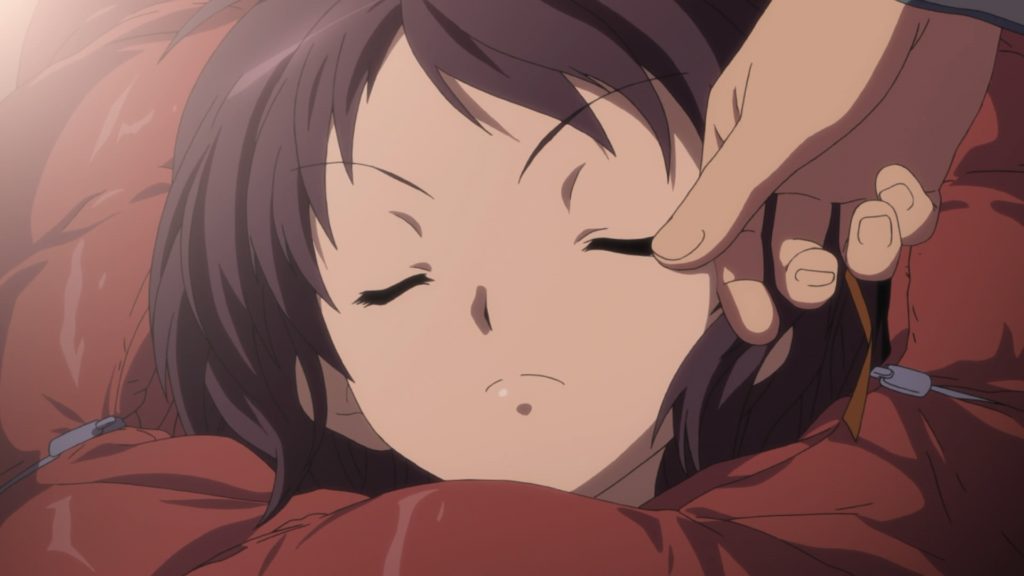 If you want to experience a huge piece of anime history, you can watch Haruhi Suzumiya on disc or online via Funimation.