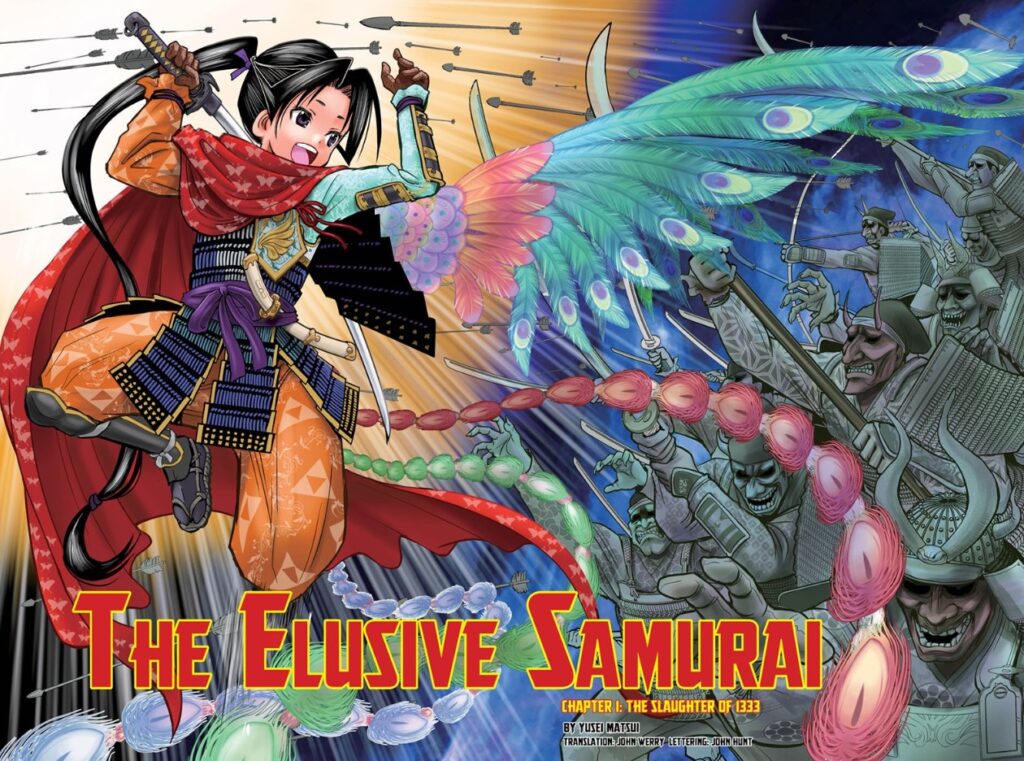 The beginning of a new week can only mean one thing: time for new Weekly Shonen Jump! This is where Jacob investigates the latest and greatest in the magazine, telling you what’s worth your time and what’s not. You can find coverage of other series under the tag Jump Time. Here’s The Elusive Samurai (Nige Jouzu no Wakagimi) chapter 1.

Yusei Matsui is back. There is a reason this news, alongside the return of Kenta Shinohara, filled so many fans of Weekly Shonen Jump with such joy when it first broke: Matsui has produced not one, but two excellent Jump series across his career: Neuro: Supernatural Detective (2005-2009) and Assassination Classroom (2012-2016). With any luck, this third time would prove a charm.

That being said, The Elusive Samurai chapter 1 makes it clear that this is a Yusei Matsui and Jump series like no other. First, it’s based on the real-life samurai Hojo Tokiyuki, who actually fought against the traitorous general Ashikaga Tadayoshi towards the end of the Kamakura period, all of which is explained in the opening chapter. To my knowledge, this is the first Jump series to be based on real Japanese history, apart from maybe Rurouni Kenshin, but even that was more inspired by history than based on it.

In any case, The Elusive Samurai chapter 1 also makes it clear that you shouldn’t head into this series expecting something along the lines of Neuro or AssClass. Instead of exploring a tight, infinitely repeatable concept such as solving mysteries or assassinating your teacher, it instead sets up for a much longer narrative journey, settling in to tell the entire life story of one Tojo Hokiyuki. This isn’t necessarily a bad thing, mind; just not something we’ve seen from Matsui before.

Even so, several parts of The Elusive Samurai chapter 1 have me worried that Matsui might not be cut out for exploring such a narrative. First, the character of Suwa Yorishige is introduced quite suddenly and in an abrasive manner, screaming loudly and shining brightly as his ‘holiness seeps out.’ Humor is ultimately subjective, so whether you find this gag funny is ultimately up to you, but I immediately began to dislike this character because of this gag. This is a shame, as he will no doubt go on to be one of the most important characters.

Second, The Elusive Prince chapter 1 finds itself in an unfortunate position, as it has to race through the entirety of the end of the Kamakura shogunate in a matter of pages, and introduce and explain its main characters and premise. Opening chapters are always hard to nail in this respect, but it must be said that it is much less attention-grabbing than something like Neuro or AssClass. Once again, this might be due to the difference in structure and premise.

Nevertheless, I’m willing to give Yusei Matsui and The Elusive Samurai the benefit of the doubt. It’s no secret that I’m a big fan of the author’s previous work, and my appetite for classical Japanese history has yet to be sated after finishing Dororo. I just hope that the next couple of chapters can make a better impression, or this third series might not be so lucky, after all!

You can read The Elusive Samurai chapter 1 for free via VIZ Media.