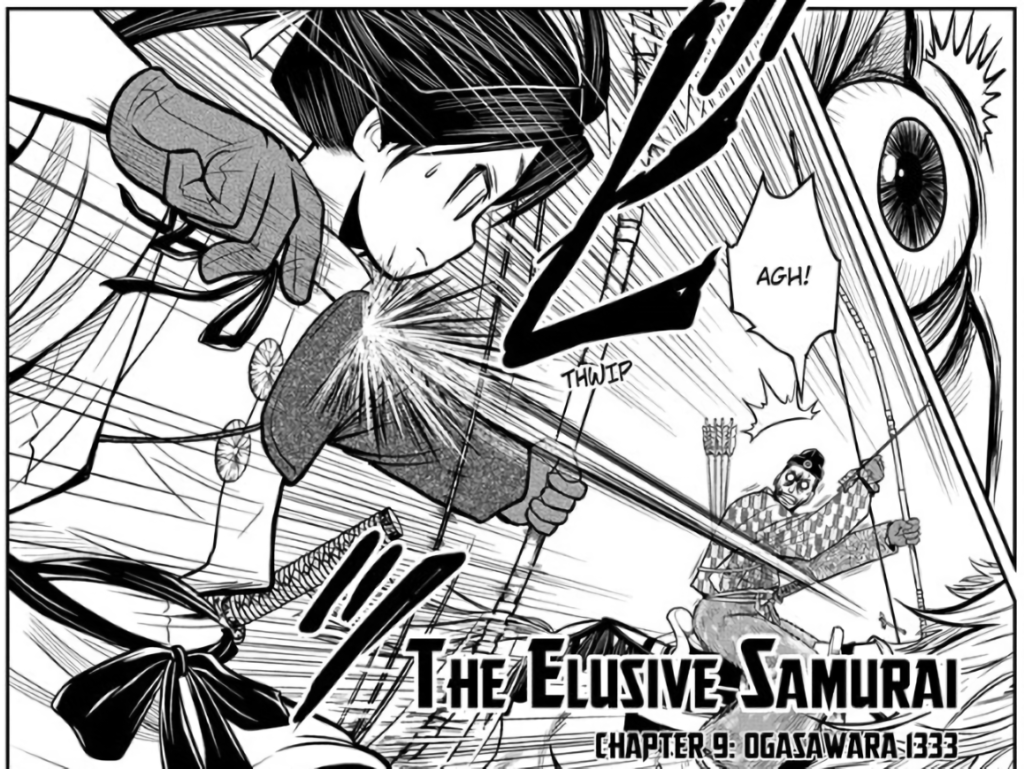 The beginning of a new week can only mean one thing: time for new Weekly Shonen Jump! This is where Jacob investigates the latest and greatest in the magazine, telling you what’s worth your time and what’s not. You can find coverage of other series under the tag Jump Time. Here’s The Elusive Samurai chapter 9.

Hojo Tokiyuki faces the fight of his life in The Elusive Samurai chapter 9: if he doesn’t win against the evil Ogasawara Sadamune in a horseback archery contest, then Suwa Yorishige will be forced to reveal his identity as the last surviving Hojo, who he has been sent to eliminate. These stakes provide this chapter with a palpable sense of tension, which series author Yusei Matsui utilizes very well to deliver a very competent piece of action storytelling.

To be honest, The Elusive Samurai hasn’t impressed me that much since it first launched back in January. That might be because there was too much hype, but there are other reasons: first, the art is a bit ugly; certainly unique, but not exactly what we’re accustomed to in Jump. Second, some of the characters are downright disgusting: Suwa Yorishige in particular, who never fails to annoy me with his smug personality and mistreatment of Tokiyuki. Nevertheless, he doesn’t appear once during this chapter, which is probably one of the reasons why I enjoyed it so much!

The idea of staging an archery battle on horseback is unique, and one that Yusei Matsui delivers on in spades. There’s so many twists and turns that it’s honestly hard to sum up: at first, Tokiyuki takes advantage of Ogasawara’s weaknesses to draw his ire and score points. But then, Sadamune decides to forgo the bow and enter his blind spot, turning the battle into one of horsemanship. Finally, Tokiyuki takes a blow to his head, which Ogasawara hopes will incapacitate him, but actually invigorates him.

Throughout the entirety of The Elusive Samurai chapter 9, there is a keen focus on character psychology and the tactics at play during this most unique of battles, and as a result, we finally get a real sense as to why Ogasawara is so feared, outside of what has already been explained.

In this sense, Matsui has finally proved that a samurai battle manga can actually work: he just needs to come up with interesting premises, and remove those that drag the writing down. So yeah: that means Suwa has to go!

You can read The Elusive Samurai chapter 9 for free via VIZ Media.