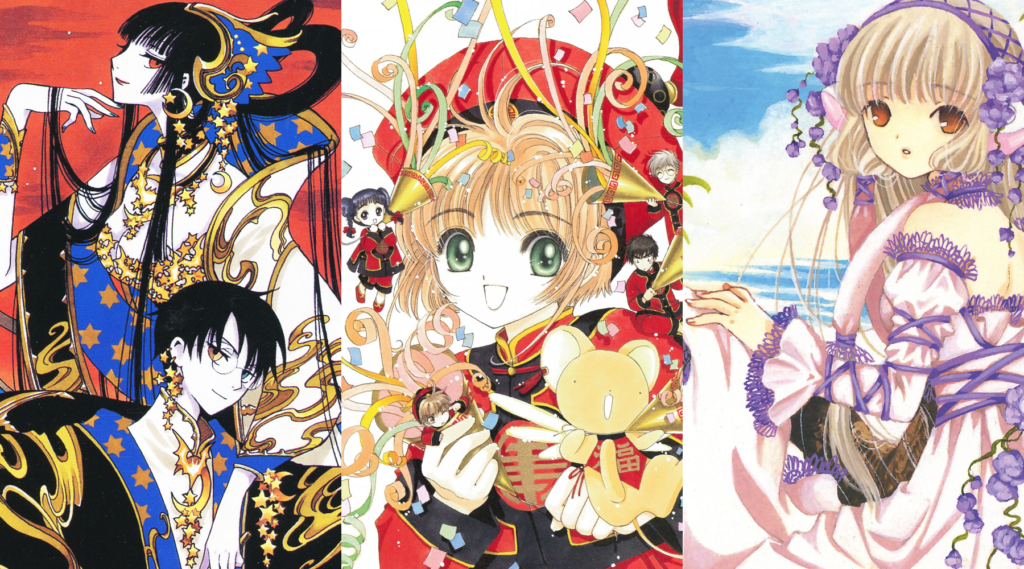 It is baffling that we live in a world where a Tokyo Babylon anime production would plagiarize real-world fashion instead of picking and choosing from the manga’s many incredible fashions. Clamp made their name sculpting one iconic series after another, and a huge part of what made works like Cardcaptor Sakura and xxxHolic popular is Clamp’s visual aesthetic, one which is heavily informed by their taste in clothing.

Of course the four-lady manga-making group is known for their wild set-ups and charismatic casts, turning them into an institution of the medium. To help curry air out the now canceled Tokyo Babylon 2021 stink, we’re sharing a list of not the best, but rather the most Clamp ‘Clamp manga’.

Someone should remind those producers where they should’ve been looking for inspiration.

Clamp School Detectives tells a relatively low stakes story, but Clamp always released shorter series like ‘Suki’ or ‘Wish’ accompanying their signature series. Out of all those breezier Clamp manga, Clamp School Detectives feels the most indulgent for the creators, and not just because they put their group-moniker in the title of the series!

Spinning off the two-volume Man of Many Faces, this three-volumes romp mostly acts as an excuse for the queens of manga to sketch-up a bunch of youth fashion while spinning a bunch of Ouran High School Host Club-type rich-kid stories along the way.

We’d recommend Clover over this in a vacuum, but if you just need to see Clamp being Clamp…

Some call it Clamp’s Naruto, other’s call it ‘just okay’, but when Tsubasa: Reservoir Chronicle first came out it was revolutionary. A Clamp manga that melded the worlds of Clamp manga, starring aged-up manifestations of the leading duo from Cardcaptor Sakura.

Crossing over with xxxHolic from the get-go, alternate universe versions of the Chobits girls, RG Veda boys, the entire X ensemble, and of course Rayearth’s Mokona amongst many others, all played a role in this otherwise conventional shonen-fantasy story.

Weirdly, what ended up being the most conventional Clamp manga was also the series most celebratory of their unforgettable legacy.

Occasionally X/1999, occasionally just X, Clamp’s gothic pre-apocalyptic tour de force of course makes the list of the most Clamp Clamp manga, even it’s been on infinite hiatus for the better part of two decades. Actually, considering Clamp’s penchant for just not finishing their manga, perhaps that makes X deserving of a spot.

A successor to their previous urban-mystic metropolitan tale Tokyo Babylon, X ups the stakes in every respect. Gorgeous fashions, wanton destruction, gorgeous swords, and a wonderfully incomprehensible plot that neither of its anime adaptations could properly make head or tales of. It stands as Clamp’s most ambitious title.

In terms of volume length Magic Knight Rayearth is one of the shorter Clamp manga out there. At just three volumes (or six counting its sequel), Rayearth gets counted amongst the big-boys on account of its dazzling imagery and wondrous world.

What would now be called a ‘proto-isekai’, Clamp’s classic tells the story of three adolescent ladies mysteriously zapping from Tokyo Tower to magicks-and-sorcery, having world blends elements of mahou shojo, traditional fantasy, and even mecha for good measure.

Everything from the school outfits to the armor to the mechanical design ooze with style was made by Clamp. It is rare that we get to see Clamp’s take on so many different standards.

We’ve already talked about X/1999, but we couldn’t also not include Tokyo Babylon, even despite its recent anime controversy. While X no doubt is the grander comic, Tokyo Babylon encapsulates so much of what Clamp does best: Department stores full of iconic fashions worn by the prettiest boys and girls you’ve ever seen, a Tokyo slightly exaggerated by the goth-fantastical exuding seductive energies, and a dumb on its face story that you forget’s dumb because the manga-world you’re spending time in is just too enticing.

Unlike its successor, it’s more self-contained and properly finishes up, making it a picture-perfect slice of delectably indulgent Clamp manga.