The Flaming Revenge of Inferno Cop 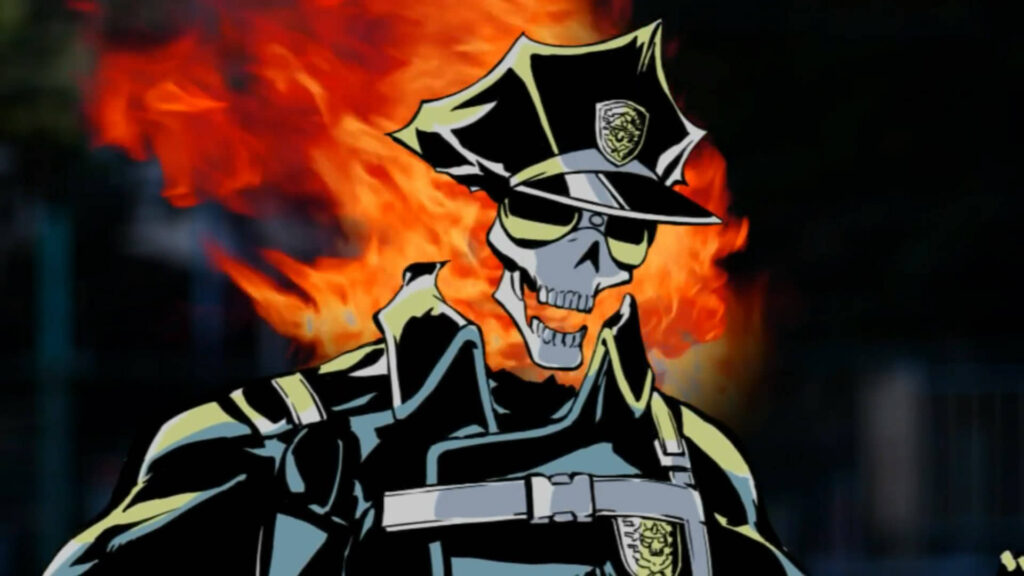 Inferno Cop was an anime that aired in 2013 and was directed by Akira Amemiya. The series production director was Hiroyuki Imaish and it was produced by Trigger and CoMix Wave. Although there has only been one season on 13 episodes, a second season was supposed to come out in February 2020, but this has been delayed due to the unfortunate passing of Junichi Goto, the voice actor of the Inferno Cop.

The series follows the character, Inferno Cop, who is a police officer who has a head of flames. He seeks retribution from the murder of his family by the shady deceptive organization, Southern Cross. They seek to control the world with intimidating characters and monsters.

Because of this Inferno Cop disperses ruthless justice to any and all lawbreakers, he comes across in Jack Knife Edge Town. His fights and stories are outlandish as he rapidly does from one to the next, like traveling through time, fighting zombies, transforming into an automobile and killing a mummy to take the place of pharaoh. He fights Southern Cross’ attempts to end the world as we know it.

The episodes are extremely short! At only 3 minutes, the whole series is about the length of one regular episode. However, there is still a sizable cast of recurring characters!

Inferno Cop also goes by Badge from Hell is a rugged skeleton cop with a flaming head and a strange super ability in his left hand. Although he is a cop he doesn’t really seem to have a moral compass of sense of justice beyond revenge.

Mecha Cop is the Inferno Cop’s evil twin that Southern Cop deviously created to take him down. He is much larger and has a blue flame around his head and has superior weapons as well.

Mr. Judge is one of the show’s antagonists that is strict in adhering to the word and way of justice. However, much like Inferno Cop he is no ordinary judge. He has a persona and is perhaps more like a superhero than anything else.

Hellfire Boy is Inferno Cop’s sidekick. It is uncertain whether this was always his form or if he was transformed by Inferno Cop. Bathed in the flames of hell while Inferno Cop returned to earth.

Last but not least is Cladua. She is a woman who is absolutely and utterly obsessed with Inferno Cop for whatever reason. She’s powerful and can transform the universe into match her desires and wants. She turns into another antagonist after Inferno Cop brutally rejects her.

With the first season and upcoming second season of Inferno Cop coming out, it isn’t the only Inferno Cop content available. Apparently he has a select appearance in Space Patrol Luluco as an acquaintance of the character Director-General Over Justice. In this series, it’s shown that is actually is a former Space Patrol member.

But then do the events in this series translate to Inferno Cop? Where in the chronology? It would seem most logical that Space Patrol Luluco comes after Inferno Cop since the series came out four years after. But, Inferno Cop supposedly is killed in the final fight against Claudia. So this would position Space Patrol Luluco as the prequel. But if a second season is coming out, did he not die in battle after all?

If so does that position season 2 before or after Space Patrol Luluco chronologically? Or perhaps season 2 is actually a prequel or nothing at all really to do with season 1. We will have to wait and see. It seems likely he died and then he has to once again take the staircase out of hell.

This is a bizarre and silly anime series that is a crude production with clearly a certain level of cheapness. The animation and character postures are unvaried as they struggle to hold one pose and bop around with limited mobility. The production value inherently informs the tone of the rest of the show.

The removal of the austere of allure to perhaps more bare parts reveals the pure silliness and comedic effect they are using. Inferno Cop is a hilarious rendering of self righteousness in a character that is just as selfish and dumb as the surrounding characters in the series while always seeming to be hungry! Definitely put on this series for some comedic relief in something truly bizarre and in under 40 minutes!