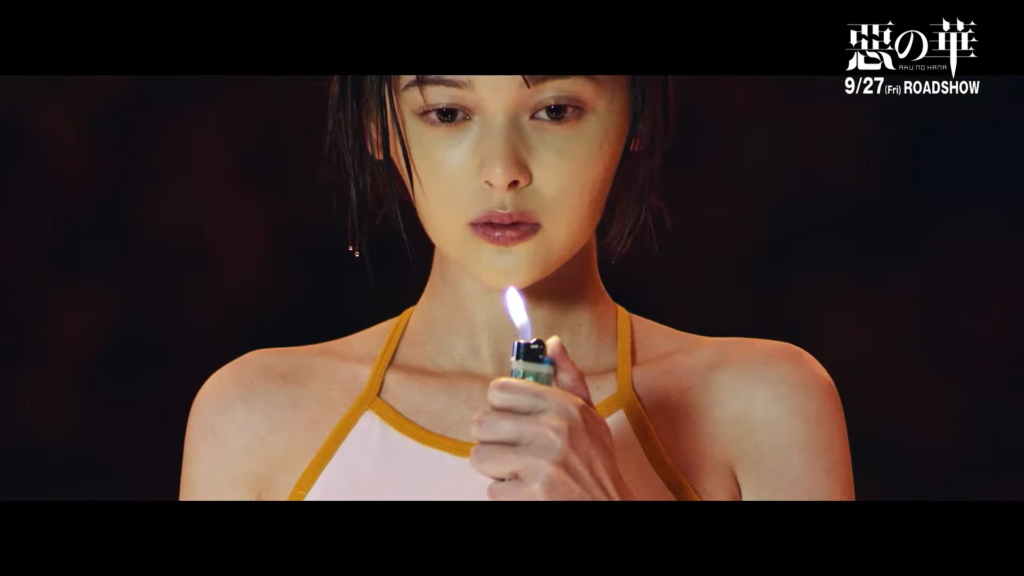 The Flowers Of Evil live-action movie is a seven out of ten. Not because it is only average but because it only averages out as such. The Mari Okada penned film based on Shuzo Oshimi’s cult hit manga about adolescent sexuality, alienation, and eventually, redemption has some incredibly high highs; There are a handful of scenes in this movie that alone make it worth the watch. However, some narrative choices really take away from the series’ one of a kind over-all effect. The 21-year-old Tina Tamashiro does a bang-up job of bringing the series’ signature devil child Sawa Nakamura to life and Kentaro Ito has some incredible moments with protagonist Takao Kasuga too. Saeki and Tokiwa play slightly abridged roles to their manga counter-parts which is a little unfortunate, but the sheer humanity put to screen makes up for it. If this film gets an international release, even if it’s not perfect, you really should go see this absolutely bombastic and generally successful adaptation of this decade’s most unique series…

Okay, that’s the end of my spoiler-free The Flowers Of Evil film review for general audiences and the uninitiated. Let’s actually get into this.

Like Charles Baudelaire’s original collection of people Les Fleurs du Mal is a sacred tomb to the young Takao Kasuga, so too was Shuzo Oshimi’s The Flowers Of Evil. As much as my first kiss or the first time getting my ass kicked, the events of the series are as real and set in stone for me as any significant part of my own personal history; Set in a dismal town with nothing to do and nowhere to go, Kasuga finds his crush Saeki’s gym clothes on the floor of his classroom when no one else is around and in a moment of panic decides to steal it. It turns out that the class weirdo Sawa Nakamura had seem him doing this evil deed but instead of snitching she blackmails him for her own personal amusement. Simultaneously through the power of plot he starts going out with Saeki, but his relationship with Nakamura sways him over more than more. Shit really starts to hit the fan and after a certain climatic event,  there’s a 3 year time-skip. The second half of the comic sees our protagonist as an empty husk until he meets Aya Tokiwa kick-starting the most poignant redemption arc I’ve ever read in a manga.

I first encountered The Flowers Of Evil when I was an intern for US-based manga publisher Vertical Inc. a lifetime ago. When I joined the company, they had just put out the first volume and being the type of sad-sack weeb whose favorite titles were your Neon Genesis Evangelions and Serial Experiments Lains, this instantly resonated with me. Part of my job was to write press releases and blog posts about the series but even in my free time I was pushing the manga onto all my friends; It really had become a part of my day to day life for a time, and doubly so when the controversial anime came out. You remember the roto-scoping, the endless walking shots, the harrowing ambiance and you either loved it or hated it. One Junji Ito was a big fan of the show and only okayed the upcoming Uzumaki anime, being helmed by The Flowers Of Evil anime director Hiroshi Nagahama, because he enjoyed it so much. Personally, I’m of the opinion that what the anime covers is actually better than the manga but because it never adapted the extremely different second half of the comic it’s hard to say which is the better complete product. Even after my year-long internship with Vertical finished, I was still buying each volume of the manga the day it came out until it ended. Earlier this year, a full five since the series wrapped up, I had found it stuck with me so much that I went ahead and got a Tattoo of Nakamura that’s just uhhh going to stay on me forever. 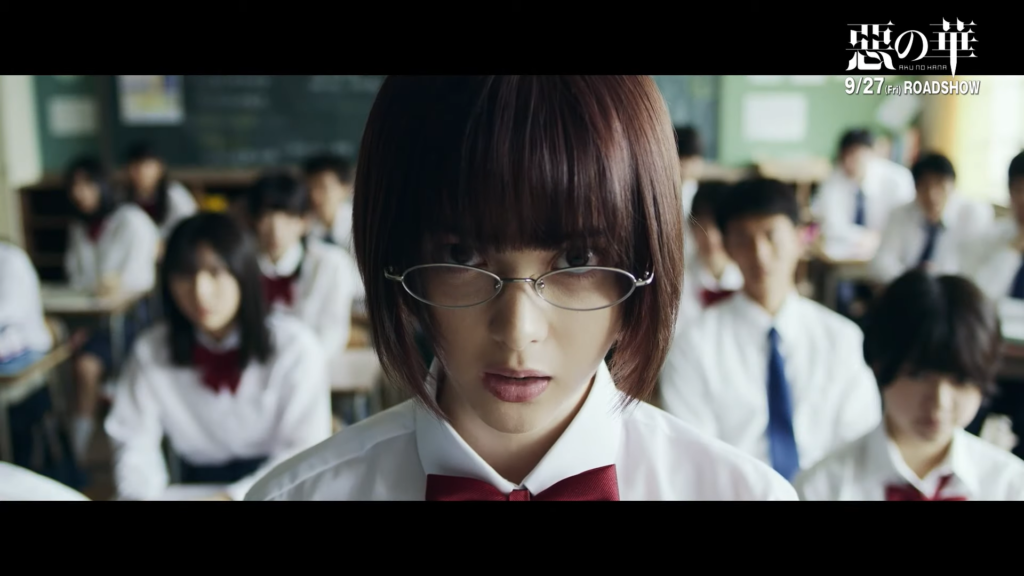 Needless to say when I first heard that The Flowers Of Evil was getting a film I was skeptical, to say the least. Even when they aren’t Hollywood atrocities, most live-action adaptations are middling at best with some exceptions like the first Nana. However, Toradora is another all-time favorite of mine so when Anohana writer and Maquia director Mari Okada was tapped as the script-writer I held onto some hope. Known for her emotional nuance and subversive characters, I wouldn’t have wanted anyone else on the project. You already know how I feel about this thing as a film; Okada and the team made a pretty good movie with a few stand out scenes that really do the series some justice. It’s the movie’s cohesiveness and the film as an adaptation where my potential love for it began to slightly falter.

I’m the type who doesn’t care about 100% accuracy in an adaptation as long as the spirit of the original is intact. Most of the narrative changes were small and what was omitted to keep the film around 2 hours didn’t raise an issue with me. The indescribable quality that makes The Flowers Of Evil what it is can be found here, although not to the extent of the manga and anime. Maybe just due to the fact that this is a live-action movie, the general tone is a little lighter and Okada does add a bit of humor into the script here and there. Not enough to get in the way of the story and characters though.

One thing that does come off with a different nuance is Sawa Nakamura herself; In the original comic she’s a hurricane; An act of god which ensnares Kasuga. Not to say that she doesn’t have some emotionally resonant moments, but she actually comes off as more human and more openly vulnerable in this film. It makes her less impactful as a force, but in exchange, she’s a more relatable character and as I said Tina Tamashiro really brings this troubled teen to life. I definitely enjoyed this humanizing take on her. Actually, I’d go as far as to say that despite Kasuga still being the protagonist and the lens in which the movie unfolds, Sawa Nakamura was the focal point of The Flowers Of Evil live-action. In service of making her the star, it made its biggest narrative change. Unfortunately, that had negative consequences. 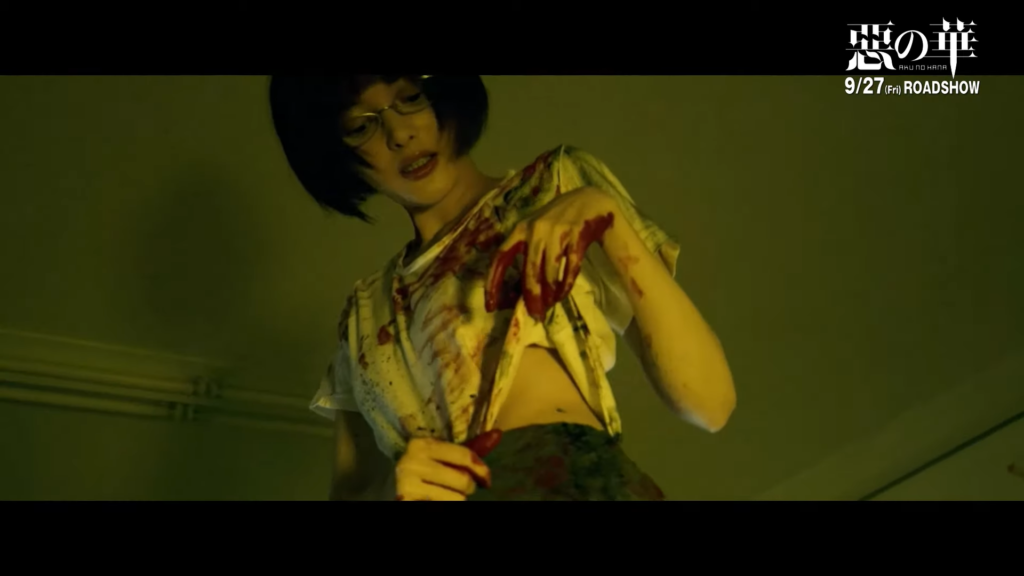 While the majority of events weren’t changed when they were portrayed was; Instead of the film having two halves pre and post time skip, it ops to start post time skip and flashback to Kasuga and Nakamura’s time together in Junior High. On paper, going the route could have worked but in practice, it really took away from Kasuga’s redemption arc and made Tokiwa more of a filler character than the absolute delight she is in the manga whose spirit basically brought Kasuga back to life. Ito makes Nakamura the focus, her and Kasuga’s pre-time skip climax happens basically right before the final climax of the story. Not plot-wise to be fair, you know it’s a flashback. Sandwiching in and abbreviating Kasuga’s high-school era Journey of coming to terms with Saeki, Nakamura, and his haunted past guts most of the impact it has. In the manga, despite being much slower and less edgy the first half, it’s the best part of the whole story. It goes back and gives the traumatic events additional context and impact. With the film’s structure, unfortunately, much of that is lost and it hurts the movie not only as an adaptation but even on its own terms.

That said, The Flowers Of Evil film gets the big scenes out of context right. The manga more or less has three signature events; There’s the classroom destruction scene which the anime covered and the climax of the first and second half, which it never got to. As a fan, I especially wanted to see the parts of the story that the anime never covered handled well, which is why the partial gutting of the second half didn’t sit well with me. Thankfully at the very least, these individual scenes brought tears to my eyes in the theater. Joy, sadness, regrets, it’s all there.  I’d go as far as to say the climax of the first half, Kasuga and Nakamura attempting to _______________ in the middle of a summer matsuri, was even stronger in the film than in the manga. They let the characters linger and say a little more, transferring their pain, their dissatisfaction with their town and the world directly into my heart. 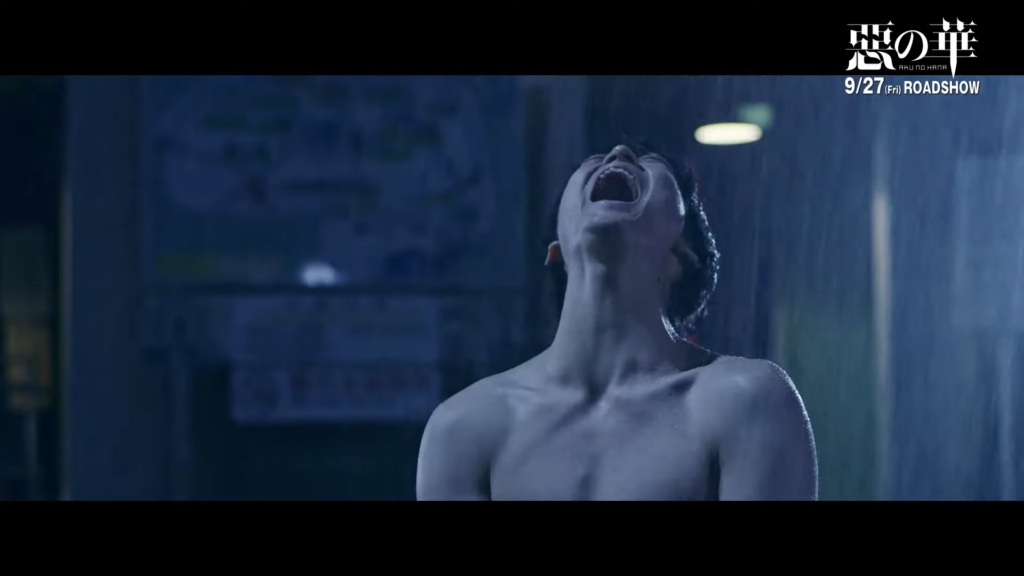 I never had never even considered the possibility of a The Flowers Of Evil live-action film nor was it something I ever wanted. The anime was actually a live-action adaptation of sorts and while I’ve always been sour it didn’t sell well enough to justify getting more of it, I’ve always been extremely satisfied with not. Now that the movie materialized and I went to go see it, I can confidentially say as the world’s biggest fan of the series that I’m glad it exists! With Mari Okada injecting some pep into the script and even giving us that more human Nakamura, we got a sweeping movie that had moments of being a worthy adaptation. Unfortunate that Kasuga’s redemption story played second fiddle. Ideally, the two halves of the story could have been made into two separate films but I’ll take the one we got. It was better than I expected it to be, just not as good as I hoped.

The Flowers Of Evil opened in Japanese theaters on September 27.