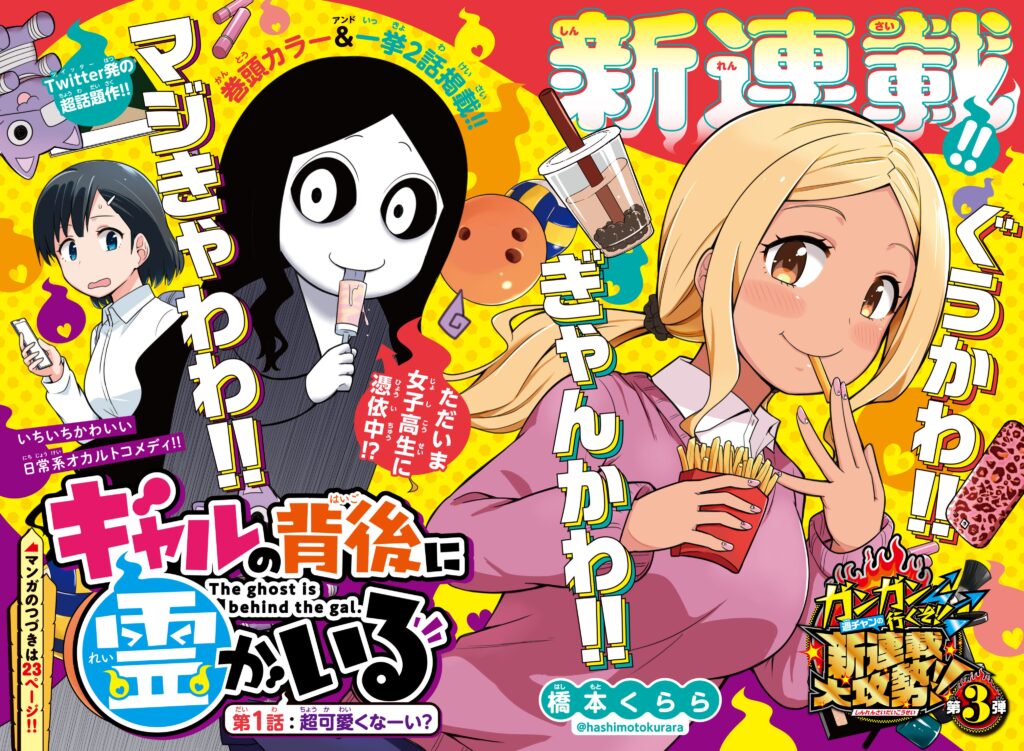 Weekly Shonen Champion has been on a roll with its comedy series as of late. Although Akita Shoten’s manga magazine is perhaps best known for its more action-oriented series – such as BEASTARS and Baki – its latest comedic ventures have been proving very popular. Strengthening that line-up looks to be Kurara Hashimoto’s The Ghost is Behind the Gal (Gyaru no Haigo ni Rei ga Iru), which already proved popular as a webcomic on Twitter.

The announcement that The Ghost is Behind the Gal would be getting a proper serialization was actually first made by the author himself back in October, but this week’s issue no. 49 of Weekly Shonen Champion carries the first chapter. In fact, it also carries the second, as it is a double feature.

Kurara Hashimoto started the Twitter webcomic back in June of this year, and it quickly became something of a viral hit. Hitting 20,000 like two days after, the first episode now stands at an impressive 121,000 retweets and 106,476 page views on Pixiv. The second episode also proved popular, currently standing at 82,000 retweets and apparently hitting 33,000 likes two days after it was originally posted. Again, it currently has 62,865 page views on Pixiv.

With all of this in mind, perhaps it is no surprise that Akita Shoten snapped up The Ghost is Behind the Gal for a serialization. The series will also be a good addition to the magazine: Koe ga Dasenai Shoujo wa “Kanojo ga Yasashi sugiru” to Omotteiru already recently took fifth place in this year’s Web Manga General Election, and Yankee JK Kuzuhana-chan’s first volume is on its third print run. Champion comedies are going strength to strength.

All of this puts to shame the idea that you have to navigate the traditional publisher system before becoming a successful manga author. Much like Souichirou Yamamoto and Saito Yuu before him, Kurara Hashimoto has managed to craft a successful career out of social media, sharing his works online and forcing publishers to poach them. Of course, it helps that he had an impressive following beforehand due to his excellent [email protected] fanart, but there we go.

The Ghost is Behind the Gal is currently serialized in Weekly Shonen Champion.