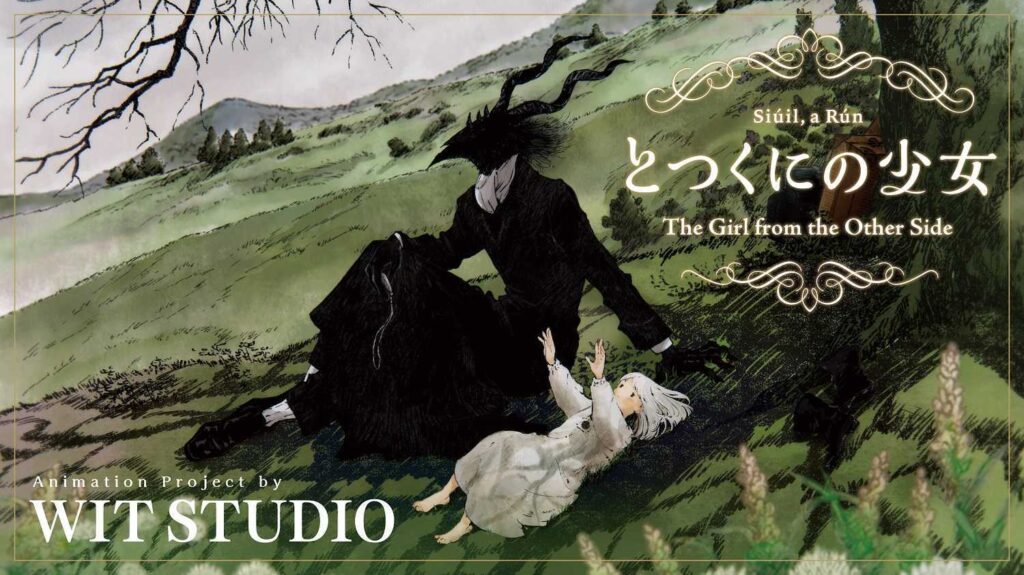 Ever since the end of Attack on Titan Season 3 Part 2 in 2018, Tokyo-based anime production company Wit Studio has seemingly been on a quest to reinvent itself. Having handed off the final season of Attack on Titan to Studio MAPPA due to scheduling issues, it released the Netflix anime original GREAT PRETENDER to great critical acclaim and promptly signed up for another in Vampire in the Garden. The recently announced Girl From the Other Side (Totsukuni no Shoujo) feature-length animation offers Wit Studio a golden opportunity to continue this trend, but only if they properly tackle the issue of adaptation.

This isn’t the first time that Wit Studio and the Girl From the Other Side manga (penned by Nagabe and published in Monthly Comic Garden) have crossed paths. In 2019, the studio produced a short, nine-minute OAD bundled in with the limited edition version of the eighth volume of the manga; for this feature-length animation, most of the staff are back, but with a twist: they’re asking for support via Kickstarter to make the project as good as possible.

In the Q&A section of the Kickstarter, Wit Studio make it very clear that ‘there is no risk of this project being completely aborted’ as a certain amount of funds has already been secured from the production committee. Even so, the extra money raised via Kickstarter will be used for two purposes: first, making the animation as high quality as possible, and paying for PR events. Wit Studio representative George Wada also hopes the project will be ‘an opportunity for animation production studios and anime fans all around the world to connect with each other, however little.’

Indeed, going back to the fans has worked well: the campaign has already smashed its initial goal of three million yen, with close to eight million raised as of the time of writing. It also fits in thematically with what Wit Studio have been trying to do over the past couple of years: reinvent themselves and their place in the industry, and establish what fans should expect from them.

It would have been easy for Wit Studio to rest on their laurels and continue to make more Attack on Titan, or even more Ancient Magus’ Bride, but the Production I.G. subsidiary has doubled down in recent years on its original goal of creating more unique projects. The Girl From the Other Side is just the latest step in this.

With this in mind, what should we expect from Wit Studio’s feature-length Girl From the Other Side animation? To answer this question, we’ll inevitably have to draw on the first OAD, which unfortunately isn’t available legally online in English anywhere. Perhaps someone will pick it up alongside the feature-length animation, but who knows.

First, this ‘feature-length’ animation is only going to be an hour long, so don’t expect an adaptation of the entire manga. If it was a little longer (say, 1 hour 30) then that could be a possibility, but trying to fit twelve volumes into such a small space of time seems like a fool’s errand. The first OAD did follow an original structure, incorporating elements from Nagabe’s original manga in its own way, but no amount of screenwriting trickery can really get over the limited timeframe set by the project.

The best thing that Wit Studio could do for the Girl From the Other Side feature-length animation is adapt as much of the story as they feel the need to, because the animation really is the main draw here. To be quite honest, the first OAD features some of the best animation I’ve ever seen: particularly the final few scenes, with Teacher rushing to find Shiva when she turns up missing and then taking a boat trip on a lake, are simply breathtaking. What’s interesting is that while the anime doesn’t use nearly as much white and dark as the original manga, it more than makes up for this with the textured color and art design: the way that the character outlines move and jitter also goes a long way in creating that ‘picture book’ feel, reminiscent of the fairytales of old.

Much of the original OAD’s incredible animation can be attributed to the kind of staffers that Wit Studio recruited for the project, so it is good to know that most of them are coming back for the feature-length Girl From the Other Side animation. Particularly noteworthy are the two directors, Yutaro Kubo and Satomi Maiya: both of them have their origins in art animation and short films, which is why they are able to bring something unique to a studio that is usually heavily associated with the standards of ‘anime.’ 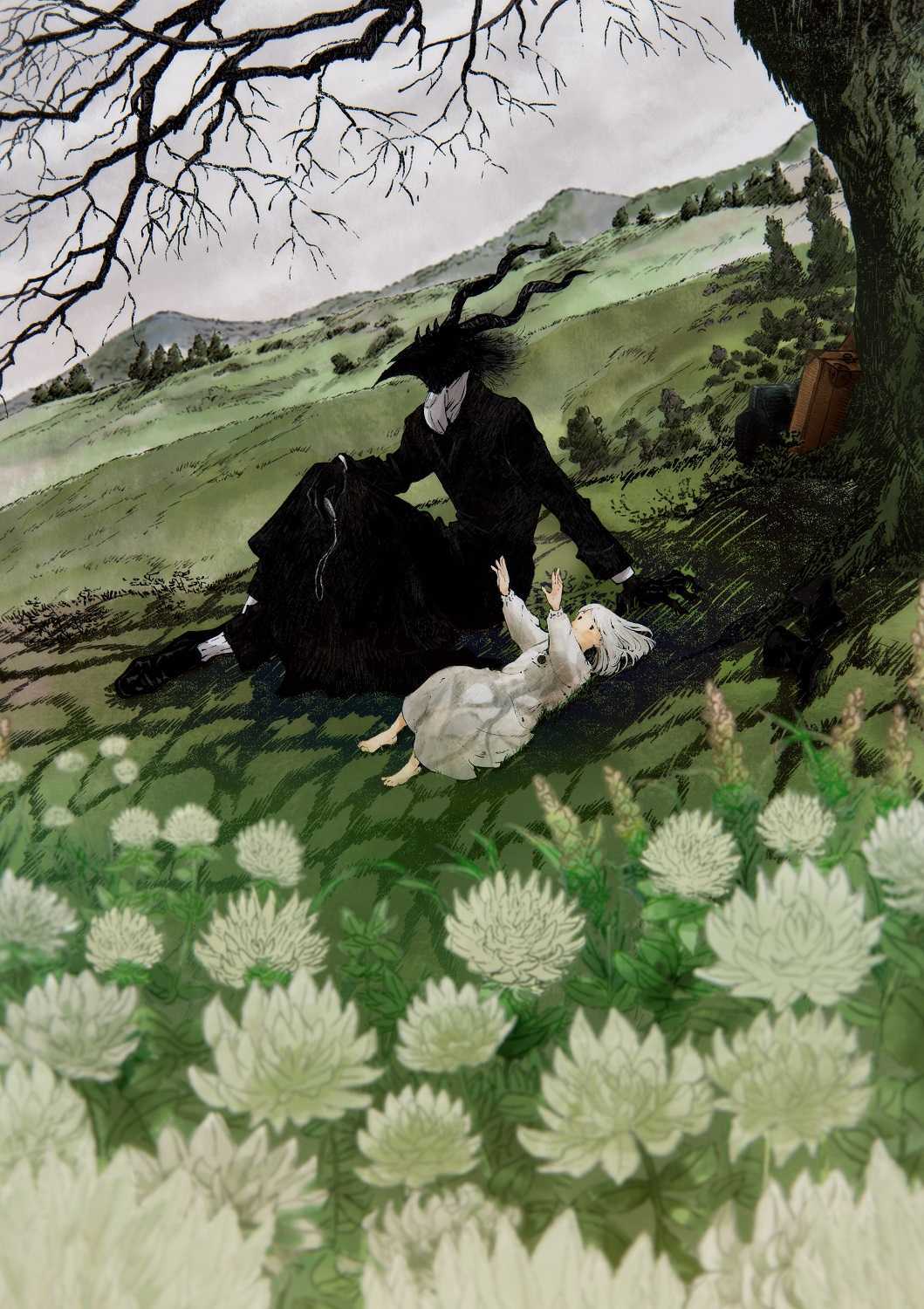 Producer Kenta Yamada underlines how important the creation of ‘animation that is not bound by the framework of animation even though it will be an animation’ is to the project on the Kickstarter page, so it’s quite clear that Wit Studio knows where their priorities lie. Furthermore, given that the money will be used to further polish the animation (a video on the page highlights the difference that careful lighting choices can make to a scene) we can probably expect this OAD to be even more accomplished than the previous one. That’s an exciting thought.

The only major difference between the creative approach to the original OAD and the feature-length animation is that there will be voice acting, with Jun Fukuyama taking up the role of Teacher and Rie Takahashi that of Shiva. These are excellent voice actors with years of experience, so no doubt they’ll bring a lot of talent to the roles, but their addition does mark a fairly large departure from the original, voiceless OAD, which got along just fine with music and sound effects.

That being said, voices likely weren’t added to the original OAD given the small scope of the project, and it’s quite hard to imagine Nagabe’s manga being properly adapted in a longer form without voice work. It certainly would’ve been interesting to see Wit Studio attempt to take a silent adaptation on, but this probably wouldn’t have been worth it.

It would be no understatement to say that the Girl From the Other Side feature-length animation marks a golden opportunity for Wit Studio. Given their apparent goal of reinventing themselves in the industry and in the eyes of fans, asking for their direct support to produce such a unique and highly anticipated adaptation was a good move.

Furthermore, the standard set by the first OAD and the continuity between the staff for this feature-length animation makes it clear that we can expect the same sort of boundary-pushing work this time around, more in line with actual ‘animation’ as opposed to ‘anime.’ The only challenge will be, however, how they manage to grapple with the fairly short runtime.

You can read The Girl From the Other Side via Seven Seas Entertainment. Consider supporting Wit Studio’s feature-length animation project on Kickstarter, too: there are a bunch of great rewards on offer!

Uncovering the Varied Influences of The Girl From the Other Side