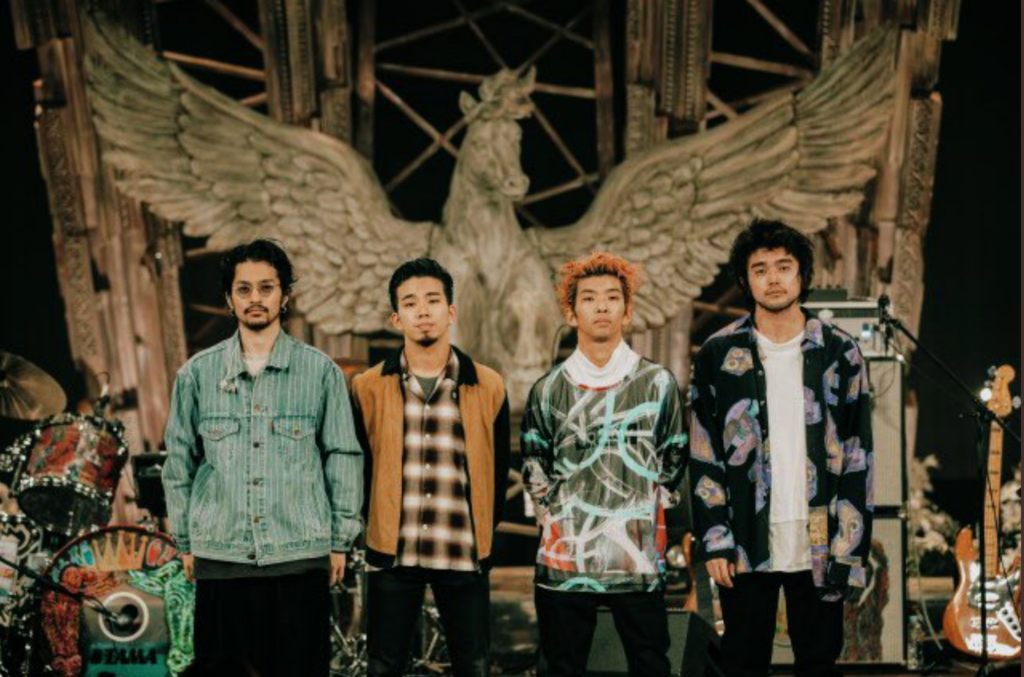 In this new feature, Otaquest aims to help introduce some of Japan’s best musicians to the world. Today, a breakout Japanese band adding a dash of unpredictability to the nation’s mainstream rock scene.

NHK’s annual Kohaku Uta Gassen offers a nation of viewers stuck at home for New Year’s Eve the chance to catch up on the biggest J-pop acts of the preceding 12 months. It also serves up a lot of spectacle, from old-school goofballery (think giant stages shaped like animals and performer’s own heads) to more internet-age stabs at meme-ry (the world’s longest series of kendama completions done consecutively being a good recent example).

Rock band King Gnu, however, left an impression at the 2019 edition by keeping it simple. The quartet took the stage, played their breakout hit “Hakujitsu,” and avoided any unnecessary detours. This won them praise online and in the Japanese music press — on a show known for getting over the top they placed the emphasis on their music, which is how a lot of people think it should be.

That’s one of the more mild examples of how King Gnu has rocketed up from indie project to the vanguard of a new generation of Japanese rock. The four-piece doesn’t limit themselves to the traditional band sound that has proven so well in the country but rather can pivot from megaphone-assisted moshers to slow-burning ballads to synth-dappled numbers. The group’s lyrics offer a mix of sharp-eyed details for life in Tokyo today and more universal topics about love and youth delivered in a shout-along style.

They’ve become one of the top young acts in the country, and have even spawned side projects introducing a more general audience to left-of-center experiments.

To understand King Gnu, you first have to grapple with Srv. Vinci. This was member Daiki Tsuneta’s electronic project before helping to form the band that would shoot him into the Japanese music stratosphere. While sonically there aren’t a ton of connecting points (if anything, it’s Tsuneta’s millennium parade in utero, more on that later), it does offer some insight into Tsuneta’s creative process. Primarily, an openness to getting weird. None of the Srv. Vinci is essential, but check out a sample below.

That project also served as the early form for what would become King Gnu — a far, far catchier name — and after a slightly different lineup at the start, the group cemented into Tsuneta, Yu Seki, Kazuki Arai and Satoru Iguchi. After a few years playing together, they released their proper debut album in 2017.

Tokyo Rendez-Vous (above) established the King Gnu approach just right. Megaphoned vocals nodding to Rage Against The Machine pop out throughout, while the band compliment drum playing with machine-created beats inspired by hip-hop. One song uses electronic flourishes to create a slow-motion pace, while they even weave in string sections for the cinematic closing number. Songs shout out the haunts of young people in modern Tokyo — McDonald’s, night pools — and work in a little more bite than most dreamy rock groups. It isn’t about a happy ending, but rather making the most of everything leading up to the finish.

From there, momentum built for King Gnu. They gained a strong live following and jumped over to a major label. In 2019, they put out Sympa, further showing their eclectic approach to the idea of Japanese rock. Strings and all-together-now choruses popped up more (“Slumberland,” “It’s a small world”) while they also continued to play around with the texture of voices and melodies (the aquatic burble of “Bedtown,” the indie-pop-gone-sour of “Sorrows”). Listen below.

An Aside On millennium parade

During all of this, Tsuneta continued on with a electronic solo project, called millennium parade that, in the years since King Gnu started blowing up, has also enjoyed greater time in the spotlight. You can go through the Otaquest archives to get a sense of what they are all about, but the key thing to know about that project is it allows Tsuneta a space to play around with the ideas that probably wouldn’t fly in a group suddenly topping local charts and appearing on weekly music shows. It’s also a nice reminder of how a bigger artist can use newfound attention to push sounds that normally don’t get mainstream attention towards suddenly eager ears. That wouldn’t have been possible, however, without….

“Hakujitsu” is a weird super hit. It teases balladry but contorts into a marching rock number thanks in part to some electronic percussion. It teases breaking apart, but always holds together just enough, climaxing in a big ol’ soaring passage that never turns gloopy. It’s an impressive balancing act, and became one of 2019’s biggest breakout hits, pushing King Gnu to a new level.

They were coronated up into the upper echelons of Japanese music earlier this year with CEREMONY, their third album. Featuring “Hakujitsu” and plenty more numbers displaying a mix of sweetness and goofy energy (“Teenager Forever” being a high point for the latter), it confirmed they were one of the biggest groups to emerge in quite some time. What they do from that position is up to them, but they haven’t stopped mixing it up yet.

An early highlight, “McDonald Romance” balances their shaggier characteristics with a melancholy running through the whole number via the lyrics and those keyboard swells.

King Gnu’s ability to get wild but never break apart is central to their success, and this upbeat bit of mania showcases it well.

Sometimes, simple is best. This cut from their second album highlights a side of King Gnu closer to indie-pop than the twistier stuff they are known best for.

Their breakthrough hit, which tightropes between J-pop balladry and rock swagger just right.

A reminder that, despite mainstream status, they are still ready to have some fun.