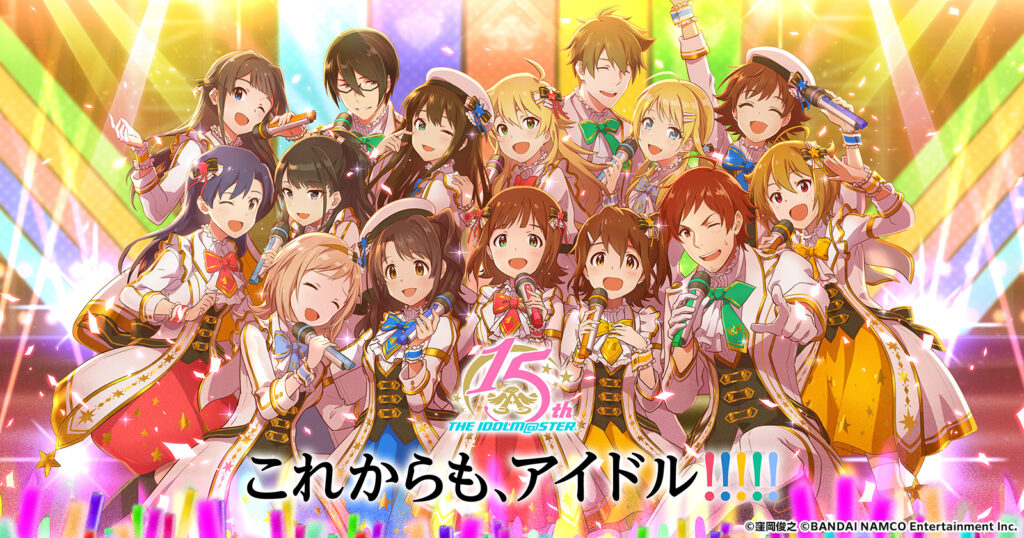 July 26, 2005 was the day, fifteen years ago, that the original [email protected] arcade game hit Japanese arcades. Since then, Bandai Namco Entertainment’s “idol raising” series has outgrown that little cabinet, spanning multiple games, anime, sub-series, and generations – changing the face of Japanese pop culture as we know it.

Yet, as a result, it can appear to be impenetrable from the outside: how are you supposed to know where to start when there are so many starting points? In this sense, this short history of The [email protected] on its 15th anniversary intends not only to educate, but also evangelise – if it can provide one more person with the joy that this author has had over the years thanks to this franchise, then it will have been worth it.

The story of The [email protected] leading up to its 15th anniversary begins, as most stories do, at the beginning. The fact that the original [email protected] arcade game is often referred to as ‘Akemasu’ (a portmanteau of ‘arcade’ and ‘master’) is perhaps prophetic, as ‘akemasu’ in Japanese can also mean ‘to begin.’ It would certainly begin an epic journey, spanning multiple different forms, but no one could have hardly expected it to do so.

When director Akihiro Ishihara was coming up with the idea for the game, he was primarily interested in creating a game that would utilise the magnetic strip technology that had entered the arcade space in the 2000s. While it may seem simplistic now, this revolutionary technology would allow players to save data onto cards and come back to their save file or progress later on – bringing the magic of the home console into the arcades.

Ishihara was very much influenced by the idol culture of the 2000s, which was just experiencing a rebirth thanks to the popularity of Morning Musume and AKB48. He was also influenced by bishoujo visual novel games, which were just gaining popularity in the home PC scene at the time, as well as horse racing simulation games – the idea of “raising” idols, in fact, came from this unlikely source.

As a result, the original [email protected] was a hodge-podge of wildly different ideas that somehow, despite everything, proved incredibly popular. The fact that there was no precedent for this type of game made development long and arduous, but multiple sources attest to the fact that there were long lines out of the arcade to play the original game on the day of its release.

What’s more, if you look at some gameplay footage of the original [email protected] game now, 15 years later, you may be shocked to learn that much of it has gone unchanged. The basic balance between RPG-like ‘Lesson’ sections and visual novel-style ‘Communication’ sections still remains to this day, with only the ‘Audition’ section being expanded later with the introduction of rhythm game elements. Still, Bandai Namco had a hit on their hands – and they weren’t about to lose it.

Success and Development: 2nd Vision and Beyond

Of course, the question begs itself: why were consumers so keen to play The [email protected] at the time of its release? To a certain extent, this was because there was nothing quite like it, being the progenitor of all of the numerous virtual idol franchises that exist today.

But, at its core, The [email protected] succeeded on the basis of its characters: much like ‘real’ idols, players formed a connection with them that was assisted and even encouraged by the gameplay (its location away from the home and in arcades meant that a salaryman could come and play after work, for example).

Almost immediately, Bandai Namco realised the multimedia potential of the series. Alongside CD releases, they wasted no time putting together live events: the first was in 2004 to promote the upcoming release of the game, while January 2006 was the first public-facing event. Then, July saw the first large-scale [email protected] concert: welcoming hundreds of fans and all of the voice cast, it started a tradition that has continued every year since.

The series’ first console release came in 2007 with The [email protected], released exclusively for the Xbox 360 and consisting of essentially a port of the arcade original. 2008’s Live For You! was the first iteration, expanding on the ‘Audition’ sections of the arcade game and adding what many consider to be rhythm game elements for the very first time.

Releases continued almost yearly up until 2012, when the 7th Anniversary live brought together the entire voice cast for the first time in two years. Not only was this a cause for celebration, it was also a turning point for a series that had already launched a successful TV anime, home console follow-up, and a new sub-series in the form of Cinderella Girls in 2011.

Million Live! and Cinderella Girls: From Series to Franchise

It is at this point that The [email protected] turns from a simple idol raising series into a multimedia empire. This process had, in reality, been unfolding for years, but it is the addition of Cinderella Girls to the roster that forces us now to refer to it as such.

At this point, it is also probably useful if we give a brief breakdown of all of the constituent parts of the [email protected] franchise as of its 15th anniversary. First up, we have the original series and cast of characters, often referred to as “765Pro Allstars (AS)” after the fictional entertainment agency that they work at.

Next up we have Cinderella Girls, which launched in 2011 as a mobile game and occupies a distinct space away from the original, “Allstars” series. Not only does it take place at another entertainment agency (876 Production), it also took a very different approach to characters from the original series: introducing hundreds of them at a time and not always assigning voice actors right away. This is what fuels in the modern day the hotly-contested ‘elections,’ the winners of which are often given a voice if they do not already have one.

Meanwhile, Million Live! is a continuation of and extension to the original All Stars cast and series. Introducing 37 new characters (later 39), it expanded the number of idols working at 765 Production and featured appearances from them. It too began life as a mobile game in 2013, before moving later to a rhythm game called Theater Days in 2017.

Then, we have the outliers. SideM is a female-oriented sub-series composed entirely of male idols, although there is a lot here for male fans to enjoy as well. Unsurprisingly, it too began life as a mobile game in 2014 before moving to a rhythm game in 2017, but also enjoys a strong link with the original All Stars series: Jupiter, an all-male idol group who appeared as rivals in The [email protected] 2, make up the core of this sub-series alongside a large cast of original characters.

Also making an appearance in SideM is Ryo Akizuki from Dearly Stars, another entry in the franchise that began life as a Nintendo DS game in 2009 but is, unfortunately, the only part of [email protected] franchise that hasn’t lasted until the 15th anniversary milestone. This is probably because the other two characters that the game focuses on, Eri and Ai, are voiced by Hana Kanazawa and Haruka Tomatsu respectively – they’re probably far too busy now to come back!

Finally, Shiny Colors is the latest addition to the [email protected] franchise, launching as a social game for Bandai Namco’s new enza online game platform in 2018. This entry is actually quite interesting, as it seeks to directly recapture the “idol raising” concept of the original arcade game – bringing the whole story full circle.

The [email protected] 15th Anniversary: A Question of Legacy

As it stands on its 15th anniversary, then, The [email protected] franchise is made up of five different active-subseries that each have their own games, characters, and unique concept. That number alone is astonishing, and doesn’t even account for all of the thousands of hours of gameplay, songs, and character interactions that this adds up to – the problem that The [email protected] faces on the eve of its 15th anniversary, then, is one of legacy.

How do you go about getting into a franchise with so many different constituent parts? That depends on what you are looking for. If you just want to jam out to some cool music and play a rhythm game, then download Cinderella Girls: Starlight Stage and follow resources such as @deresute_eng as best you can to figure out what to do. If you want to actually spend some time with the characters and get to know the story, however, then I’d recommend without a heartbeat checking out the 2011 anime – that was what got me into the series, and I still enjoy watching it to this day.

All of this, of course, comes with the massive caveat that most of the material is only available in Japanese and does not have an official release. While Crunchyroll has streamed some of the anime, including the 2015 Cinderella Girls series, none of the games have yet to make their way over to English-speaking territories. Theater Days has been released in Korean and Taiwanese, but site analytics tell us that not many of our readers speak those two languages: unfortunately for English speakers, you’re stuck with either learning Japanese or simply closing your eyes and holding the skip button.

Another problem blighting the series is one of differing trajectories. While SideM and Million Live! remain relatively unknown (the upcoming Million Live! anime might change this), the Cinderella Girls series has garnered a large English-speaking following, mostly on account of its wide range of characters. What you have, then, is a portion of the fanbase who remain conscious of the franchise’s multifaceted nature, while another is mostly ignorant. That can be annoying, especially for hardcore fans.

Luckily, the upcoming Starlit Season looks to remedy this. By bringing characters from Allstars, Million Live! and Cinderella Girls together for the first time, this latest home console release could be the way in which certain parts of the fanbase are introduced to other parts of the franchise. Plus, considering that it is also coming to Steam, English patches (official or unofficial) are bound to be provided at some point.

Finally, perhaps that is the most beautiful thing about being a fan of The [email protected]. There is, despite the franchise’s multifaceted nature and inaccessibility to western fans, a strong fan community surrounding the fifteen-year old series that is still going strong today. This is something I’ve experienced both online thanks to helpful resources such as @mirishita_eng and @deresute_eng, as well as in person, when events bring us together.

So whether you’re a lapsed fan or a complete rookie, consider jumping into at least one of the starting points provided for The [email protected] on its 15th anniversary – you’ll find a friendly and passionate fan community there to help you every step of the way.