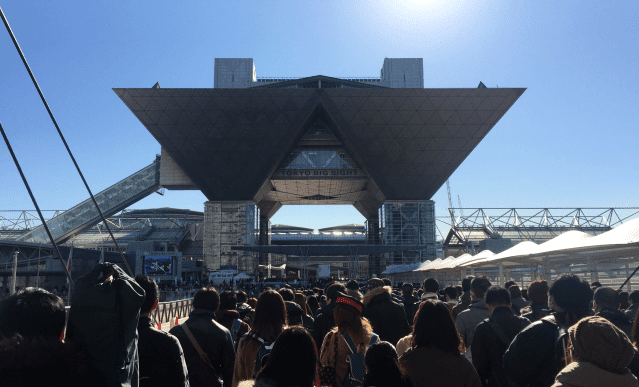 It is considered to be (probably) the oldest anime convention on the planet.  It is typically one of the bigger conventions, if not the biggest.

Even if you haven’t been to Comiket, if you are an anime fan, you are probably familiar with it.

First of all, it receives a lot of attention — mostly from Japanese fans, of course. But it also gets coverage from international otaku speaking Italian, Arabic, and so on, and sometimes even mainstream sources such as the Daily Mail and CNN.

Anime shows with an otaku focus will often have episodes where the main characters go to Comiket. There will be jokes about surviving the giant crowds, cosplayers, getting the two main halls mixed up, and finding that one manga you absolutely must-have.

If the characters create their own manga, Comiket will be the equivalent of going to the Koshien baseball tournament. They aren’t there to look around, they’re there to sell.

Comiket is short for Comic Market. The name is one of those Japanese portmanteau abbreviations, such as Pokémon (Poketto Monsuta) or WataMote (Watashi ga Motenai no wa Do Kangaetemo Omaera ga Warui!).   It is also known as Comike or Comic Market (Comiket).

Unlike some conventions we could mention, Comiket is fan-based and very fan-oriented.  To be specific, the convention is dedicated primarily to doujinshi (dojinshi), or self-published comics.

Doujinshi has a reputation for derivative “fanwork” stories based on an existing manga or anime property. But the category also includes original content produced by independent manga artists. Independently-produced video games, music and other items are also sold at Comiket.

Large anime companies also take part in Comiket, with official booths and exhibits.  However, Comiket is a nonprofit event run by volunteers.

In recent years, most Comiket events have been held at the gigantic and alien-looking Tokyo Big Sight, in Ariake on the island of Odaiba in Tokyo.  Last year’s Comiket 96 and Comiket 97 were divided between Tokyo Big Sight and Aomi Exhibition Hall. (More on the reasons for this below.)

This counting system does not include Comiket-related “Comic Market Specials” held at different locations in Japan.

Comiket is typically held in August and December. The August event is also known as Natsu-Comi (or “Summer Comiket”), while the December one is FuyuComi (or Winter Comiket). From 1975 to 1983, there was also an April, or Spring Comiket.

Consider that the 2019 Anime Expo had an estimated 115,000 people in attendance. And it was pretty crowded (admittedly, the Los Angeles Convention Center is smaller than Tokyo Big Sight, so it would feel crowded). Now almost double that number. Yikes.

The first Comiket took place on December 21, 1975.  It was a one-day event and only an estimated 700 people attended.  It took place in Nissho Hall, a multi-purpose event hall in Toranomon, Tokyo.

Comiket moved to Tokyo Big Sight in August of 1996 with Comiket 50.

In 2019, Comiket made a couple of changes.  With Tokyo preparing for the 2020 Summer Olympics,  Comiket 96 and Comiket 97 had to be split between Tokyo Big Sight and Aomi Exhibition Hall.

Aomi Exhibition Hall is officially part of Tokyo Big Sight, but it is about a mile away from the main venue.

Comiket 96 also marked the first time that Comiket had an admission fee.  Visitors had to purchase wristbands for each of the four days Comiket was held.

Prior to this, Comiket was free for anime and manga fans to attend. Doujinshi creators had to pay a fee, and cosplayers had to pay to use the changing rooms.

Comiket 98 (2020) was scheduled to take place in May — during the middle of Japan’s Golden Week vacation. It was anticipated that this event would also be split between the two venues.

However, the coronavirus (COVID-19) pandemic forced the cancellation of Comiket 98 and the delay of the Summer Olympics to 2021.

An online “Air Comiket” was live-streamed from May 2 to 5. Doujinshi creators sold manga through websites. We can only guess as to when, where, or how Comiket 99 will be held.

Tokyo Big Sight Station is closer to the convention center than Kokusai-tenjijo Station. But the Rinkai Line may be a better option for some, because of run-through (no transfer) train connections from as far away as Kawagoe, Saitama.  Aomi Exhibition Hall is closer to Tokyo Teleport Station on the Rinkai Line.

As Seen in Anime 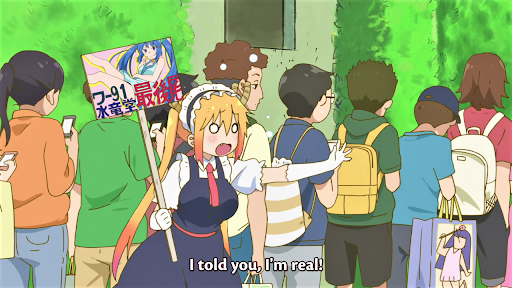 Comiket has featured or cameoed in a few anime and manga series. Not only is the event easy to poke fun at, but the pyramidal location is easily recognizable.

Konata, Kagami, and Tsukasa attended Comiket 71 in one episode of Lucky Star.

Konata is the seasoned convention expert, giving orders like a field general. Kagami has been there before but is willing to put up with Konata’s nonsense. Poor, innocent Tsukasa is completely lost, and just about drowns in the crowd.

Genshiken features a generic version of Comiket called “Comifes.”  They attend the convention as a club activity in the third episode.

Tohru and Miss Kobayashi attend Comiket in episode 7 of Miss Kobayashi’s Dragon Maid.   Fafnir is selling his own manga at the convention.  Tohru is mistaken for a dragon maid cosplayer.

Jyushimatsu tries to sell a baseball-themed doujinshi at Comiket in an episode of Osomatsu-san.  Choromatsu is not impressed.

Comiket’s official website is available in English here, or in Japanese here.