The Mythical Shooting World of Parodius 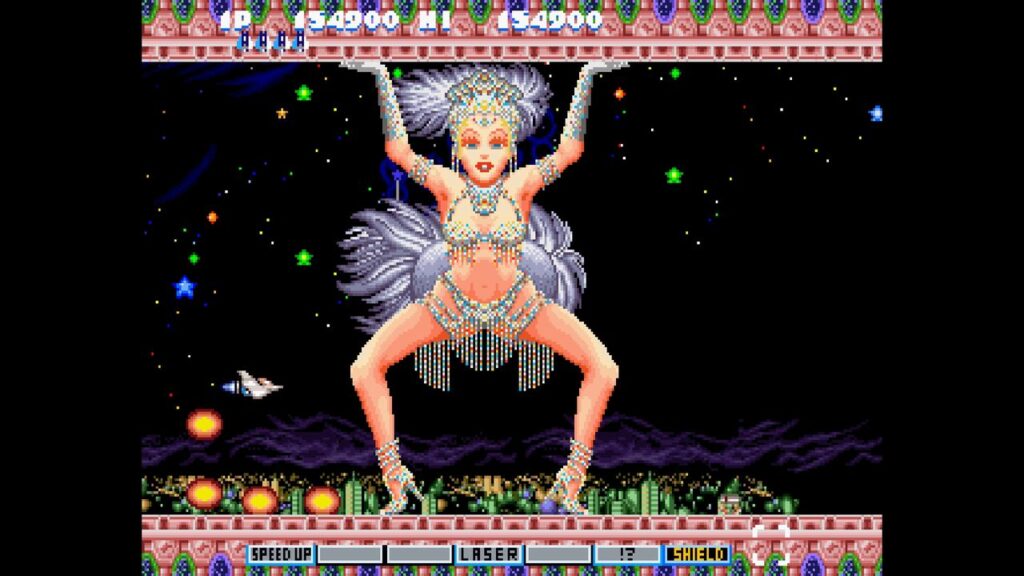 With its main character an octopus this odd game, Originally debuted in 1988, Parodius is a horizontally scrolling formatted game developed by Konami. The name is a combination of  Gradius (the game series) and parody. It also parodies many other Konami franchises and games, including Antarctic Adventure, Taisen Puzzle-Dama, Castlevania, Thunder Cross, Ganbare Goemon, Xexex, Lethal Enforcers, Tokimeki Memorial and TwinBee. In the Parodius world there is a series of six games and three pachinko slot versions that were released between the years 1998 and 2010.

In this original release, “The Octopus Saves the World,” and the format is a parody of the space themed game Gradius. With inspiration from Japanese folklore, this game operates as a horizontal shooting game. The player can play as either Tako (father of Takosuke), an octopus, the Penguin (father of Pentarou) from Antarctic Adventure and the exclusive MSX game Penguin Adventure, Goemon from the Ganbare Goemon series, the Popolon knight from the MSX game Knightmare or the Vic Viperspaceship from Gradius. This overlap makes it dynamic and fun!

The game consists of six stages and its common enemies are bees and penguins. There is a basic power level bar and a roulette option to gain more power ups.

It was also released as a mobile phone version in 2006.

“It’s Parodius! ~From Myth to Laughter” is a traditional fun classic shoot em’ up arcade game. The graphics and music are strange but eclectic and work for it. This narrative follows the octopus once again and this time people are disillusioned and sucked into gaming and our octopus discovers news about his long lost father.

This game has new weapon integrations such as missiles and lasers.

This version also incorporates bell power ups which can wipe out the entire screen of enemies and scantily clad anime girls.

“Fantastic Parodius! ~Pursue the Glory of the Past~”

This version has the same structure as the previous two releases, but now in two player mode there is the option to have different character selection for each player. Also in two player mode when you shoot long enough at a player it will cause the other character to lose control and shoot uncontrollably everywhere. Gameplay also will vary between auto, semi auto and manual.

This game version of parody shooter intentionally uses game show host samples for an added comic and humourful element. These voiceovers provide information about how well the player is doing and what enemies they are fighting. Also, the music has a strange but unique range of music ranging from 70s disco to remixes of bach!

It was first released for the Super Famicom in 1995 and then ported and updated for the PlayStation and Sega Saturn.The plot centers around 11 friends as they navigate a universe war and have adventures across space! Additionally the added characters have new and unique weapons to choose from.

In this version, in addition to avoiding getting shot, players are tasked with new missions to complete in order to get to the next level. Such missions could include destroying an enemy, obtaining a certain object or collecting a certain amount of coins.

In the game Old Lecher Tako A (Takosuke) opens an agency and hires Pentarou as his secretary. He recruited “workers” (the playable characters, who had gone their separate ways prior to Sexy Parodius) that would solve the problems of each client. Also a new funny element is that each character has their own announcer, that announces the name of their weapon as they activate it!

Here the game has evolved beyond to be more dynamic and based as a strategy game. Now, the object is to utilize the army of Parodius characters to battle in various places. In this plot, the second Parodius war ended 50 years ago and three military organizations were formed:  “The Alliance Penta”, “Organization Koitsu and Aitsu” and “Alliance Araji” in order to maintain peace. Interference has thrown the balance off and now the players must win the third great war to bring back balance and peace.

Join the intergalactic battle of winding and turbulent fun with a crazy range of characters from Octopi to fish to sexy anime girls to cats this is a wild and weird old school video game with a great lineage of stories, battles and adventures to choose from!