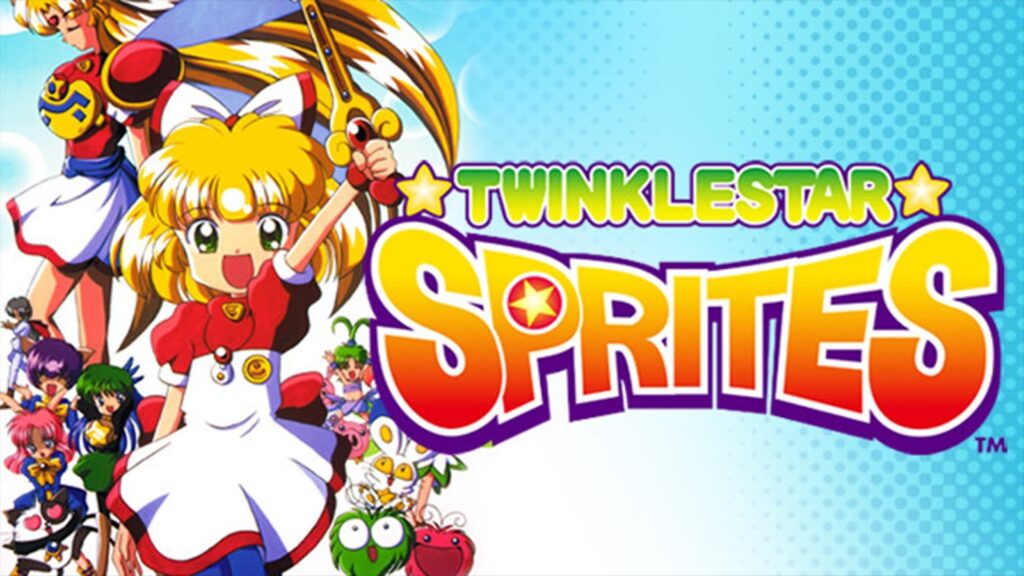 When I think of Shoot ‘em ups (SHUMPS), I usually think of piloting some sort of spaceship or aircraft. If I’m thinking of memorable games of the genre, I’ll immediately go to its beginnings such as Space Invaders or specific standouts such as Ikaruga or Radiant Silvergun. If I were to think of the most unique games, I’ll always point to the famous Neo Geo title Twinkle Star Sprites.

Twinkle Star Sprites presents the genre in a new manner. You might assume it’s the cute character design, but that right was taken ten years prior by Konami’s Twinbee, which is considered to be the inspiration for “cute ‘em ups”. Twinkle Star Sprites does manage to present itself in a unique way regardless with its magical girl aesthetic and unique gameplay.

The singleplayer has a bit to offer. You can go through and play against the CPU, either in the story mode or the character free mode. The story is simple: an evil mastermind has stolen the titular Twinkle Star which is said to grant any wish. Load Ran, who can transform into the magical “Sprites” with the power of the Twinkle Star, sets out to retrieve it.

You’re allowed to mess around with the other characters in the game through the character free mode, as well as see their own personal endings if they were to get the Twinkle Star for themselves. In a way, it reminds me of fighting games and each character’s (typically non-canon) endings. Each has their own speed, power, and character-specific extra attacks and boss attacks. 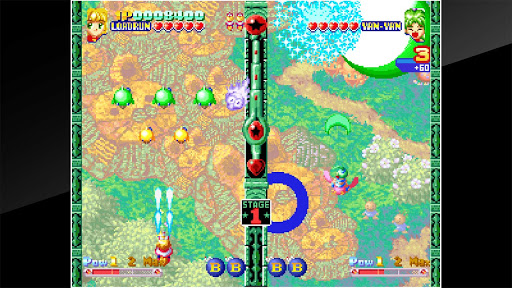 Now there’s nothing wrong with playing the game by yourself. But there’s a good chance you’re not going to want to play this for the story, nor the single-player. Where this game excels is with how well its gameplay translates to multiplayer, which makes sense considering it was decided from the beginning that it would be designed as a “vs. shooting” game

The game is perhaps best described as part shoot ‘em up/cute ‘em up, part competitive shooter, and part puzzle. The reason for this is because the game isn’t necessarily played by shooting everything on the screen. It’s definitely part of the process, but it’s not as if you’re trying to defeat a certain number of them or before a particular time limit.

Each stage is split into two sides, with a vertical bar separating your side and your opponent’s. Neither of you can cross the bar and are constrained to your half of the screen. Enemies will appear on both sides, but destroying them isn’t the endgame. If a player manages to destroy them in chain explosions, they’ll be sent over to their opponent’s side as fireballs (also called Normal Attacks).

You might already see where this is going. On top of the enemies already on each player’s side, both can add even more projectiles for them to dodge or attack. If a player decides to attack these fireballs, however, they’ll be sent back to the other side as Reverse Attacks.

One of two things can happen if the players manage to damage the projectiles of the Reverse Attacks enough to be sent back. The first is that they’ll send invincible character-specific Extra Attacks to their opponent’s side. The second is that if enough Reverse Attacks are destroyed in a combo, they’ll be sent back to form a Boss Attack! The bosses can be destroyed, but it might take you a while. 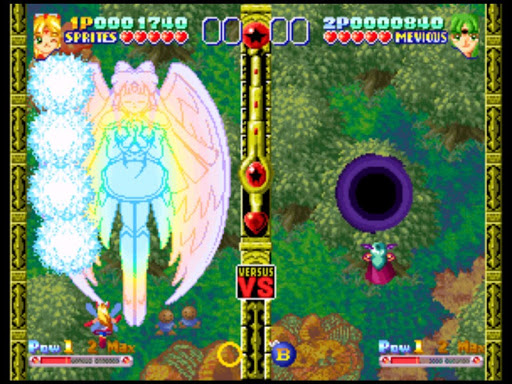 If you assumed that’s as deep as the game gets, you’d be wrong. Each player has a three-level power gauge that increases with each enemy they destroy. This gauge can be used to fire a power shot/charge shot to destroy more enemies. Depending on the level of the power gauge your charge shots can additionally send over Extra Attacks or even a Boss Attack.

There’s an option in case things become a little too hectic as well. Each player starts off with two bombs that they can use to wipe a screen. They also leave you briefly invincible, so there isn’t just one use for them.

As chaotic as this already sounds, it may seem like there’s no need for anything else to worry about because a long intense volley is sure to catch most off guard. The game developers seemingly didn’t feel the same way. In order to add another element while also making sure things don’t last too long, it’s possible for a Death enemy to appear if the game lasts too long or if one player doesn’t shoot for 30 seconds (dodging all game is not a strategy).

It only needs to touch you once and you lose the game, and each time he’s killed he comes back faster and with more life.

From the Neo Geo, to the SEGA Saturn, to Modern Consoles

While the game would enjoy success in the arcade game scene, it would also find success and multiple ports to home consoles. It would release on the Neo Geo CD and AES, as well as on the SEGA Saturn. This would become the release most known thanks to adding more voice acting, an extra character, and an animated intro.

It was also ported to the Dreamcast, and included as a bonus on the Playstation 2 through the series’ platform-exclusive and Japan-only released sequel, Twinkle Star Sprites: La Petite Princesse. It’s since been added to modern platforms including the PlayStation 4, Xbox One, Nintendo Switch, and PC. Most recently it was also added as a game available to (appropriately) play on the Neo Geo Mini.

What to take away from here is that if you have a recent console, you likely have access to this game. There really hasn’t been anything else like it since besides its sequel which has never been ported to another system. If you like to be competitive with your friends and you enjoy SHUMPS, the magical girl aesthetic or really anything cute, and your screen filled with bright sprites, this is a game you need to try.