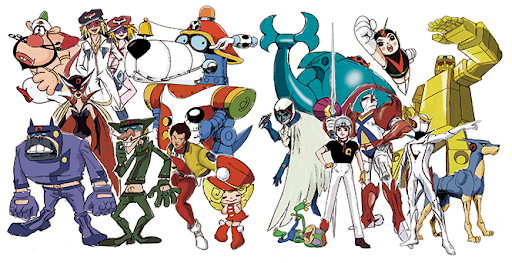 And Ippei Kuri.  The studio’s name has a double meaning in Japanese: “Tatsu’s child” and  “sea dragon“, the inspiration for their seahorse logo. The studio’s first production was an animated tv series called Space Ace which was released in 1965. Known for their whimsical and didactic approach, they created fun and lasting entertainment for decades.

This show is based off of the Japanese science fiction manga series, Space Ace, written and illustrated by Tatsuo Yoshida.

Over 52 episodes we are taken on a journey following a young alien boy named space ace. Other characters include  Dr. Tatsunoko, who is almost a father figure to Ace, and his daughter Asari, Ace’s love interest. The black and white animation style is classic and detailed, I am almost reminded of the Jetsons cartoon show. Both parts are playful and impeccable, this is an incredible example of early animation.

This show was directed by Ippei Kuri and actually came first and then inspired two manga renditions after the series. With a total of 26 episodes, the show follows Sanshiro (voiced by Ikuo Nishikawa) who is a teenage martial artist who trains with Kurenai School of Jiujitsu. He is in the search for his father’s killer with his only clue being a glass key left at the scene of the crime. The opening sequence is impressive with colorful fight sketches with bold colors.

The characters are westernized and there is an evident flare for the time with a lot of use of red. The stylization is impressive where we really get a textured look into the dynamic of early storyboarding and the animation process of movement, especially here in this fighting series.

This science fiction action anime series aired for 26 episodes and was directed by Hiroshi Sasagawa and Hisayuki Toriumi. Earth is it’s 21st century and is in peril, scientists research and look for a new planet that humanity can call home.

The “Waldrians” are a group of aliens that cause peril to the research and planning and it is up to the test pilots George Minami and Hiromi Amachi, along with Andro Umeda and Mutan, two alien beings from the planet Sanno, to battle and find a new home for humanity.

The Colors are bright and electric and characters are clad in futuristic gear that resembles something from the power rangers. The space setting and interludes of action in this animation style are a true testament to the craft of the early days of this animation.

This 31 episode science fiction anime series was directed by Mizuho Nishikubo in 1987. The show takes place on the planet Maris in the year 2387. The current civilization goes by the name of Nohzas and is ruled by Empress Admis, who implements a genocide to kill alll humans and began laying eggs to take over the planet.

Three teen soldiers are tasked with fighting back against this deadly mission. The animation has environments of rocks, dirt bikes, action, explosions and a rad 80s soundtrack. The graphics are more pronounced with added line and shadow detailing on the environment and facial expressions, making it visually look more dynamic and real. 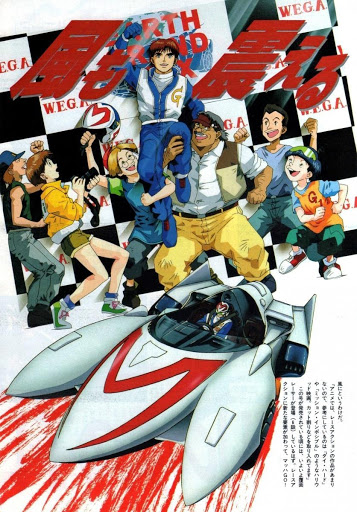 This is a remake of the original speed racer show from 1967 and in this series directed by Hiroshi Sasagawa (chief), Hiroyuki Fukushima (1-21) and Tsuneo Tominaga (22-34) a different fate is explored.

Rex Racer does not run away, but is presumed dead after an accident while testing out the Mach 5. His younger brother, Speed, follows in his footsteps and starts racing. The animation has elevated to a new level, with a more diverse range of hues and line quality. The mechanical detailing of the cars to motifs on shirts or hair add more visual array that was a pivotal shift in animation in the 90s. I love the added effects of speed that utilize here.

This was a film inspired by the 1985 Robotech television series and was directed by Tommy Yune, Dong-Wook Lee and Yeun-Sook Seo. The movie takes off from the final 85th episode, revolving around the Robotech Expeditionary Force (REF)’s final battle with the Invid on Earth.

An old enemy of the Invid is making its presence known, and is determined to wipe out all of humanity. The production and animation is immensely impressive and really showcases the growth and stylistic development of Tatsunoko since the 1960s. In this film, they use 2D animation and cel-shaded CG mecha animation.

Tatsunoko’s legacy has shaped decades of animated tv and films for generations to come to enjoy. With an emphasis on science fiction, their creativity cultivated a mystical and adventurous journey in all narratives. Their lasting impact showcases their creative pulsepoint and their expansive visual decadence and talent. They fluidly adapted and created through a vast amount of animation methodologies that truly mesmerize while watching.