The Prestigious Prep World of ‘Boys Over Flowers’ 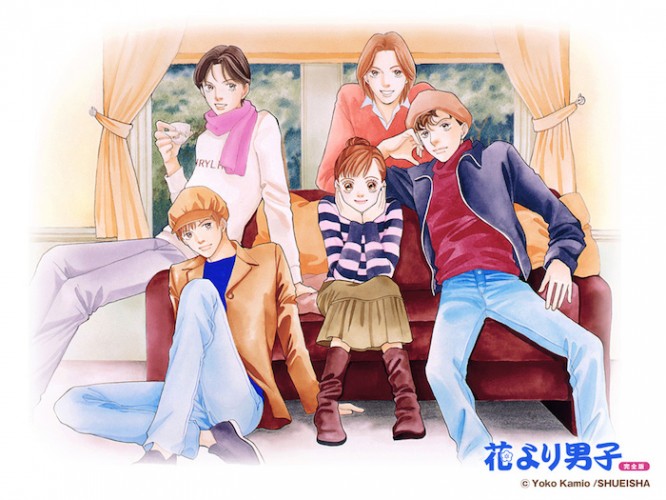 Th Boys Over Flowers anime is based on the series written and illustrated by Yoko Kamio. The anime series was released in 1996-1997 and was directed by Shigeyasu Yamauchi and written by Yumi Kageyama and consisted of 51 episodes. There were several live action adaptations of the anime into drama tv shows in Taiwan, Korea and then Japan as well as two live-action films titled Hana Yori Dango (1995) and the other, Hana Yori Dango Final (2008).

The storyline follows Eitoku Academy in Yamanote,which is a very elite school for the children of the most wealthy families. Tsukushi Makino comes from a middle class family and is mocked and called a ‘weed’ amongst the other students. The popular student group is called F4 for ‘Flower Four’ and they are a group of some of the sons of Japan’s wealthiest families.

One boy, Tsukasa Domyouji begins to like Tsukushi because she is the only girl at Eitoku who doesn’t give him attention and actually beats him up. She doesn’t like how arrogant and angry he is and how he often acts as a bully. She falls for one of his best friends, Rui Hanazawa and this is the beginning of the love triangle that shapes the entire series.

The other members of this popular group include Akira Mimasaka, who is a peaceful mediator between tensions and Sojirou Nishikado who is a notorious playboy. Both can usually be found with girlfriends and Akira has a thing for older women. Sojirou is more casual with love although it is revealed that he has been in love before.

Throughout the show, Tsukushi develops deeper feelings for Tsukasa and she notices how he is changing. But their love and relationship is not honored by his mother because of class differences but his sister is supportive. 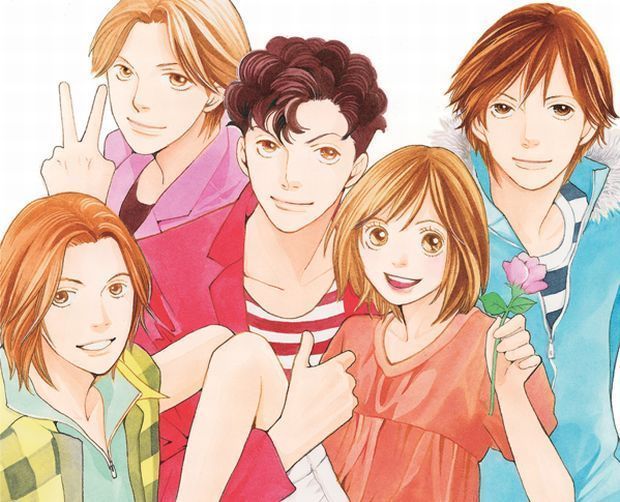 Our noteworthy protagonist is the teenage girl whose name translates to ‘weed.’ She is a weed to the popular flower boy group and challenges certain social norms as she is the only student who is not from wealth. She is unhappy at the school but tries to remain invisible. However, she finds herself in conflict with the F4 group and receives a declaration of ‘social war.’ The events that follow officially mark her as the subject of torment by all of them. She has an edge though and retaliates by attacking Tsukasa. This is the initial shock and encounter that causes Tsukasa to fall in love with her. Slowly she reciprocates his feelings and befriends and mends her ties with the popular F4 group.

Thr F4 group’s stubborn leader and heir to his father’s large and successful company. The members of his group are childhood friends. He has a tremendous amount of family pressure especially to honor and preserve his family’s name and reputation. He has a great deal of anger and volatility towards the entire school. He uses a red card to declare a social war against the person he gives it to. Basically the entire school has free rein to bully and humiliate the receiver of said red card. Watching Tsukushi go against him made him particularly upset but admires her strong will and eventually is one of the factors that makes him fall in love with her.

Rui is Tsukasa;s best friend and actually the boy Tsukushi first has a crush on that starts their love triangle. He is a more quiet individual and it is thought that he could be autistic. He is not very open but shares a love for Shizuka Todou, who is a model he has adored since he was a kid. He respects Tsukushi and her bravery for facing the F4 group. He wavers with his feelings for Tsukushi but backs away when he sees she actually does love Tsukasa.

Sojirou is a player who gets many girls. However, he has other hobbies like mastering Japanese tea ceremonies. He is definitely one of the group’s main peacekeepers.

Akira is probably the sweetest member of F4 with also the most maturity. His family has underground businesses. He is calm but has the ability to channel his rage. He likes to date older women because his mother is very childish.

Yuuki Matsuoka
Yuuki is Tsukushi’s friend from childhood and they work together after school at a Dango shop. They both look out for one another. Yukki cares a lot about Tsukushi’s feelings, and does not want anybody to hurt Tsukushi. Yuuki offers Tsukushi a lot of encouragement and advice about her situation with the F4.

Shizuka is a rich model and has been friends with Rui since they were kids. She was able to help him come out of his shell and they were best friends growing up. She is a model but she decides to change paths and moves to Paris to become a human rights lawyer. Rui actually joins her in Paris but they don’t do well as she is working so much. Although their relationship doesn’t last, they are able to maintain their friendship.

Kazuya is another childhood friend of Tsukushi. He is able to enroll at the school after his family acquires some money, which soon comes to be noted as the distinguishing differences between ‘old money’ and ‘new money.’ The F4 highlights this difference often and try to make him feel inferior. Although he doesn’t let it get to him.

Makiko is Tsukushi’s first friend at Eitoku. He saves her from torment and unrest at school, although she prefers to not be friends so she isn’t a target anymore. But he continues to send her private notes and encouragement.

Sakurako likes Tsukasa but he makes fun of her looks and traumatizes her. Later on she moves to Germany and has plastic surgery to combat her insecurities on her physical appearance. Upon returning, no one recognizes her and she plots revenge on F4 who have hurt and humiliated her, with help from Tsukushi.

Junpei is Tsukushi’s junior and protects her from bullying upon her trip to Canada. He appears like a naive nerd, but we later learn he is a famous model who hides his identity this way. Tsukushi relates to him a lot but doesn’t realize he is using her ss bait to lure Tsukasa to him and his friend who are looking for revenge for his older brother’s injury and years of humiliation.

Shigeru is involved in the Okawahara Corporation and is approached by Tsukasa’s mother for an arranged marriage. He doesn’t want to marry her although she falls in love with her.

Tsubaki is Tsukasa’s older sister and they are very close friends. Although they sometimes fight they trust each other and she raised him when they had no parents. Her mother forces her to leave her first boyfriend because he was working class and hse wanted him to marry a rich man. She is homesick often and tries to do her best to help Tsukasa and Tsukushi with their relationship.

Kaede is Tsukasa’s mother and is also an important chairwoman for Domyouji Enterprises. Her reputation and business acumen has many people fear her and she doesn’t want her son to be with Tsukushi and tries to break them up. She tries bribing her 50 million to not see Tsukasa again but she refuses. However, despite mendling and trying to make him marry Shigeru, she eventually comes to accept their relationship and eventual marriage,

Overall, this show is strong and an interesting drama with the love triangle of the first half. The anime is good and then you can see the major plot points in the Japanese, Korean, Taiwanese TV versions. However, only half of the manga is covered in the anime, which affects character development and the overarching relationships. This series is a fun and shoujo classic that all anime fans should give a watch to!