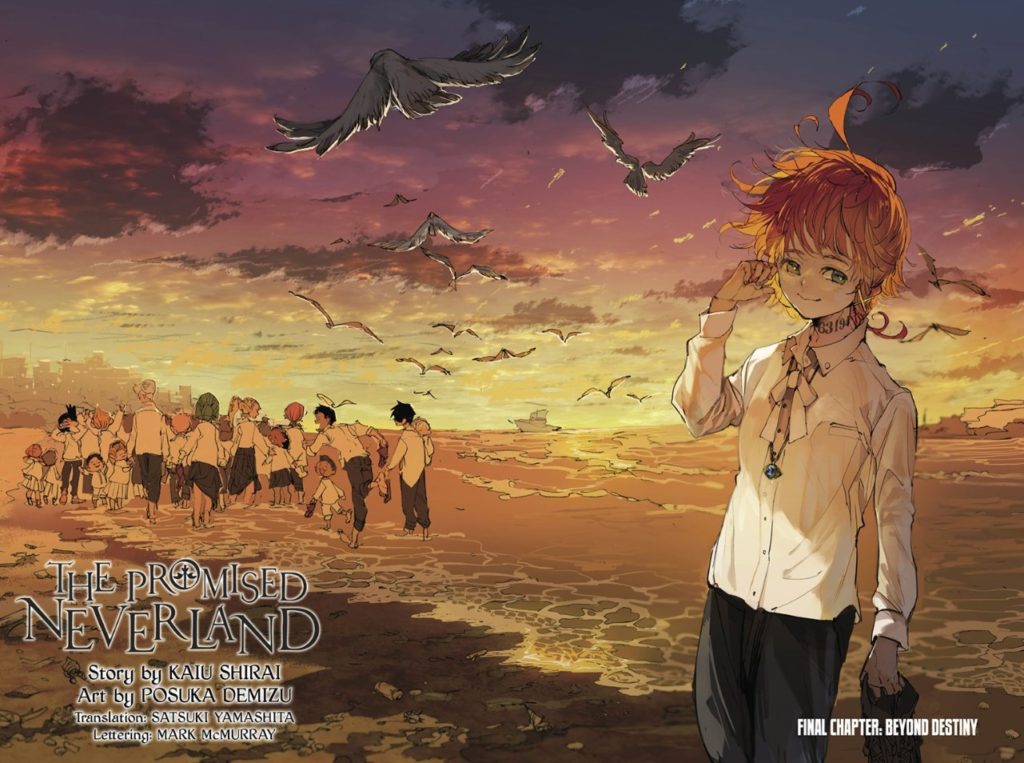 Kaiu Shirai and Posuka Demizu’s The Promised Neverland has come to an end in Weekly Shonen Jump. After 181 chapters, 20 collected volumes, one anime series and four years of serialization, the story of Emma, Norman, and the children of Grace Field has awed and inspired millions of fans all across the world. But The Promised Neverland’s ending has not been greeted with universal acclaim – in reality, a sign of the series’ slow decline over many years.

Contains spoilers for the entirety of The Promised Neverland.

There will no doubt be some out there who enjoyed The Promised Neverland, and it’s ending, and love the series with all their hearts. To those people, we say this: great! Love what you love, and don’t let anyone tell you otherwise. Changing your opinion just because someone disagreed with you is the worst form of peer pressure, and that isn’t something that we want to encourage.

Even so, there are several problems with The Promised Neverland and its ending that are worth highlighting – especially as the higher-ups over at Shueisha no doubt look to repeat its success. Perhaps the main problem stems from the simple fact that the series was so good at the beginning: instead of bowing to industry pressure and conforming to the usual battle manga formula, it stuck to its guns and delivered a mystery-thriller story with just a hint of horror that made it stood out among the crowded shonen landscape. This was what garnered a lot of attention for the series upon its debut, but was also bound to make all subsequent arcs look bad in comparison.

Nevertheless, The Promised Neverland’s gradual decline was not an inevitability. Nothing ever is. We can point to several key moments during the story’s progression that were instrumental in bringing about that disappointing ending, starting with the issue of Norman’s redemption. This was always bound to happen given the series’ young demographic, but the fact that the character simply returned to normal following the climax of the ‘Imperial Capital Battle’ arc always struck me as anti-climactic. Instead of dealing with the implications of the character’s previous turn towards villainy, the story simply preferred to discard them outright.

Another mistake was to focus too much on the demon characters and leave the human characters out of the picture for far too long. Again, this was always bound to happen as the story naturally tended towards answering some of the audience’s most burning questions – how does this world function? How did it come to be? – but there was definitely too much of an emphasis on court intrigue and inter-clan politics in the run up to and during the Imperial Capital Battle arc.

We should say for posterity that not everything following the series’ bombastic beginning was flawed. Indeed, the ‘Search for Minerva’ arc was just as wonderfully fraught with tension and discovery as the initial, ‘Jailbreak’ one, and the ‘Goldy Pond’ arc was a magnificent evolution of the series’ initial conflict. But it is hard to describe the series as a success when only some of its arcs were worthwhile.

Here, we return to The Promised Neverland’s ending proper. Nailing the ending is perhaps the most important part of any story: without a proper, fulfilling ending, everything that came before it can seem a tad pointless. In this sense, although the series’ prior failures are important, the arcs leading directly to the series’ ending are worth focusing on. 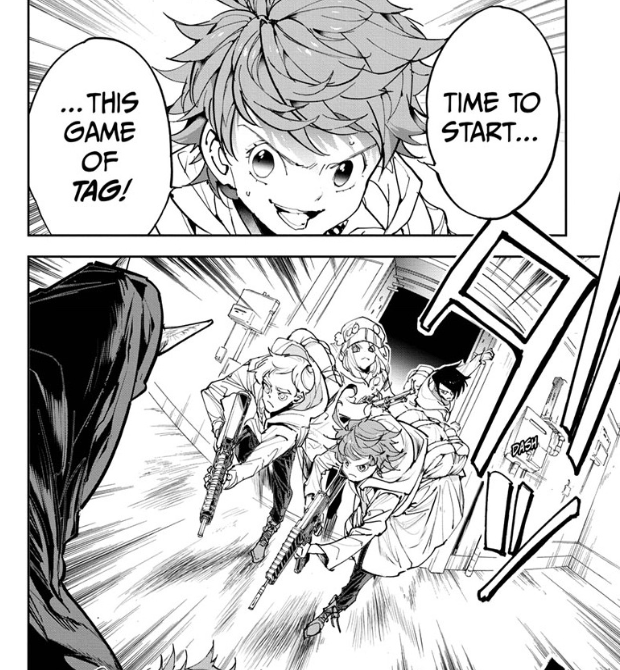 The ‘Return to Grace Field’ arc should have, by all accounts, been the series’ victory lap. Not only was it the final confrontation between the kids and the demons, it was also a return to the series’ place of origin in the form of Grace Field House. But if you were also expecting a return to form, you would be sorely disappointed.

The problem started when it became clear that Peter Ratri, after many chapters of build-up and interference, was not quite as threatening as he might have once appeared. Instead of acting like a sinister mastermind, he came across as a snivelling crybaby who fled at the first sign of danger. Emma was also able to defeat him with incredible ease, as he simply killed himself once it became clear that he could no longer win.

By far the biggest problem, however, came in chapter 178. If it wasn’t already obvious enough that The Promised Neverland was shaping up for a disappointing ending, then this chapter made it crystal clear: as it turned out, Emma had to give nothing in exchange for a new ‘Promise’ with ‘Him,’ despite many chapters of build-up and tension surrounding this question. This was quite rightfully called a copout, and flabbergasted many fans upon its release. 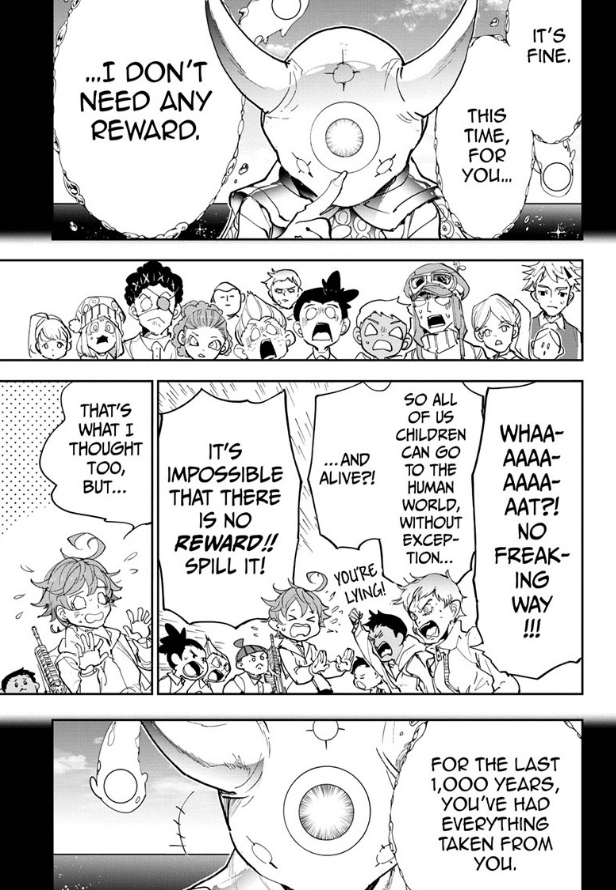 Although subsequent chapters walked this development back, the damage was already done. Even if Emma had been forced to sacrifice the memories of her family after all, this felt like more of a technicality than a planned development. The Promised Neverland’s final chapter, 181, then doubled down yet again by having Norman and co. meet Emma again in the human world. Certainly, the fact that she has lost her memories will mean that they will have to start from square one, but The Promised Neverland’s ending still essentially resets the status quo. Everyone is happy – the end.

The big problem with The Promised Neverland’s ending is that it is completely lacking in pathos and payoff. Not only did everyone get what they want, they managed to do so without sacrificing anything in the process (apart from characters like Yugo, of course). The series’ ending is also marked by chronic indecision and inconsistency: one minute Emma has to sacrifice nothing, but then she has to sacrifice everything. Whether or not this was a conscious reaction to fan backlash by author Shirai is unknown, but seems unlikely given that chapters are prepared several weeks in advance.

In any case, The Promised Neverland’s ending has left some fans bitterly disappointed. It also serves as an encapsulation of the series’ decline over the years, contained within several key problems as outlined above. On this basis, is it really fair to describe the series as one of Weekly Shonen Jump’s best? Is it really as good as Death Note, Medaka Box, or Assassination Classroom?

That last example is particularly salient as it shows us how to execute a good ending: stick to your guns and have your characters lose something in order to succeed. Even though this ending was obvious from the beginning, it worked because it had pathos and consistency.

Where does this leave Weekly Shonen Jump? Not only has it lost another one of its most popular series, it also provides several key lessons for the magazine. Namely: don’t let a series so focused on story and narrative decline in terms of story and narrative, but also that such series can succeed if they have the potential. The key challenge in breaking away from the battle manga formula, however, is maintaining a degree of quality and consistency.

In any case, although The Promised Neverland has now ended, this is far from the last we’ll see of Kaiu Shirai and Posuka Demizu’s series. Not only is the second season of the anime on the way, we’re also getting a live-action movie and TV series. There were also several exciting projects announced in this week’s issue of Weekly Shonen Jump, including a game with designs penned by series artist Demizu.

You can read The Promised Neverland and its ending for free via VIZ Media’s Shonen Jump service.