The Promised Neverland kicked off as a rather unassuming tale. Children live in a picturesque orphanage cared for by a woman who encapsulates everything you could ever want in a mother. But that image is quickly and cruelly shattered when three of the children discover the dark secret behind their existence. Their home is a farm, and their brothers and sisters are livestock to feed demons who rule the world. Adapted from a 2015 manga of the same name, The Promised Neverland season one follows the cat-and-mouse game of Emma, Norman, and Ray trying to escape from their prison, and the figure they once considered their mother trying to thwart them at every turn.

The Promised Neverland’s strength is in how carefully the story is crafted. The narrative is tight, cards are kept close to the chest, and audiences are only shown what the director wants them to see. This brings audiences into the same mindset of our main characters: one of paranoia. As you journey through the story, you’re never sure who to trust, and siblings, even young as five, can give cause for unsound suspicion. At the core of this is the tantalizing showdown between the trio and their ‘mother’, Isabella. In your heart you know that the children will be alright, but with each passing episode, you’re never quite sure. It seems that Isabella is always five steps ahead of them, and despite the children’s most skilled efforts, they’re up against insurmountable odds. 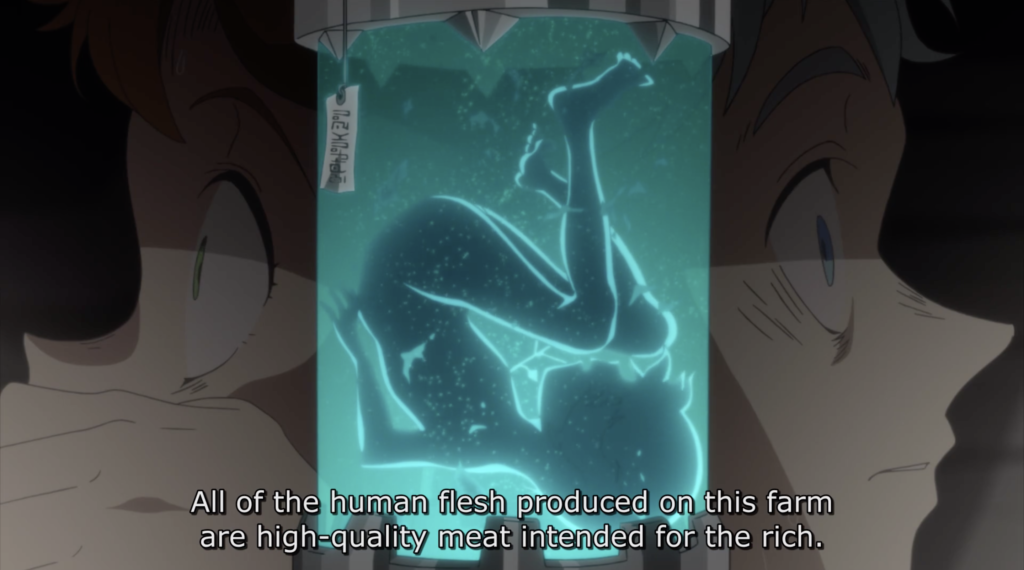 This sense of dread is potent throughout all the episodes of The Promised Neverland and threatens to overwhelm you if not for the series’ tenacious characters. Emma, Ray, and Norman are endearing characters, and they strive to do what’s best for their family. But their true charm is in their quick wits and flexibility. It’s a marvel to watch how they react when pushed into a corner. The other children aren’t left to the sideline: Gilda and Don developed into rather interesting supports, even though I yelled at my screen one or two times at Don. But all in all, I have to applaud the time taken to develop these characters.

However, I will say that the children do walk a fine line between being realistic and ‘superhero’. For example, Ray claims to have memories from the womb (lack of infantile amnesia) and the children seem to have physical capabilities that only an olympian could have! It’s difficult to suspend disbelief for these moments, and in fact they can completely ruin the tension of scenes. After all, the suspense comes from seeing these children work within their limited capabilities to escape; having these unbelievable abilities cheapens their effort. 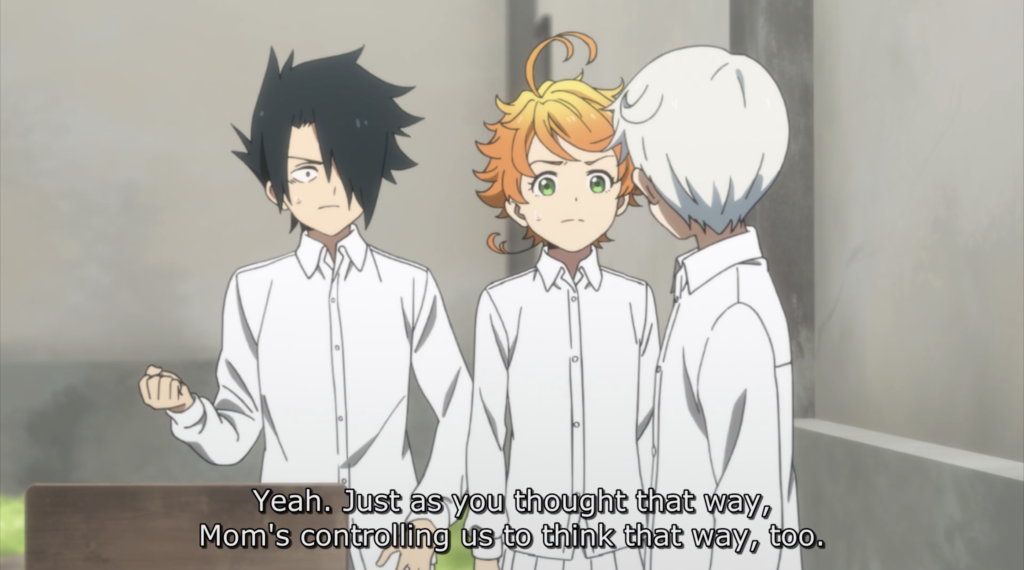 But as much as I loved the children in the series, the villains were just as interesting. Well, I say villains, but the tragedy of The Promised Neverland is that no one is truly ‘evil’. Everyone is just trying to survive the only way that they know how. Throughout the season, Isabella morphs into quite the sympathetic character. There are several parallels between her and Emma; they were both the smartest females in their group, doted on by their ‘Mother’ and also wished to escape their terrible fate. But for Isabella, she recognized what she was up against and decided there was no hope. Instead, she sees children off to their deaths, even acknowledging that she will have to do the same for her own son. Isabella isn’t cruel. In her own way she cared for the children under her, even giving them handmade toys, which she keeps as mementos. But she’s realistic and focused on her own self-preservation. Whether that’s selfish is up to you to decide. But I will say that she was a character I loved to see on screen. 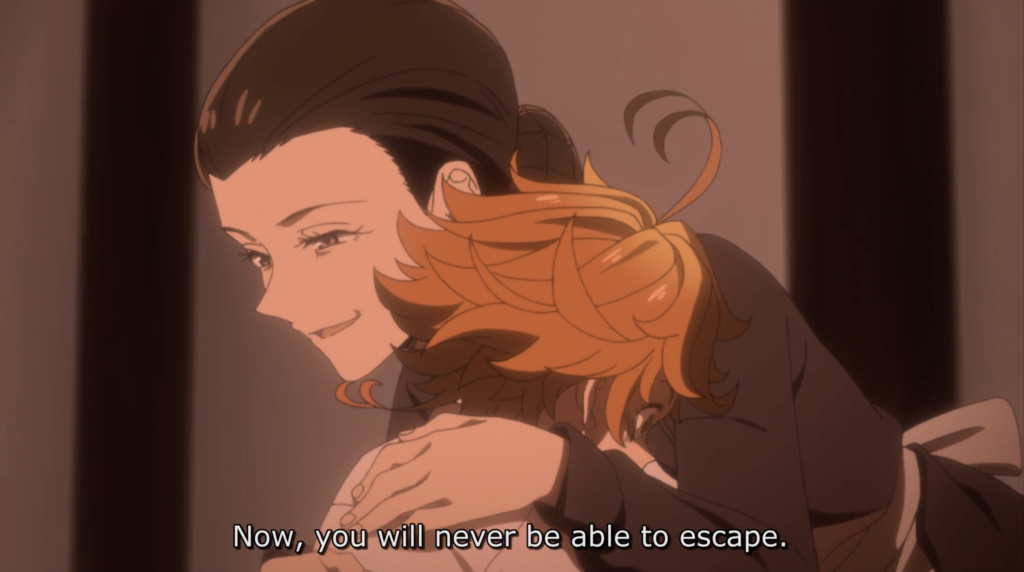 Watching the series, it’s not just the character or story that creates the world of The Promised Neverland; it’s also the animation and design. Compared the first episode, where the children play jovially under the bright sky and the house itself seems so warm and cozy, a majority of the later episodes are situated in low light. The characters scheme under the cover of darkness with only candles that cast harsh shadows on their faces. Dark corridors seem to stretch on and with only the glow of the light surrounding them, you never know who is hiding in the shadows. We can see the transformation of the house from a home to a cage. This only adds to the anxious anticipation that the season crafts in every one of its scenes.

My biggest complaint about the season is actually a small one. In the manga, the characters use a lot of internal monologue to talk through their plans and frustrations. But in the anime, this wasn’t handled as delicately. Instead, we have characters almost yelling at the top of their voice how they’ll escape or take over the farm. It’s shocking in all the wrong ways, and could definitely have been handled with a bit more finesse. 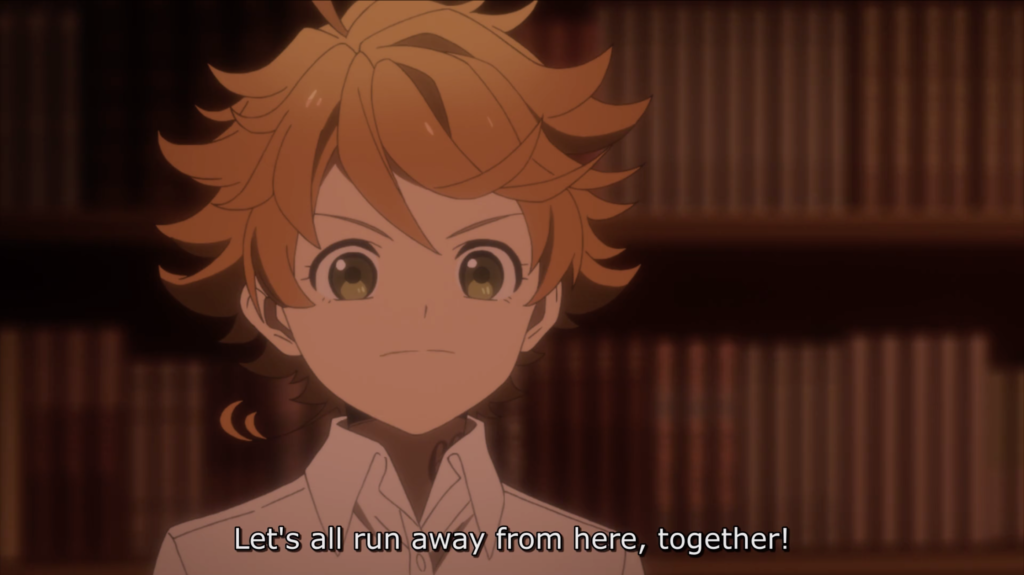 At its centre, The Promised Neverland is a story of family. These characters trust in one another, and together can overcome a system that literally wants to destroy them. But while it’s a family story, it’s not a heartwarming tale. The Promised Neverland brings us on an exhilarating ride of survival, sacrifice, and desperation. It’s a story that is enthralling to watch unfold and has you hooked right from the very beginning. With season two currently airing, I can’t wait to see where these children go to from here. But wherever they do go, it’s sure to be well worth the watch.

You can watch The Promised Neverland season 1 via Funimation.

other Daryl Harding 10 months ago