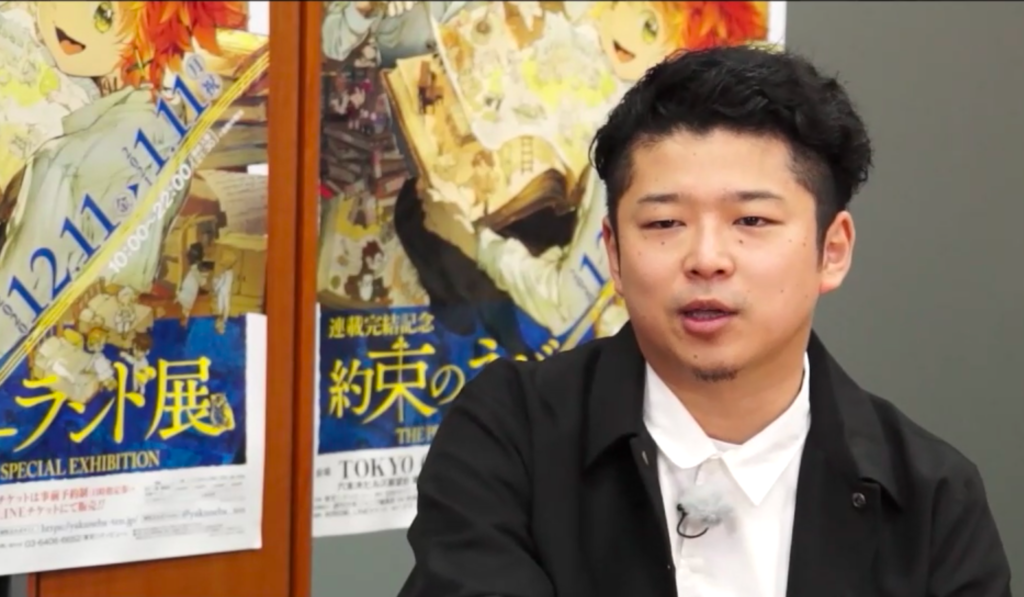 Despite ending back in June, The Promised Neverland hasn’t sunk into obscurity. Rather, the live-action movie just opened in Japan last week, the second season of the anime is set to start airing next month after a long wait, and those in Japan can check out a special exhibition in Roppongi right now that celebrates the series’ incredible art. Such was the occasion for this Promised Neverland interview.

To mark the grand opening of the exhibition, Yomiuri Shimbun recently sat down with The Promised Neverland and Weekly Shonen Jump editor Taku Sugita for an eight-part video interview explaining the birth, development, and production of the series. In doing so, he revealed many surprising things hitherto, such as the fact that the two authors barely talked to each other except through him. You can find a summary below.

The Story of The Promised Neverland Begins With Kaiu Shirai

In the first part of the interview, Sugita explained how The Promised Neverland first came to be through his first meeting with the series’ author, Kaiu Shirai. Before editing Neverland, Sugita looked after such authors as Mitsutoshi Shimabukuro on Toriko, Eiichiro Oda on One Piece, and now handles Shuhei Miyazaki on the gag manga Me & Roboco. He has quite a wealth of experience, which he used to its fullest while developing Neverland.

Usually, when authors bring in a manuscript for an editor at Shueisha to look at, they bring in some material equivalent to a long fifty- or sixty-page one-shot. Not Shirai. As revealed in the interview, his initial materials for The Promised Neverland totaled to about fifteen chapters, or the entirety of the Jailbreak arc. Such was the amount of material that he clutched in his arms that Sugita actually thought that he looked a bit suspicious at first!

This initial meeting took place in December 2013, but it took almost three years until The Promised Neverland began serialization in 2016. Why did it take so long? In the second part of the interview, Sugita explains that while Shirai was a fairly accomplished artist (he drew the one-shot by himself), he wasn’t nearly good enough that he felt he could keep up the same level of quality if The Promised Neverland was picked up for serialization.

Producing something on a weekly schedule is quite hard, and Sugita admits that story is often the first thing to drop in quality. That wouldn’t be good for Neverland, which always had a ‘delicate’ story, even from the beginning. Searching for a separate artist, therefore, seemed like the best option.

Searching for an Artist: The Fated Meeting With Posuka Demizu

Intensifying that decision even further was the fact that the initial Promised Neverland manuscript wasn’t even allowed to go to the serialization meeting by his particular Jump team leader for consideration, which shocked Sugita. Even though it was not a ‘typical’ Jump manga by any means (it didn’t have much action or many battles, instead being inspired by western TV and films) Sugita thought it would be carried by the strength of its story alone. Faced with this unfortunate situation, Shirai agreed to do something different and try to find a separate artist.

That didn’t go quite as easily as expected, however. In the third part of the interview, Sugita says that about nine artists were initially approached with doing the art for The Promised Neverland, but all of them eventually rejected the offer. Their reasons were diverse, but the main ones were that they either couldn’t see the series becoming a hit, or the story simply wasn’t a good fit for their art. The fact that this series was also being shopped around by a rookie author and a relatively inexperienced editor with no hits of his own didn’t help either, which is why the pair eventually decided to do some one-shots.

As explained in the interview, two one-shots preceded The Promised Neverland: Ashley Goeth no Yukue (Ashley Goeth’s Whereabouts) and Poppy no Negai (Poppy’s Wish). Both of them were published on Jump Plus, but Poppy, in particular, proved very popular, and Sugita muses that this was because of Posuka Demizu’s art.

Ashley Goeth was illustrated by Rickey based on a story by Kaiu Shirai, although it’s not stated in the interview why Demizu was ultimately picked for The Promised Neverland. Perhaps it’s something to do with Sugita’s love for the artist: in the fourth part of the interview, he explains that while he was always a fan of her illustrations on Pixiv, he never really thought that she could do manga, too. One day, however, he realized that she was already serialized in Coro Coro Comics and reached out via email, asking her to at least look at Shirai’s initial manuscript, not needing a reply straight away.

Straight away, the reply came: ‘Yes, I’d love to do it, and my serialization is about to wrap up, anyway.’ Yomiuri describes it as a ‘fated meeting,’ and we’d be hard pressed to disagree: Demizu’s past work as a sci-fi and fantasy illustrator made her perfectly suited to the story created by Shirai, and this synergy fed into the entire production of the series.

How The Promised Neverland Finally Got Serialized

In the fifth part of the interview, Sugita describes the process of taking The Promised Neverland back once more to the serialization meeting; it filled him with dread, as he’d been rejected out of hand once before. Nevertheless, he also had Shirai and Demizu spend the three months before this meeting working feverishly, making sure that all the pieces were in place. He was sure that they’d done everything right.

Alongside getting Demizu to redraw entirely Shirai’s original manuscript, Sugita also took some inspiration from My Hero Academia’s Kohei Horikoshi in getting Shirai to put together a bunch of additional material on the world and its characters. This is because when My Hero Academia was apparently first being considered for serialization, Horikoshi had already prepared a folder full of future character designs, and Sugita thought this might be helpful for Neverland in the long-term. Inspiration really does come from the strangest of places.

Unfortunately for Sugita, the serialization meeting for which The Promised Neverland was submitted was particularly hotly contested. There were apparently a lot of other distinguished authors also being considered, and the magazine had room for two or three more series. What surprised Sugita was the fact that it passed without almost any objections. 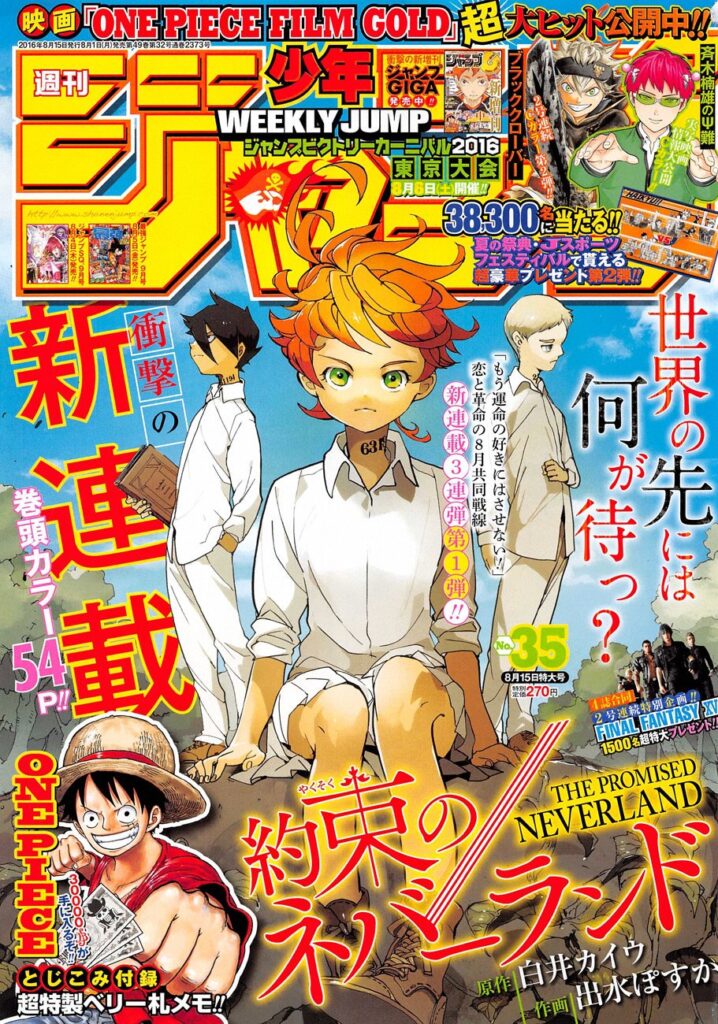 The Promised Neverland had finally been confirmed for serialization almost three years after Sugita had first met Shirai, but several problems still remained: the title, for one, wasn’t nearly catchy enough in its original form Kono Sekai de Watashi tachi Ikinokoru Houhou (How We Survive in This World). Using some wisdom gained from Eiichiro Oda and the marketing department, Sugita and Shirai settled on the much snappier Yakusoku no Neverland (The Promised Neverland), settling on the word ‘yakusoku’ as it sounded ‘kind.’

Working as a duo also had its fair share of potential problems, as the artist doesn’t always share the same vision as the writer. They also rely on each other for motivation, and many duos eventually split apart because of differing circumstances. Nevertheless, Kaiu Shirai and Posuka Demizu never had any of these problems: Sugita says in the sixth part of the interview that the production of The Promised Neverland proceeded rather easily, despite keeping duos together being ‘one of the hardest things’ for him as an editor.

The Secret Behind The Promised Neverland’s Success

According to Sugita, the secret behind The Promised Neverland’s idyllic production was a combination of mutual respect and hard work. Both creators respected each other’s work immensely and would often compliment each other on the quality of their writing or artwork. How they did it, though, leads into perhaps one of the most surprising things about The Promised Neverland revealed during the interview: the fact that Shirai and Demizu hardly ever had any direct contact.

From the beginning, Sugita thought it best if the two creators avoided any direct contact as there might be a ‘clash of feelings.’ Perhaps this is something he experienced in the past. In any case, they had a ‘rule’ that all communication had to pass through Sugita, with the editor relaying each creator’s thoughts indirectly to one another. This meant that he experienced firsthand Shirai’s gushing appreciation for Demizu’s art, as well as Demizu’s surprise at particularly dramatic turns or reveals in the story.

When asked to describe the two creators of The Promised Neverland in the seventh part of the interview, Sugita says that Shirai was ‘earnest’ and ‘hard-working’ while Demizu was both a ‘genius’ and an ‘angel’ during the series’ time in Weekly Shonen Jump. This is because Shirai was always asking for his honest opinions on his story ideas, attempting to outdo himself as a ‘normal person’ who once worked a normal job. He was mostly calm, but occasionally ‘dark Shirai’ would come out when he was pondering a particularly difficult plot point.

Demizu, on the other hand, was an incredibly quick worker who always met her deadlines and inserted an incredible amount of detail into every facet of the series. While she was waiting for Shirai’s storyboards, which were sometimes late, she would often draw lavish color illustrations that would be printed later in the magazine. This might explain why there were so many towards the end.

What’s more, even when Shirai was late and would occasionally make ‘impossible requests’ of the artist, she would always smile and try her best. Sugita reckons that she is the reason why The Promised Neverland got so successful, as so many people were enchanted by her art. Although he says that she might get angry at him for calling her an ‘angel,’ she truly was the missing ingredient that brought Shirai’s story the attention it deserved.

The Future of The Promised Neverland, According to Taku Sugita

If possible, however, Sugita would like it if Shirai and Demizu could team up together again to create a new series. The editor recognizes that both of them have their own lives, and wants nothing for them but to be happy, but it truly is a tantalizing prospect.

You can read The Promised Neverland for free via VIZ Media’s Shonen Jump.