Ever since the Golden Age of Weekly Shonen Jump in the 1980s, an aura of mystery has surrounded the weekly magazine. How are such hits as Dragon Ball, One Piece and My Hero Academia churned out one after another with almost no signs of slowing down? Peeling back the curtain and uncovering the magazine’s secrets is something nearly all fans would like to do, and The Right Way to Make Jump! might offer a way to do just that.

Penned by Takeshi Sakurai and published via the Jump Plus online manga service from September 2014 to July 2015, The Right Way to Make Jump! offers an insight into the processes behind Weekly Shonen Jump in a very different way from other manga of its ilk. Not just content with discussing the series that makes it up, it also dives into its very fabrication and production, all the while telling a deeply personal story along the way. Plus, given that it is now available for free via VIZ Media’s Shonen Jump service, there’s never been a better time to check it out. Shall we?

Secrets of the Manga Industry

The Right Way to Make Jump! starts out with a very simple question: how is Jump made? This necessarily conditions a very different approach from other manga in the same genre – looking at the nitty-gritty of the production and publication processes rather than the creative processes behind the series themselves.

To illustrate this point, one of the best comparisons that can be made is with Tsugumi Ohba and Takeshi Obata’s Bakuman. That series, published between 2008 and 2012 in Weekly Shonen Jump itself, focuses much more on the creator’s side of the process, discussing the trials and tribulations that go into creating a series for the magazine rather than how the magazine itself is put together. So even if you feel like you have a fairly good understanding of the processes behind Jump from reading that series, The Right Way to Make Jump! is still worth checking out.

In any case, from the very beginning The Right Way to Make Jump! showcases an obsession with the nitty-gritty that makes its examination of the processes behind Weekly Shonen Jump absolutely fascinating. Ever wondered how Jump is assembled for printing? Well, as it turns out, manuscripts from the individual mangaka are scanned in by hand to create a resin plate that is then used for printing (chapter 3). Following on from this, in chapter 6 it showcases how the printed pages are bound into a single issue, along with what kind of paper is used and why in chapter 7. In fact, up until chapter 11, we get almost no insight into the creative process behind Jump, instead of being wholly focused on the production process itself.

As a result of this razor-sharp focus, a number of interesting secrets are uncovered. Firstly, in exploring the printing process, it is revealed that the printers input all dialogue, narration, and other written elements into the computer by hand, which is an extraordinary analog process that presents several problems – namely, the issue of reading handwriting. Apparently, Hideaki Sorachi of Gintama fame is particularly bad for this. 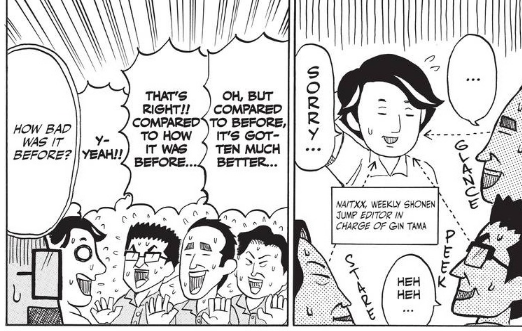 Furthermore, The Right Way to Make Jump! reveals the answer to an age-old question: why are the pages of Weekly Shonen Jump printed in different colors? Apparently, this is because the magazine is printed in different bunches of 32 and using different colors helps to tell them apart. The magazine is also made from recycled paper, and extracting all of the colors to make a pristine white sheet is apparently quite hard, so it’s much easier just to roll with the punches. Finally, the fact that the page color changes every so often apparently helps with concentration, which may be helpful given the magazine’s relatively young audience.

But, as I said, after chapter 11 The Right Way to Make Jump! does begin to talk a little bit more about the creative processes that lie behind Weekly Shonen Jump – more specifically, there is an interview with Kohei Horikoshi, author of My Hero Academia. This interview, spread out across chapters 24 and 25, reveals a select few of the highly successful author’s methods and even gives us a peek inside his studio – apparently, he has a lot of American superhero figures. No surprises there. 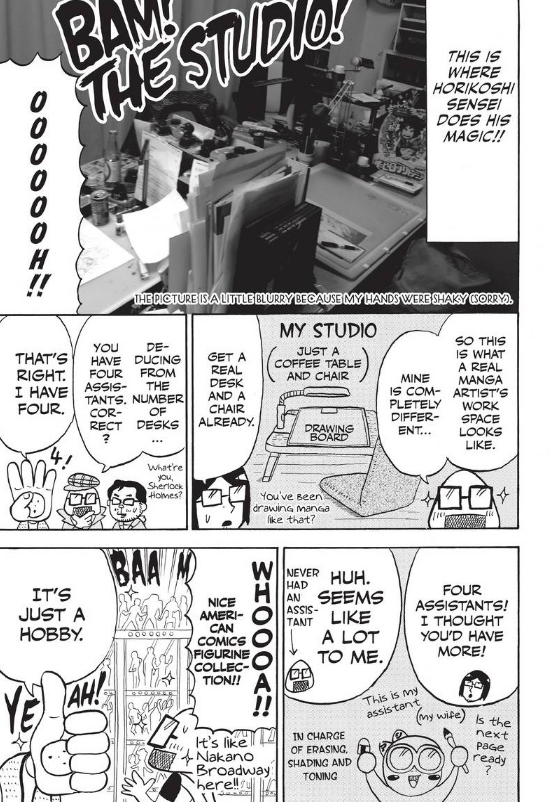 What’s even more fascinating than the Horikoshi interview, however, is the fact that the editorial team put in just as much work as the authors do to make the magazine as iconic as it is. In chapter 18, for example, it is revealed that It is the editors who come up with the basic design for issue covers and send it off to the mangaka, who fulfill the request with some minor changes. I consider Weekly Shonen Jump covers to be a work of art, so it is surprising to hear that the author has limited involvement in formulating them. The various logos for the series, too, are designed by a certain member of the editorial team (chapter 21) who has been doing the same job for a whopping 40 years. That’s a whole lot of iconic logos.

Takeshi Sakurai and the Magic of Jump

There are even more interesting things that deserve to be explored, but I wouldn’t want to spoil the entire manga for you. Some of those secrets, you will have to uncover for yourself.

Furthermore, The Right Way to Make Jump! isn’t just a manga about the processes behind Weekly Shonen Jump. It is also the personal story of one Takeshi Sakurai, both a character in the story and the creator of it. His sense of enthusiasm and childlike wonder is what pushes the story forward, from paper and printing to Japan and the USA and beyond. Without the character of Sakurai, it is safe to say that the series would not be as compelling as it is.

In general, these sorts of stories always require some sort of emotional throughline. Take, for example, the recently adapted Keep Your Hands Off Eizouken!, which educates the viewer on the finer points of animation while also delivering a satisfying character-driven narrative. Bakuman, too, enjoys much of its pedigree thanks to its combination of a compelling cast of characters and exploration of the manga industry. After all, if there are no characters to root for, what’s the point? You may as well watch a documentary.

Nevertheless, there is a sense of depth to Sakurai’s character that was probably unintentional. Sakurai abandoned his dreams of becoming a mangaka three years before the story starts, choosing instead to live a happy, married life with his wife while working at an onigiri shop. When he is called up by his editor MomiyaXX (censored presumably to protect the characters’ real-life identity), then, he is offered a second chance that taps directly into his passion – Weekly Shonen Jump. This also means that he’s not prepared to squander any of this opportunity, even if that means sacrificing his health to meet his deadlines. 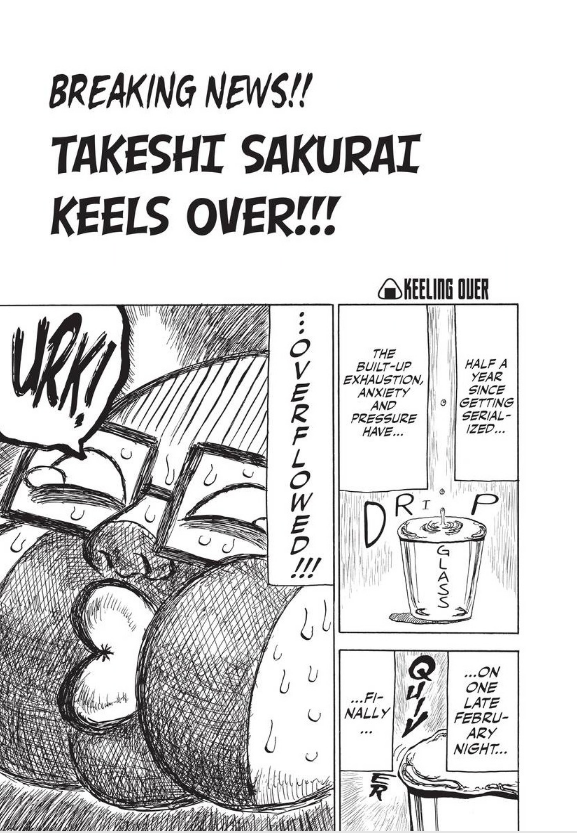 Sakurai’s relationship with MomiyaXX functions, in turn, as another driving force behind the overall story. Sakurai’s wife remarks at the beginning that he’s a little bit of a tsundere, hiding his true feelings behind his coarse nature. While this is intended as a joke, it does put the reader on notice as to how MomiyaXX loosens up towards Sakurai over the course of the story, even accompanying him on a research trip to the USA. While it is unknown whether or not any of these fictional characters are in any way a representation of their real-world counterparts, I can’t help but hope that this friendship, at least, is real.

It is a shame that Sakurai took so long to get a serialization off the ground because it is clear that the author has real talent. His art style reminds me of that of Inio Asano with its blend of cartoonish designs and artistic realism, even using photographs at some points for the background. Sakurai’s passion for all things Weekly Shonen Jump, too, shines through, which is something that I relate to on a personal level.

In this sense, the abrupt nature of The Right Way to Make Jump!’s ending, which is something that even the characters themselves acknowledge, is a shame. All good things must come to an end, but I would’ve liked to have seen more peaks behind the curtain and spent more time with the series’ characters. Was MomiyaXX really a tsundere? How do other mangaka work, and how does this differ from Kohei Horikoshi? I suppose we’ll never know. 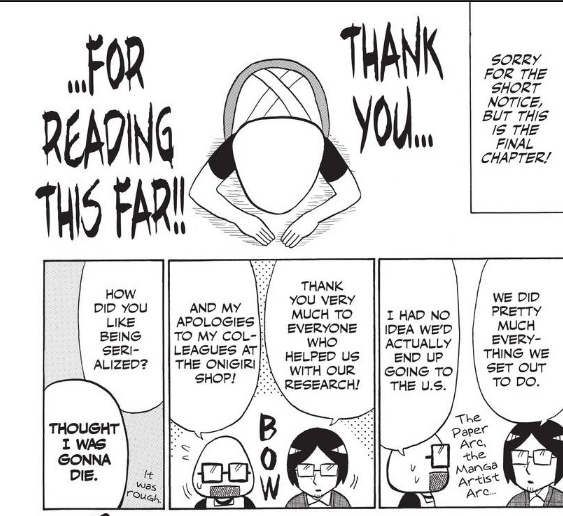 Nevertheless, the best thing that we can do is support the official release by reading the series via the official source. The Right Way to Make Jump!’s unique blend of character storytelling and industry insights is something that definitely doesn’t deserve to be missed, nor do you have many excuses to do so. Won’t you uncover the secrets of manga with us? I promise you won’t regret it.