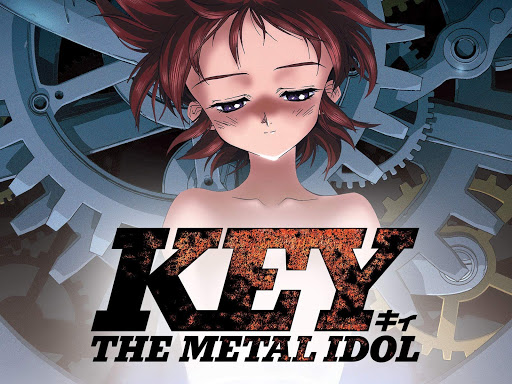 Key the Metal Idol is not as well known as some of its sci-fi contemporaries from the 90’s, like Evangelion or Ghost in the Shell. But, just like those titles, it is an intellectual treat for anyone willing to go back and find it.

If you’re interested in catching up on one of the most philosophical and feminist anime series of the 90’s, read on to find out everything you need to know about Key the Metal Idol!

Tokiko Mima, or Key, absolutely believes that she is a humanoid robot created by her grandfather, the scientist Dr. Murao Mima. She thinks that he builds her a new body every year that is one size larger, and she just grew up among humans in the Mamio Valley of the Japanese countryside.

When her grandfather dies, he leaves her one last message: if she can make 30,000 friends, she can become fully human. But she has to do it quickly, before her battery runs out.

Since the population of her town isn’t that large, she moves to Tokyo right away, where there are millions of people who could become her friend. When she gets there, she runs into her old childhood best friend, Sakura Kuriyagawa.

In Tokyo, Key soon finds herself enchanted with the pop idol Miho Utsuse, and realizes that a reasonable way to get 30,000 people to be her friend would be to become an idol singer herself.

Sakura, who has been working multiple part time jobs that pay the bills but don’t bring her fulfillment, is more than happy to help her. She and her friend Shuichi Tataki agree to be Key’s support team to make her a star and get her 30,000 friends.

Miho, however, is connected to the ominous Jinsaku Ajo. He’s an old rival of Dr. Mima, and is working to make new advances in robotic weaponry.

He’s developed drones who can be controlled by a remote operator, but it places such strain on the operators that they literally can’t continue to work after a set amount of time. Ajo believes that within the Mima family lies the “key” to getting past this.

(Ajo is also one of the despicable anime villains of all time. The extent to which he is shown to be willing to trample and abuse others to get what he wants is horrifying. And, as a viewer, enthralling.)

Key the Metal Idol follows Key’s efforts to become a star, and thus, a real human, while also paying attention to Ajo’s efforts to exploit her and all of his other stars. It’s also known for being a searing indictment of the entertainment industry, and the way in which it dehumanizes its performers. 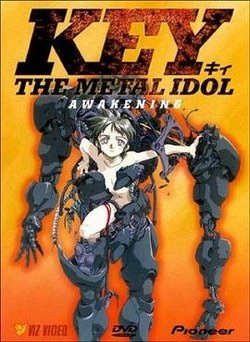 Sometimes, Key the Metal Idol is said to have two movies in addition to the OVA series, but that’s actually not quite accurate!

There are two big quirks with how this series is logistically presented. One is how, despite there only being fifteen episodes, it’s divided up into four “programs.” The other is the varying length of the episodes.

While there aren’t technically Key the Metal Idol movies, the last two episodes (14 and 15) are 90 minutes long. It’s similar to the last season of Game of Thrones having all movie-length episodes. That run time is particularly notable in Key the Metal Idol, though, because all of the previous episodes are roughly twenty-five to thirty minutes each.

Where to Watch Key the Metal Idol

Right now in North America, Key the Metal Idol is available for streaming both on Amazon Prime and Crunchyroll.

If you’re looking for a series that is intellectual and scathing but manages to also be a fun, exciting watch, then you can’t do better than Key the Metal Idol! This classic satire is worth a watch anytime.