Why The Tatami Galaxy Is A Unique Anime, Even Today 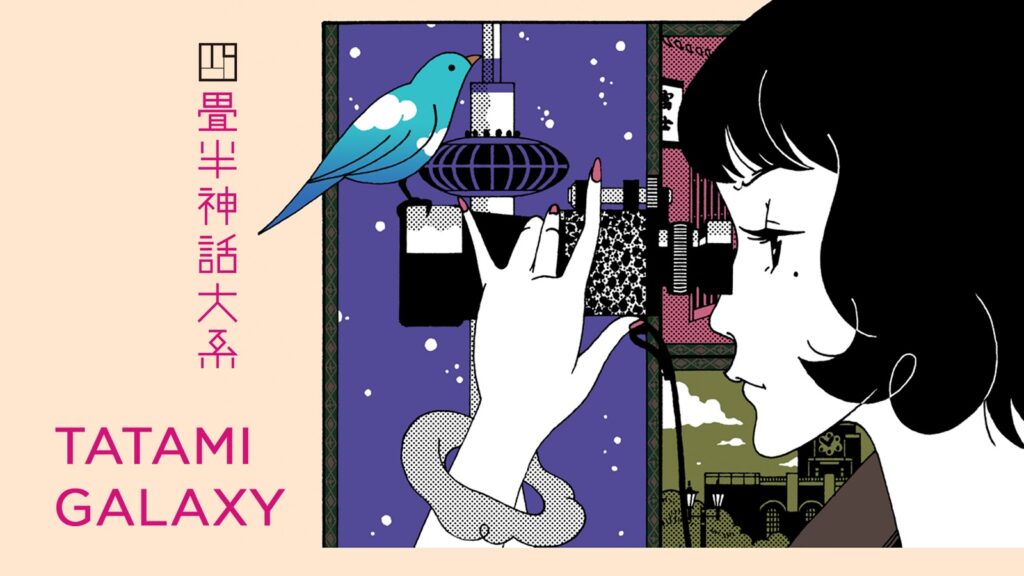 I still remember how my friend introduced this anime to me. He didn’t want to spoil anything for me and quite simply said: “I’ve never seen an anime that looks like this, it’s weird, and sometimes I have to press go back a few seconds to read the subtitles because the main guy talks to fast, but I think it’s my one of my new top animes.”

He watched a lot more anime than I did and yet was probably even pickier, so I took his words to heart and I watched an episode. By the end of it, I could already see how it left an impression on him.

What I watched was incredibly unique and endlessly entertaining. The characters are great, the story works perfectly in an episodic format, and yes, the art and animation are incredible. It’s a one-of-a-kind show that I think everyone should give a shot.

As much as I want to focus on the plot and characters and the message of this anime, I HAVE to talk about the visuals. It is understandably the first thing people notice and you’re always aware of it because it just looks so good! It’s an incredible mix of different styles and unique uses of color that bring the world to life.

Even when you’re treated to familiar settings and scenes, it’s always new. There are moments of deja vu, but nothing feels repeated. I’ve never watched anything that skirts the line of familiarity so well.

The unique visuals make more sense when you consider the show was directed by Masaaki Yuasa. He’s an anime director known for his eccentric works, including Ping Pong the Animation, and Devilman Crybaby.

His more recent works include the anime films Night Is Short, Walk On Girl (which acts as a spiritual sequel of sorts to The Tatami Galaxy), Ride Your Wave, and the series Keep Your Hands Off Eizouken! The Tatami Galaxy wasn’t his first work as a director, but it’s the first that caught the attention of so many.

To even talk much more about it is going into spoiler territory, which means it’s only fair I provide the options available for watching the series. Thankfully it’s not too difficult to do so! It’s available to watch for free on Funimation. Those more interested in physical copies will be delighted to know that the Blu-ray is available on Rightstuf!

There was only a Japanese dub for the anime so unfortunately there’s no English dub to help you watch the series without reading the quick subtitles.

With that out of the way, I’d like to gleefully go over the story and characters that bring this unique series to life. As few main characters as there is, the familiar plot thrives through them most of all.

A No-Name Student, Ozu the Yokai, and Akashi The Opportunity

The general format of the show is the following of an unnamed college student in Kyoto University as he reflects on the first two years of his college life. He goes to college as a plucky freshman with grandeur dreams of finding love within one of its many clubs (or “circles”).

These dreams are quickly dashed once he realizes that he’s not very sociable and as a result can’t find himself able to permeate with the fellow students in the club he chose. The one companion he successfully connects with is a fellow student named Ozu, who comes to him.

In his own review, the protagonist portrays Ozu in a negative light, saying that meeting him is the cause for all that goes wrong from the past two years. Ozu is a very mischievous student who convinces the protagonist to help him pull pranks and enact other malicious acts.

Ozu’s appearance is seemingly exaggerated by the protagonist, with sharp teeth, pointy ears, and an impish face.

Another student who the protagonist meets is Akashi, a junior one year younger than him. He’s immediately taken aback by her but doesn’t dare approach her as other men do. Over time they make acquaintances with each other and she warms up to him.

When she loses a small keychain figure he promises to help her look for it, and although he does find it and hangs it up as his switch light so he doesn’t forget, he does indeed forget his promise.

As the consequences of his and Ozu’s actions finally catch up to both of them, they find themselves in an outrageous situation. The protagonist finds himself thinking that his misfortune is all because of the circle he had joined as a freshman. It ends with him wishing that he had joined some other circle where he surely would not have wasted the past two years of his life.

The above may sound like a review for the entire series, and I suppose that in a way it is…partially. The truth is that the above is a review of the first and many other episodes. As the protagonist bemoans where his life is in his third year of college, he declares that his life would have been better if he had joined a different circle.

An episode ends with time rewinding back, and the following episode starts again with him as a happy freshman in college who chooses a different circle.

Throughout each of these parallel worlds, the protagonist is introduced to a variety of characters and begins to see them each in a different way thanks to the different choices he makes in each world.

A supposed god of matchmaking he meets is merely a super senior, but there is something unique and almost omniscient about him that makes you question whether he really is a deity of matrimony. The dental hygienist is a drunk who likes to lick people’s faces, but her life is caught between the love of two men.

But no matter which circle he joins, certain events and characters are almost always the same. He fails to socialize in the club and meets the implike Ozu. He meets Akashi and the two hit it off, but he fails to connect with her any further. And he meets a fortune-teller that tells him to grab the opportunity that dangles in front of him, to which he rarely understands.

For these characters being constants, it’s only in the end that he understands their importance to him. A final world is shown in which he doesn’t join any clubs. He spends his time to himself in his 4.5 tatami room and he’s overjoyed with a sense of freedom and safety.

The veil over this safety is soon dragged away as he realizes his own depression and wish to escape, which is expressed as him being stuck in a world of infinite tatami rooms. It’s in this world that he realizes that he’s fallen for Akashi and that he wishes he had met Ozu as he was always his only friend.

I won’t spoil the ending because even as the protagonist alludes, people aren’t interested in the happy ending. While The Tatami Galaxy does have a nice ending, (especially after bleak revelations) it’s the journey there that’s the most enjoyable.

What feels like watching the protagonist taking similar stumbling steps is a build-up to the satisfying pay-off when he’s able to walk forward with confidence.

While we all may feel regret at one time or another in our lives, The Tatami Galaxy is not about the usefulness of going back and changing things. The protagonist does indeed use his knowledge of other worlds by the end to fix everything, but the entirety of the series before it shows each one of them being another hopeless venture that ultimately leaves him unhappy.

He’s able to find joy in certain aspects of each club, but he has to force himself into the clubs themselves.

What makes him happy are the constants in each world. This is a series about the meaningless efforts spent wondering what could have been different and the futility of forcing yourself into something you don’t belong in. It’s about living a life with no regrets and finding the things that will always make you happy.