The Uncanny Labyrinth: What Makes Shaft Studio the Good Weird? 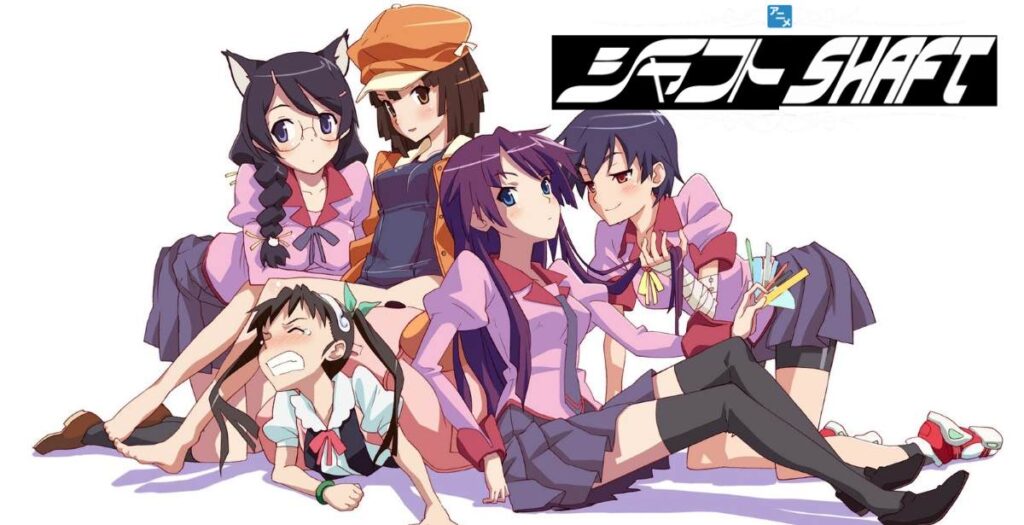 I think most people who grew up with anime, localized for better or for worse (emphasis on worse), knew something was a bit different about those ‘cartoons.’

These were the qualities that came to define anime during the 90s and early 2000s.

There’s a reason why anime-esque art styles prevail among fan artists and professional artists to this day.

Of course, the anime industry has made large strides since then.

One of these strides, mixed media, being spearheaded by Shaft Studio.

What Is Shaft Studio?

Shaft Animation Studio was founded by Hiroshi Wakao in 1975, his past experiences in the anime industry including having worked on the film Astro Boy: Hero of Space (as its Animation Director; 1964) under Osamu Tezuka’s own Mushi Production.

Shaft’s first entry was a cutesy show called Elves of the Forest co-produced with Zuiyo (now known as Nippon Animation of Hunter x Hunter fame) in 1984.

Wakao stepped down in 2004 and was succeeded by Mitsutoshi Kubota whose current era of animation is what Shaft is most well known for.

Speaking of 2004, the animation studio adapted a rom-com manga with a supernatural twist called Tsukuyomi: Moon Phase during the same year. Tsukuyomi follows the ‘master-servant’ dynamic between humble photographer Kouhei and the vampire, Hazuki, he unwittingly freed during a shoot.

I mention this as this type of story proved right up director Akiyuki Shinbo’s alley.

Shinbo would go on to influence almost every future Shaft work with his distinct ‘flavor;’ this flavor being vibrant colors, quick cuts, and the uncanny use of mixed media.

While the studio has well over sixty projects to its name, its take on the Monogatari light novel series and the wholly original Puella Magi Madoka Magica (this writer’s personal favorite) are nothing short of iconic.

The second of Nisio Isin’s fantasy/paranormal light novel series, Bakemonogatari, was given an anime adaptation by Shaft in 2009 (its run ending in 2012).

Bakemonogatari (can be translated to either ‘Ghost Story’ or ‘Monster Story’) is the first season of a larger Monogatari universe, each season and/or spin-off being named after Isin’s works.

The show opens with human-turned-vampire Koyomi Araragi saving female classmate Hitagi Senjōgahara from a weightless fall, her literal lack of weight being the byproduct of a Crab God’s intervention.

While the show deals in similar odd encounters between Koyomi and other cursed girls, it’s difficult to pin down its overall tone. In a similar vein to Yuki Urushibara’s paranormal manga Mushishi, Koyomi’s story is mostly character-driven and episodic with each new arc taking up two to five episodes.

Having watched Puella Magi Madoka Magica before Bakemonogatari, my younger self made the mistake of thinking the latter’s visuals had been influenced by the former.

On the contrary, Koyomi and Hitagi’s adventures are more on the meta side, the fourth wall-breaking humor and shifts in animation and photorealistic imagery culminating in an absurdism distinct from Madoka.

Not to mention fantasy and reality are far more blurred within the context of the world.

The show follows the titular Madoka Kaname and tomboyish friend Sayaka Miki as they stumble into the dangerous world of magical girls and witches.

By this point, even people who haven’t watched Madoka know the drill.

Needless to say, the mysterious transfer student Homura Akemi turns out to be the least of Madoka and Sayaka’s problems.

Like in the Monogatari series, mixed media is used to distinguish a foreign concept.

The witches of Madoka take the form of monstrous lace-and-paper women who operate within reality-warping labyrinths. Whenever a witch traps an unsuspecting human or two in its territory, the victims are often prompted to kill themselves while being swarmed by familiars, magical minions.

This sudden shift in animation is always marked by musical and/or visual cues relevant to a witch’s theme.

Not only does Shaft’s mixed media establish a major tonal difference between magical girls and witches, but it’s simply disturbing and mesmerizing to see.

The Art of Animating “Delicious”: Interview With Yoshiaki Ito Pt. 2

‘Zaregoto’ Is the Shaft Anime You Never Knew You Needed