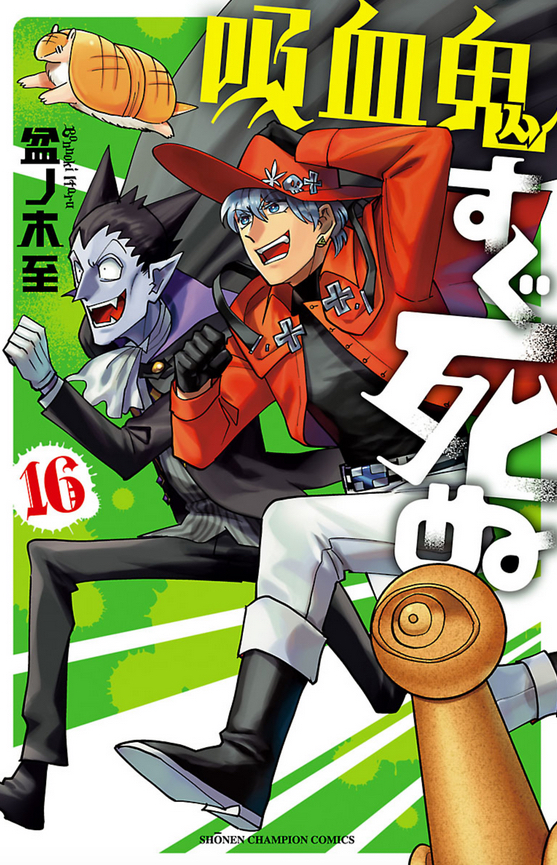 Jun Fukuyama and Makoto Furukawa will play the leads in a comedy anime series about a vampire and a vampire hunter.

The 2021 TV anime The Vampire Dies in No Time will be adapted from a gag manga series of the same name by Itaru Bonnoki.

The Vampire Dies in No Time, also known as Kyuketsuki wa Sugu Shinu, has run in Akita Shoten’s Weekly Shonen Champion since 2015.

The manga focuses on a vampire, Dralc (also possibly Doraruku), and a vampire hunter, Ronald. At the beginning of the series, Dralc is rumored to be invincible.

We soon learn that the fearsome vampire has kidnapped children. Ronald is hired to save the kids from the foul fiend.

When he gets to the vampire’s castle (which is in Saitama Prefecture, for some reason), he discovers that Dralc is actually sort of a wimp.

It seems that Dralc turns to dust easily (hence the title of the manga). The vampire isn’t invincible, but he is immortal.

Oh, and the children?  It seems that they just like to play in the castle. Huh.

The unlikely pair join forces to solve various problems.  Of course, there are plenty of slapstick gags along the way.

In the anime version, the vampire will be played by Jun Fukuyama.  He also voiced Lelouch vi Britannia in Code Geass, Joker in Persona 5,  Ichimatsu in Osomatsu-san, and Koro-sensei in Assassination Classroom, among other things.

Makoto Furukawa will voice the vampire hunter Ronald. He has previously played Saitama in One Punch Man, and Benimaru in That Time I Got Reincarnated as a Slime.

Hiroshi Kojina will direct the anime series.  He previously directed the 2011 version of Hunter x Hunter.

Madhouse will be the animation studio.