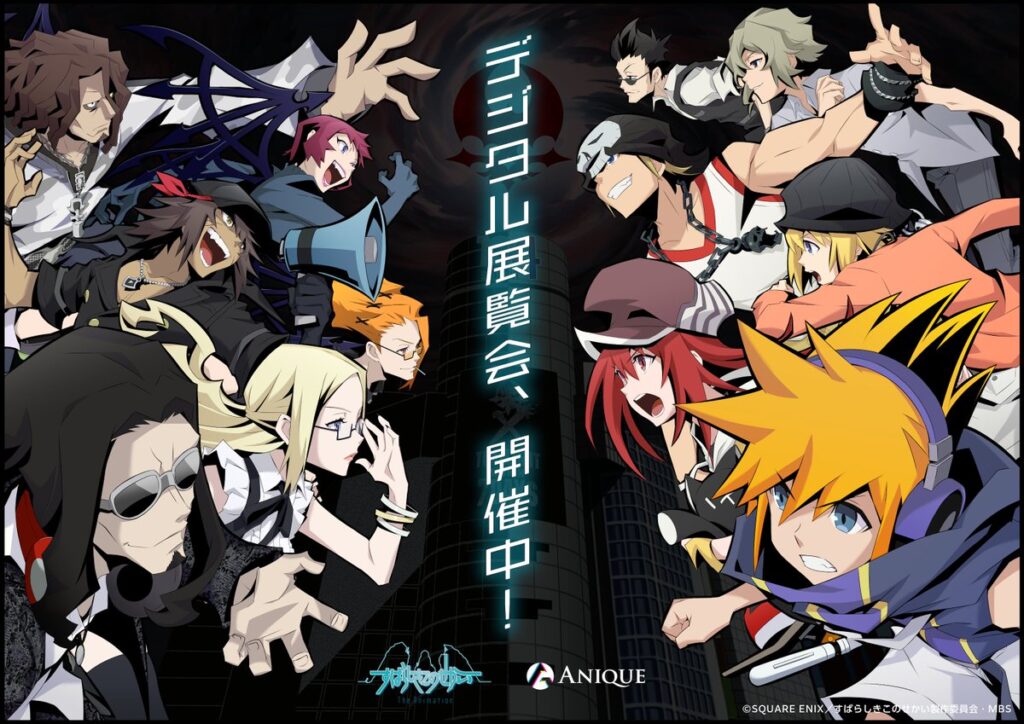 An exhibition for The World Ends With You The Animation is taking place entirely online ahead of the anime’s premiere next month, showcasing genga (key animation drawings), illustrations from collaborative artists and fans, and more.

One of the most anticipated anime of the upcoming anime season is undoubtably The World Ends With You, based on the popular Square Enix game of the same name. It looks promising, too, with a distinctive art style and a strong use of CG animation. In anticipation of the anime’s release, an online museum gallery has been launched to promote the series and showcase art for and inspired by the series.

The exhibition invites you into a digital museum with art on the outside and the walls in the museum taken from the upcoming anime. Greeting you at the door is none other than Neku himself, who invites you in. The first room you enter in the exhibit is the Anime Visual room, which mostly consists of key visuals from the show’s promotion to date, and will be familiar to anyone following the anime’s promotion until now. Still, seeing it in this setting with comments from the staff is nice to see.

The next room is where things become arguably more interesting. The Artist Collab room features work based on the series from a number of artists from around the world, with multiple works from each artist. This includes Ilya Kuvshinov, Susumu Kuroi, and MiGiiiiii. It’s nice to see the characters re-interpreted in these artists’ unique styles, and really feels like a celebration of the series and its legacy up until now. The Fan’s Graffiti Wall is in this same idea, except it’s made up of fan art from around the world that was shared via Twitter.

The final room, titled ‘Episode’, is a preview at genga drawings from the first episode of the anime, retelling the events of the opening of the game, and is accompanied by a full composite of that scene from the episode itself, giving a peek behind the curtain at the anime’s production. Of course, once you’re done, you can buy a skateboard or framed art from the museum shop.

The online exhibition is free to browse online from Anique. The World Ends With You The Animation will stream to English audiences in April from Funimation.

@TWEWY_PR via Twitter
©SQUARE ENIX／すばらしきこのせかい製作委員会・MBS
The World Ends with Youthe World Ends With You: The Animation
Join Our Discussions on Discord
Join Now