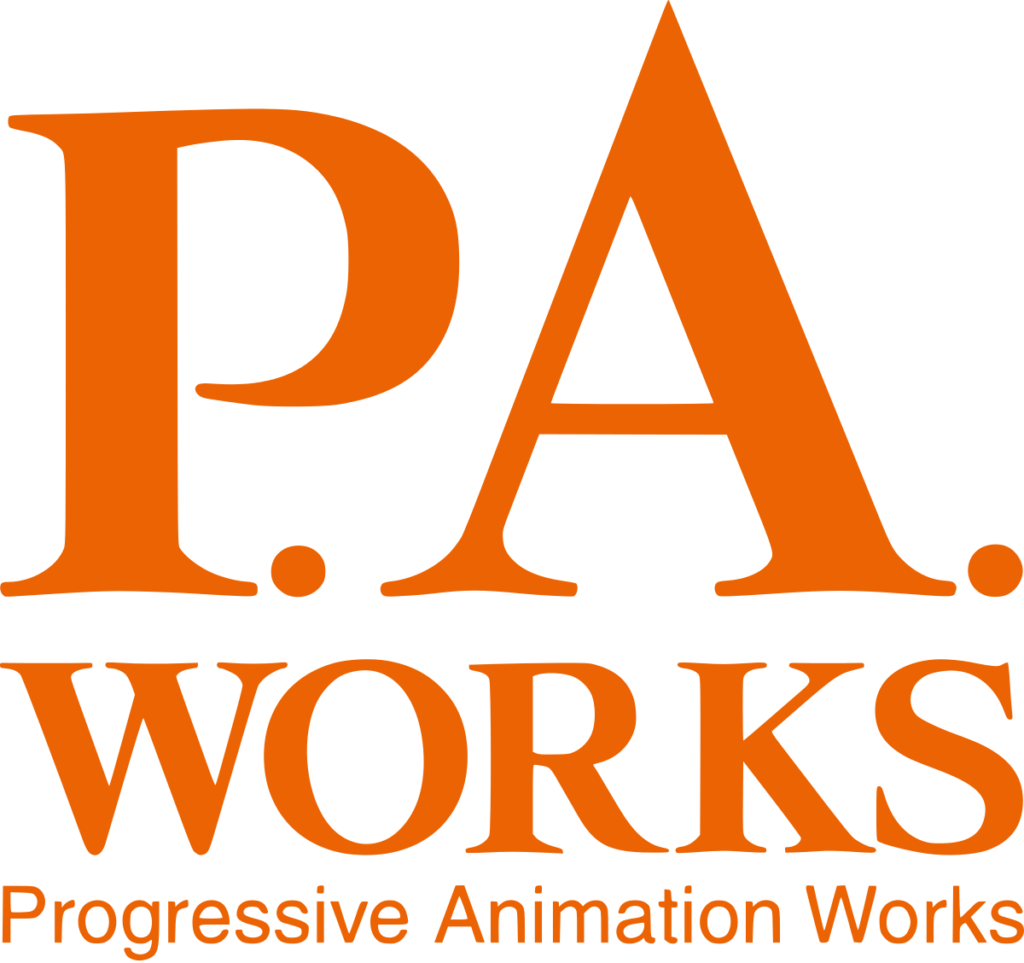 PA Works was founded in 2000 and located in the Toyama prefecture. The president, Kenji Horikawa once worked for Tatsunoko Production, Production I.G and Bee Train Production. In their office the flow from drawing and digital photography take place, and production and direction. Although they typically work on producing anime they have worked on various video games as well. Their first anime series that they worked on as the main animation studio for post production was titled True Tears and was released in 2008. Since then they have animated a total of 24 anime series and 6 films. Progressive Animation Works is a Japanese animation production studio that has grown in acclaim in recent years. The studio has become well known for high quality storytelling and artwork. Immediately when you see something by them you can expect to be seeing a classic. Horikawa is a hands-on leader and loves all aspects of the process. The company has a diverse selection of anime from mecca to slice of life to horror. The production company also is involved with the production of video games and has collaborated with Production I.G. and Bee Train in the past.

True Tears is directed by Junji Nishimura, this series contains 13 episodes and was inspired by the visual novel True Tears, although there is practically no common narrative to the two. Based around a high school student, Shin’ichirō Nakagam who is very artistic. He lives with a classmate named Hiromi Yuasa, who moved in with his family after her father died. He has always admired her but now he is too shy to talk to her as she is popular and then rather cold to him at home. The series takes place in Toyama Prefecture, Japan. P.A.Works, is also located in Nanto, Toyama, and they modeled the places in the series after their town.

The animation is bright and airy with bold colors yet compositionally subdued and peaceful as well. The use of light and nature creates a beautiful warm palette for this romantic anime series.

Angel Beats is directed by Seiji Kishi, and written by Jun Maeda and has 13 episodes. The plot of this anime focuses on the afterlife and follows a boy named Otonashi who is a boy who has lost his memories of his life after dying. He is enrolled in an afterlife school and befriends a girl names Yuri who invites him into the Afterlife Battle, which is an organization she organizes that fights the student council president, Kanade Tachibana who also goes by angel and she has supernatural powers. It explores death and reincarnation but the inbetween space is the mystery of this show. The show opens with Otonashi only recalling his last name and Yuri offers him a gun and instructs him to shoot an angel. What unravels over the course of the show is a battle of Yuri’s army to delay his next life. Otonashi finds himself perplexed as he fights for immortality but struggles to remember how he died and is faced with the potential reality of perhaps not wanting to continue fighting.

This anime series is based off of the fantasy novels written by Noriko Ogiwara. The original character designs were done  by Mel Kishida and it was directed by Toshiya Shinohara. Consisting of 12 episodes, the series revolves around Izumiko Suzuhara, a 15-year-old girl who was raised at a shrine and she has the special power to destroy any electrical device she comes in contact with. She learns that she is a yorishiro, a vessel for carrying the Shinto spirit known as Kami. The style is soft with more exuberate eyes. PA Works really delivers here with the animated effects showcasing Izumiko’s powers with electricity.

Based off of the mystery series Haruta & Chika, is a Japanese mystery novel series by Sei Hatsuno. It centers around two friends, Haruta and Chika, who are members of their high school’s wind instrument club. They spend time studying and trying to recruit new members, but when a strange occurrence happens at school they band together to try to solve the mystery.

The animation is stylized and bright with school uniforms and sparkly big eyes. The facial reactions are enjoyable and the swift movements and line work are impressive.

This 24 episode anime is a dark fantasy action show filled with dynamic characters and crazy weaponry. The show takes place in the land of the continent of Eastald and have been forcefully united under a single ruler from the War of Unification. Soldiers were implanted with fairy organs to be able to summon powerful fairies to fight under their command called “Fairy Soldiers.” However, 9 years later certain rogue fairy soldiers use the post war instability to engage further with rising conflict. “Dorthea” is formed, a government agency to combat illegal fairy users. With an immense amount of action and drama, the animation is dark and intense. Natural elements like rain and fire are pivotal and the neon electric fairies are detailed and executed well. The faces and wardrobe are much more western and has a strange medieval yet steampunk vibe. 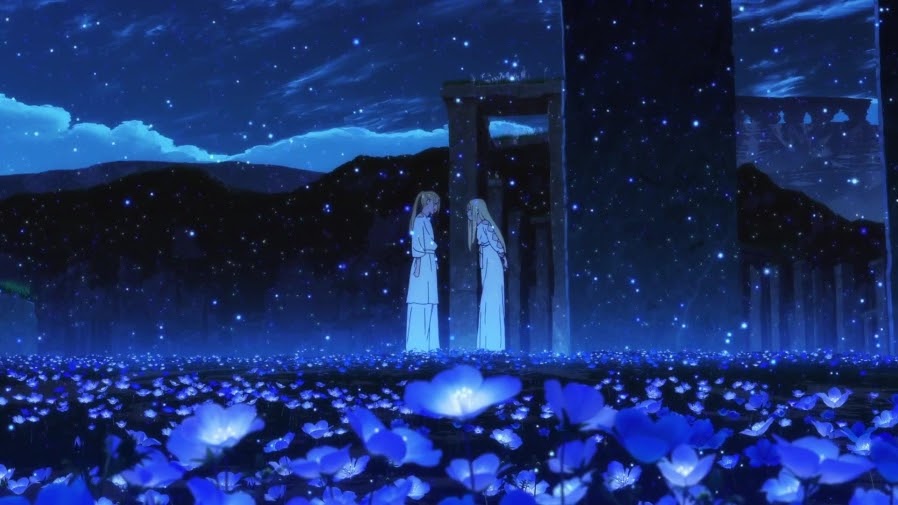 Maquia: When the Promised Flower Blooms

This high fantasy drama film was produced in 2018 was directed by Mari Okada, and produced by P.A.Works. It was both Mari’s directorial debut and PA Work’s first full length animated feature. The film is about the land of Iolph, where people stop aging in their mid teens. The story begins with Maquia, who has no parents but feels at peace. However, an army invades seeking their secret to immortality. She is able to escape and wander the forest alone until she finds Erial, a baby boy who has lost his parents. The story unravels and details their changing relationship as he grows up and she does not.

The hues of blue are powerful in the animation with an immense amount of fantasy and magic imbued into the eyes, the water, the flowers and the landscape. The elements of fantasy, medieval warfare take on a western discourse, but with the same animated eyes and Japanese emotionality.

Recently P.A. Works hosted a livestream presentation and announced a new anime project called The Day I Became a God, which will premier in October. The animation studio producer Mitsuhito Tsuji revealed in April 2019 that he was hoping to work with Jun Maeda on an original work with the studio. The Twitter account for Angel Beats! then foreshadowed last month that there would be an announcement in regards to a continuation project after the two franchises very soon. This year is the 10th anniversary of Angel Beats! Maeda first collaborated with P.A. Works to iron out and create the Angel Beats! mixed media project in 2010. Again in 2015 they later collaborated again on the Charlotte anime. Maeda is well-known for writing major visual novels such as Kanon, Air, Clannad, and Little Busters, and these all received anime adaptations. In addition, he also composed the music for these visual novels, as well as the themes for both Angel Beats! and Charlotte. He also has experience with the supervision of musical production, for other Key visual novels, such as Kud Wafter and Rewrite.

Progressive Animation works in a studio that continues to produce incredible shows and artful concepts and design that leave a lasting impact while creating classics for years to come. They successfully cultivate imaginative stories with teams of creatives that are leading innovators of their fields. Enjoy their wide assortment of anime and movies, all will leave you astounded and impressed!