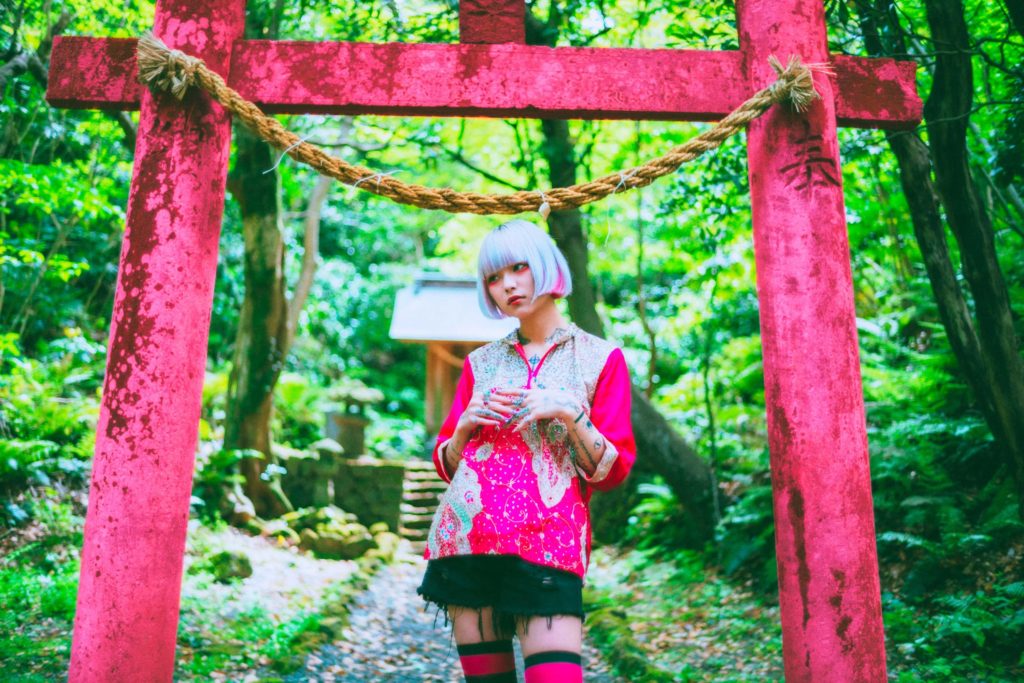 In this feature, OTAQUEST aims to help introduce some of Japan’s best musicians to the world. Today, a special look at how Japanese artists are interpreting — and shaping — an emerging style of electronic music that is just now starting to be sucked up into mainstream pop. J-pop, Vocaloid and more obscure corners of the nation’s music community have helped to shape the sonic and visual image of this internet-scene, while a new generation of creators across the country have come to the style, offering their own interpretation of it.

‘HyperPop’ isn’t an easy stylistic term to define, but it’s also among the most important if you are following the shape of global music in 2021. Artists falling under this umbrella (highlighted in recent years by 100 gecs, Gupi & Fraxiom, glaive, and 8485 among many others) mix blown-out bass with bubbly synth melodies, delivering vocals in a half-rap-half-sung style with the rough edges often on display. It’s a genre-less genre that’s very online, but anchored by emotions ever present in the 21st century. It has a much ballyhooed Spotify playlist, a patron saint in Charli XCX and has started seeping into the catalogs of pop acts like Doja Cat and SEVENTEEN.

A new crop of Japanese artists have become attracted to this style recently, and have been putting their spin on it, from the often overlooked corners of SoundCloud to major talent agency artists. Like all new musical trends, part of the intrigue is just seeing how far an idea can spread. Yet in the case of Japan, it’s especially interesting to see how creators put their own angle on a nebulous concept like ‘HyperPop,’ and how some of them are creating among the most compelling work you could associate with this world.

To help expand your HyperPop worldview, here’s a quick intro to how it has manifest itself in Japan.

But First, Japan’s Influence on HyperPop

Before talking about HyperPop in Japan, it’s important to look at how Japanese music has helped shape this very concept. It’s something touched on in Noah Simon’s very good documentary about HyperPop (first installment above), with artists citing a lot of Japan-born video game music as a vital influence, along with netlabels such as Maltine Records. There’s also a great bit about how J-pop itself offered inspiration, primarily through producer Yasutaka Nakata’s work with Perfume and Kyary Pamyu Pamyu. Oh, and of course Japan-born aesthetics play a huge role in all of this too, via anime and more.

Part of the joy of concepts like HyperPop is playing around with what existing music could be linked to it, and that’s a game you can play extensively with Japanese artists from the late 90s onwards (like, this is definitely something with plenty of that DNA within). That’s for another feature though; just know the country’s influence stretches back a bit.

At the Forefront: 4s4ki, Rap and Borders Collapsing

One of the through lines connecting disparate HyperPop artists is the idea of rejecting traditional musical boundaries. Not rejecting genre per se as much as happily taking ideas from a wide array of sources and mixing them together into something different. It’s something Japan’s music scene has been fond of for a while now, best captured by the early 2010s heyday of netlabels and the then-nascent Vocaloid community. A generation of creators has emerged more recently who are even more natural to this approach, digital natives less worried about old boundaries and more interested in just crashing ideas together.

The single best creator in this space (and, maybe, the person responsible for the best music out of Japan over the last two years, period) is 4s4ki (pronounced ‘Asaki’). Debuting in 2018, her early work wasn’t quite as wild as it would get, but even within more sentimental dance-pop she displayed an interest in clattering percussive elements and rap as primary means of expression. Last year served as her breakout, releasing album-of-2020 contender Omae No Dreamland which found connections between netlabel culture, Japanese hip-hop and J-pop, using then-emerging HyperPop imagery as something to play around with then try to replicate. Later in the year, she re-released that album alongside an entire EP’s worth of new material on Hyper Angry Cat, the best album of 2020.

Both those albums arrived at a time when new communities of music were emerging in Japan, the sort of sounds that could be tagged HyperPop if you really pushed it, but aren’t obvious about such a declaration. That’s especially true through a new generation of rappers, who emerged at the tail-end of the ‘SoundCloud rap’ generation but bleed over to this rising style too. Tohji, Saint Vega, (sic)boy and more aren’t far from the genre-blending experiments 4s4ki has unleashed. She’s even worked with one prominent member of this scene, Gokou Kuyt, who stands as one of the best reps of this.

Similarly, artists like Haru Nemuri and CVLTE bring the same energy to rock (the latters recent praystation 2 is a particularly highlight of where all of this is going, working in more metal and horrorcore touchpoints), showing the breadth of ideas floating out there. 4s4ki, meanwhile, remains at the forefront. Her just released Castle In Madness catches her more consciously embracing HyperPop ideas (not to mention the aesthetics of it, too), but she’s just… so good at doing it, while also weaving in curveballs like the Trekkie-Trax-drizzled ‘melt’ (below) and honest-to-goodness ballads with closer ‘kkkk.’ She shouldn’t just be the face of Japanese HyperPop…s he should be one of the global flag bearers for this sound.

Just as important has been the work of ahead-of-the-time creators operating on online platforms such as SoundCloud. Some, like rappers nate, p°niKa and Lil Chill, first emerged during the SoundCloud rap heyday, but sticking around and finding new angles to their art afterwards. Then there were producers like hirihiri, coming out of a more netlabel-adjacent place, having released work on Omoide Label and Maltine Records among others (the latter going as far as to offer their interpretation last year). That’s just some of the artists in Japan who, accidentally or otherwise, have been playing around in this sandbox for years now, helping set down a path that many more would travel.

Zoom out a bit more, and you also find names floating around more experimental scenes doing great work that could fall into this category as well. Lil Soft Tennis (above) and Le Makeup fit the bill, as do left-of-center creators such as NTsKi and tamanaramen. This hints at one of the harder parts of trying to document this development; there’s just so much happening, and so many people who could possibly be linked to this blossoming scene. Surely, some are missing from this brief overview (what about Mom? Talk about a pop oddball pushing the tempo ahead). Yet the above all played an important role… and are still at it.

Tokyo creator MANON feels like a decent name to be nudging HyperPop sounds and sights towards the mainstream. She’s signed to AsobiSystem, the talent agency housing Kyary Pamyu Pamyu among others, and this spring’s ‘GALCHAN MODE’ attempts to graft the trend onto someone who could, in theory, bring it more to the mainstream. It’s not like, I don’t know, Arashi trying out 100 gecs sounds, as MANON has always been a bit more wonky than other aspiring pop acts, but still a big development, albeit one blessed with a sense of J-pop’s Eurobeat history, helping give it a little extra levity in the grand narrative of Japanese music.

This year has been a big one for the idea of Japanese HyperPop, thanks to familiar names and new ones alike. Highlights from the first six months include nate teaming up with producer Yamakagebeats for a sweet-and-savory set of songs (above), while Lil Soft Tennis embraced pop-punk angst on Bedroom Rockstar Confused. Hyperactive new projects Dr. Anon features p°nika among others (who are also pushing things forward). The aforementioned Mom, meanwhile, continues flirting with being a player in mainstream Japanese music.

Just as thrilling, though, is watching new names appear to add fuel to this fire. Collective STARKIDS capture Gen Z ennui and energy perfectly in their busy-body music (one particularly good example above), while new creators like Cuffboi, cyber milk, masaboy, Yani Melancholy, lil beamz and many more offer new perspectives on this style, whether they strongly identify as HyperPop or operate in their own territory (which, frankly, is pretty HyperPop of them). It’s becoming more clear that this ethos is present in Japanese music…. and being re-imagined by creators looking to put their own spin on it.