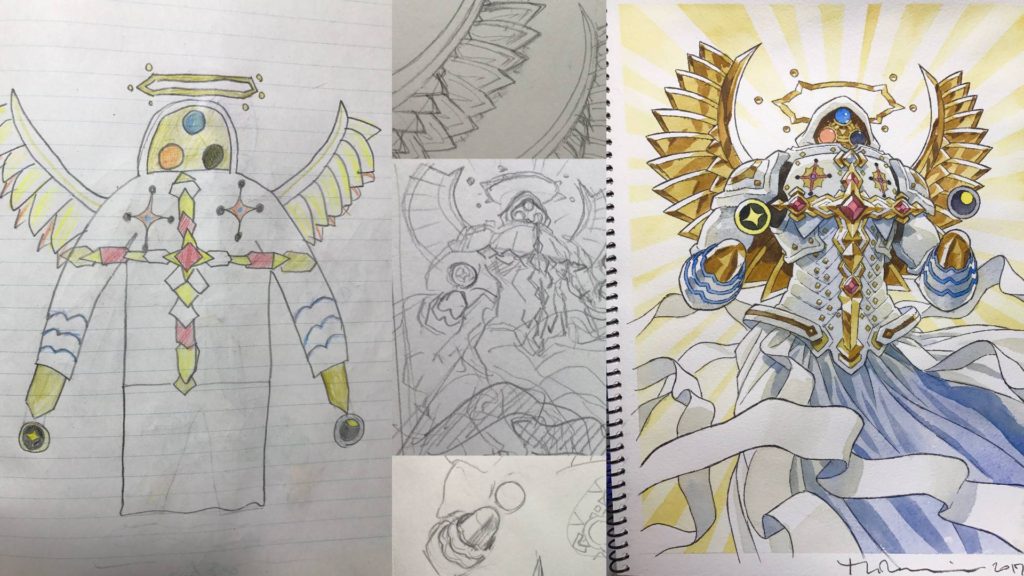 Every now and then you’ll stumble across something on the internet that’ll leave you with an entirely wholesome smile on your face. Sometimes it’s in the form of an adorable image of a dog doing something that it probably shouldn’t be, and othertimes it’s because you’ve found what could be one of the cutest instances of parenting done right. It all started in December 2016 when acclaimed creative Thomas Romain (Code Lyoko, Space Dandy, Symphogear) saw a drawing his eldest son did during a family outing. It was a creative illustration, and utilized various outside-the-box extras such as artificial fur (big props for creativity!) and a blend of colorful buttons. Taking inspiration in the image, Thomas would go on to professionaly illustrate his son’s character, presenting it to the whole family as an unintentional Christmas gift. From there, the rest is pretty much history — something that would go on to launch one of the most wholesome examples of parenting done right.

What I’m sure Thomas’ sons didn’t realize at the time of this initial drawing was that they would go on to launch an entire series of illustrations and creations spanning more than six months. Throughout the “Father & Sons’ Design Workshop” series, we’re showcased an entire catalog of characters designed by the Thomas’ sons, and then illustrated by Thomas himself. Bridging his childrens imagination with reality, we’re offered not just a wholesome set of drawings, but a legitimately impressive collection of illustrations featuring some gorgeously imaginative characters.

Roughly four months after the initial illustration was created, Thomas decided to launch a Patreon campaign in an effort to help make this a more sustainable, long-lasting creative hobby for the family. Spanning over 29 illustrations, we’re presented with a plethora of eye-catching monsters and captivating life forms. Their most recent collaboration between father and son, simply titled “Pink-Head Glider”, features an illustration that looks like it could have been torn out of a mashup between FLCL and Symphogear:

With over 230 patreons already supporting the project, I’m extremely excited to see just where this all leads in the coming months and onwards. Between the smile-inducing brilliance of the whole project and the legitimate interest as to what might come next, I can’t help but want to share this with the world. If you’re interested in supporting the project, be sure to check out the Patreon page to help keep the project alive. If you simply want to show your support to Thomas, you can also check him out on Twitter.

A short making of video.
The full version is available to our suporters on Patreon⭐️We’ve just reached 200 patrons!https://t.co/1inMBdpi55 pic.twitter.com/n3Q6pKe9BJ

Symphogear Is An Unparalleled Watch All The Way To XV