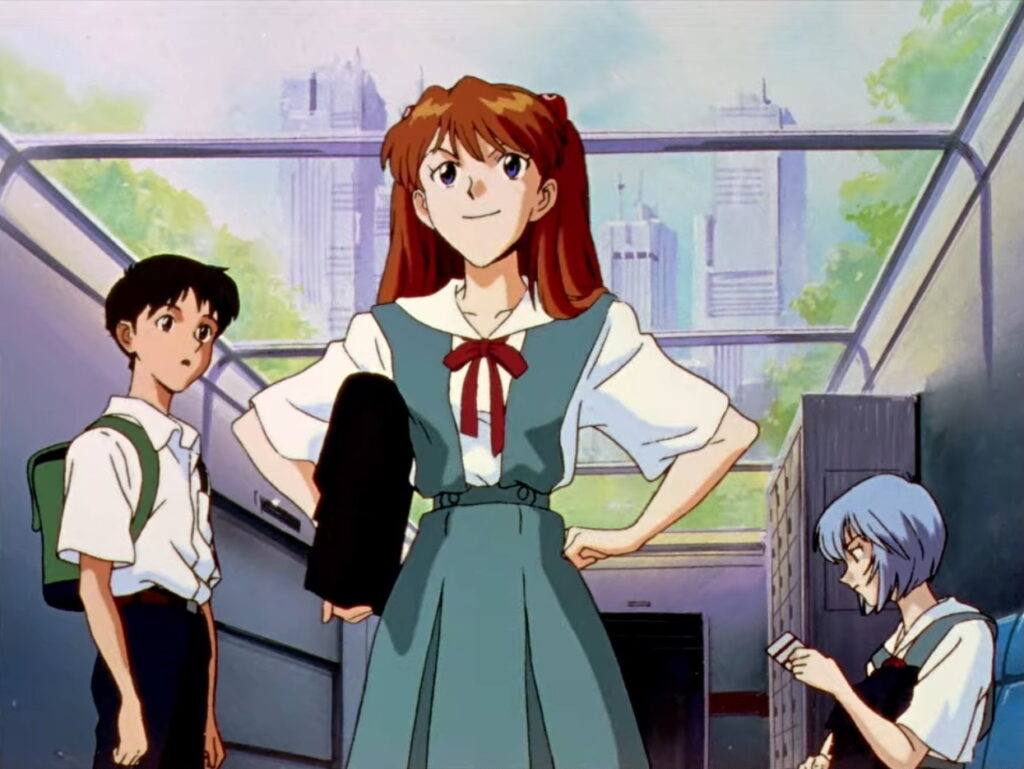 In a world where conversation surrounding Neon Genesis Evangelion is dominated by either debate on the series’ multiple endings, the significance of its religious and Freudian imagery, or who is best girl and/or boy, it can be hard to forget that it started out as just another episodic mecha show.

If you watched episode one with no prior knowledge, you wouldn’t be able to predict where the story ends up by episode 26 or, indeed, The End of Evangelion. While it certainly proceeds with a certain amount of creative and directorial flair (the scene with Rei on the street being an excellent example of this) there is really nothing there to suggest you will be reflecting on the nature of your own sadness or your reliance on others by the very end, a testament to how masterfully the story proceeds and builds over the course of those two-dozen episodes.

There are flashes here and there of Hideaki Anno’s original influences: Space Battleship Yamato, Ultraman, and Mobile Suit Gundam in particular. In my mind, the best examples of this actually come together towards the midpoint of the show: episode 9, episode 10, and episode 11. While they’re by no means perfect, they have stood the test of time as three excellent episodic Evangelion episodes. 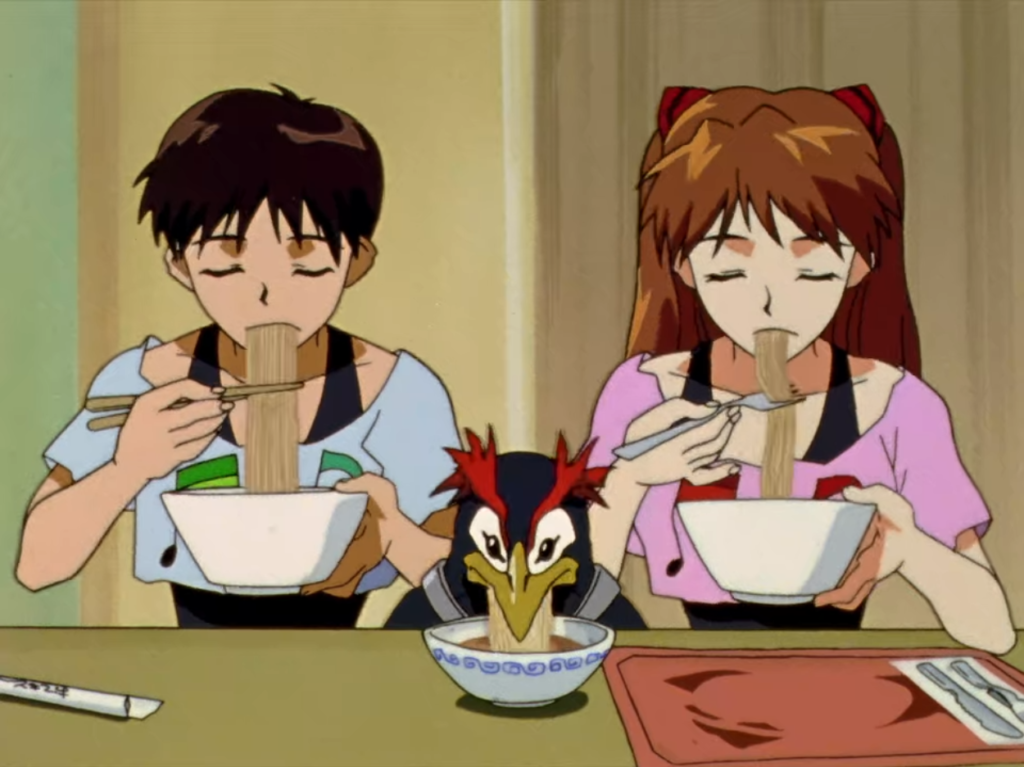 In an interview with Neon Genesis Evangelion assistant director Kazuya Tsurumaki conducted for the ‘Red Cross Book’, a pamphlet distributed to cinemas attendees of The End of Evangelion, he admits that ‘the boundary between Parts A and B of episode 16 could be considered the dividing line between the front and back of “Evangelion”.’ After this, the series took on a much more introspective tone, facilitated by the more psychological attack styles of the later Angels and the tragedy surrounding Toji Suzumura. But that is a story for another time.

For now, I think that we can also consider episode nine to be another turning point. In the previous episode, ‘Asuka Strikes!’, we are introduced to the series’ final main character and the final piece of the iconic Eva pilot trio. While other characters, such as Kaworu and Toji, are added later, they don’t stick around for that long and aren’t usually considered part of the main cast. As a result, episode 9 can be seen as the first ‘full’ episode of Neon Genesis Evangelion, or at least in terms of character dynamics.

That being said, it’d be difficult to argue that all characters see an equal amount of screen time: Asuka is ultimately the focus of Neon Genesis Evangelion episode 9 over Rei. Titled ‘Moment, Heart, Together,’ it revolves around her and Shinji being forced to settle their differences and synchronize their movements to take down the twin Angel, Israfel.

Even so, Rei still does get a look-in, and when she does, it’s very important: her effortless synch with Shinji is ultimately what pushes Asuka to drop her pretenses and open up her heart to the one she supposedly hates, even if this might be a product of her Hedgehog’s Dilemma.

Admittedly, part of the reason I love Neon Genesis Evangelion episode 9 so much is because I love Asuka. Unfortunately, I’m one of those people who sees their own insecurities reflected in her struggles with others, so I obviously also love the part where she accidentally sleeps in Shinji’s bed and we get to see her more vulnerable side.

Still, the way the two characters have to team up to defeat the Angel should be entertaining for anyone, regardless of their character preferences. An episodic Evangelion story where the big bad alien is defeated by mastering a dance mat? Sign me up. 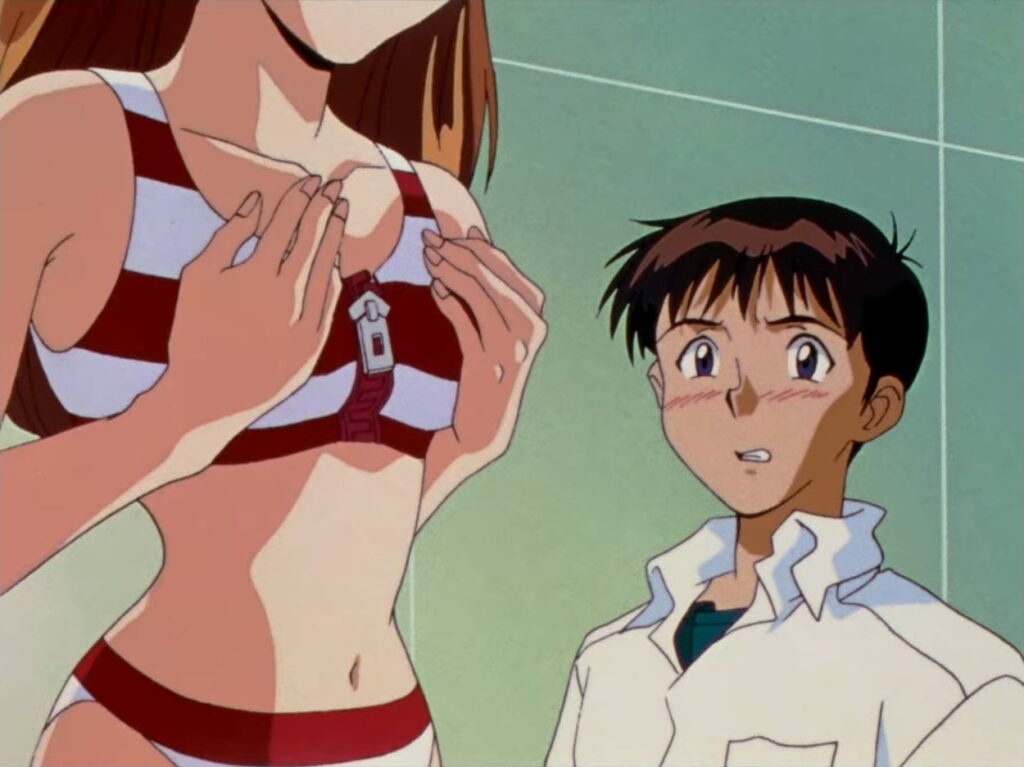 I know that even suggesting that ‘Magma Diver’ might be a good Neon Genesis Evangelion episode paints a massive target on my back. As far as I understand it, episode 10 is hated by certain sections of the fanbase for its fanservice, as well as its silly plotline. However, it would be difficult to argue that it isn’t well put together, regardless of tone or content.

The recurring motif or idea present in Neon Genesis Evangelion episode 10 is ‘thermal expansion.’ First introduced to us through the pool scene where Asuka helps Shinji with his homework and then ponders whether the same concept could be applied to her breasts, this is obviously a good opportunity for fanservice (promised to us at the end of each episode by Misato, after all) but is also threaded throughout the episode well: it is ultimately this concept which allows Asuka to defeat the Angel Sandalphon by cutting her Eva’s coolant hose. So, it’s hardly thoughtless.

What’s more, sexuality has always been a big part of Asuka’s character. ‘Magma Diver’ starts out with a scene showing Asuka shopping for a swimsuit with Kaji, which is another reminder that she wants to steal him away from Misato. Ultimately, she sees in him a way for her to ‘grow up’ and ‘become independent,’ thus avoiding the fear of being abandoned once again as burned into her brain by her mother’s suicide. Seduction and sexuality play a part in this, and in her strained relationship with Shinji.

The Angel battle itself is unique as it takes place in an environment where there is very little movement. This is something which also makes the climax of the next episode, ‘In the Still Moonlight,’ very exciting, but here it is even more pronounced: one wrong move and Asuka will be crushed by the heat and pressure of the volcano, resulting in a very tense clash.

‘Magma Diver’ isn’t the most loved Neon Genesis Evangelion episode, but it does get a bad rap. Personally, I’ve never understood half of the complaints: perhaps it’s because I relate entirely to Shinji, especially the part at the very end where he listens excitedly to the playful cries of Asuka and Misato next door as they tease each other. ‘I expanded down there.’ Indeed!

In the Still Moonlight: A Real Tour de Force 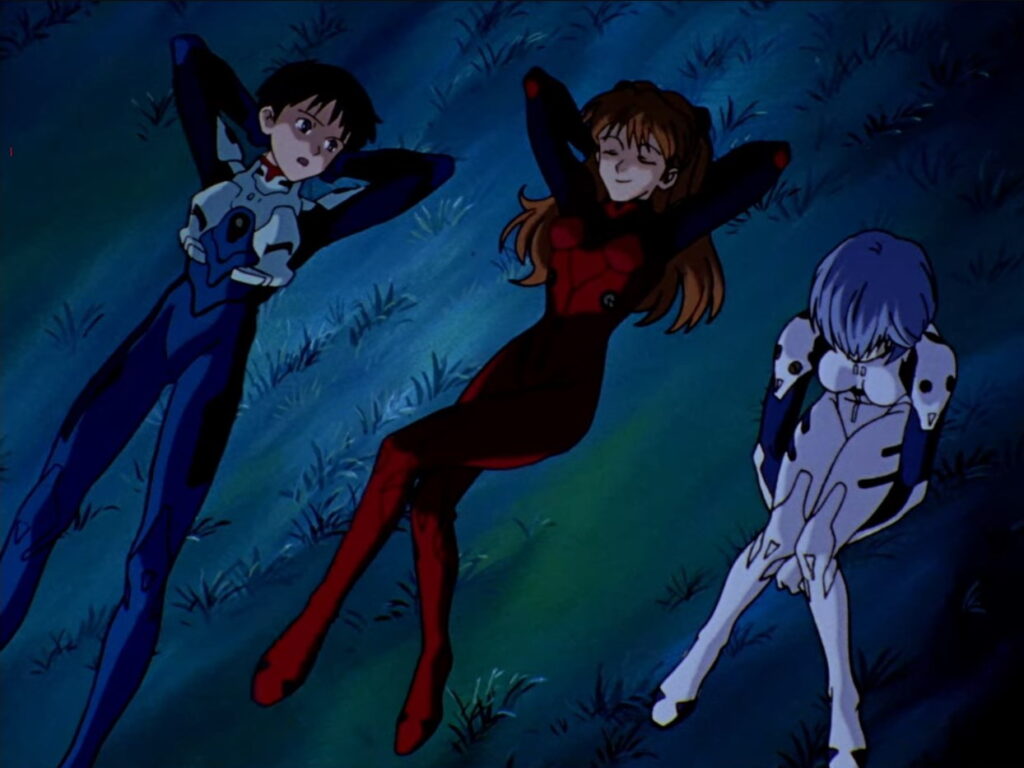 That being said, ‘Magma Diver’ doesn’t really have much of an appearance from Rei. The most we get to see of her is at the beginning of the Angel retrieval mission, alongside a shot of her swimming in the Geofront. That would appear to contradict the statement that these three stories are the most ‘full’ episodic Evangelion episodes, but Neon Genesis Evangelion episode 11 more than makes up for it: here, we get to see the entire trio working together, albeit with much bickering and egos clashing. It also lays the basis for the infamous elevator scene later on in episode 22, through the conflict between Rei and Asuka.

Ever since the beginning of the series, the Geofront and Tokyo-3 have been described as a ‘city of science.’ Yet, the problem with a city like that (like all modern cities) is that it runs entirely on electricity. Take out the generators, therefore, and everything grinds to a halt. ‘In the Still Moonlight’ takes this unfortunate consequence of modern life and explores it magnificently, making it into, possibly, my favorite episode.

We first get a taste of how reliant Tokyo-3 is on electricity with a rare opening. For once, it’s not focused on any of the Eva pilots, but the supporting Nerv staff Ritsuko, Maya, and Aoba, who have an awkward encounter with Vice Commander Fuyutsuki on the train after picking up their laundry; two things which are impossible, at least in the modern sense, without power. Kaji then runs for the elevator with Misato inside it, setting up for the hilarious situation that is threaded throughout the entire episode.

When the Ninth Angel Matarael takes out Geofront’s electricity, we don’t even really see the full extent of the damage. Our perspective instead shifts to Shinji, who is on the phone with his father before the call cuts out. Like Shinji, we think that he’s just being rude (not exactly out of character for Gendo) but the situation quickly turns out to be far more serious. The JSSDF identifies an Angel, but can’t get in contact with Nerv or the Geofront because of the blackout: there is an element of dramatic irony here as we know what is coming, but the characters don’t.

Thus begins Shinji, Rei, and Asuka’s more hands-on, manual journey to the Geofront. In getting rid of the electricity, Neon Genesis Evangelion forces us to consider the geography of Tokyo-3 in a way we never have before: while the question ‘how does Shinji get to the Geofront?’ probably never cropped up in our minds before, here we are strung along with the characters as they are forced to find an alternative. This helps cement the complex as probably one of the most iconic and memorable settings in anime of all time.

Of course, the main draw of Neon Genesis Evangelion episode 11 is undoubtedly the conflict between Asuka and Rei. Immediately upon realizing the emergency situation, Asuka says that they need to decide on a ‘group leader,’ for which she obviously proposes herself, despite the fact that she actually has no idea where she is going. This leads to her being upstaged multiple times by Rei, who does: this only increases her irritation, which was already present due to her fundamental personality differences with the First Children.

To be honest, there’s so much to ‘In the Still Moonlight’ that it deserves its own full analysis. Barely covered here is the effect that being trapped in the same elevator for several hours has on Misato and Kaji’s reignited relationship, alongside how Hyuga commandeers a politician’s loudspeaker van to warn everyone that an Angel is coming (again, foreshadowed brilliantly by Fuyutsuki’s earlier comment that while elections take place, all decisions are taken in Tokyo-3 by the Magi). There’s also the hilarious moment where Ritsuko and Maya are impressed at how well Gendo and the Vice Commander are taking the heat, before it is revealed that Gendo has his feet in some water.

Appearances can, sometimes, be deceiving.

What I hope this piece achieves is to remind you how good Neon Genesis Evangelion is… not just as a more introspective, philosophical show, but also a mecha one. There’s a reason why it is arguably the greatest anime ever made: it is both thrilling and thought-provoking.

To be honest, Evangelion’s inherent watchability is what I always find myself impressed and surprised by whenever I rewatch the show, including this time around. This is probably because The End of Evangelion changed the conversation surrounding it so much. This isn’t something that is often captured in the Rebuild movies, because of their theatrical movie format.

You can watch Neon Genesis Evangelion via Netflix. Make sure to if you haven’t already.