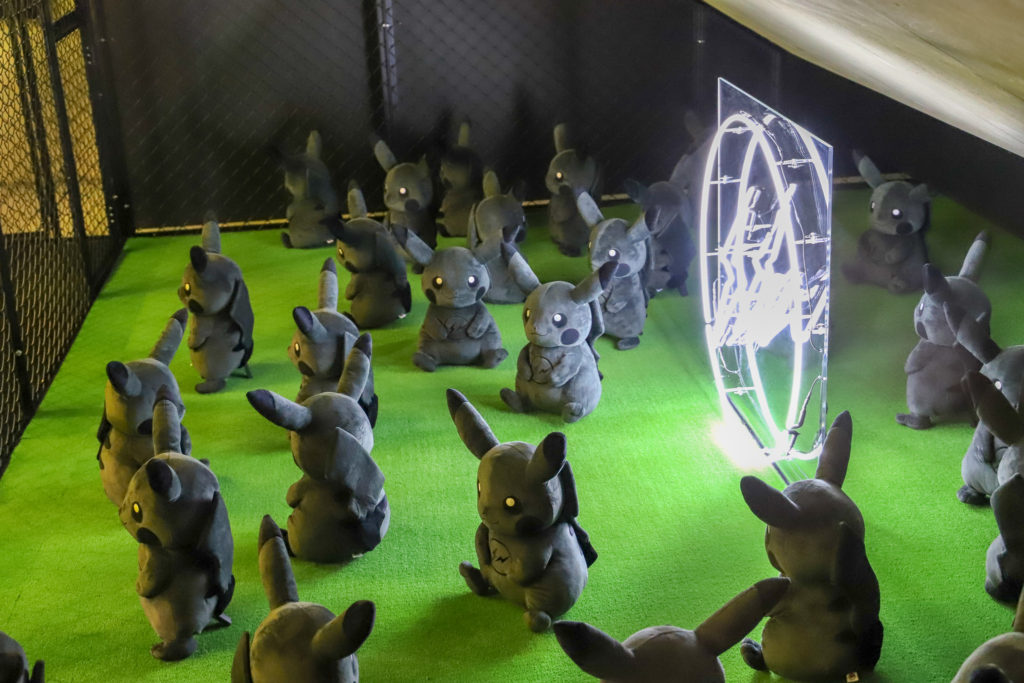 In our interview with iconic designer Hiroshi Fujiwara he mentioned that his collaboration project with Pokémon, THUNDERBOLT PROJECT, would be ongoing for 2 years with multiple collections being released. After the initial launch at HYPEFEST in New York last October, and shortly afterward in Ginza, we’re seeing the fruits of that statement with another collection of new items coming to Dover Street Market locations around the globe. Starting in Ginza (once again) the new collection debuts on April 6th!

While a handful of Pokémon featured in previous drops are making a comeback this time, we’re getting at least one new face thrown into the mix with others gracing different apparel types for the first time. Gengar features prominently on a t-shirt with reflective elements incorporated into the design, we’re guessing his eyes and teeth, but can’t tell from the preview image. Mew & Pikachu are getting new shirts with the simple breast pocket area print and a color-coded FRAGMENT logo placement on the back. And Eevee is finally making the jump to an adult-size tee with a new greyscale design similar to the Mew shirt from the first drop.

The Plush Everybody Wants

Also notable for this drop is the inclusion of a mascot charm of the elusive FRAGMENT Pikachu plush that has been seen (but not available for purchase) at previous events. It might not be exactly what everyone has been clamoring for, but it’s not a bad consolation prize. At least this way you can carry it with you everywhere! This item is thankfully not exclusive to the Dover Street Market drop either, so there will be a chance to get one again in the future.

You’re Gonna Want To Get Your Camping Gear Ready

Every THUNDERBOLT PROJECT drop to date has seen a massive response. I’ve been fortunate enough to make both of the in-store releases so far, but even still I was stuck waiting several hours each time to make my purchases. I’ve lucked out and gotten what I want both times, but given the worldwide nature of this drop and the size of each market the collection is hitting this time, you’re probably going to want to camp. I should be in Los Angeles myself for the time of this next release, so hopefully, I can keep my streak going of hitting each drop in person. I called the Los Angeles Dover Street Market location to ask for more info on the date/time of the release but they were unable to share any of that info just yet. The THUNDERBOLT PROJECT Instagram page mentioned that the other locations outside of Ginza will be participating at the end of April, so I’m sure info will be coming soon. Maybe I’ll see you in line!

THUNDERBOLT PROJECT will release new items at all DOVER STREET MARKET(DSM) stores. Presale at Ginza,Tokyo on saturday, April 6. This time, there will not only be DSM exclusive items such as T-shirts and hoodies, but after many inquiries, we will be selling the THUNDERBOLT PROJECT Original Pikachu Mascot*（a smaller version of a Pikachu plush exhibited in HYPEFEST @hypefest and THE CONVENI @theconveni POP UP STORE）for the first time worldwide.  *Pikachu Mascot is not a DSM exclusive item. Pikachu stuffed toy is not on sale. *Item line-up such as T-shirts or hoodies depends on a store in London, Ginza, New York, Los Angeles, Singapore, Beijing. More details on products and sales information at DSM GINZA will be provided at a later date on the DSM GINZA website( https://ginza.doverstreetmarket.com/new-items ) or the THUNDERBOLT PROJECT Official Instagram. ■ List of Participating Stores All DOVER STREET MARKET Locations ・DSM GINZA: April-6 (Sat) 11:00〜 *A lottery will be held on the website of DSM GINZA to determine customers entering DSM GINZA in Tokyo on April-6. More details will be announced on their website soon. *DSM GINZA will star to sell items online on Saturday, April-6 at 11:00 am (Tokyo), too. https://ginza.doverstreetmarket.com/new-items. ・London, New York, Los Angeles, Singapore, Beijing are scheduled to host this event in late April. For how to enter and other details, please contact the individual store. #thunderbolt_project #tb_project #hiroshifujiwara #藤原ヒロシ #fragmentdesign #fragment #pokemon #ポケモン #doverstreetmarket #doverstreetmarketginza #dsm #dsmg