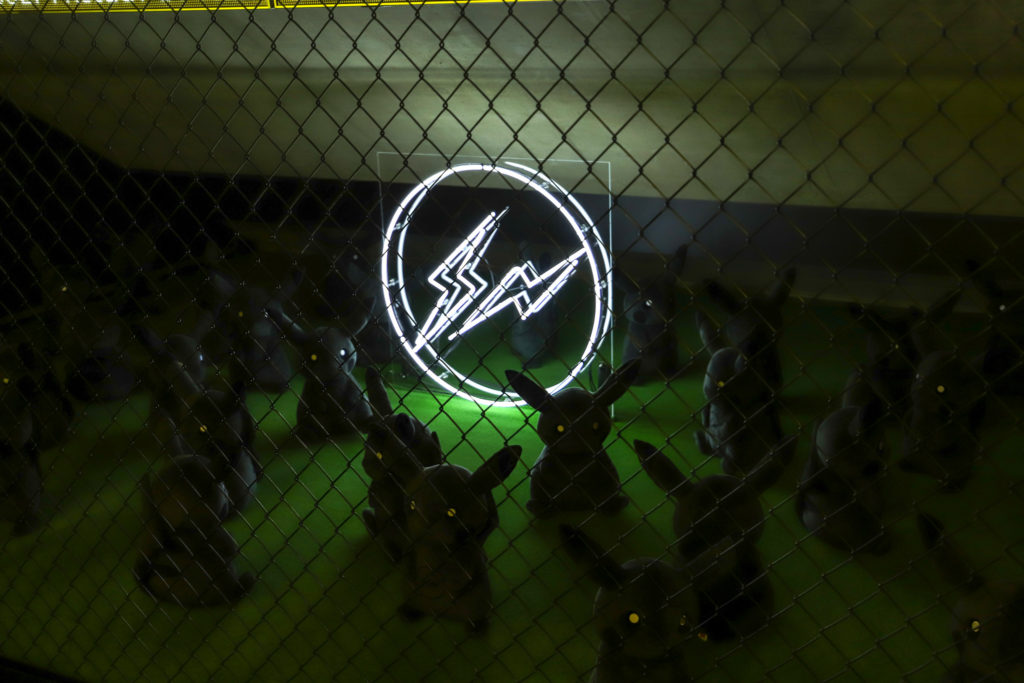 This past weekend Hiroshi Fujiwara & The Pokemon Company opened their first dedicated popup shop for the THUNDERBOLT PROJECT collaboration, and we were on hand at preview night to get a look at everything before it all sold out! The event was held at Sony Ginza Park, a shopping & art collaboration complex just off of the Ginza subway line, and the home to previous concept projects by Fujiwara. It’s being housed in the same area as his currently running “THE CONVENI” project, with a corner area dedicated to the THUNDERBOLT PROJECT popup itself.

As we walked in staff warned us that a caged off area behind the stairs had been taken over by wild Pokemon. Inside the cage (which is located behind what looks to be a checkout counter for the popup but wasn’t in service during the event) there was a bunch of the black colored Pikachu plush made for the popup alongside a neon light with the iconic Fragment Design logo. Purchases during preview night were being handled outside of THE CONVENI, but this area themed for the popup had an incredibly clean look that suits the collaboration perfectly. As I got in line to check out and purchase some of the goods, the staff started looping us around the venue as the line grew to an unexpected size. I can’t really speak to the amount of stock that was made available during the preview night, but it seemed like everyone in attendance picked up at least one item. I managed to snag a couple of shirts I missed out on at HYPEFEST, along with 2 new shirts that debuted at the popup. Attendees were also given the promotional bag that was distributed at HYPEFEST while waiting in line, which was a nice bonus since I had just barely missed getting one when I was in New York for that event.

The popup itself was a ticketed event for the weekend due to worries of demand outpacing supply. Unfortunately, it doesn’t seem like the tickets alleviated those problems as the official Instagram account for the event had posted on Saturday that they were nearly out of stock and closing on Sunday for maintenance. It hasn’t been said how they’re handling those who had tickets for Sunday to enter, but earlier today it was announced that they will be opening up an online shop that will run concurrently with the popup to help with capacity & availability concerns.

I’m personally not very surprised by the turnout & scenario as it exists. Items at HYPEFEST were sold out within an hour and commanding very high prices on eBay shortly thereafter. When an iconic designer meets a monolithic brand, these kinds of things are bound to happen. Pokemon fans count in the millions (as evidenced by the recent Let’s Go sales figures), so adding that to the demand commanded by FRAGMENT DESIGN’s existing audience and I don’t think anyone could truly be prepared for the hype that follows.

In our interview with Fujiwara he did make mention that this collaboration will be running for a period of 2 years with many different designs planned over that period of time. That being the case, it’s pretty realistic to think that fans will be able to get their hands on at least a few items throughout the timespan. Pokemon is also a global property, so that should also play into availability a bit as time goes on. Of course, we’ll be keeping a very watchful eye on this amazing collection as it continues to unfold and we’ll be sure to report any updates as they happen!