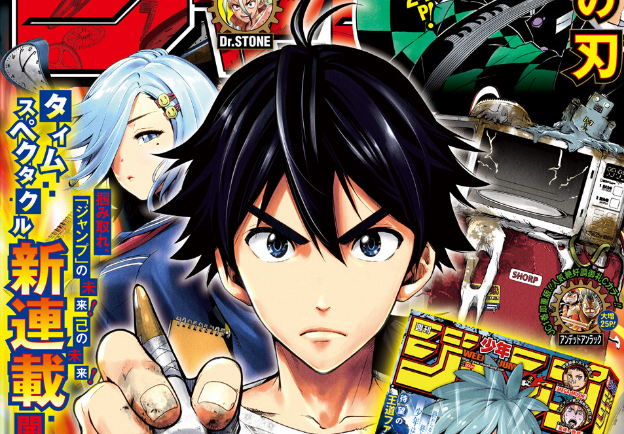 Hello there and welcome to Your Manga Week. Finding time to keep up with all the manga that releases on a weekly basis can be difficult, so I’m here to tell you what’s worth your time and what’s not. We’ll also be discussing the story and arc developments as they come. This week, we’re talking Time Paradox Ghostwriter chapter 1, Undead Unluck chapter 16, and Mission: Yozakura Family chapter 35.

We’re finally back on a weekly schedule! Although Weekly Shonen Jump isn’t ruling out further delays just yet, it seems like things are relatively back to normal in the manga world. The end of Kimetsu no Yaiba and the massive demand for this week’s issue in Japanese stores, in turn, seems to signal that people’s appetite for the medium hasn’t been affected one bit by the current situation. Does this spell good frontiers for Time Paradox Ghostwriter, which launched its first chapter this week? I sure hope so.

The series that have launched so far in this latest round of Shonen Jump reshuffles have been a real mixed bag. On the one hand, we have Tomohiro Hasegawa’s Moriking, which has managed to squeeze a couple of laughs out of me while still flirting with the idea of becoming a battle manga. On the other hand, we have Jun Kirarazaka’s Bone Collection, which didn’t impress me with its hodge-podge of ideas upon its launch and continued to disappoint this week with its ugly art and equally ugly humor.

Enter Time Paradox Ghostwriter chapter 1. Penned by Kenji Ichima and drawn by Tsunehiro Date, it is immediately more engaging than any of the others by virtue of its premise: Teppei Sasaki, a wannabe manga artist down on his luck, is about to give up on his dreams when a copy of Weekly Shonen Jump from the future appears in his microwave.

Copying the series that debuted in that issue ten years in the future, White Knight, he manages to obtain the editor-in-chief’s approval directly and gets himself a serialization in the magazine. But the real creator of White Knight, Itsuki Aino, is out there, somewhere, and she’s not all too happy about someone stealing her idea. What is Itsuki’s next move? Will Sasaki’s plagiarism catch up with him? Furthermore, why on earth is Sasaki’s microwave spitting out Jump issues from the future? There are lots of questions, which is the sure sign of an engaging first chapter. 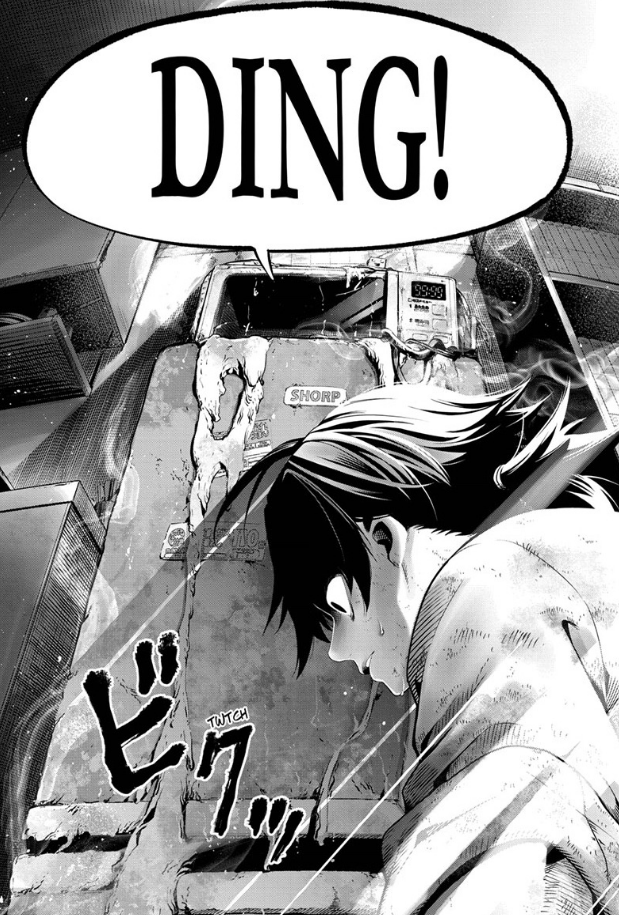 First of all, it may seem unfair to blast Bone Collection for being a hodge-podge of ideas from already-existing series when Time Paradox Ghostwriter itself appears as the unholy love child of Bakuman and Steins;Gate. But there is a charm to these ideas, especially because author Ichima weaponizes the series’ status as a Weekly Shonen Jump series: using its imagery, its ethos, and its edifices – the serialization meeting, the editor-in-chief, the Shueisha office – to invoke a special sort of response in the avid manga reader. Perhaps this isn’t something that will hold true for those who aren’t engaged with the magazine, but it worked for me in much the same way that it did in Bakuman.

In any case, upon reading the synopsis for Time Paradox Ghostwriter chapter 1, you may be forgiven for thinking that it appears to be a little plot-heavy. Indeed, one of the biggest mistakes that new series and authors make is prioritizing world-building and narrative over characters, but the duo seem to have the balance down pat. Running throughout the course of this chapter is the journey of Sasaki, who we see go from rock bottom to high as a kite as his dreams of becoming a mangaka are both dashed and revived along with the narrative. This necessarily creates sympathy for him on the part of the reader – having seen him at his worst, we want him to succeed. 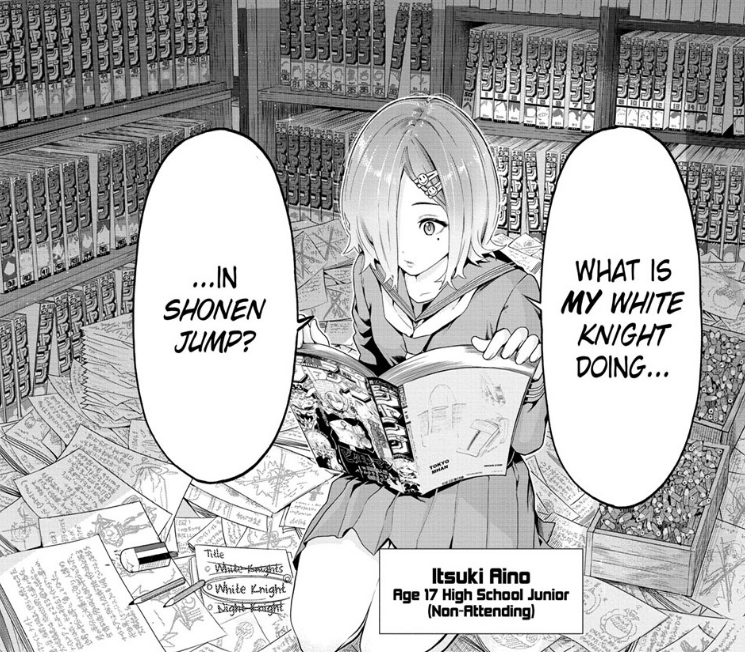 There is also a fascinating contradiction between the reader’s wishing for Sasaki’s success and the way in which he achieves it – through plagiarism. The reveal at the end of Time Paradox Ghostwriter chapter 1 that White Knight’s original creator is on his tail is, in turn, the perfect set-up for the ongoing narrative, as well as Sasaki’s future development – will he give up his newfound success or will he attempt to double down? Sasaki seems like quite a good guy, but you never know what success will do to him.

In this sense, Date and Ichima seem to have avoided the trap of heavy plotting and have instead maintained a strong balance between narrative and character development, which makes me all the more excited to see where Time Paradox Ghostwriter goes next. All in all, this series appears to be the strongest of the bunch, so let’s hope that it stands the test of time.

Another new series that has continued to impress me is Yoshifumi Tozuka’s Undead Unluck. Ever since its bombastic debut, it has continued to build on the inherent charisma of its main characters and the nature of its ‘rule’-based world, all the while delivering fantastic humor and entertaining action. Moreover, Undead Unluck chapter 16 sheds some light on perhaps one of the story’s most pressing mysteries: the identity of Andy, who he was and how he came to be the person he is today.

We already got some hints that Andy was not always Andy as we know him back at the beginning of this arc, as Shen and Izumo chatted on the way to defeat the UMA Spoil. But here, in Undead Unluck chapter 16, it all gets laid on the table. Having asked Shen to remove the card that he keeps in his forehead last week, Andy launches Spoil into space and slowly begins to transform – growing not just a full head of black hair, but also showing off a new set of regenerative powers. 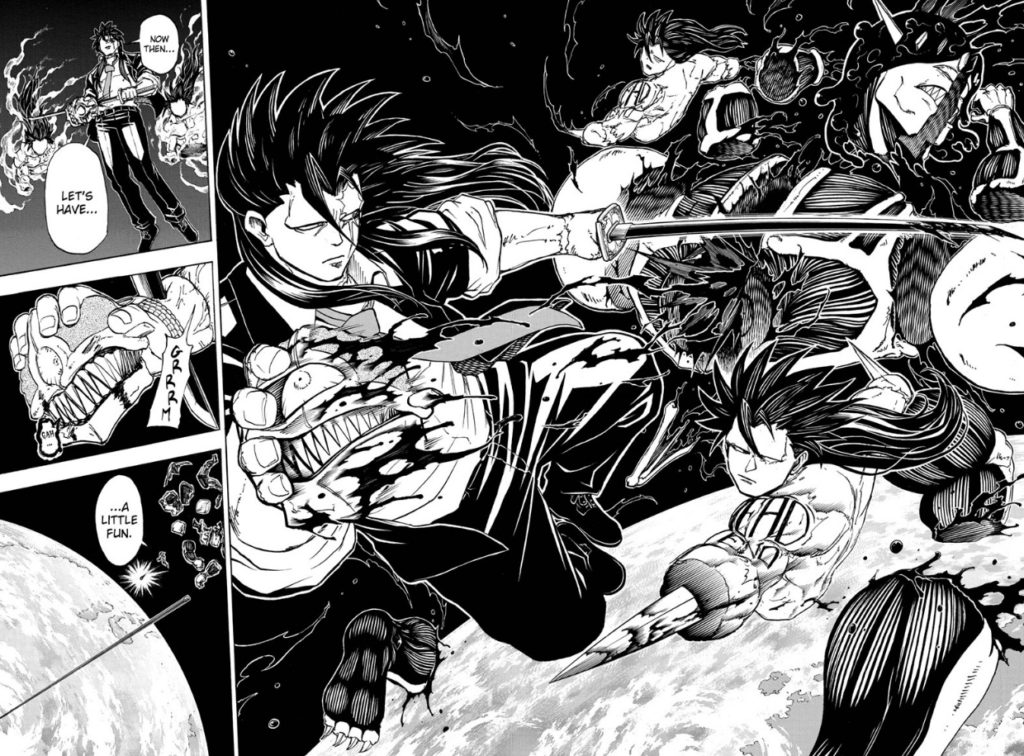 This form of Andy is known as ‘Victor’ – for ‘victory’ – and is seemingly who the wisecracking immortal was before he met Izumo. The card that he keeps in his forehead, in turn, keeps that personality at bay. It quickly becomes apparent why, as he begins to attack both Shen and Izumo with no regards to their powers or ‘Rules’ – he’s a true force to be reckoned with, with no regard for friend or foe.

While there are still several questions that are up in the air, Undead Unluck chapter 16 provides us with enough hints to make at least a couple of good guesses as to who Andy really is. Firstly, it is possible that ‘Victor’ was simply Andy’s personality before he met Izumo, whom he locked away due to some sort of tragic event. But that does not explain why he would immediately attack Shen and Izumo upon return to Earth, so it seems more likely to me that Victor is some sort of vengeful god or fallen angel, which is strengthened by his apparent disregard for the all-powerful ‘Rules’ that govern the series’ power system. 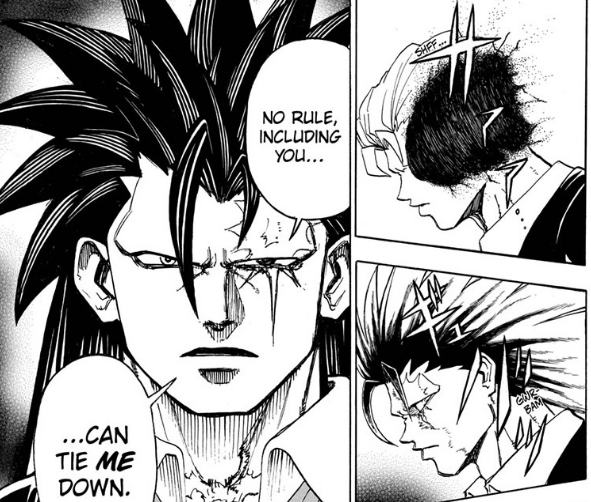 This also makes sense if you look at it within the context of Undead Unluck’s wider world, as detailed back in chapter 9. Tozuka is very clearly going all in with the biblical and apocalyptic imagery, which would make an almighty identity for Andy make sense. In any case, it is clear that the threat that he poses is nothing to be sniffed at, as Shen calls in the entirety of the Union at the end of Undead Unluck chapter 16. It will be interesting to see how the powerful warriors manage to defeat Victor – if they even can.

On a final note, we should look back at this past arc as a whole, which we’ll refer to as the ‘Spoil’ arc after its antagonist. It was crucial for Undead Unluck to stick the landing on this one, as it was our first ‘proper’ taste of the series’ structure going forward. All in all, it was very entertaining – Shen is a great character, and the structure of the battles was easy to follow – but there was a part of me that was disappointed when it evolved into facing off against a giant, black monster at the end. There could have been a climax with a little bit more ingenuity, but Tozuka will no doubt have many more opportunities to improve going forward.

Finally, we come to Mission: Yozakura Family chapter 35. Even though I expressed my enjoyment for the series back when it first launched, it is honestly a surprise to me that Hitsuji Gondaira’s spy series has come this far. Reading the series each week has, in fact, felt like a recurring nightmare, as Gondaira uses and reuses the same ideas with very little development.  It may have its moments of goodness, but on the whole, it has very much stagnated.

Luckily for us, Mission: Yozakura Family chapter 35 is one such moment of goodness. For the first time in a good while, Gondaira’s concept for this chapter isn’t one that has already been used many times prior. More concretely, instead of dealing with yet another obsessive admirer, Taiyo goes to an underground library in search of information on his dead parents. The twist? This is a library where silence is enforced with deadly force. 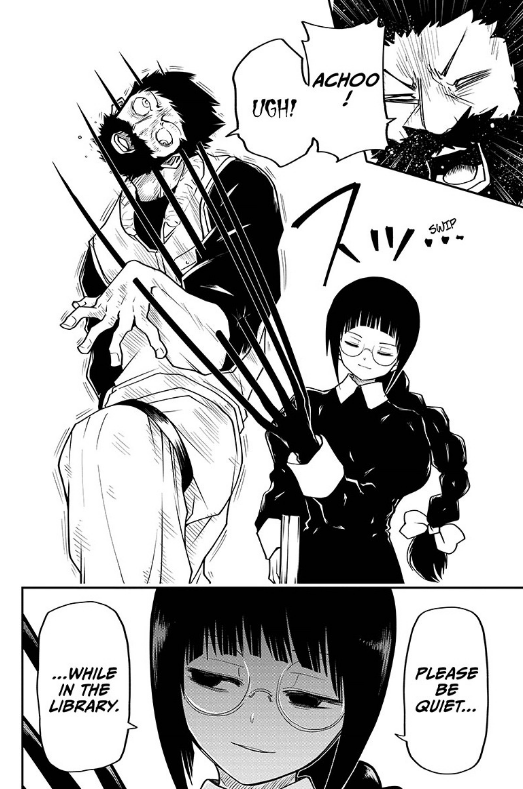 This idea leads to some genuinely entertaining action in Mission: Yozakura Family chapter 35, as Taiyo attempts to outsmart the deadly director Me-chan (see above) while making his way through the depths of the library in search of a certain book. The excitement then peaks when that book explodes, putting Me-chan on Taiyo’s trail with deadly consequences.

The climax of Mission: Yozakura Family chapter 35 then further cements this chapter’s status as one of the series’ best in a while. Instead of simply outrunning Me-chan or facing her down in a fight, Mutsumi uses some lateral thinking and guesses that she might be weak to loud noises, thus shouting into Taiyo’s earpiece to take her out. On the whole, I’d say that Gondaira needs more ideas like this – unique ones, executed well, and with exciting consequences.

One other important aspect to Mission: Yozakura Family chapter 35 is the development that it offers to the overall plot. The mystery surrounding the fate of Taiyo’s family, supposedly passing away in a car crash when he was young, was left dangling in the air after some remarks by a previous antagonist, who also gave Taiyo a mysterious ball that was said to contain some information on the matter.

Taiyo ventures into the Library of the Dead in Mission: Yozakura Family chapter 35 to decode this information, and he finds out this family didn’t pass away due to an accident, after all – they were disposed of by a mysterious being or organization known as ‘Tanpopo,’ which clearly sets up the structure of the coming chapters. 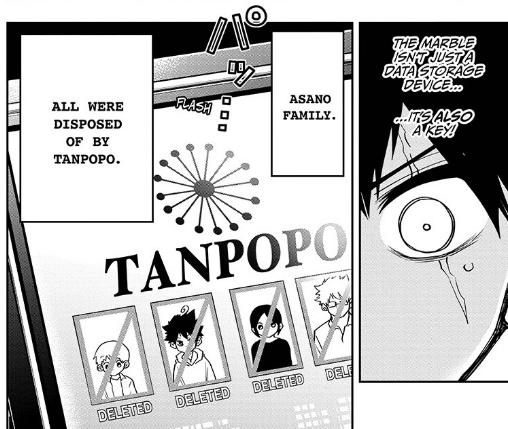 While I said that Gondaira needed to keep developing new, exciting ideas for the series if he wanted it to succeed in the future, this development seems to suggest that the series might not be around for much longer. Resolving the mystery behind the fate of Taiyo’s family certainly feels like an endgame development, upon the conclusion of which Gondaira could quite easily wrap things up. The series isn’t doing amazingly in terms of sales, so it wouldn’t surprise me if this was the direction of travel – whether or not this turns out to be true, however, we’ll just have to wait and see.