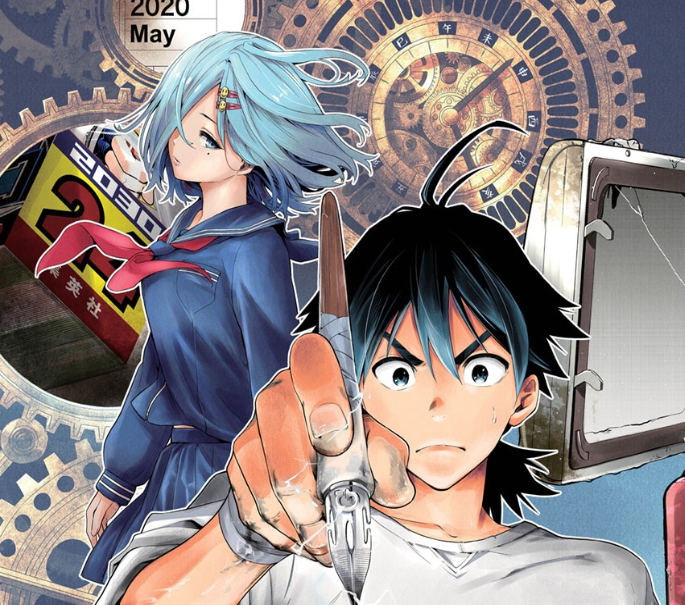 Hello there and welcome to Your Manga Week. Finding time to keep up with all the manga that releases on a weekly basis can be difficult, so I’m here to tell you what’s worth your time and what’s not. We’ll also be discussing the story and arc developments as they come. This week, we’re talking Time Paradox Ghostwriter chapter 10, Chainsaw Man chapter 78, and Me & Roboco chapter 3.

Weekly Shonen Jump is looking a bit empty this week as Haikyu!!’s ending leaves it without a sports manga for the first time ever. That’s a significant development, but one that will no doubt be corrected over the coming weeks and months. In Japan, there’s also a new one shot from KochiKame author Osamu Akimoto – this one focuses on the character Neruo Higurashi as Olympic fever sweeps the titular Katsushika police box. It wasn’t picked up for translation, however, which was to be expected as English publishers have never had that much success in bringing over the long-running series. Still, at least we have this week’s manga to talk about.

In writing about the extraordinary situation that Haikyu!!’s ending has now left Jump in, I touched upon some of the magazine’s other recent attempts to get a successful sports series off the ground. One such attempt was Double Taisei, which launched last year and focused on the world of professional shogi. Perhaps it was because of this, then, that Double Taisei chapter 24 immediately crossed my mind upon finishing reading Time Paradox Ghostwriter chapter 10 – that bizarre chapter was the last time we focused on a series simply because of how unbelievable it had become, and Time Paradox Ghostwriter chapter 10 is no exception.

It is honestly hard to believe that we’ve only had ten installments of Time Paradox Ghostwriter since it debuted back in May. So much has happened in such a short space of time: author Kenji Ichima and Tsunehiro Date have presided over a gripping premise, a surprise stabbing, a message from the future, and visual novel-style character development all in one. In this sense, Time Paradox Ghostwriter chapter 10 is just the icing on the cake – but what an addition it is.

Time Paradox Ghostwriter chapter 10 starts out innocuously enough. We open on an episode from Aino’s past, discovering how she fell in love with manga and why she decided to become a mangaka. The old man that presides over this is definitely Sasaki, judging by his character design, but that tiny detail planted for future development is honestly nothing compared to what comes after. 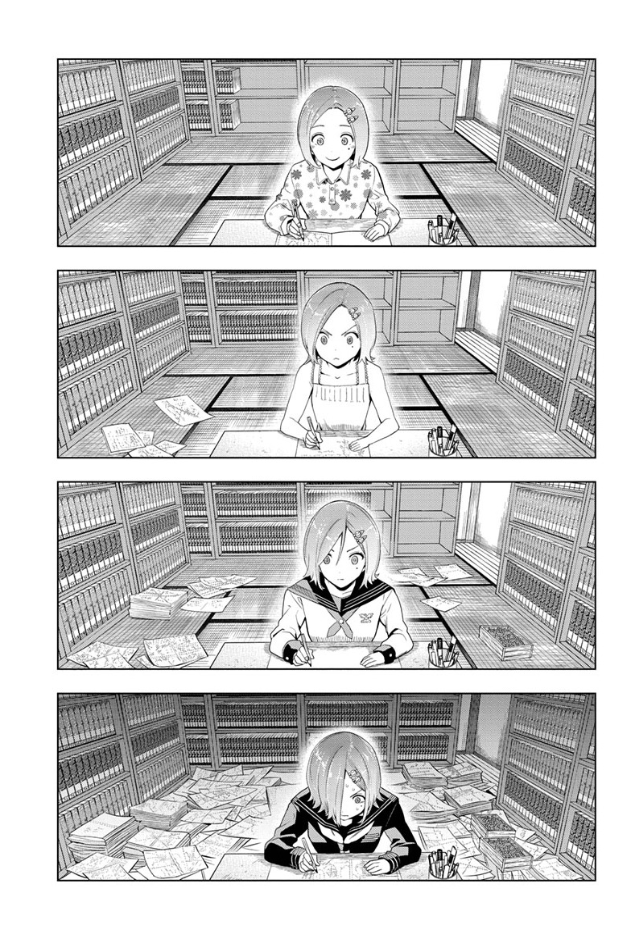 Following this very brief flashback is a flashforward, racing through several years of Aino’s life in a practice that has become all but second nature to the series at this point. We get up to where last week’s chapter left off, with Aino receiving an offer to make Anima into a series, but we also get a little peek into her philosophy along the way. Finally learning what she means by a manga that “everyone can enjoy,” Time Paradox Ghostwriter chapter 10 presents a conflict between the author’s own personality and a series’ potential for mass appeal.

While I don’t necessarily agree with this – in the first place, I don’t believe it is possible to create a piece of art that “everyone” can enjoy – author Ichima does at least provide some something to chew on. Your jaw may be rather tired out, however, once it drops to floor after Time Paradox Ghostwriter chapter 10 delivers its final sucker punch: overworking herself in exactly the same way as Sasaki, Aino collapses to the floor, seemingly disillusioned with her dream and at peace with the world. 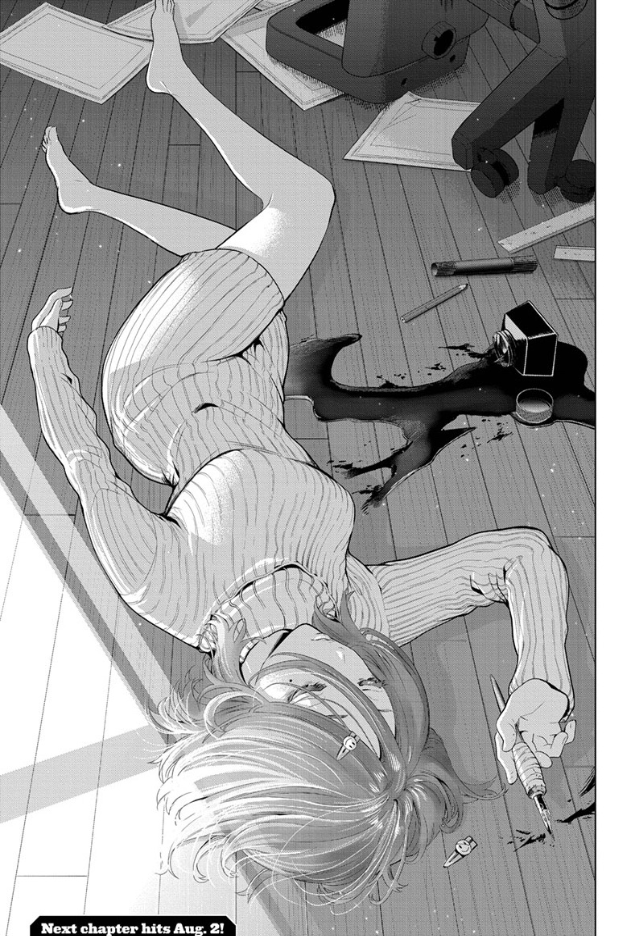 It seems unlikely that Aino is dead, given that the series has used such shock cliffhangers before, but it does remind me of the sort of bonkers imagery that made Double Taisei chapter 23 so memorable. It also reminds me of another chapter earlier in the series, chapter 20, which ended with the implication that one of the supporting characters had killed himself. In much the same vein, I don’t expect Time Paradox Ghostwriter chapter 10 to have many long-term effects, but it certainly does have my attention going into next week.

On a final note, it is also possible that Time Paradox Ghostwriter chapter 10’s shock ending could be an indication that the series is coming to an end some time soon. Killing off one of your main characters at this early stage is never a good sign, and neither is the reliance on cheap cliffhangers. The series has also proved to be very controversial for Weekly Shonen Jump, with some vocal sections of the fanbase expressing their distaste for the series’ treatment of plagiarism – the series’ author, Kenji Ichima, was forced to disable his replies because of the hate. It is possible, then, that Shueisha may cut their losses. We’ll just have to wait and see.

Speaking of unexpected developments, readers of this column will no doubt be keenly aware of my silence on the last couple of chapters of Chainsaw Man. Although I have covered Tatsuki Fujimoto’s series multiple times in the past, not covering the twists and turns of this latest ‘Gun Devil’ arc appears to be a disservice.

Part of the problem is finding where to start. The last few chapters of Chainsaw Man have been so full of high-stakes action, shocking developments, and heartbreaking drama that it ironically becomes quite hard to parse. What’s the point in covering something now if it turns out to be different later on down the line? So while Chainsaw Man chapter 78 is definitely worth talking about, anything I say here should be taken with a massive grain of salt.

First, we should recap what has happened so far since we last checked in with the series. Following a conversation with Aki and the Angel Devil, it was revealed that Makima is, in fact, the ‘Control Devil’ – a Devil that is able to control people and animals, even able to make them enter into contracts. As if that wasn’t enough, the Gun Devil was then summoned by the President of the United States and sent to destroy Makima – ending countless lives in the process. 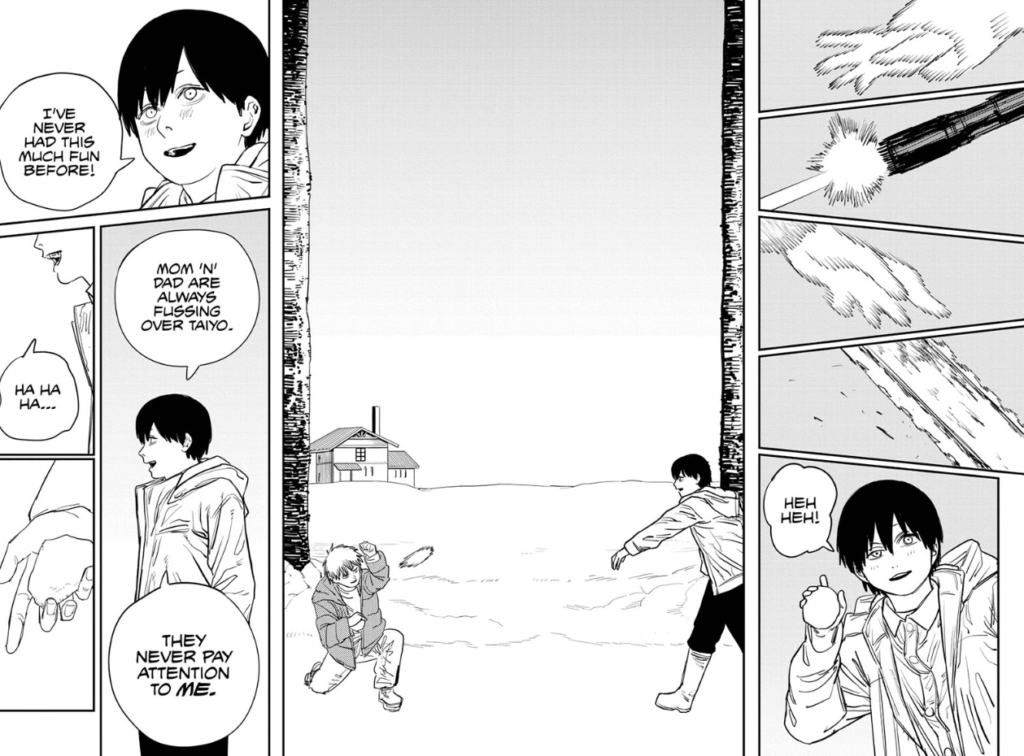 Chainsaw Man chapter 78 opens on a clash between Denji and Aki, who has been taken over by a part of the Gun Devil’s body and transformed into a Fiend. What makes this segment particularly effective is the way that Fujimoto represents what is going on in Aki’s mind: he thinks that he’s in a snowball fight with Denji, living out his childhood dreams of being noticed and having fun. In reality, he’s destroying his only family and ending civilian lives in the process.

In this sense, Fujimoto shows that he can do not only surprising plot developments, but also link them to the characters that we know and love. Chainsaw Man chapter 78 is effective not only because we want to know how the fight against the Gun Devil turns out, but also because we care about what happens to Denji, Power, and Aki – if that wasn’t the case, then I doubt the Chainsaw Man subreddit would have changed their online user counter to “suffering with Aki.”

The lesson of tying plot developments to character relationships is one that all rookies entering into Weekly Shonen Jump would do well to learn. That is why a lot of last year’s sports series failed, along with such series as Guardian of the Witch and Zipman!!. As if that wasn’t enough, Chainsaw Man chapter 78 then rounds off with a tantalizing cliffhanger: Denji lays on the ground, lifeless and bloody. 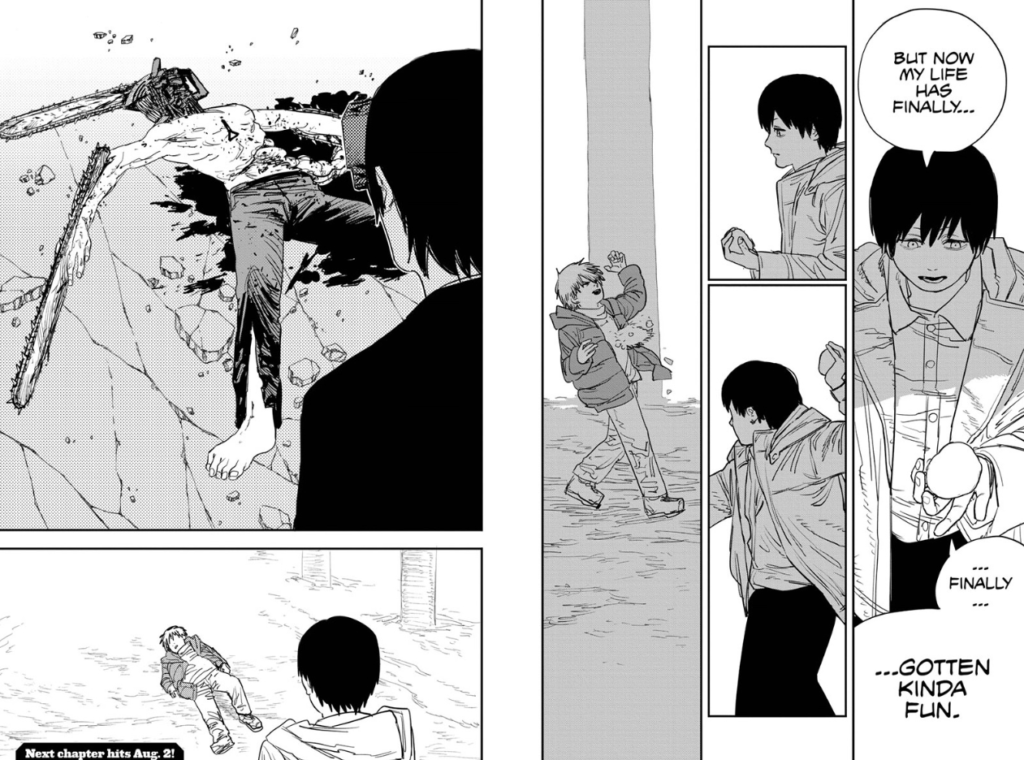 Whether or not Aki managed to kill him is an open question, but I certainly wouldn’t rule it out. I have honestly no idea what is going on in Chainsaw Man right now – and I love it.

Finally, we come to Me & Roboco chapter 3. This new comedy series launched at the beginning of this month among a glut of other comedy series, making it yet another silly story in a sea of silly stories. The fact that its first chapter wasn’t all that funny, then, didn’t do it any favors either. Yet, reception to the series has been positive online, and Me & Roboco chapter 3 was the first chapter to help me realize at least some of why. It may be achieving success, but whether or not it will stick around is another matter entirely.

What first got me on board with Me & Roboco chapter 3 was an Act-Age reference. The dysfunctional robot maid Roboco, landing at Bondo’s school during disaster-preparedness week, loudly declares “I’m Kei Yonagi’ while doing a curtsey that reveals a little too much of her lower half. The fact that I am an Act-Age fan is probably well known at this point, so it was hard for me not to immediately cut Me & Roboco chapter 3 some slack.

That slack only loosened as Me & Roboco chapter 3 made more and more real-life references. Immediately after landing at Bondo’s school, Roboco asks her owner to push her “Roboco button,” which dispenses a Family Mart chicken tender. Much like every foreigner who has ever lived in Japan, Strong Zero and ‘Famichiki’ formed a key part of my diet, so this immediately brought back good memories and a smile to my face. Later on, there are also some gags involving grotesque character designs, which seem to me to be at least somewhat inspired by Nobuyuki Fukumoto’s iconic art style.

The later portion of Me & Roboco chapter 3 also introduces an interesting new character. Madoka is initially presented as Bondo’s cutesy love interest, but quickly turns out to have a hidden side to her personality: Mad, the “Queen of Board Games,” who destroys other players in online matches but was banned from playing by her mom because her personality undergoes a drastic transformation.

It’s interesting to see Me & Roboco subvert traditional expectations in this sense, if only a little bit, as we would expect Madoka to become a recurring love interest for Bondo throughout the series. That may still turn out to be the case, but at least now we know that there’s something a little more interesting to her personality: the transforming gambler, whose dramatic presence made me laugh more than a couple of times. 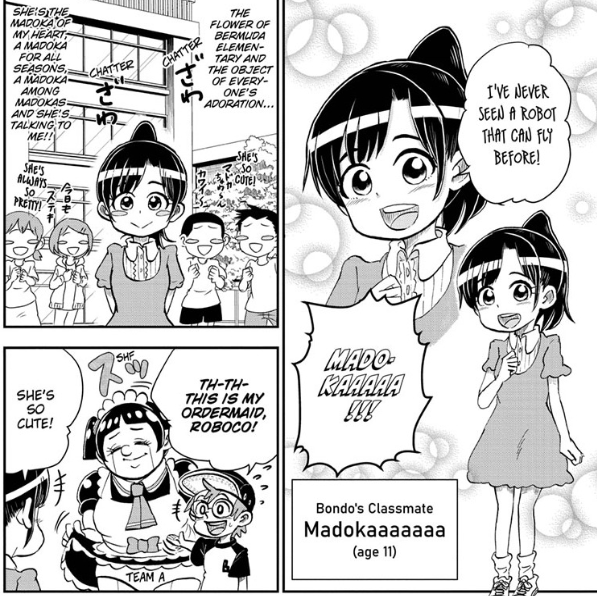 As a result, Me & Roboco chapter 3 has made me reevaluate my thoughts on the series somewhat. I’m still a little uncomfortable with the way that Shuhei Miyazaki makes Roboco’s masculine appearance the butt of several jokes – only heightened by the constant inclusion of multiple ‘normal’-looking, cutesy maids – but there is no denying that several gags managed to break through for me in Me & Roboco chapter 3. That being said, it remains to be seen if Miyazaki can repeat this success.

What’s more, any enjoyment that I may have found because of the references ultimately isn’t all that impressive: all Miyazaki is doing is using the popularity of other authors’ works to further his own. At a certain stage, then, things could turn into their opposite and the references could become grating, dragging the series down instead of lifting it up. Here’s hoping chapter 3 forces Me & Roboco to learn the error of its ways, as I fear that cancelation is much more than an idle threat in this current climate.