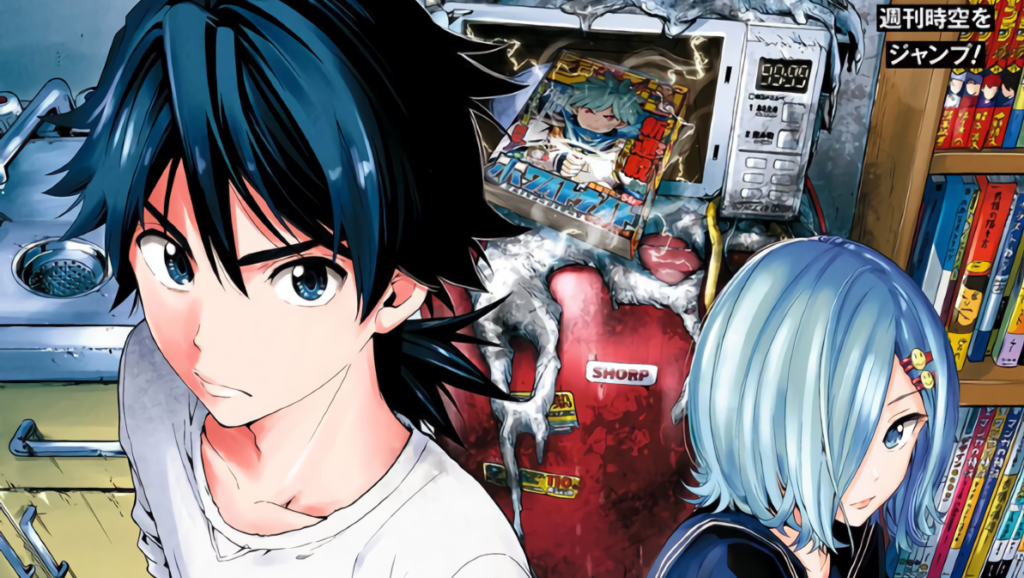 This is because, since day one, Time Paradox Ghostwriter has been a controversial series domestically for Weekly Shonen Jump. The idea of protagonist Sasaki stealing another’s work and passing it off as his own – no matter the reason why – has never sat well with Japanese audiences, as the Amazon reviews show.

As of the time of writing, the customer ratings for Time Paradox Ghostwriter volume 1 sit at 41% 5 star, 34% 1 star, and 10% 2 star respectively. Although 5 stars are in the majority, the difference between that and the lower scores shows that opinion is very much polarised. 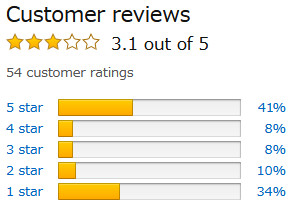 Looking a little closer at the text of the reviews themselves, we get a little indication as to how audience reception played a hand in Time Paradox Ghostwriter’s ending. This 1 star review from “Bude-chan” on August 4 is particularly brutal:

“[Title] Leaves a bad taste in your mouth. Protagonist is nothing but excuses to preserve the series’ interesting concept, setting and philosophy. All of the characters also only exist for his benefit.

Title says it all. Concept and plot is fairly interesting.

One of those time paradox stories where the heroine has to be saved from certain death. You often find these in Jump, but they can be kinda cool.

However, this series ends up wasting this interesting setting with a protagonist full of excuses attempting to justify his actions, and the heroine is only used for plot convenience. The editor is also useless.

An issue of Jump from ten years in the future appears and the protagonist, mistaking it for a dream, publishes it as is in Weekly Shonen Jump. He learns later that this is plagiarism, but figures he has a duty to continue publishing it now that he has put it out into the world…. More like he didn’t want to let the realization that he was plagiarising get in the way of his chance of getting a serialization. Still, he attempts to pass himself off as some sort of Jesus figure, shouldering the knowledge of his sin, and even refuses to use any of the money that he earns from the series. What on earth were the moneylenders who believed in him and lent him money thinking?

And then he goes and makes things even worse by saying that continuing the series that he stole is somehow his “fate.”  How on earth can you like a protagonist who continues to hurt himself while constantly trying to show off just how tortured he is?

The editors and the heroine also just continue to act in a way that is convenient to Sasaki without reproaching him. You have to wonder what the point of mangaka having editors is!

It’s a pity to think that if the author had managed to create a protagonist with one single redeemable quality, then the series might have been alright.”

Ouch. The thing is, such an opinion is fairly representative of the majority: another user from August 4 called it a “nothing manga” while chastising it as “exactly the same kind of ‘empty manga’ that they talk about in the story.”

Clearly, the idea of having Sasaki pass off a story from the future as his own made many readers very uncomfortable. Nevertheless, as the first review shows, this was not the only problem contributing to Time Paradox Ghostwriter’s ending: readers were willing to give it the benefit of the doubt at the beginning due to its interesting premise, but how it developed later on was where things came undone. Closer inspection is, therefore, needed.

The focus of many of the reviews is the characters – particularly the protagonist, Teppei Sasaki. This is surprising as Sasaki appears quite relatable in the series’ opening chapter: in his mid-20s, down on his luck, and struggling to achieve his dreams – that is an archetype that many readers can relate to, and Kaiju No. 8 has recently drawn extensive praise for using exactly the same type of character.

Even so, it all comes down to development. No matter how relatable Sasaki appears at the beginning, without sufficient development this becomes completely meaningless. The problem is that, as the first review says, after a while he quickly becomes a walking excuse for the plot – instead of grappling with the consequences of his plagiarism, he rationalizes it and places himself at the service of the time travel story. That is precisely the opposite of how you craft living, breathing characters – the heart and soul of any good story. 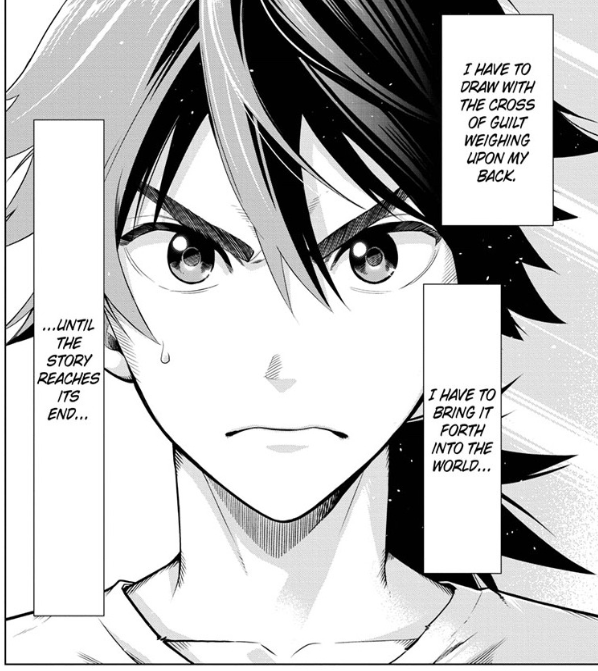 Beyond Sasaki, there are not many characters worth talking about. Even Aino, who is supposed to be the series’ secondary protagonist, turns out to be more of a plot device than anything else: she enjoys no agency outside of Sasaki and finds herself trapped in a fate that she cannot overcome. To a certain extent, we still care about her due to her cute design (Tsunehiro Date’s art is, for the most part, pretty good) but this is once more surface level.

Character development aside, one of Time Paradox Ghostwriter’s biggest draws was undoubtedly its intriguing premise. In this regard, we have to give author Kenji Ichima some credit. Time Paradox Ghostwriter is probably the most interesting idea for a story to come out of Weekly Shonen Jump in quite a while – yet that idea means nothing if you cannot properly put it into practice.

For some reason, Time Paradox Ghostwriter shifts very early on to become a sort of production drama along the lines of Bakuman or Shirobako. This occurs around the end of chapter 4, when Aino becomes Sasaki’s assistant: faced with the shortcomings of his own artistic ability, he is forced to undergo a sort of training arc to match up to the quality of Aino’s White Knight from the future. 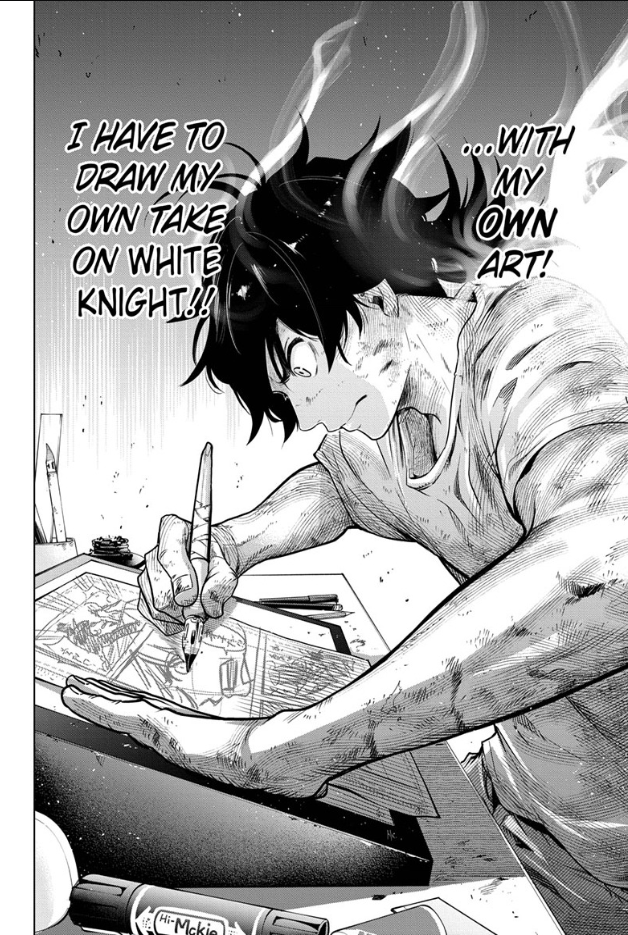 The problem is, this isn’t achieved in a very interesting way. Instead of explaining how Sasaki might improve his artwork, the series simply shows us several scenes of him shouting and supposedly going “beyond his limits” to match up to Aino. Sure, it looks cool, but it is hardly compelling writing once you dig into it.

Perhaps because of how poorly this development was received among the Weekly Shonen Jump readership, Time Paradox Ghostwriter shifted gears very quickly once more. At the end of chapter 7, it introduces some more plot elements, explaining that Sasaki had to beat Aino’s White Knight from the future in order to save her from the fate of death.

At this point, it becomes increasingly hard to see where author Ichima’s shortcomings begin and the threat of cancelation ends. If Ichima had already been told at this point that Time Paradox Ghostwriter was going to be ending – which would not exactly be unsurprising given the poor reception among the readership – then it stands to reasons that he would be forced to develop the plot a little earlier and at a faster rate than he initially expected.

Still, the faults in Ichima’s writing towards the beginning of the series – shifting gears so rapidly and subordinating character development to plot development – make it clear that even if he was given more time, things probably wouldn’t have turned out any better. Furthermore, it would have been because of his own story shortcomings that he was given this notice – the blame lies, therefore, entirely with him and him alone.

A Warning to Weekly Shonen Jump

By the time Time Paradox Ghostwriter’s ending proper had rolled around, many fans were already checked out. Sasaki being trapped in a time loop felt like a rehash of the series’ earlier training arc, and questions such as who was sending the issues of Weekly Shonen Jump from the future were left unanswered. Truly, Time Paradox Ghostwriter had all the hallmarks of a series out of time – quite ironic, given the story’s concept.

Even understanding the series’ faults, however, would not be enough to understand why Time Paradox Ghostwriter met with such a sudden ending. After all, the series’ first volume had been selling better than Moriking, another series that launched around the same time and is still ongoing. In this sense, we need to understand the sheer amount of backlash that the series faced both in the magazine and as a collected volume release – hopefully, this article has helped to explain at least some of that.

For my part, what I hope Time Paradox Ghostwriter’s magnanimous ending doesn’t do is convince Shueisha and Weekly Shonen Jump that time travel stories or series that deal with the implications of plagiarism are a no-go. Time travel can be extremely interesting, constituting some of my favorite stories in fiction, and it is not by shying away from controversial topics that we progress as a society. Rather, it is by discussing them and dissecting them that we truly come to understand ourselves, those around us, and our wider culture.

For now, however, Time Paradox Ghostwriter’s ending stands as an interesting entry in the modern Weekly Shonen Jump canon. It teaches us that through shoddy storytelling and mixed messages, you can provoke a very strong reaction from an audience. Furthermore, it is specifically the idea of plagiarism that really riles up a Japanese audience – exploring why that might be is beyond the scope of this article, but I hope others contribute to the conversation.

Even though it has ended, Time Paradox Ghostwriter will not be forgotten any time soon. It stands as one of Weekly Shonen Jump’s most controversial series in a long time, and could be worth checking out for that very simple reason. Just don’t expect too much.

You can read Time Paradox Ghostwriter for free via VIZ Media’s Shonen Jump.