How Does Time Travel Work in Inuyasha and Hanyo no Yashahime? 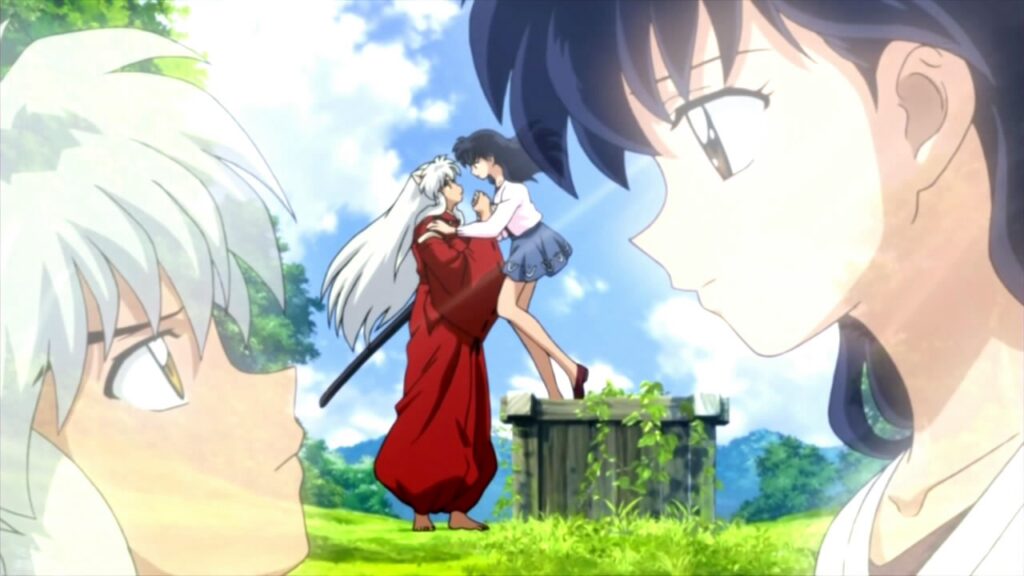 A new Inuyasha spin-off has been announced for later this year. Just like the original, it will involve time travel. Let’s take a look at how time travel operates in the Inuyasha universe — and how it might affect the new show.

Time travel is one of the core elements of the Inuyasha story — without it, there’s no way for Kagome to meet Inuyasha or have her adventures in medieval Japan.  And despite what a certain Time Lord might say, the Inuyasha timeline is not quite as wibbly-wobbly or timey-wimey as you might expect.

In that movie, Marty can spend a week in 1955 and return back to 1985 at the same time that he left.  In fact, he even can adjust the time machine controls a little bit so that he actually returns a few minutes before he left.

In the original series,  every time that Kagome jumped down the Bone-Eater’s Well to travel between modern-day Tokyo and medieval Japan, an equivalent amount of time  would take place on the other side.

For example, if Kagome spent a month in medieval Japan, she would miss a month of school back home (except for school breaks, of course).   It became a running gag — Kagome’s grandfather kept coming up with more and more outlandish reasons for Kagome to be “home sick from school.”

Personally, as a fan of both Back to the Future and Inuyasha, I never thought that it made much sense.  But then again, I don’t have my own magic time travel well, so who am I to judge?

And the well didn’t have any control panels, knobs or dials for Kagome to adjust. It was always set to send her back “500 years in the past.”

Incidentally, the sort of people who like to calculate this kind of stuff have determined that it might actually be closer to “450 years in the past,” and not “500 years” as a lot of the narration states.

The series provides certain historical clues as to when the medieval Japan scenes are supposed to take place.  It was stated from the very beginning that Kagome recognized it as the Sengoku Jidai, or “Warring States Period.” Still, that’s a fairly wide range.

Evidence from the original series — Oda Nobunaga is considered to be a clumsy fool, not a great warlord; and things such as flintlock rifles already exist in Japan — would suggest that the series takes place in roughly 1543-1553. This is about 50 years before Tokugawa Ieyasu would become shogun and close off Japan from the rest of the world.

The series states that Kagome was born in 1982. She had just turned 15 in the first episode.  That corresponds well with the publication of the first volume of the manga in 1997.

Kagome remains a high school student throughout the entire series.  In Japan, high school only lasts for three years.  Although the series aired on Japanese TV from 2000 to 2004, it is reasonable to assume that only three years had passed “in universe.”

The same can be said about Inuyasha: The Final Act, which aired in 2009-2010.  In the final episode of The Final Act, we learn that Kagome has turned 18, that she finally graduated, and that her friends had gone on to college.  At the very end of the series, Kagome marries Inuyasha, and an epilogue explains that she is now living permanently in medieval Japan.

So, what does this mean for the new Inuyasha spin-off series, Hanyo no Yashahime?

The information that we have about the new series says that the main characters — Sesshomaru’s twin daughters, Towa and Setsuna; and Inuyasha and Kagome’s daughter, Moroha —  are all 14 years old.

Apparently, the new series will involve some time travel, as Towa grows up in modern-day Tokyo. It’s not clear if the well is involved at all.

Incidentally, if at least 14 years (probably more) have passed since the end of The Final Act, things would have started to heat up in the real-life historic battles of Sengoku-period Japan.  It would be interesting to see how, or if, this would affect the Hanyo no Yashahime (“Half-Demon Princess”) story in any way.