To Infinity: Why You Should Visit a Yayoi Kusama Installation – OTAQUEST Selects #29 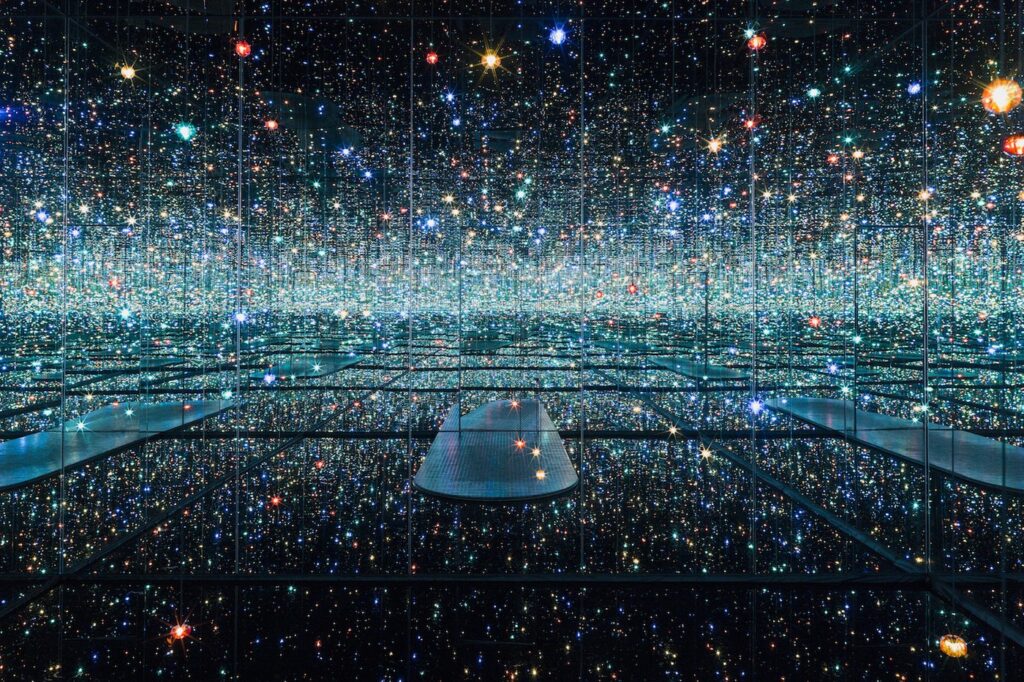 On the corner of a nondescript street in the quiet castle-town of Matsumoto, there lies an art museum with a very non-traditional outer shell. A smattering of bright red polka dots assaulted my senses as I spotted it, immediately recognizable, even if I wasn’t yet intimately familiar with the artist’s name. It conjured a sort of childlike wonder, a frighteningly overpowering feeling of nostalgia, also evoked by the sight of neon Lisa Frank folders and the smell of sidewalk chalk. As the birthplace of now world-renowned pop artist Yayoi Kusama, the boisterous building seemed a proper tribute. Her art is often larger-than-life, kept not to a simple canvas or wall, but enveloping entire rooms, buildings, courtyards. If Kusama’s art is anything, it’s boundless.

In all honesty, there is no escaping her, even if an individual doesn’t have one foot in the art pool. In this modern age of social media and self-promotion, her works have continuously crept into the public consciousness, lighting up our Instagram feed at all times of the night, selfie after selfie taken in a sea of hanging lights and mirrors. Ever hungry for the perfect shot, museum-goers queue for hours to not see, but to experience her works, and to create their own work of art within them. Few, however, know the method behind these bizarre and addicting displays. Yayoi Kusama is not simply another art-world free spirit, and these infinity rooms aren’t figments of her imagination. To Ms. Kusama, they depict something quite real: an entryway into her own hallucinations, an ever-looming specter guiding viewers into the halls of her own (often discussed) mental health.

With a recent announcement that Yayoi Kusama is about to present her largest ever ‘Infinity Mirror Room’ at the Tate Modern in London, there’s no better time to discuss why a trip to see her art should be mandatory, especially after the damning year that was 2020.

Though a person can wander into a Kusama exhibit and utterly enjoy it without a single inkling of the meaning behind each installation, it’s incredible how your lens may change after a brief look at the artist’s arduous and lengthy life and career. During her very early years in which she began to dabble in the arts, Kusama began to experience vivid hallucinations, in which the world around her morphed into flashing lights and endless seas of dots. Her childhood home was often far from happy, with a father whose eyes often wandered to other women, and a mother who took her rages out on her child. This pain chased her to her sketchbook, and eventually, she came to work in a factory during World War II. At only 13 years old, the thin line between the dark realities of the world around her and her desperation for comfort and simplicity came to shape her art. 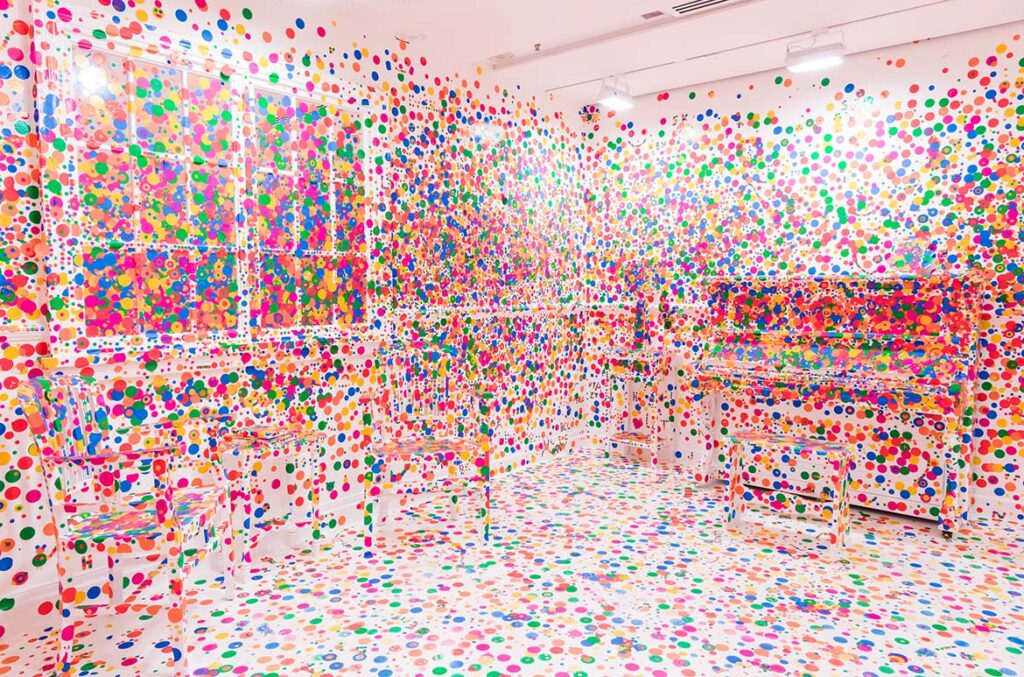 Over time, she surrendered to her frustrations with the conservative Japanese art scene, choosing to move west in the late 50s; a daring move for anyone, let alone an up-and-coming artist from rural Japan. Though she survived off food scraps initially, she pressed on, and quickly became known as a trendsetter in the avant-garde movement, attracting the attentions of famed art critics and curious common folk alike. How could she not be noticed, even today at 91 years old: in each image of her posing with her works, she sports a brightly colored wig, and fashions loud enough to turn heads from a country away.

Originally compared to greats like Jackson Pollock, Kusama was nearly forgotten after leaving New York in the 1980s. In the early 90s, a retrospective at the Center for International Contemporary Arts called her back into the public consciousness. Today, she works still, planning exhibits and expressing herself from the mental care facility she has voluntarily lived in for over 40 years. Poignantly, she has stated that were it not for the arts, she would have killed herself a long, long time ago. In the age of selfie sticks and near self-obsession, it may be easy to see her famed infinity rooms as the perfect backdrop. But it may greatly behoove you to, at first, take a look at them with more deference. After all, you are looking into the very mind of a woman who has given so much to the world. You may as well be inside of her mind.

Pop Art Pop Up: Where to See Kusama’s Works Worldwide

No matter where you live, Yayoi Kusama exhibits tend to make their rounds quite often. In Japan, I’d recommend a scavenger hunt of sorts. While the Matsumoto Museum of Art is the original mecca for Kusama’s works, the lady herself opened a Tokyo museum in 2017, with a perfect balance of massive polka-dot furniture and rooms filled with glowing orbs. Museums, though, aren’t the only places to find her works: on Naoshima Island in Kagawa prefecture, you can find her giant pumpkin sculpture, a yellow mass sitting ever dormant beside the swaying sea. Further south, in Kagoshima, the Kirishima Open-air Museum bringers many of Kusama’s sculptures to mesh seamlessly with nature. A giant nearly neon high heel isn’t something you may expect to find popping out of the ground, but in Kusama’s world, we’ll happily accept it.

For those in the US, Los Angeles has two permanent sites dedicated to Kusama’s works: The Broad, which features two famed Infinity Mirror rooms, and The Marciano Art Foundation, inviting visitors into a red-dotted room with grand tulips spanning from floor to ceiling. On the east coast, the Mattress Factory in Pittsburg also features a permanent collection, while it’s likely that once the world finds more normalcy, exhibits will return to Boston and New York City. (2020 brought her art to both, though for obvious reasons, things didn’t go as planned.) As the Tate Modern has announced its collection, Berlin’s Tiergarten may also feel inspired to extend it’s showing, intended to remain through the spring of this year.

And since traveling isn’t yet on the menu for us, a viewing of Kusama – Infinity on Amazon Prime Video is perfect to tide you over. Stay safe. Once the chance arises, make your way out, and be sure to report back to us.