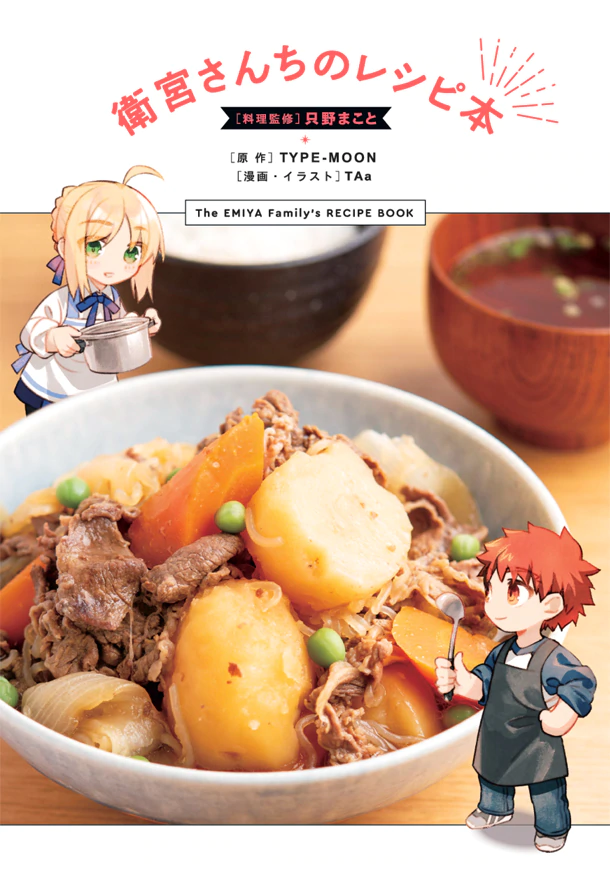 Say what you will about Today’s Menu for the Emiya Family (or as I like to call it, Fate/Stay Dine), but there’s just no denying it: it is capital G Great. And I really mean it, too. Because sometimes I grow weary of the Fate characters’ constant attempts at clawing at each other’s throats to the very bloody, violent end. Sometimes I just want them to sit around and enjoy a nice home-cooked meal.

Now that I’ve gotten that off my chest, I can move on to the real topic at hand. Now that Today’s Menu for the Emiya Family’s sixth volume manga has been out for a few weeks, it’s time we got an inside scoop of what it was like behind the scenes. Comic Natalie conducted an interview with Today’s Menu manga writer TAa and creative supervisor Makoto Tadano to discuss their creative process.

TAa revealed that the manga’s premise came rooted in the idea of Shiro being in the kitchen. A particular moment in Fate/Stay Night involving onigiri inspired TAa to consider Shirou cooking instead of eating, which allowed TAa to come up with his slice of life plot. TAa quickly realized that he needed someone who both had service industry experience and a knack for Fate lore, and found both in Tadano.

For each episode of the anime, Tadano was asked to provide a list of possible dishes to be served. TAa would then use that list to see which dishes could possibly serve as a basis for the episode’s plot. Tadano revealed that the New Year’s Eve soba featured in the anime’s first episode was his favorite, with the shrimp tempura fried to perfection. When asked about the special cookbook included in the manga’s sixth volume, TAa breathed a sigh of relief, knowing that it was bound in Codex. This would allow him to read the cookbook while he’s cooking, as the Codex bounding allows the book to stay in place. TAa also went into detail about the various photos in the cookbook, citing the pictures of yosenabe and chirashi sushi to be his favorites. It pleased Tadano to no end when he learned that people were cooking up his chirashi sushi and uploading photos all over social media.

There’s obviously a lot more to this interview than what we’ve revealed. You can read the interview in its entirety here. The latest volume of Today’s Menu for the Emiya Family, complete with its special cookbook, can be bought on Kadokawa’s website.