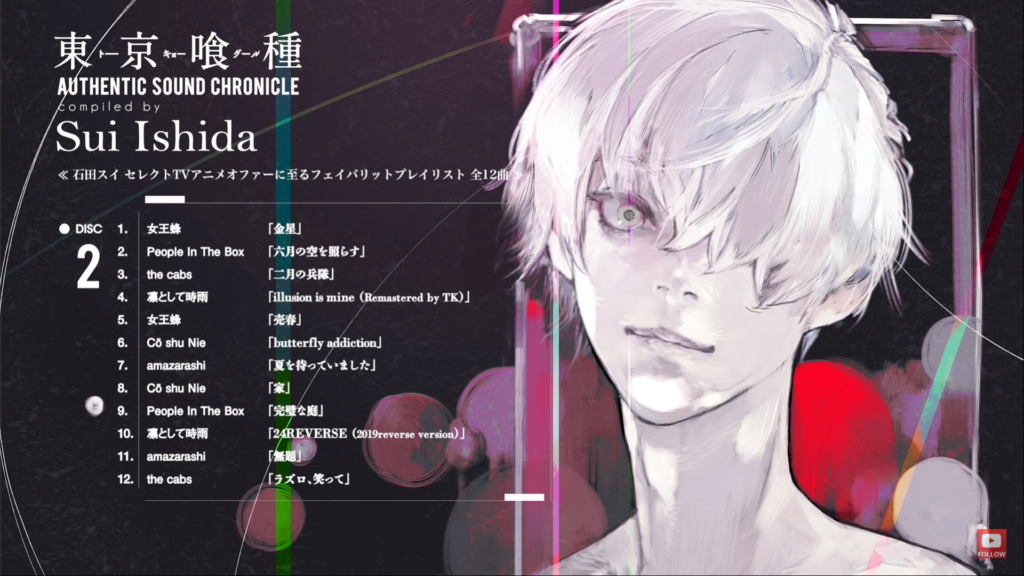 With the Tokyo Ghoul:re manga, as well as the anime for now, finished up, artist Sui Ishida has begun to move on to other things. However, fans of the series should rejoice. Sui Ishida’s handcrafted a compilation album of the anime’s music called “Tokyo Ghoul AUTHENTIC SOUND CHRONICLE”, and if the show specifically clawed its way into your heart the way it did mine, you’ll want to check it out. While it includes the show’s eight opening and endings, what makes this different from a regular compilation album is that it also features new recordings and versions of these songs by their original artists, as well as some remixes.

For instance, Ziyouu-vachi recorded an exclusive acoustic version of Tokyo Ghoul:re’s first ending “HALF” just for this CD. Tokyo Ghoul:re’s second ending “Rakuen No Kimi” also was rerecorded acoustically. A lot of work is going into “Tokyo Ghoul AUTHENTIC SOUND CHRONICLE” and if you’re interested, you’ll want to pick up the first pressing. The first press includes a second disc with a hand-crafted playlist by Tokyo Ghoul creator Sui Ishida featuring songs by artists who worked on the show. These songs inspired Ishida to reach out to the artists themselves to make offers to work on the anime.

That’s one reason Tokyo Ghoul has such incredible music throughout. The manga’s artists specifically requested every artist who ended up getting involved, making sure all the music fit the world he created. Sui Ishida also wrote a commentary for the second disc playlist that will only be available in the first edition. “Tokyo Ghoul AUTHENTIC SOUND CHRONICLE” even features conversations with Ishida and the various musicians, like TK From Ling Tosite Sigure and Amazarashi.

If you don’t want to shell out for the album, Ishida has even created a Spotify playlist featuring some of these songs as well as different tunes from those found on disc 2 of “Tokyo Ghoul AUTHENTIC SOUND CHRONICLE” by the same artists. The CD just released. The limited-edition prices at 4,611 yen and the regular-edition sits at 2,593 yen. Those interested in checking out further information, be sure to head over to the official website.