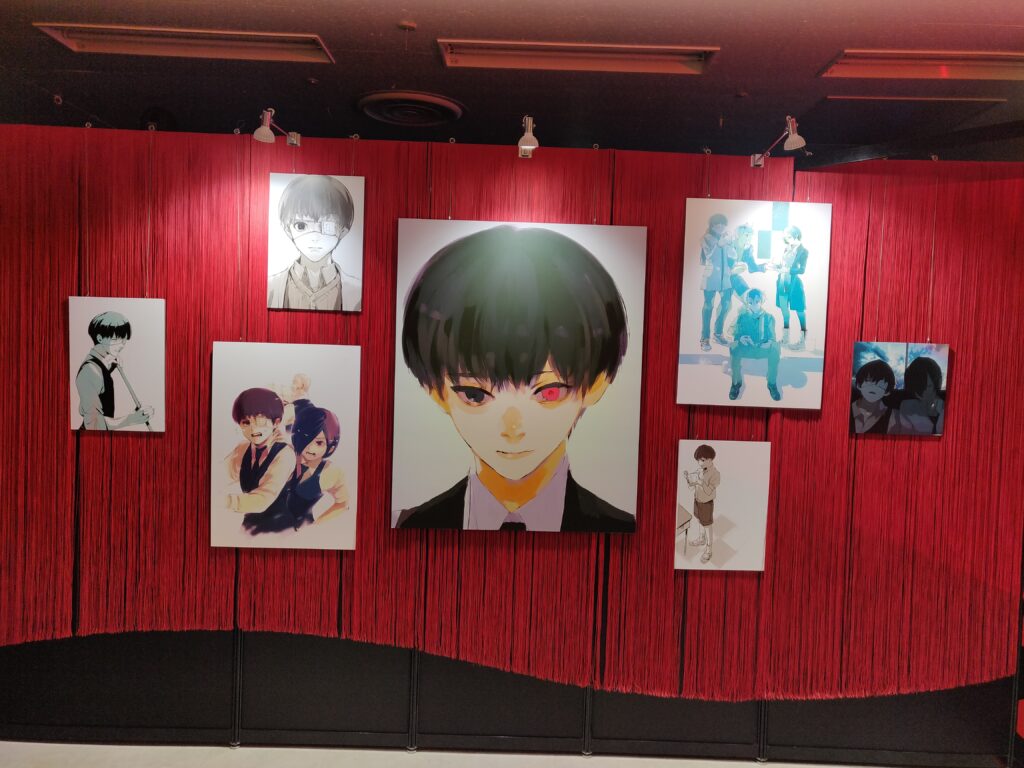 Sui Ishida might only have one big series to their name, but over the course of the last decade, that series ended up twisting and contorting into one of the most sophisticated and breathtaking works to ever come out of manga. Those who wrote off Tokyo Ghoul during or after its initial 15 minutes of fame have missed out on something significant; the grotesquery of Ghoul World became second nature to its millions of fans worldwide through Ishida’s poetic writing and wholely distinct art style, successfully having turned what would have been edginess to high art.

When word came around last year that the first large-scale Tokyo Ghoul exhibition would soon be hitting Tokyo, we knew we had to go. Thankfully, in recent weeks the COVID numbers dropped significantly enough here to be able to do so.

Whether you’re a dyed-in-the-wool Tokyo Ghoul fan or would just want to spend an hour looking at cool art, we can’t imagine the officially titled ‘Sui Ishida Exhibition: Tokyo Ghoul > Jack Jeanne‘ disappointing anyone who walked in.

Even at a steep 2000 yen entry, the selection of pieces, the layout, and the ambiance of the Tokyo Ghoul exhibit really felt tastefully and intentionally chosen. Ishida does 99% of their work digitally, so much of the color pieces you’re seeing are high-resolution prints, though original pages of older hand-drawn one-shots were also on display.

Unfortunately, visitors weren’t allowed to photograph said hand-illustrated art, but also getting to see the evolution from Ishida’s earliest attempts at making manga to the art he employed making Tokyo Ghoul fascinated us.

Unfortunately, like the Sui Ishida’s hand-crafted manga one-shots, the two biggest draws of the Tokyo Ghoul Exhibit also had moderately sized ‘No Photography Signs’ plastered around them: a series of 100 ‘Shikishi’ (autograph boards but for drawings) that featured hand-written answers with accompanying sketches by Ishida to questions sourced from god knows where, and the opening room of the exhibition blasting an exclusive ‘Unravel’ remix by Yorushika.

Said remix is legally streaming on Spotify so track that down, though truthfully it took us some restraint to not start a full-on mosh pit in the socially distanced display room, where dozens of TV monitors flashed hundreds if not thousands of Tokyo Ghoul pieces set to the music. Wouldn’t all art galleries be better with a pit?

The rest of the Tokyo Ghoul Exhibit focused on Jack Jeanne, a Sui Ishida illustrated otome game by Broccoli, originally supposed to have been released already. COVID delays have pushed it back to this month.

The project was first unveiled two years ago, and having written that article it hurts my head to reconcile said fact. Ready to date some Ishida pretty boys, though! Nothing at the exhibition pointed towards the upcoming Sui Ishida manga Chojin X, for which still no one knows much about. With Jack Jeanne out on 18 March, perhaps Ishida is just waiting for that before unleashing his full efforts towards his new project. Either way, we’ll sure to come back for the Chojin X exhibit in 2031.

The Tokyo Ghoul Exhibit runs through 13 March in Ikebukuro.