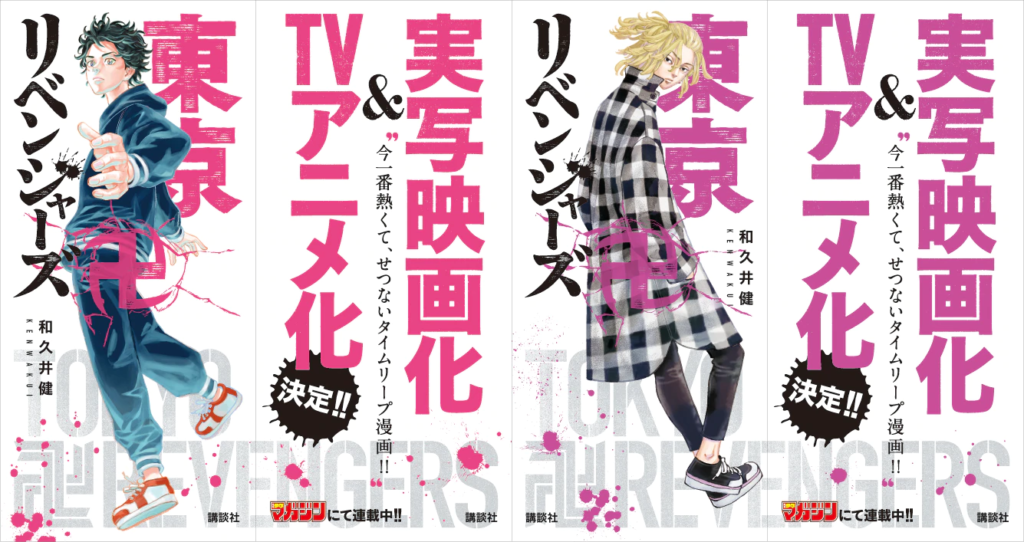 It may surprise you to hear that the Tokyo Revengers live-action film was originally supposed to come out this October. Perhaps it is a good thing, then, that the outbreak of the Coronavirus (COVID-19) pushed it back to next year, as we’ve practically heard nothing about it. That’s all set to change next month, however, as Tokyo Revengers kicks off its first large-scale advertising campaign in Shibuya.

The first ‘phase’ of Tokyo Revenger’s Shibuya campaign has actually already started, consisting of several advertisement ‘pillars’ in Shibuya’s subway station. Featuring many of the series’ most popular characters, these pillars will only remain in place until September 6, so make sure to go check them out while you can.

Next month sees the second phase of Tokyo Revenger’s Shibuya campaign kick off. In collaboration with the Shibuya Tsutaya store, special illustration cards based on the advertisement pillars will be given out at random to anyone who buys one of the series’ collected volumes. In this sense, if you’ve ever thought of picking up Ken Wakui’s original manga, then next month would be the time to do so.

Incidentally, the third and final phase of the Tokyo Revengers Shibuya campaign is all about the original manga. Much like many other series out there, Ken Wakui’s time-travelling delinquent story will be getting a special exhibition from the end of September to the middle of October. This will involve showing off the series’ original manuscripts, as well as any illustrations produced during the serialization thus far.

Going into next month, the lack of information surrounding the two adaptations of Ken Wakui’s manga – a live-action film as well as a TV anime – was a little worrying. Nevertheless, it seems as if this Shibuya campaign is about to kick off a flurry of Tokyo Revengers projects that should, hopefully, build some hype for the upcoming adaptations. If you’re interested in checking the series out, then Kodansha Comics publishes it in English.