The protagonist of shonen manga Tokyo Shinobi Squad stands over a dystopian cityscape. Frowning, he spits: “So much for globalization…” 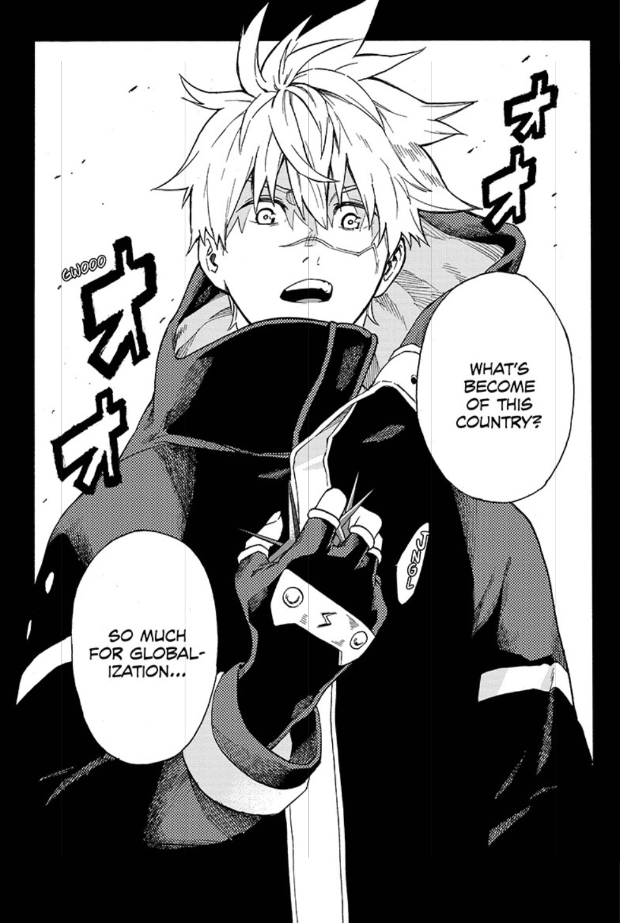 It’s almost surreal to think that, not even a week after the premiere of Trigger’s decisively more upbeat Promare, the latest Weekly Shonen Jump serialization opens with such a statement. According to Tokyo Shinobi Squad, globalization will lead to the descent of society into madness and anarchy – a message which, quite rightfully, worries a lot of people.

Author Yuki Tanaka and artist Kento Matsuura’s Tokyo Shinobi Squad was announced alongside three other series back at the end of April and debuted in this week’s Weekly Shonen Jump. The series follows protagonist Jin Narumi in a dystopian future where law and order have given way to a future Tokyo of crime and mayhem, only saved from total anarchy by superpowered shinobis for hire.

This isn’t exactly a novel science-fiction premise. Yet what sets Tokyo Shinobi Squad apart from many of its peers is its focus on ‘globalization’ as the cause for this dystopian anarchy.

We’re told at the very beginning of the story that the Prime Minister – who looks very much like the incumbent Shinzo Abe, I might add – wanted to bring “every aspect” of Japan up to “international standards,” and therefore constructed a series of giant ‘hyperloops’ connecting Japan directly with Russia, China, and the USA. 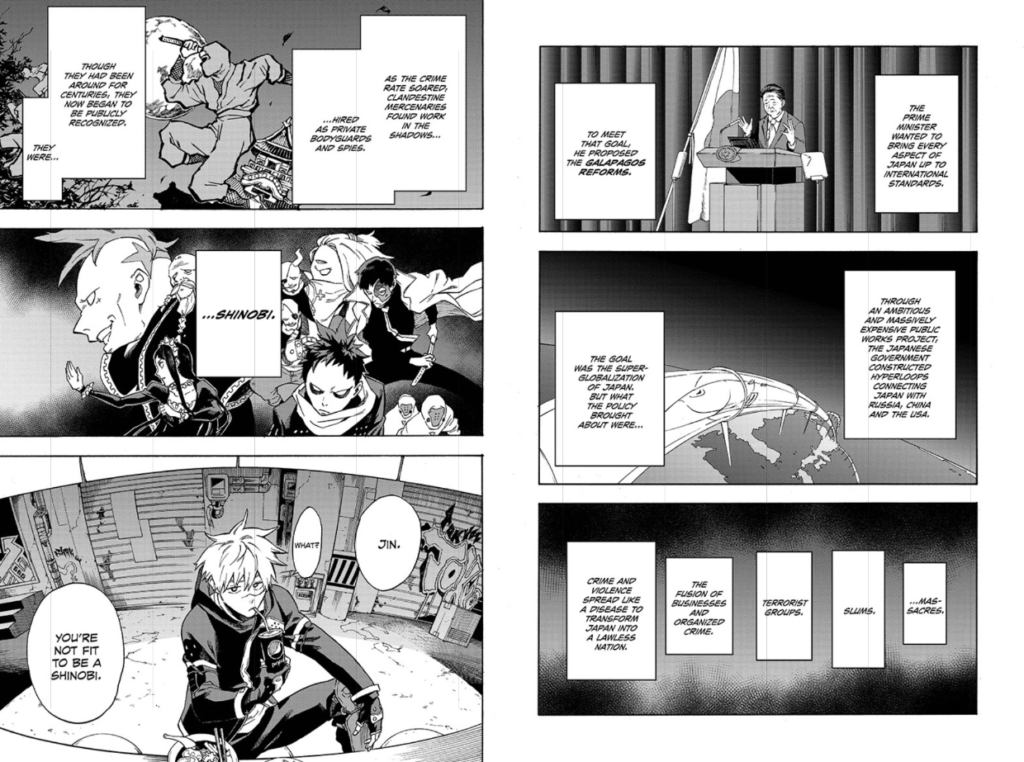 This direct ‘super-globalization’ facilitated mass immigration into Japan from all over the world, leading to poverty, misery, and crime in the dystopian cityscape that our story takes place in.

Tokyo Shinobi Squad’s characterization of globalization is worrying for many reasons. Firstly, it’s not exactly accurate. Globalization of trade, as depicted in the exposition at the beginning, doesn’t necessarily lead to mass immigration and widespread crime, for one.

You don’t have to look much further than modern Japan to find evidence of that. Japan is already a globalized trading partner – albeit through such initiatives as the G7 and APEC, not hyperloops – but it’s not exactly easy to immigrate here. Furthermore, Japan has one of the lowest petty crime rates in the world.

Of course, we don’t know what kind of effect the type of ‘super-globalization’ proposed in the story might have. Even so, the story’s equation of globalization with the downfall of society mirrors the talking points of many right-wing figures and ideologues over the years – who’s definition of globalization is inevitably tied up with racist, xenophobic attitudes.

This isn’t a uniquely ‘western’ phenomenon, either. The rise of far-right groups in Japan, known as ‘uyoko dantai,’ has been noted in the past couple of years – if not in direct electoral success, then in their more shadowy presence in various powerful lobbying groups who exert considerable influence on Japan’s current ruling LDP (Liberal Democratic Party).

It’s the influence of these groups that has led to controversies surrounding primarily the JSDF (Japanese Self-Defense Force) and the pacifistic constitution, but also the issue of comfort women and Japanese war crimes in general.

For me and many others, manga and Japanese media, in general, provide an escape. So for Tokyo Shinobi Squad to so clearly echo such destructive messages present all around the world at the moment is worrying, to say the least. 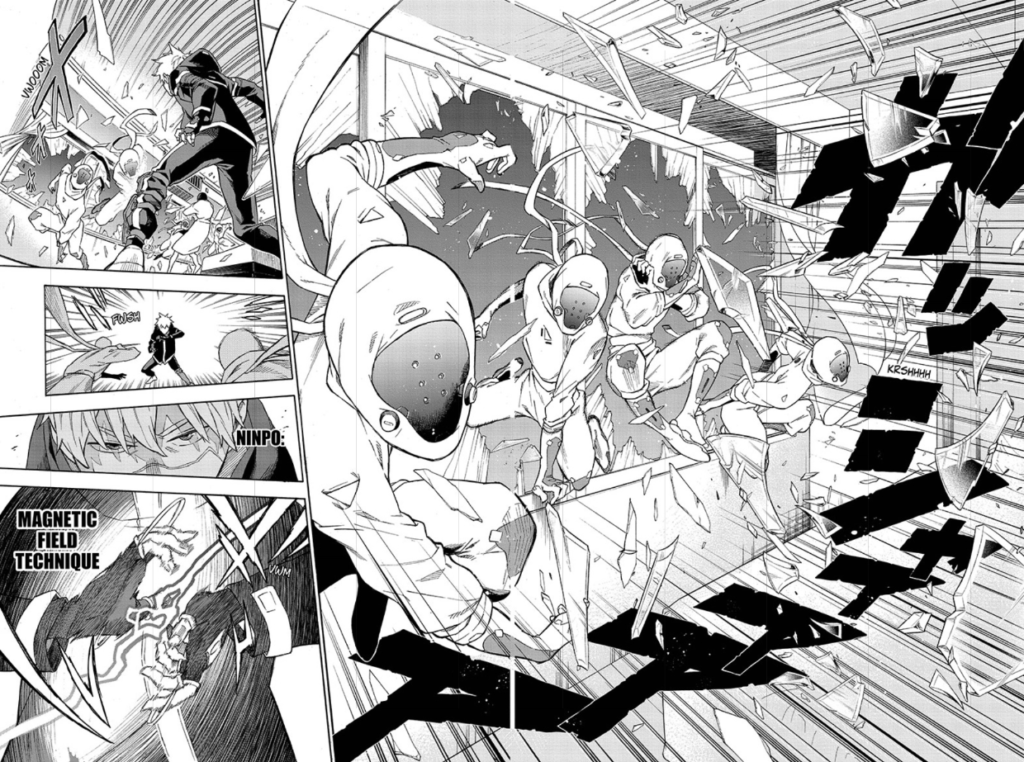 Yet, all of that worrying stuff is basically contained within the opening pages of the first chapter – in fact, it’s never really brought up again except to introduce the dystopian setting. So if you’re able to ignore these worrying messages, then I’m sure you’ll find be able to enjoy what is looking to be a fairly solid battle manga with an interesting power system and great art.

I’m also certainly not assuming the political stance of either Yuki Tanaka or Kento Matsuura. Rather, it seems more like author Tanaka wanted to use the term ‘globalization’ in order to keep his future Tokyo as realistic as possible – hence why Tanaka also decides to invoke the name of Justin Bieber when world building.