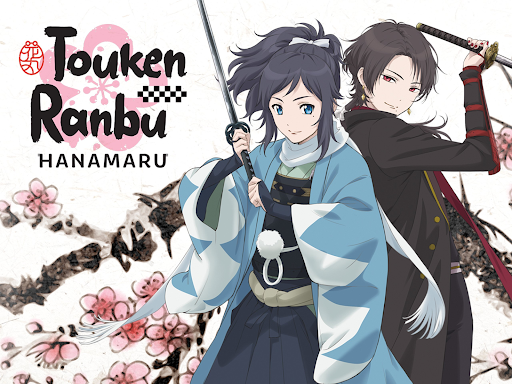 Whoever coined the phrase ‘the pen is mightier than the sword’ grossly underestimated the power of the internet, of thirst.

Whoever did the deed (an English writer by the name of Edward Bulwer-Lytton for those curious) obviously never came face to face with the likes of Japanese digital free-to-play card-collecting video game Touken Ranbu.

In 2015, developer Nitroplus of Fate/Zero fame and online publisher DMM Games came together to release a thirsty video game about famous historical Japanese swords being brought to life (in the form of very, very cute young men or Touken Danshi, ‘sword men’) a la Kantai Collection and Girls’ Frontline with the power of the player’s magic.

In fact, there are roughly two hundred of these swoon-worthy Touken Danshi in Touken Ranbu!

The original game-changing entry has since spawned an anime adaptation, stage plays, as well as a recent live-action movie that came out just last year on 18 January 2019.

However, this rapid rise in popularity and spin-offs began with the first of the franchise’s two anime series, Doga Kobo Inc.’s slice-of-life Touken Ranbu: Hanamaru (2016).

In honor of Touken Ranbu’s continued streak of success, I’ll be sharing my favorites of the swords-turned-samurai men and why I think they stand out.

I’ve always seen Izuminokami as Touken Ranbu’s ‘cover boy’ if his Nendoroid and the pure volume of related fanart are anything to go by. What can I say? Izuminokami’s fiery nature paired with his flowing hair and pretty primary colors just work.

The guy’s very easy on the eyes and represents a sword wielded by Vice-Commander Hijikata Toshizo of the Shinsengumi special police during the early nineteenth century. 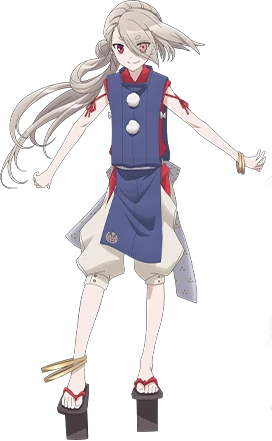 Imanotsurugi’s design screams ‘bouncy.’ The young man’s design is based on military commander Minamoto no Yoshitsune’s sword with which he fought and committed ritual suicide in the twelfth century.

I love the way the character design is literally elevated by his shoes, tengu-geta linked to Japanese demon-spirits or tengu. This combined with the rest of the Touken Danshi’s attire, an outfit built on imbalance, hint at him being more than he seems.

In spite of the sword’s less than ideal ‘end,’ Imanotsurugi is a free spirit whose unique hairstyle, puffy clothes, and contrast between hard edges and soft lines make for quite the memorable ‘child’ samurai character. 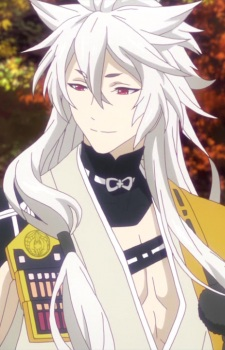 I wouldn’t say characters with animal traits are my go-to, but they do have a tendency to be designed for maximum appeal.

He has a friendly face and a gentle, albeit slightly smug charm that belie the dangers of his kitsune-inspired origins. Speaking of kitsune, the Kogitsunemaru is believed to have been crafted by swordsmith Sanjou Munechika of the tenth century with the blessing of a fox spirit.

And not just any fox spirit at that!

Like tengu-inspired Imanotsurugi, I love the way Kogitsunemaru incorporates Japanese folklore into his attire. The foxy guy is linked to the androgynous Inari Okami, the god of fertility and foxes who has long been considered the go-to for blacksmiths and warriors alike. 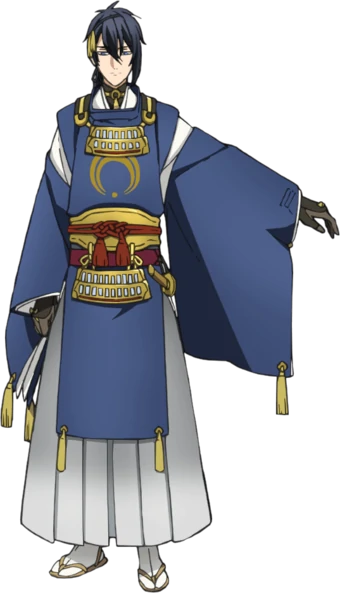 While Mikazuki is certainly handsome, he’s far from the only dark-haired, down-to-earth samurai in the Hanamaru cast. However, I think he makes for a perfect example of how clothes can truly make a man.

I adore the big crescent, tassels, and simple accents of Mikazuki’s outfit. They elevate him from good to great, as is to be expected from the same talent, Sanjou Munechika, behind Kogitsunemaru.

In addition, the easygoing Touken Danshi happens to be one of the Tenka-Goken, the ‘Five Heavenly Swords’ or ‘Swords Under Heaven’ considered National Treasures of Japan. ‘Mikazuki’ translates to ‘Crescent Moon,’ this namesake reflected in both the fictional man’s gorgeous clothes and the real sword’s curved pattern.

Like fellow Munechika-made sword Kogitsunemaru, the real Mikazuki was also believed to have been blessed by the god Inari. 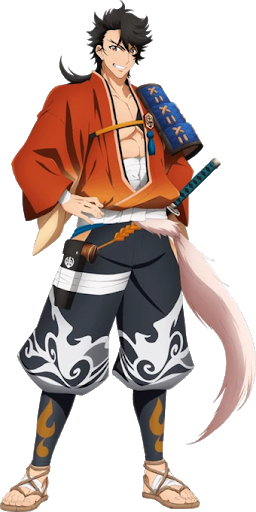 By virtue of its medium, Hanamaru helped breathe new life into a lot of the characters’ real-life equivalents.

Mutsunokami was wielded by samurai Sakamoto Ryoma of the nineteenth century and his contrast in colors reflects the man’s advocacy of modernization. Mutsunokami’s blue and red robe, the accents on his pants, as well as the ‘tail’ at his waist come together in a ‘wild’ ensemble befitting such a passionate character.

It helps that the show emphasizes his wide-eyed expressions and shounen vibes too.

But what I love the most about Mutsunokami’s design is how the contrasts in color and pattern evoke fire and water imagery, which could not be more fitting for his and ‘cover boy’ Izuminokami’s (another guy who balances blues and reds) tense dynamic. 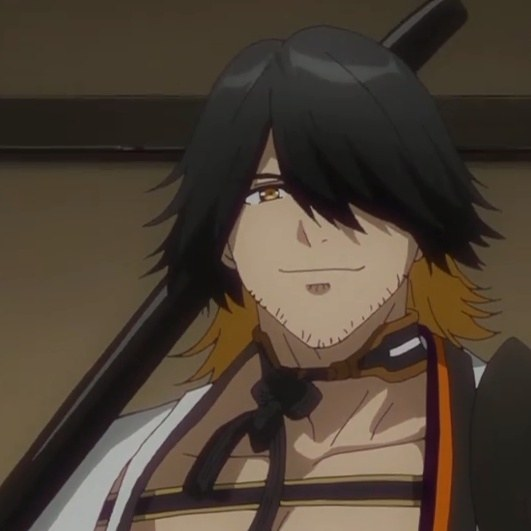 I’m going to be straight with y’all. Nagasone made this list because his design made me laugh. We don’t get nearly enough impractical male designs in fantasy, so needless to say, the guy and his straps are a welcome sight.

I also like that Nagasone isn’t your typical pretty boy. The guy’s on the rugged side, but not to the extent of making him feel overly intimidating.

The real ‘Kotetsu’ is a controversial weapon as its authenticity as a work of swordsmith Nagasone Kotetsu continues to be a subject of debate. 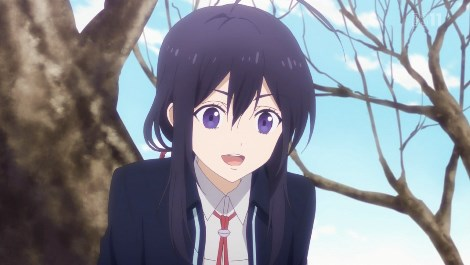 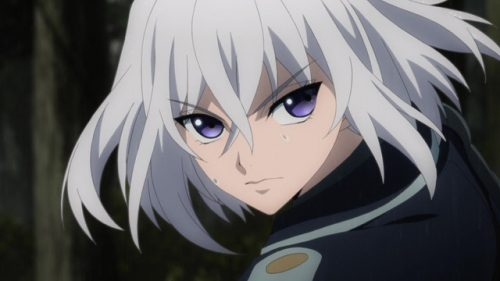 The ‘sibling swords’ Namazuo and Honebami were forged by swordsmith Awataguchi Yoshimitsu of the thirteenth century.

I’m a sucker for androgynous and/or effeminate designs in animation, so Namazuo and Honebami’s pretty looks are right up my alley. I love how their color schemes contrast with each other, just as their personalities do.

While Namazuo is outspoken, Honebami keeps to himself and seems to be more in the know of the traumatic memories (and there lack of) of their shared past. 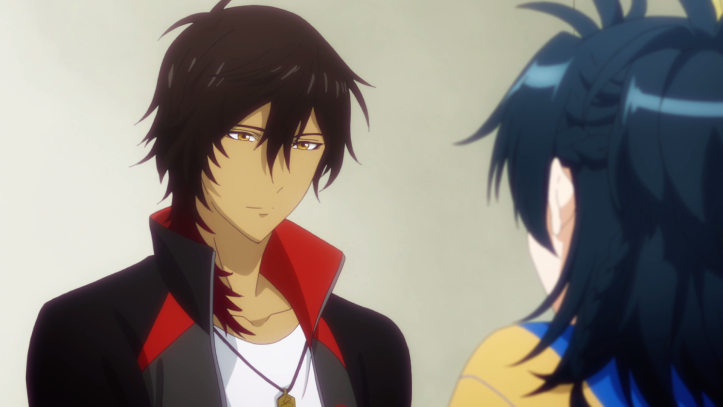 Ookurikara was crafted by a swordsmith by the name of Hiromitsu and proves a steady, stoic man befitting his ‘lone wolf’ trope. From a design perspective, Ookurikara’s attire is on the modern side even outside of Hanamaru which I found quite interesting.

The solemn guy is a close friend of our next entry as the two real life swords are linked to one-eyed ruler and warrior Date Masamune of the sixteenth to seventeenth century. 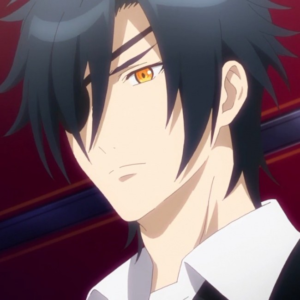 And last but not least on this list is Shokudaikiri.

And yes, the man’s Date Masamune-inspired eyepatch does things for me.

It’s a simple accent that does wonders for the character’s design and speaks to the real sword made by perhaps the most famous smith in Japanese history, Mitsutada, and its mythic reputation.

Sure, one may argue that a character’s design should enhance said character by telling us something about him or her at a first glance, but ‘gap moe’ is a thing for a reason.

Which is the reason why I ultimately picked this Touken Danshi over the less easygoing Tenka-Goken Oodenta Mitsuyo.

You know what? I’ll throw in Yamatonokami Yasusada for good measure, considering his own respectable ‘cover boy’ status.

Being the ensemble slice-of-life (ha) it is, Hanamaru doesn’t follow a set protagonist, but the former and the equally dashing Kashuu Kiyomitsu are the closest to being traditional leads.

Like Izuminokami, Yamatonokami also boasts a larger scale Good Smile figurine on top of a Nendoroid.

And looking at his clean design and pretty face, I can see why.

At a first glance, I thought Hanamaru would be akin to the anime adaptation of reverse harem-centric romance/supernatural video game Kamigami no Asobi.

In fact, I thought Yamatonokami was a stand-in for the female avatar/player character.

As it turns out, Touken Ranbu ain’t that kind of anime or video game.

Despite having the perfect set-up for a boys’ love-lover’s paradise, Hanamaru is played surprisingly straight. And not the reverse harem type of ‘straight’ either. The show isn’t about the Touken Danshi falling for a human girl. No, it’s more so about them adjusting to their new lives as, well, living beings and protecting history from supernatural outliers.

In this regard, Yamatonokami’s soft features work well to make him feel approachable. With his fluffy ponytail (complete with bow), scarf, and sleeves rolled up, the young man looks just as ready to lend a hand as he is to slice a monster in two.

Now that I think about it, swords-turned-samurai men wielding swords of their own is a bit…out there. Not the weirdest premise out there, mind you, but the ‘fun’ kind of weird nonetheless.

In terms of background, the historical Yamatonokami blade was supposedly created by a swordsmith of the same name during the seventeenth century. This blade as well as fellow sword Kashuu were both wielded by the legendary Captain of the Shinsengumi Okita Soji (who starred in many an anime, drama, and video game).