If my aims with this column are to increase understanding of the Japanese film industry, it helps to understand some of the country’s biggest films and series and explore what made them so successful upon their release (and helps them to remain so resonant to this day). Finding an appropriate time to discuss these films when there are other topics to discuss is, however, an issue. Yet, with the beloved Tora-san series (also known as Otoko wa Tsurai yo, 男はつらいよ) making a return to cinemas these past weeks, now seems a perfect time to do exactly that and explore this series’ storied legacy. It holds the record as the longest-running film series in the world, the latest movie only serving to extend this record further. Because of this, I want to use this column to discuss the history of this series and the most recent film’s attempts to revive it following the lead actor’s death two decades prior.

Let’s celebrate this famous and influential series as its 50th-anniversary celebrations come to a triumphant end.

What is Tora-san (Otoko wa Tsurai yo, 男はつらいよ)?

Torajiro Kuruma, born in Shibamata, Katsushika, Tokyo, yearns for the opportunity to settle down near his family yet never does. Within each film, he returns to his family to reunite with them after a time apart. A woman would enter his life, and it may at first seem like they will settle down together until circumstances keep them apart and he hits the road once again.

None of the film’s are overtly complex, but this was never the point. The movie series mainly came about in response to the collective cries of support for the main character after their death at the end of the TV series Gukei-Kenmai. Played by actor Kiyoshi Atsumi for the TV series and in every movie thereafter, adoration for the character, and in turn, the actor himself, drove the movies to unparalleled success.

Tora-san’s character is simplistic, straight-minded, yet kind and caring towards others, almost to a fault. He may make a fool of himself and others, but it is always with good intentions, and it makes the character impossibly endearing. You can’t help but root for the character and be whisked along by the ups and downs of his life as he tries (and often fails) at anything and everything, including romance. He’s a character you can laugh and empathize with, becoming attached as you learn more of his life. It’s no surprise that the movies were popular, often being some of film studio Shochiku’s top earners.

Over the course of the 48 films released on a twice-yearly basis between 1969 and 1995 (every summer and New Year’s), Tora-san goes on countless journeys and we see both him and his family grow, age and mature. In the first film Tora-san’s half-sister, Sakura, gets married, and over time we get to see this child grow and mature. His nephew becomes a college student by 1995 too (incidentally, this character is the focus of the movie’s newest installment). Tora-san’s family became the nation’s family.

His character, meanwhile, is a callback to the past. The family Tora-san yearns for is one of a multigenerational household in charge of a small family business. This type of household was already on the decline by 1969 and only continued to fade away over time. The setting of the film, too, is designed to evoke nostalgia; although the period these characters live within is designed to mostly evoke modernity, this is ambiguous with many callbacks to Japan’s past. His demeanor and views on life equally resemble a historical Japan, while the neighborhood community it centers upon was out-of-step with the rapid urbanization and globalization the country was experiencing upon the series’ debut.

That was part of the series’ appeal, however. Between this, the work of director Yoji Yamada, who worked on all but two of the installments within the series and the talent of Kiyoshi Atsumi, the series’ broad appeal and nostalgic underpinnings made it a hit nationwide.

Unfortunately, the story of the series’ initial conclusion is a tragic one. Tora-san was never able to settle down, with his life left ambiguously open at the end of a 48th installment widely expected during production to be a finale following Atsumi’s battle with cancer. With the death of the actor, it was never considered that another could replace him, and a final script was reworked into the film The Man Who Caught the Rainbow (虹をつかむ男) before the series lay dormant.

How do you continue the story of a character with an irreplaceable main actor over 20 years after his death? You don’t.

The focus of the story is instead placed onto Tora-san’s nephew, Mitsuo, a successful novelist played by Hidetaka Yoshioka as the character reaches middle-age. The character has a teenage daughter and is reconsidering his life following the death of his partner. At a book signing, he reunites with a former girlfriend from high school who now works at the United Nations, and they begin to reconnect. 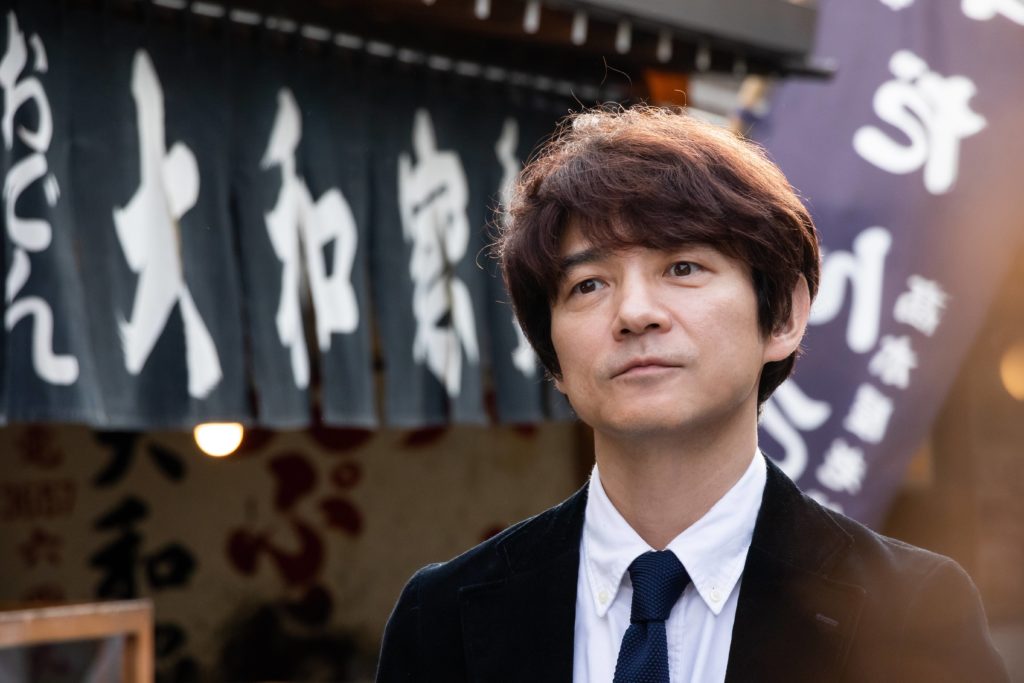 Although Mitsuo is the focus of the story out of necessity, Tora-san’s presence, as well as consideration of the series’ legacy, is ever-present throughout the philosophy driving this work. Hidetaka Yoshioka isn’t just an actor taking up the role all these years later but a man returning to the role he played as a child as both he and his character matures. Many of the central cast from the original series return, too, including Sakura, Tora-san’s half-sister, and the movie acts as a reunion of sorts due to that.

To incorporate the late Kiyoshi Atsumi into the film as Tora-san, remastered archival footage is interspersed into the film. How well this effect is achieved is something I’m unable to judge having yet seen the movie for myself, although the positive reviews the film has received from advance screenings at places such as the Tokyo International Film Festival suggest it has succeeded at this goal, allowing the comedic charms of Atsumi to shine.

Welcome Back, Tora-san released in Japanese cinemas on December 27th 2019.

During the creation of this column, I’ve had the opportunity to watch the first four films in this long-running franchise, and out of all of them, I feel the second is the best choice to recommend to series newcomers.

I had difficulty deciding which of these early entries into the series I could recommend for multiple reasons. While none of the films are bad, it’s difficult to commit to watching the series due to its length (even if entries are disconnected and you could watch any entry in any order). There’s an easy argument to make about watching at least some of these films for their historical importance, but why engage with them beyond that?

For this reason, I would personally recommend the second film in the series, Tora-san’s Cherished Mother: it’s perhaps the best early entry at exemplifying the series’ mass appeal, while also having the most to offer for a viewer not invested into the series and its long history. Tora-san is an easy character to empathize with, and this second film exploits this with a deeper look into the character’s childhood and the identity of their long-lost mother.

Tora-san’s Cherished Mother pushes the romantic elements of the series mostly to the side in order to tell a story focused on the rediscovery of lost familial ties while doubling down on the importance of keeping family close which dominates the series’ core identity. Admittedly the more serious moments can feel a bit melodramatic through an overemphasis on comedy which blunts these solemn moments, yet this is mostly balanced out by Atsumi’s strong acting performance. While the first film made me respect him, this movie is perhaps the one where his skills as a comedian and actor became most apparent to me, with serious acting skills complementing his comedic talents.

A flawed movie, and not a classic in the vein of other classic Japanese films or even other work by director Yoji Yamada, but an easy and strong introduction into the Tora-san series nonetheless.

The Tora-san series has become much more accessible to international viewers in recent times. A DVD set containing the first four films was released in the US a decade ago by AnimEigo, although this collection has long since become a collector’s items following poor sales. While those with access to Japanese streaming services can stream every film from the franchise on Netflix or Amazon Prime, all is not lost for international fans who want to dive into the series for the first.

In 2019, every single entry in the long-running series was released on Blu Ray, using a 4K digital restoration that had been created from original film prints. Each of these releases includes English subtitles that had initially been produced for DVD releases of the films made for the series’ 40th anniversary but have also been made available. Each movie is available on Amazon Japan for roughly 2300yen ($20) per movie, making these releases an affordable entry-point into the franchise. If however, you want to take the leap, a much more expensive collector’s edition set containing every single movie, including Tora-san’s Cherished Mother, is also available.