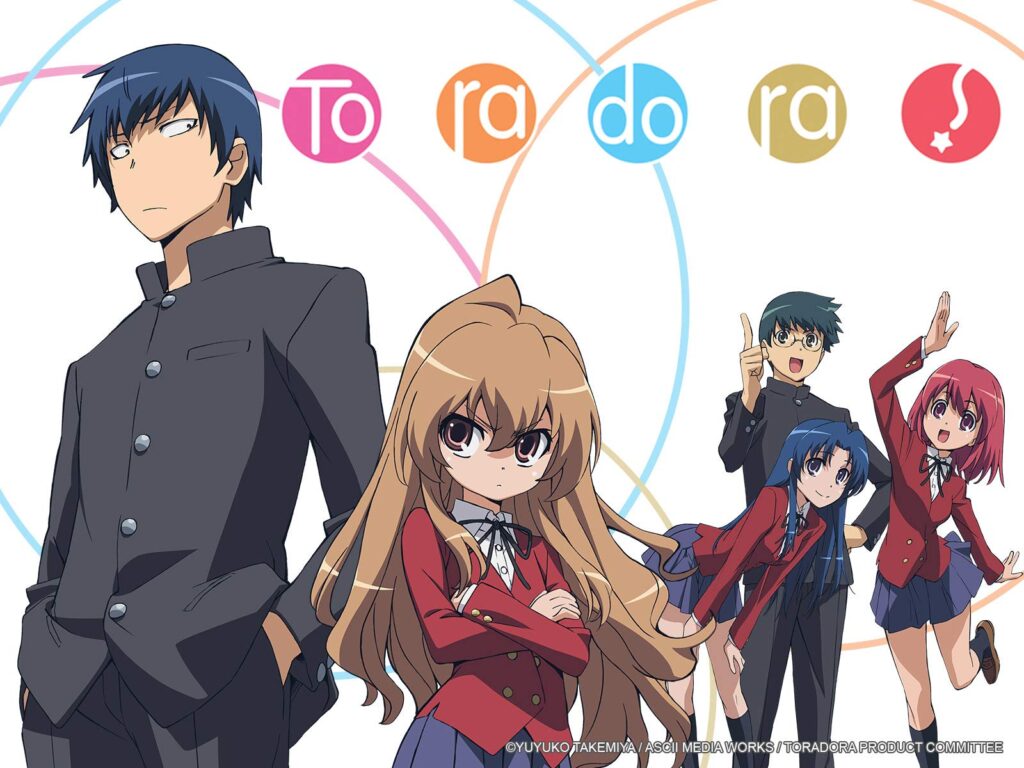 Toradora came out in a time when anime was in a bit of a transitionary period; Finally, the medium was understood as something that wasn’t specific to Japan anymore, with a huge worldwide fanbase with access to high-speed internet that thanks to the push in streaming allowed fans in the States, Brazi, or anywhere else to watch a show the same day it came out in Japan.

The high degree of experimentalism and odd concepts that were prominent in the 90s and still somewhat present in the early 2000s in shows like Ghost In The Shell: Stand Alone Complex and Haibane Renmei were being passed up for shows with a moe charm that was more easily marketable.

Along with the likes of Clannad and Steins;Gate, Toradora was one of the best of these shows.

Based on a light novel series written by Yuyuko Takemiya, who also penned Golden Time, Toradora’s twist on romance was pretty clever; Instead of giving us two characters who fall in love, Taiga and Ryuji develop an abnormally close platonic friendship based on the two helping each other in their respective romantic escapades with Kitamura and Minorin, respectively. Then you throw in the scornful fighter Ami Kawashima and all hell starts breaking loose.

Despite being a ‘romance’ anime, any lovey-dovey stuff plays second stage to character development and relationship nuances floating around. What happens when Taiga’s dad steps back into the picture of a multi-year absence and how does Ryuji’s never having a dad influence his thoughts on the matter? What happens when characters become aware of feelings they didn’t think they had or feelings they stopped having somewhere along the way?

Toradora isn’t the story of two weirdos falling in love with some trials and tribulations along the way. It’s the story of a bunch of weirdos coming together, growing up, and realizing what they really want. 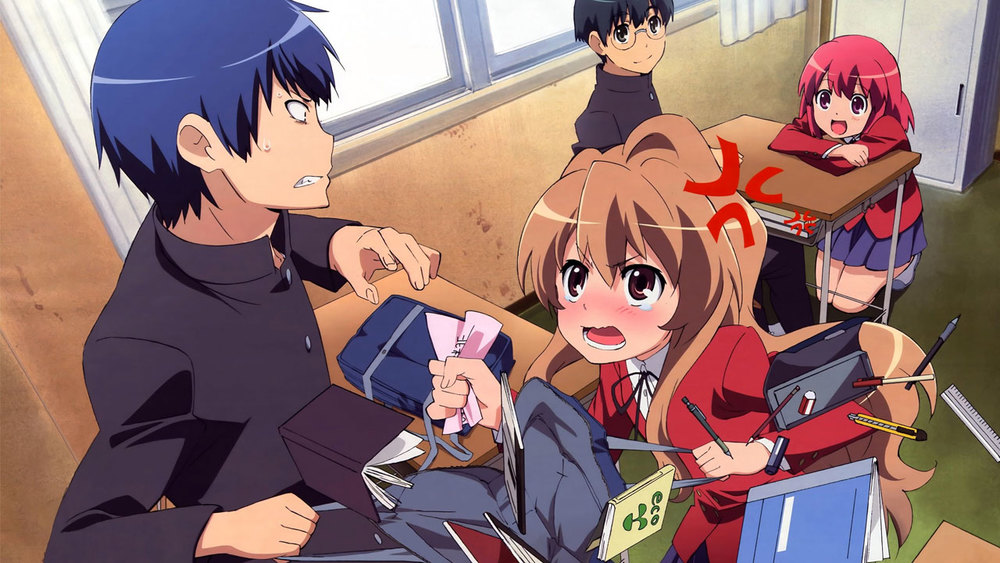 No Need for a Toradora Season 2.

As much as we all want to spend more time with Taiga, Minorin, and Ami, Toradora was a one in done experience. The show has a perfect beginning, middle, and end, without any possible additions to the story that could really make for a meaningful contribution to the experience. For these reasons, we never got a Toradora season 2 and arguably have been better off for it, even if we do miss Taiga and co.

The same writer and director team that made Toradora went on to do Anohana, Anthem of The Heart, and Mobile Suit Gundam: Iron Blooded War Orphans if you need another dose of warmth and heartache.

You Can Probably Skip the Toradora Manga.

Both the Toradora anime and manga are adaptations of a lengthy light novel series. Somehow, perhaps largely due to the help of the at the time fledgling but now landmark screenwriter Mari Okada, the anime was the perfect distillation and presentation of everything the novels had to offer. The manga, on the other hand, does a perfectly good job of telling Taiga and Ryuji’s story but doesn’t offer it up with the same flare as the anime version.

You can read it if you really want to, but if you’ve read the books or have seen the show, it may not be worth the time. 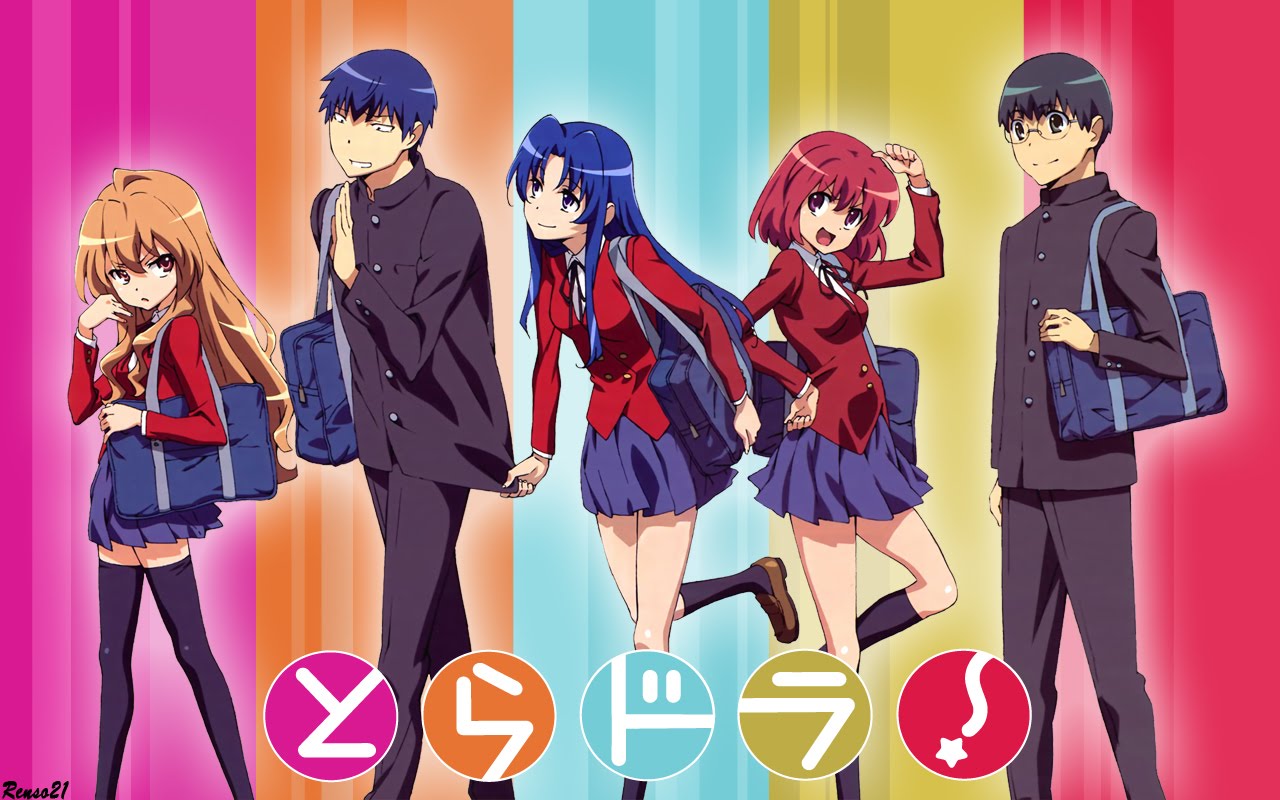 One Charming Cast Of Characters.

When it comes to Toradora, it’s truly hard to pick a favorite among the gang so well defined they feel like your actual friends. All five of the main cast are so filmed to the brim with personality, each making every scene their own, that they’re all a joy to spend time with for every second of the show. Here’s why each of the main cast has permanently endeared themselves to us.

One of the most iconic Tsundere’s of them all, the notorious palmtop tiger with a legendary temper, and the star of the show; Taiga Aisaka packs a lot of punch in her small frame with nothing but a wooden sword at her side. She gets riled up really easily and is unable to put on a fake face to appease the world around her, which ends up being one of her most enduring qualities. Living alone and unable to cook for herself, she practically jumps at the chance to become a major player in the life of her modest neighbor Ryuji.

Dealt a rather moderate hand in life, Ryuji has grown up essentially taking care of his single mother Yasuko and he was born with a face with a scowl that turns people off regardless of how he acts. Ryuji becomes a natural fit as Taiga’s accomplice, as they bond over the crappy cards life handed out to them and try helping each other’s romantic conquests. While he harbors a serious crush on Minori and starts taking slow but concrete steps towards that end, at the same time his unique friendship with Taiga intensifies very quickly.

Neither of them knows where this one-of-a-kind platonic relationship will take them.

An absolute oddball and the object of Ryuji’s affection, the often referred to as Minorin adds a lot of gung ho to Toradora’s already abundant charm. Despite being something of a space cadet at times, she’s a very hard worker who takes part in multiple school clubs and keeps up with a part-time job or three in her spare time.

She’s over-protective of Taiga whom she considers being a close friend, so much so that it can impair her judgement when it comes to what’s best for the palmtop tiger.

Ami’s an up-and-coming model sensation and when you first meet her, she puts on an over-sociable face to avoid trouble and comes across as more mature than her fellow classmates.

Truth is, underneath that ‘airhead’ exterior is a vicious, often disagreeable, and sharp-tongued young woman tired of taking anybody’s shit. A different brand than Taiga’s more classic tsundere, Ami knows exactly how she feels about the people around her and the calculated mean-spirited is a part of her charm.

In most romance anime, the secondary male best friend character is played up for comic relief and maybe gives an emotional monologue to support the protag here and there. As an eccentric Yusaku Kitamura can be seen doing these things for sure, but there’s so much more to him as a character than being second fiddle to Ryuji. Contrary to convention it’s Yusaku who’s the student council vice president, a childhood friend to model sensation Ami Kawashima, and generally the wisest of the group.

Toradora and the Romance of the Three Queendoms